These Bacon and Cheese Potato Skins are great as an appetizer or snack food for game nights and even as a tasty, savory side dish! 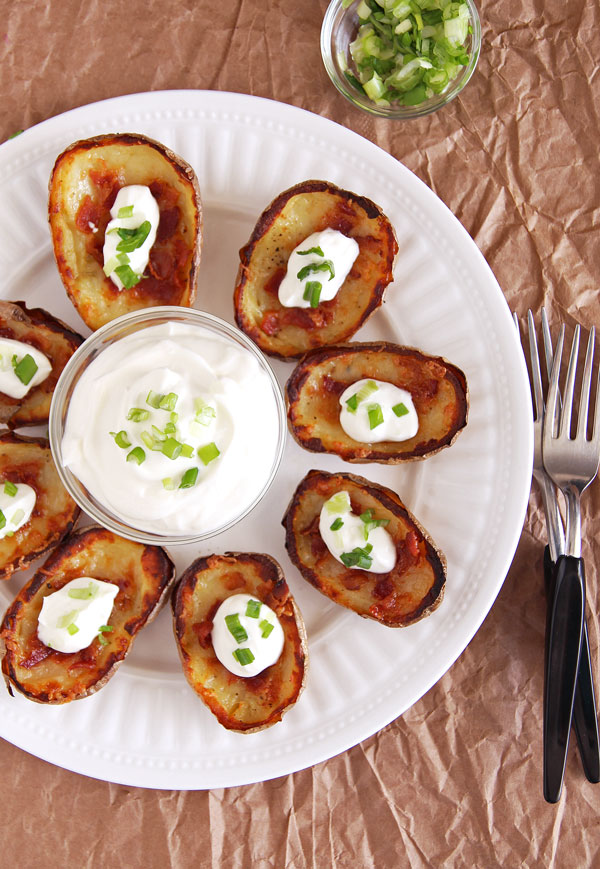 Alright guys…hold on tight! Can you believe that I’ve never actually had potato skins up until our last night in Paraguay?

I don’t know how this happened – I mean it’s classic pub grub. Well, probably because I don’t usually hang out in pubs or bars. Definitely more of a coffee shop hang-out kinda girl. If you’ve followed me for any decent amount of time, you definitely know this by now.

On our last evening in Asuncion, Paraguay, we planned to have dinner at a much-recommended local eatery. However, once we got there, there was not a single free table and we didn’t care enough for the atmosphere to wait it out. We also were soo hungry…

T.G.I. Friday’s To the Rescue!

Thankfully, right across the street was a T.G.I. Friday’s, which I hear is an American restaurant chain. To me, it was novelty enough to be excited about trying it out. The menu pointed to the restaurant’s fame for their potato skins, so of course we had to taste for ourselves to see what it was all about. 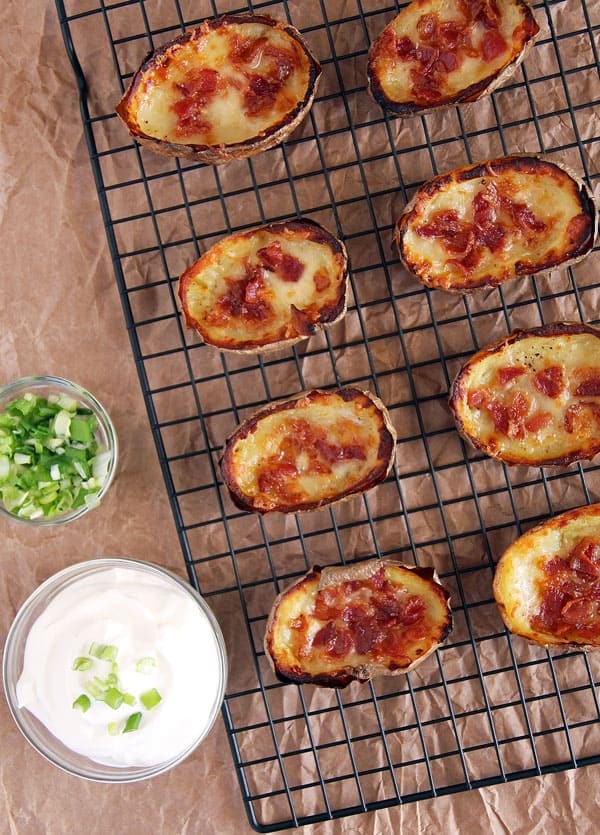 We absolutely LOVED the potato skins. I mean – really, what’s not to love about crispy, buttery potatoes with bacon and cheese and a green onion sour cream dip to round it all up.

OF COURSE I had to find a way to make these wonder potatoes at home – and the result wasn’t lacking anything behind the restaurant original.

For now, we move on to the last stop of our Paraguay vacation. I love sharing our trips with you, and pregnant or not, I’m going to make sure you have a recipe to read and some cool vacation shots to enjoy. And so, without further ado… 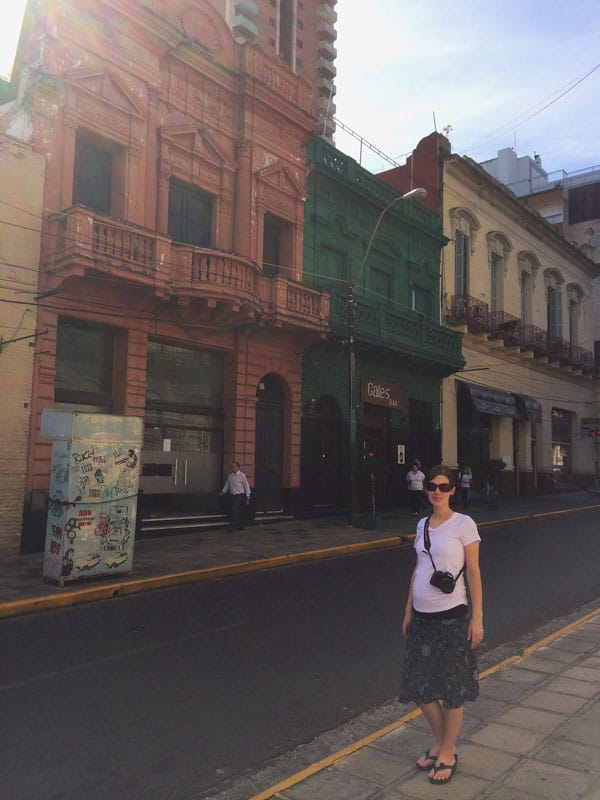 After our visit in the Gran Chaco (in the middle of nowhere), we returned to Paraguay’s capital of Asuncion for a few more days of relaxation and to explore the city. 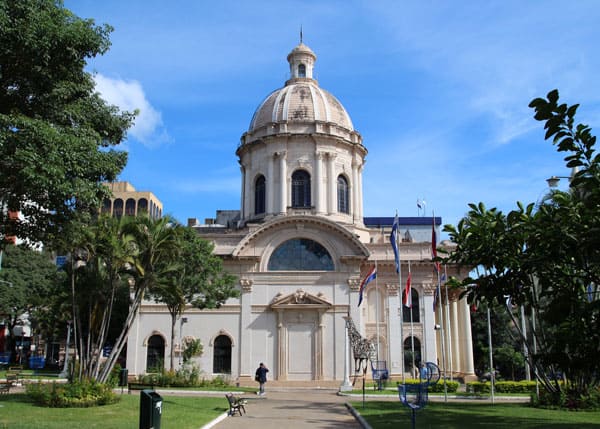 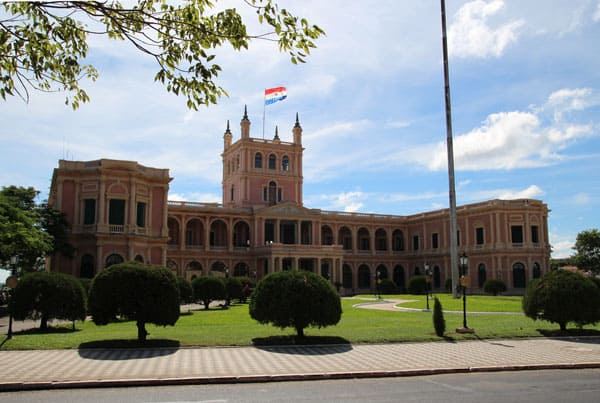 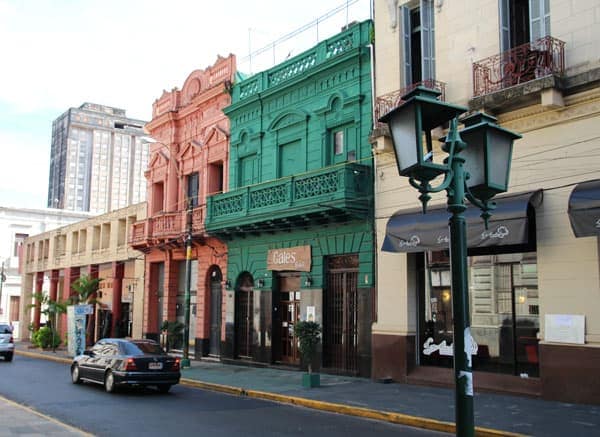 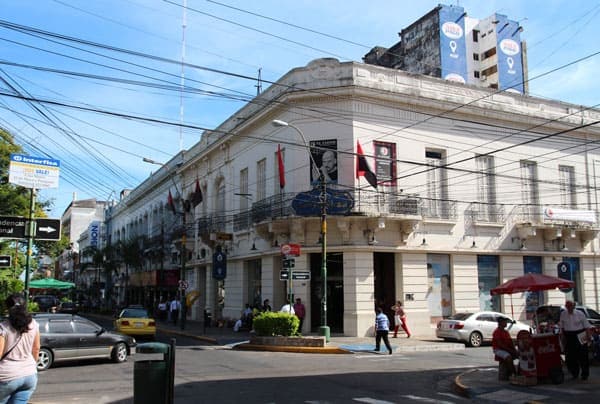 The downtown core was easy to explore on foot. I was in love with the historic buildings and the city’s liveliness. So many people where out and about on foot like us, and street sellers had everything from food and drinks to movies + music and clothes on offer. The quantity was staggering! 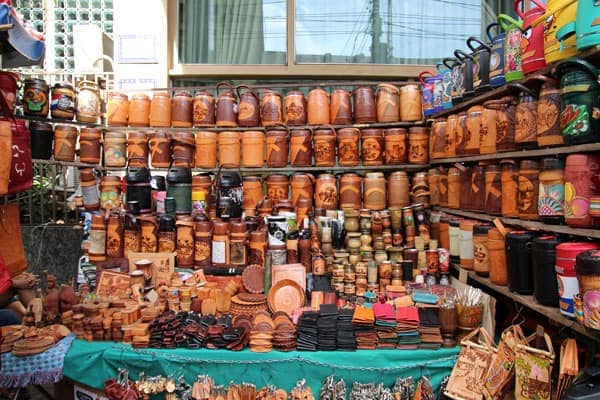 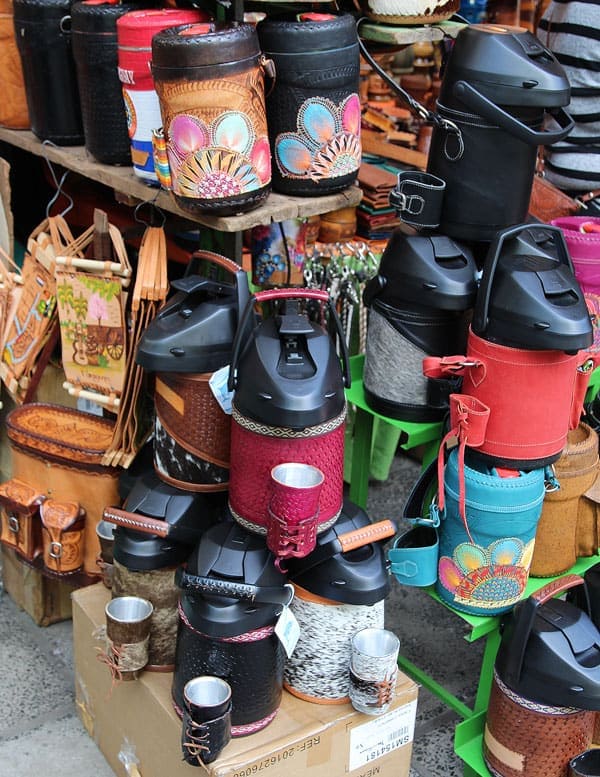 All these fancy thermoses were most interesting to me. They are for drinking yerba tea, either hot as mate or cold as tereré. Drinking the tea is a shared community experience that we could observe at every street corner.

The tea leaves are filled in the small cup with a metal straw. Then the cup is filled with hot or ice water and passed around in a circle while regularly being topped up with water. A curious sight to see for me as a visitor, but I guess it is a great way to encourage to stay hydrated in this warm climate, as well as staying well-connected to your neighbors. 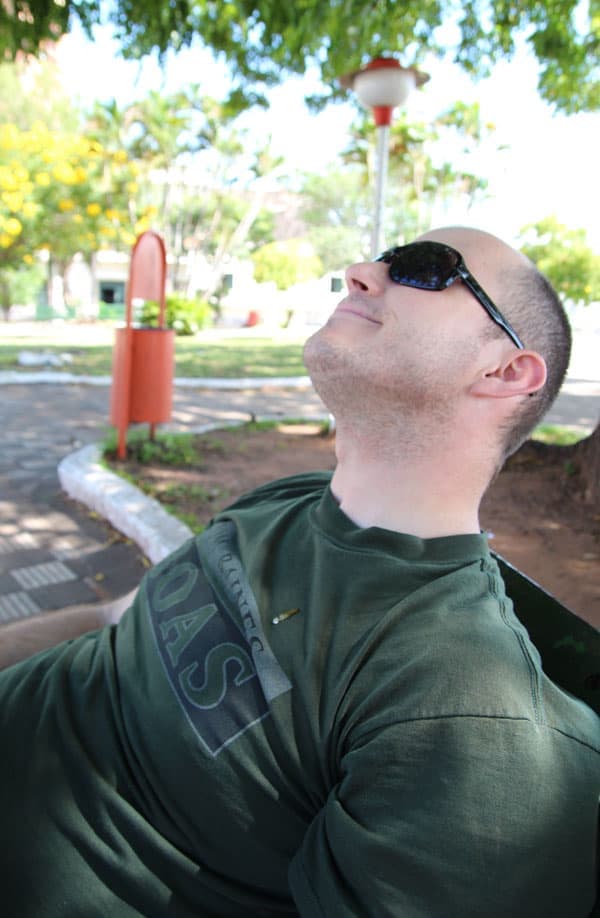 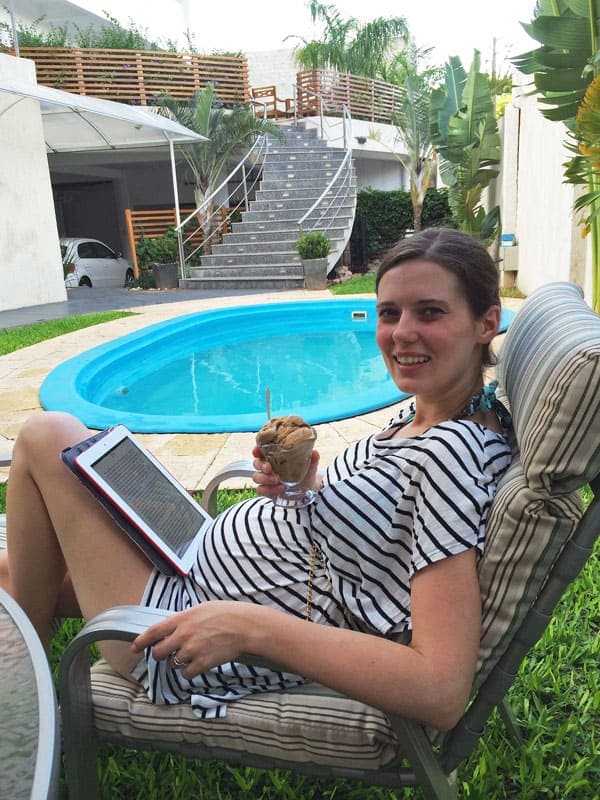 Plenty of relaxing and reading by the pool to finish off our vacation. Can you believe they had Dulce de leche ice cream?! 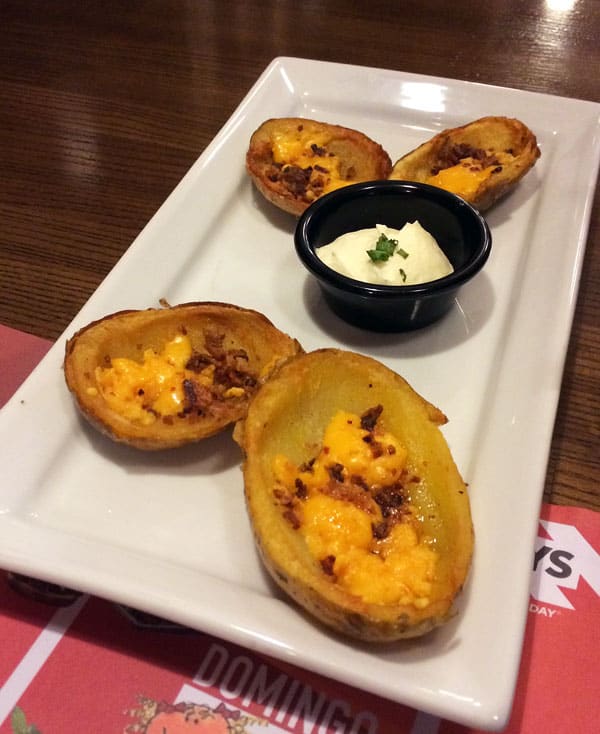 And these potato skins from our last dinner in Paraguay at T.G.I. Friday’s inspired today’s recipe. 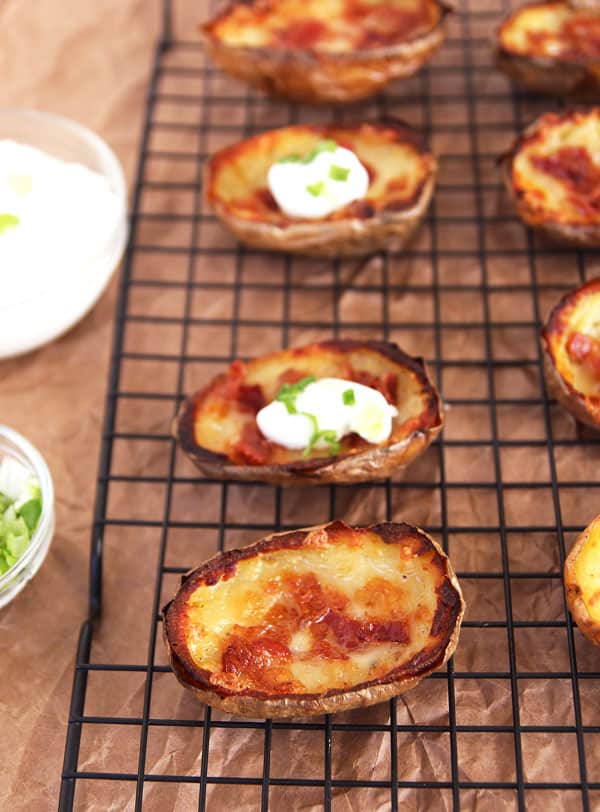 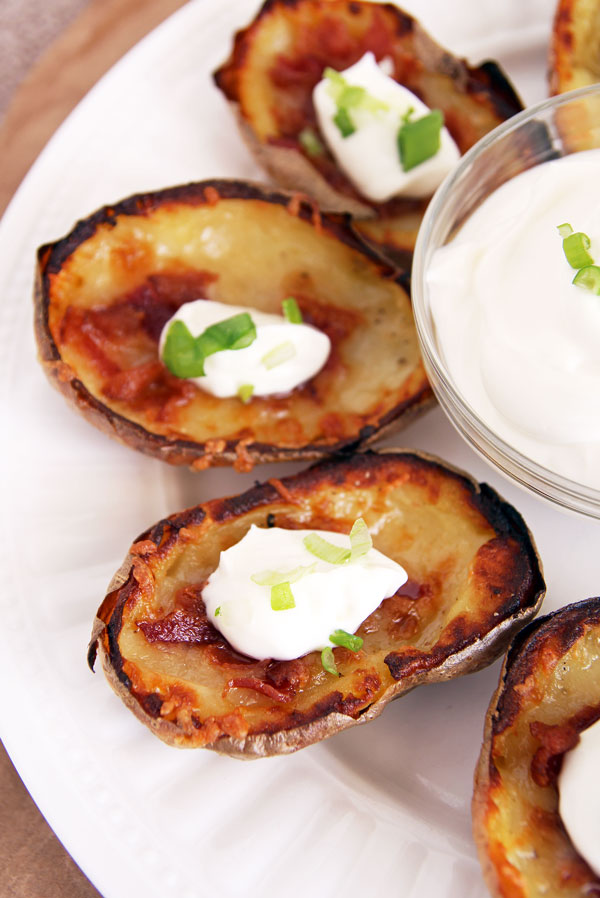 The potato skins are great as an appetizer or snack food for game nights and even as a side dish. Enjoy the spoils and get snacking! 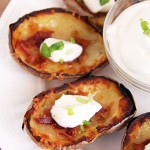 These bacon and cheese potato skins are great as an appetizer or snack food for game nights and even as a tasty, savory side dish!