This chicken fajita pasta recipe features chicken thighs, onions, bell peppers, tomatoes, and fajita seasoning. It is also made in one pot which makes cleanup easy. 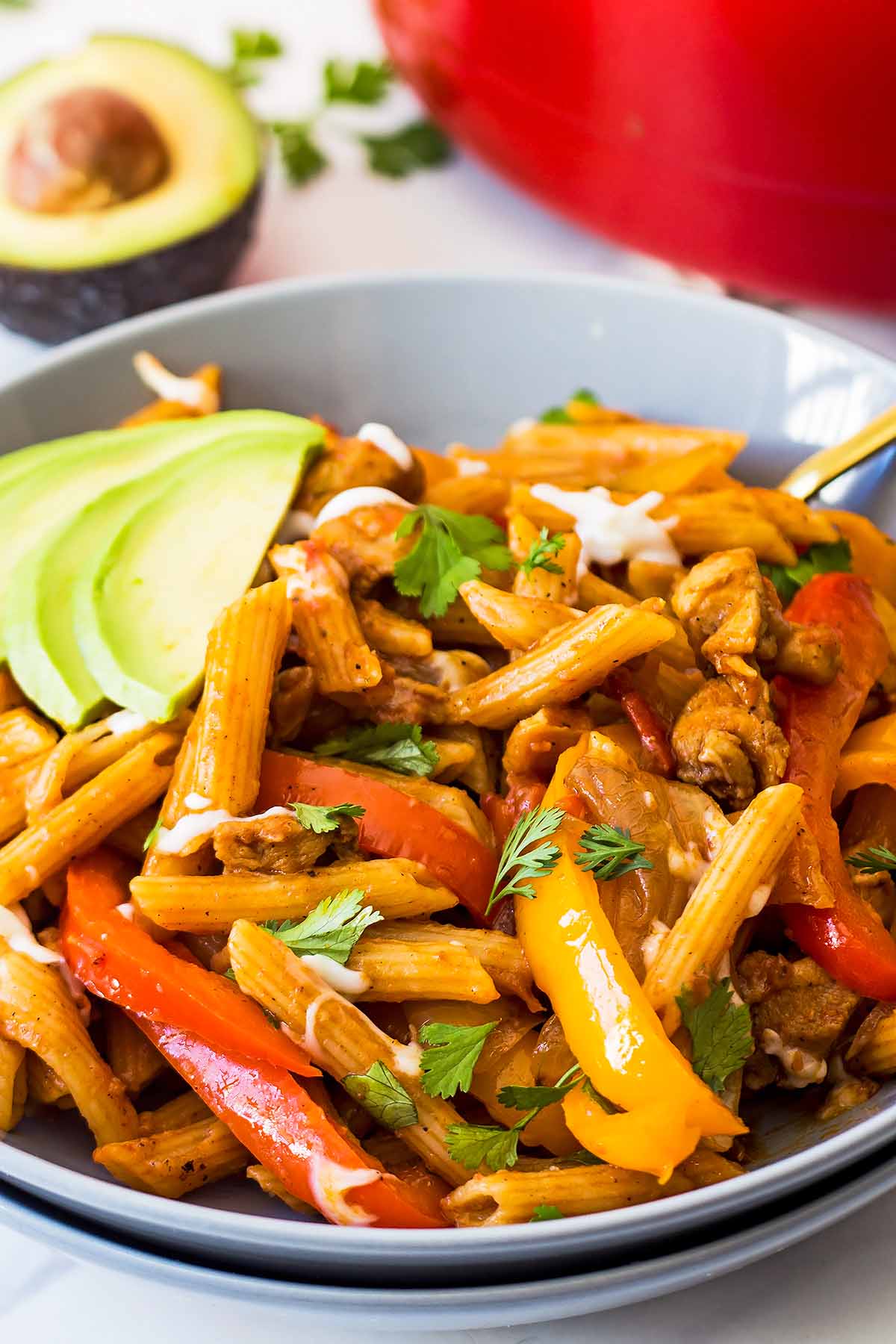 What is Chicken Fajita Pasta

This chicken fajita pasta makes a remarkable dinner on a weeknight since it is easy to prepare and includes only one pot. Basically, this pasta recipe includes traditional fajita filling of chicken, peppers, onions, and fajita seasoning tossed with pasta rather than being stuffed into tortillas as with chicken fajitas.

For the pasta, a shorter cut works the best to ensure that you get mouthfuls of both pasta and veggies in every bite. Some possible choices include shells, macaroni, fusilli, penne, bow ties, and more. You can also use regular, whole wheat, or gluten-free pasta as you desire. All will work well in this pasta recipe. 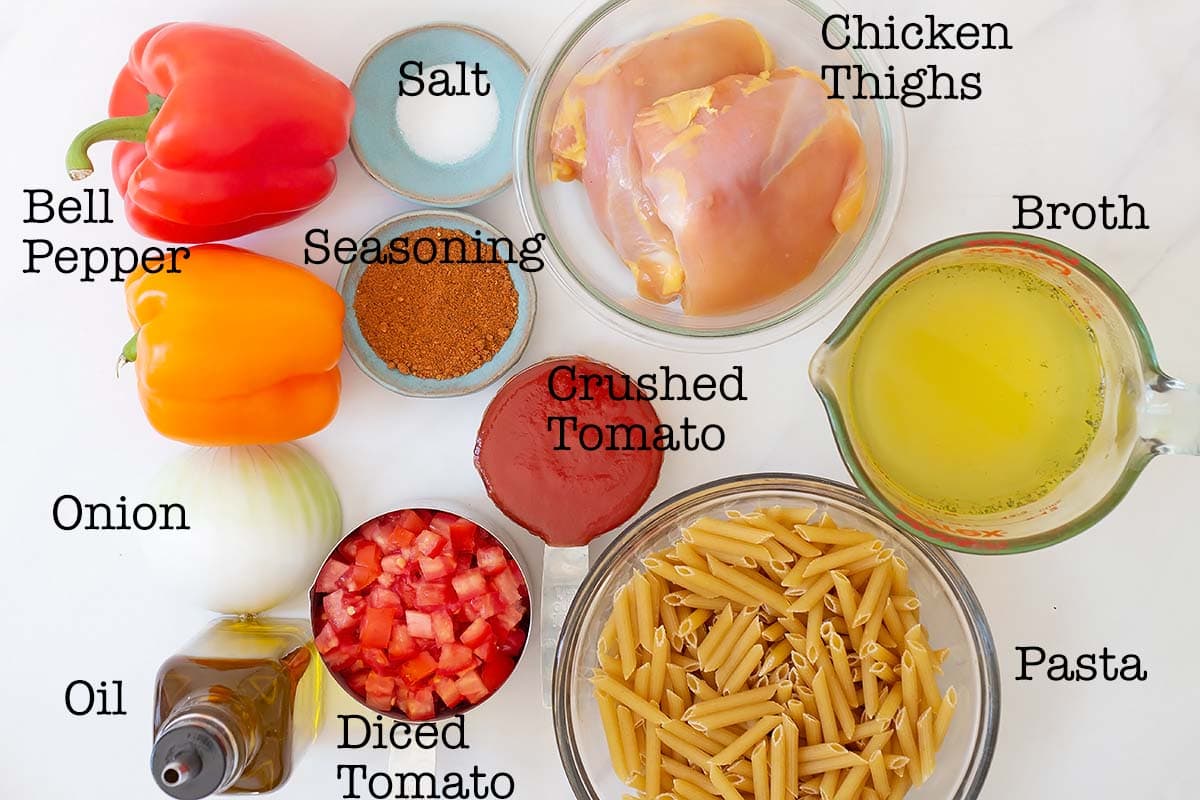 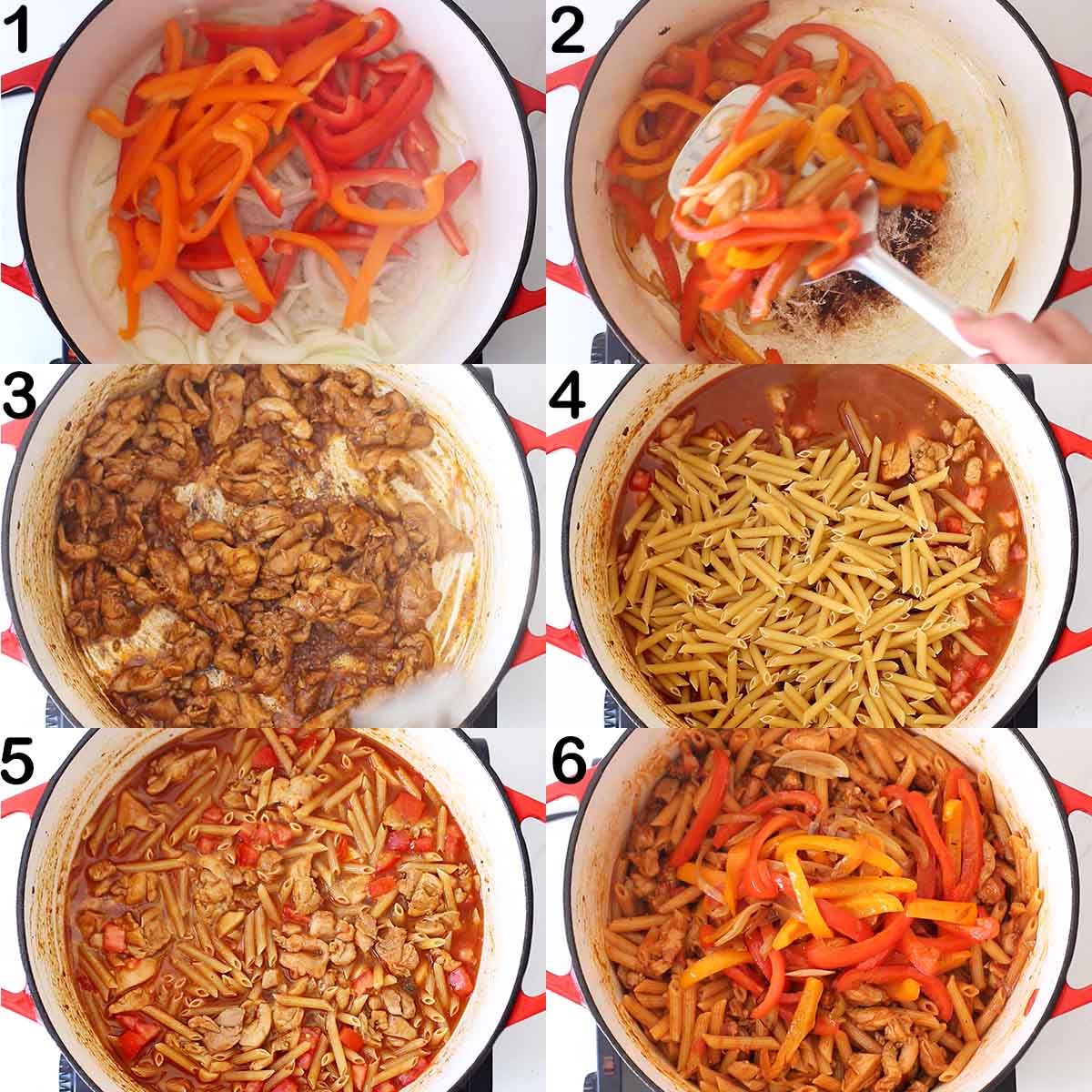 How to Make Chicken Fajita Pasta

1. To make this pasta, you should begin with either a large pot or Dutch oven. Simply heat half of the oil in the pot and then brown half of the bell peppers and onions until well coloured and cooked through. You can use whatever peppers you like. Consider trying a mixture such as green bell pepper if you like some earthy flavour, and red, orange, and yellow peppers for a sweeter flavour.

2. Then remove the sautéed onion and bell peppers from the pot and set aside.

4. Next, add the chicken broth in order to pull some of the charred bits from the bottom of the pot as this will add flavour to your sauce. Also add canned diced tomatoes or fresh chopped tomatoes and tomato puree along with your choice of pasta.

5. Stir and make sure most of the pasta is immersed in liquid. Then, cook the mixture over medium-high heat just until the pasta is al dente and the flavors have mingled. Depending on the type of pasta you are using, the timing will vary, but it should generally take between 8 and 13 minutes. Just follow the package directions for your particular pasta as a guide for timing. Then, you can taste the pasta as you boil it until it is perfectly al dente.

6. Finally, stir the onion and bell pepper slices back into the pot. Along with some optional shredded cheese and chopped cilantro. 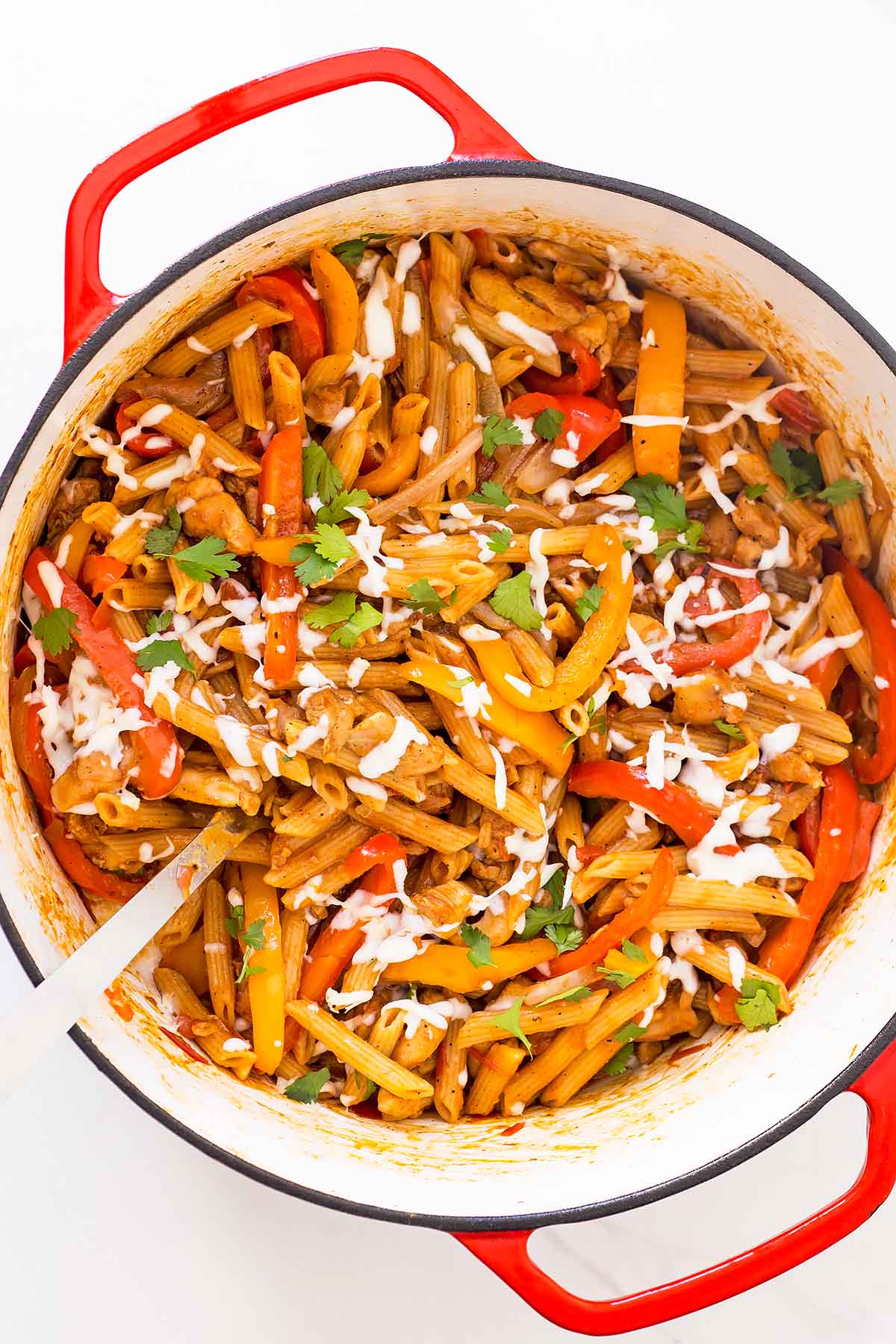 Once done, you can serve the pasta in bowls along with the typical fajita garnishes. These can include shredded cheddar cheese, avocado, and cilantro, but you could also extend it to homemade or store bought salsa, sour cream, or green chilies. 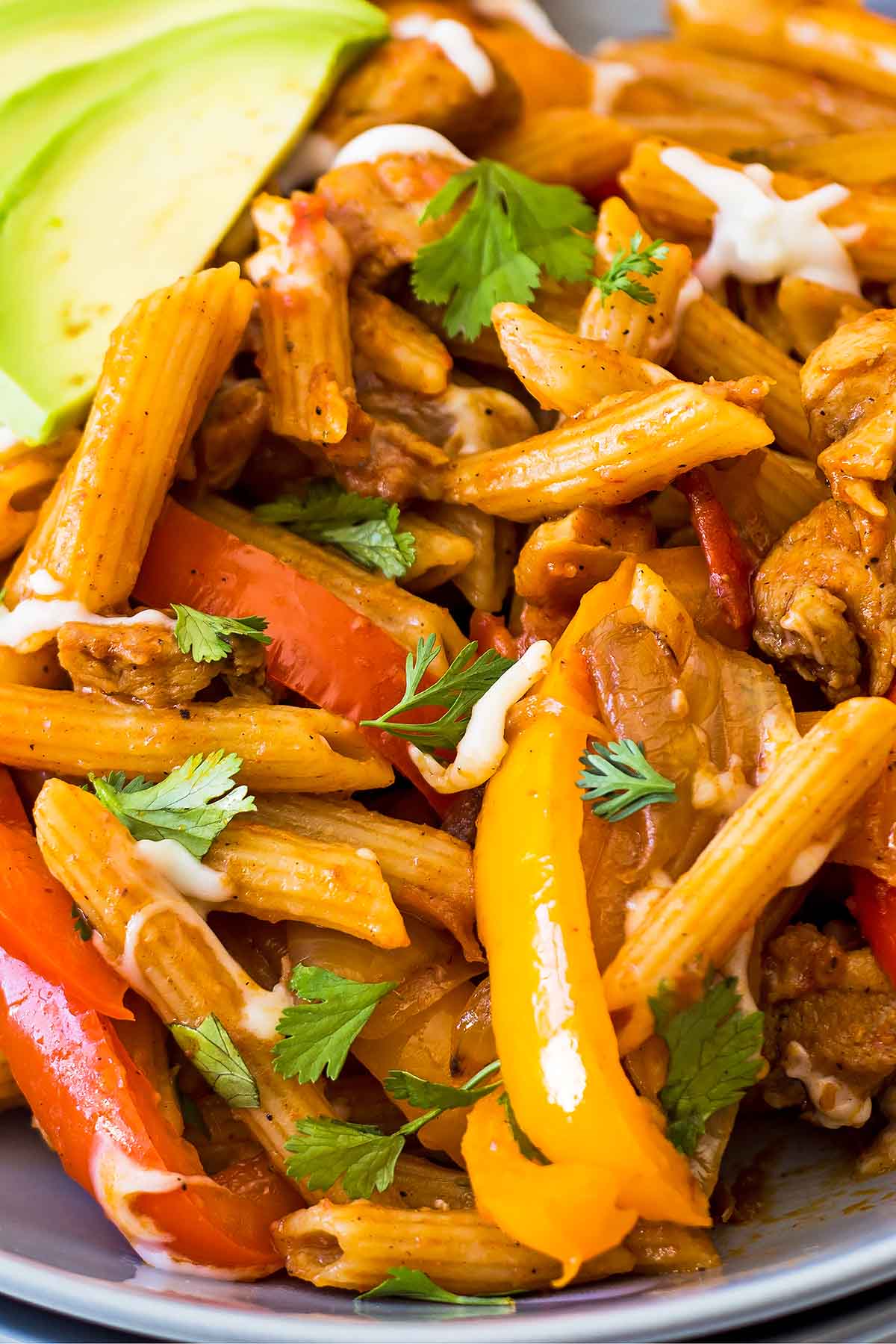 For the taco seasoning in this recipe, you can feel free to use store bought to make preparation even easier, but homemade taco seasoning is easy to make and may save you a few dollars if you have all of the ingredients on hand already to make it.

Taco seasoning generally contains ingredients like chili powder, cumin, garlic, and more. My version of taco seasoning is naturally gluten-free and includes all of those ingredients along with cayenne pepper, salt, pepper, onion powder, paprika, and oregano. If you make up a large batch of it, it can store in a cool, dark cupboard so that you have it on hand as you need it for either this pasta recipe or your homemade fajitas and tacos. 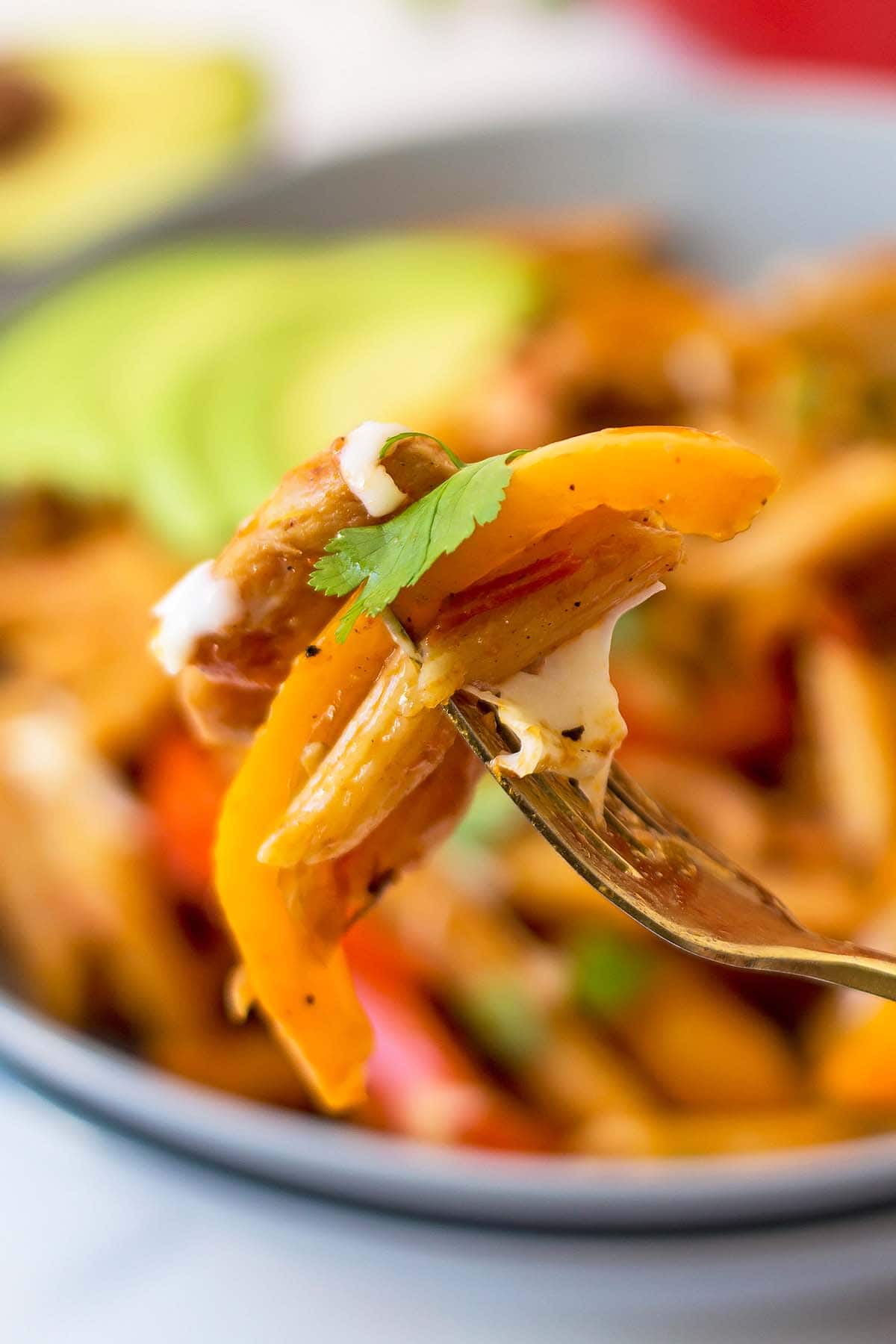 The wonderful thing about homemade pasta recipes is that there is always room to modify them if needed. Here are some ideas regarding how you could modify the recipe if needed. 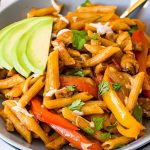 This chicken fajita pasta recipe features chicken thighs, onions, bell peppers, tomatoes, and fajita seasoning. It is also made in one pot which makes cleanup easy.

When doubling the recipe, make sure to sauté the veggies and meat in 2 batches each to avoid overcrowding the pot.