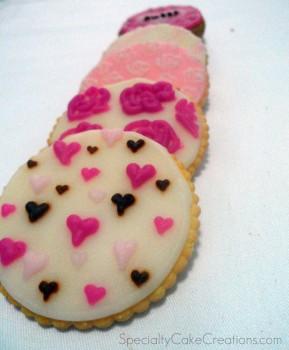 Royal or Glaze? Find the recipe to glaze icing below for a great-tasting icing that maintains its sheen and will please the crowd!

Before Thailand, I mainly used fondant to decorate cookies.

I do remember one set of cookies, that I also decorated with piped icing, but no matter how hard I think, sadly, I cannot recall what type of icing I used.

Only upon coming here, I decided to delve into the world of cookie decorating with all its different icing options. Before this time, I wasn’t even aware that cookie decorators either belong to Team Glaze or Team Royal.

I didn’t really know the differences, but for my first project (the Valentine’s cookies you can see above) I chose the glaze icing recipe by the amazing Amanda of “iambaker.” I chose this cookie icing recipe simply because it seemed easy and I had all the ingredients on hand. As simple and straight forward as the ingredient list happens to be, thankfully, so are the instructions!

I highly recommend giving this icing recipe a try!  It’s quick, easy and the ingredients are available almost everywhere!  I promise you won’t be disappointed!

Tips for Future Use

Later on, after also trying royal icing for cookie decorating (recipe & more details in another post), I learned the pros and cons of glaze icing.

Stay tuned for the next part about Royal Icing.