This creamy Vegetable Leek Soup with potatoes and carrots is thick and creamy while being completely gluten and dairy free. Includes instructions for making into an Instant Pot Vegetable Soup. Read to the end to learn my trick for making creamy soups that doesn't require cream or flour to thicken. 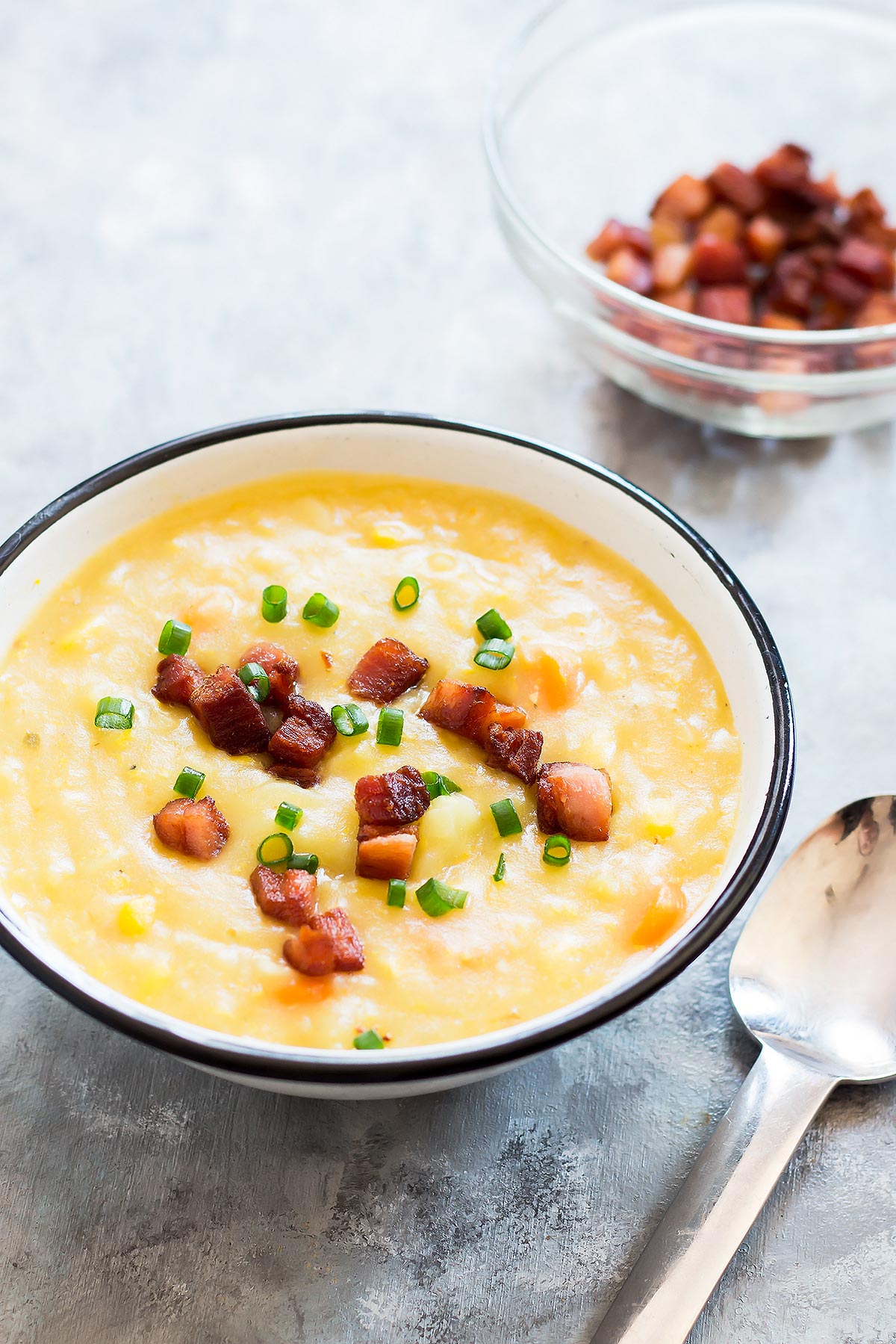 Compared to last year, we've had such a mild winter here in Calgary. After a weekend of freezing weather and snow, the sunshine is right back with balmy temperatures and warm Chinook winds that melt all the snow away.

This kind of Canadian winter I can almost live with. Well, almost indeed. In my perfect climate, winter doesn't exist. What's a gal to do. Compromises must be made sometimes.

At the same time, winter carries with it certain lovely aspects. Like cuddling up on the couch with a hot mug of cocoa. And heart-and-belly-warming comfort foods. Soup falls into this category for me - and this creamy vegetable leek soup is a perfect example of comfort food. 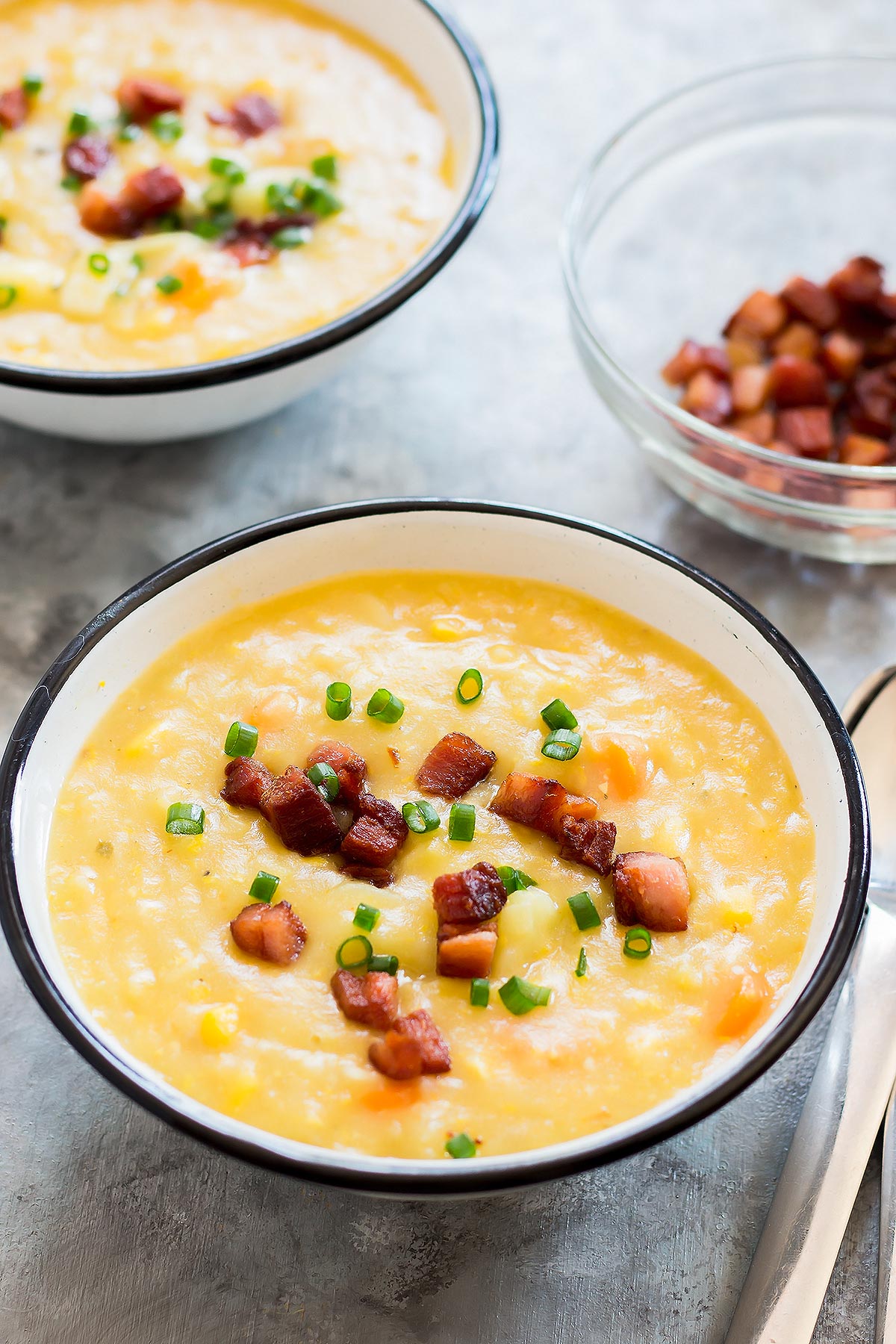 Leek Vegetable Soup From My Childhood

I absolutely LOVE soups. Light or rich. Creamy or chunky. All are warmly welcomed on my tongue and in my tummy. Soup rocks.

When I made these Cheese Sticks with Leek a couple of weeks ago, I was reminded of a vegetable leek soup from my childhood. Without much to go by, I set out to recreate it. In my memory, the only vegetables in the soup were leeks and potatoes, together with ground meat (or was it meatballs?) and probably a lot of cream.

My own version is a little different - optimized, if I may say so myself. There is no ground meat, but we start out by crisping up some bacon. The bacon fat is then used to pre-cook the leek and corn. The crispy bacon bits are used as final topping later. That's right. Making use of everything we can.

Next, to the softened leek and corn we add diced potatoes and carrots. Adding corn and carrots as additional vegetables (compared to the soup from my childhood) makes for a great colour and texture contrast. With only leek and potatoes for the original soup, it looked rather dull and grey. 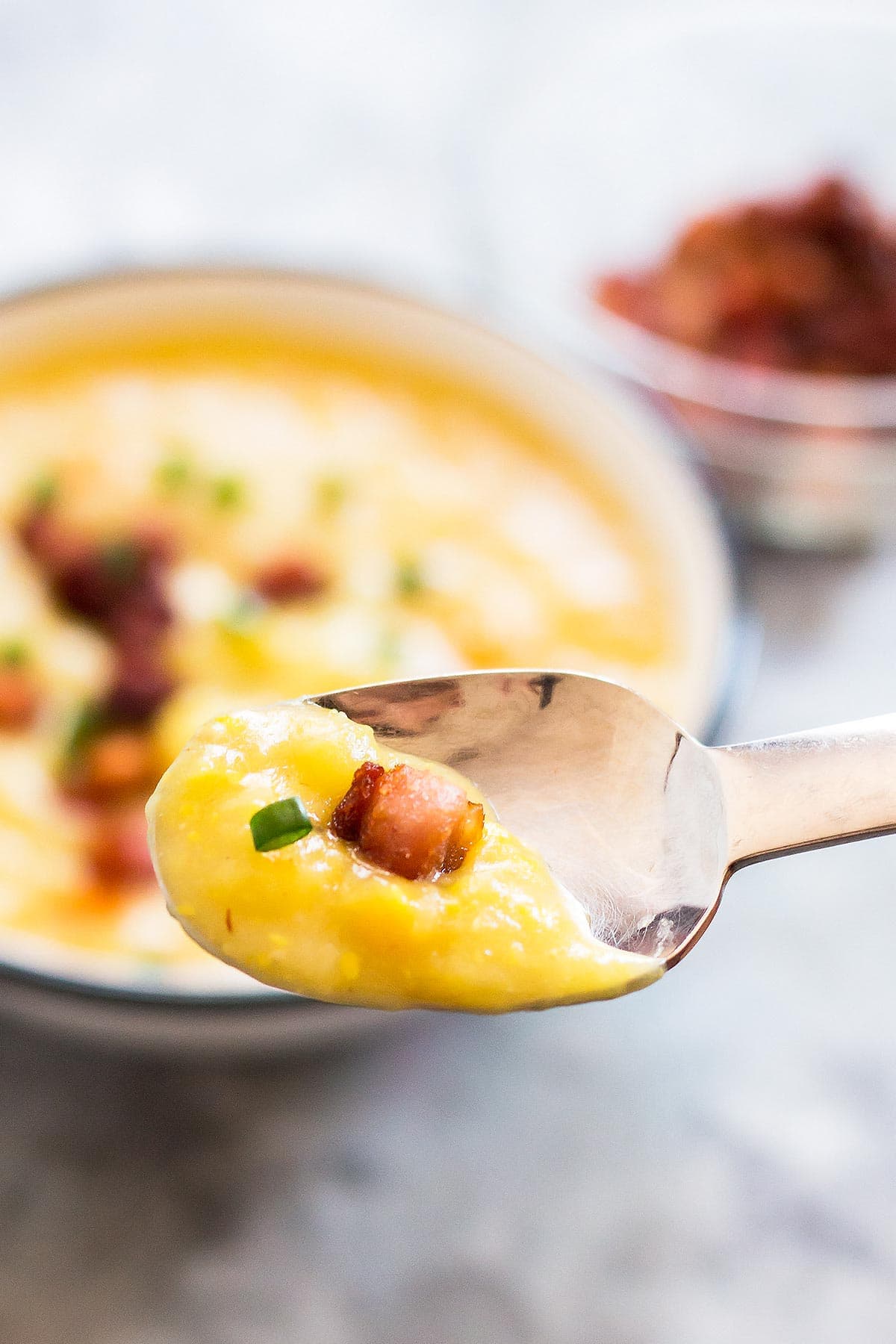 Puree For Creamy and Chunky Combination

Since this is a half creamy, half chunky soup, we are only adding as much broth as needed to cover the vegetables. Simmer until soft, then puree ⅓ of the soup; the rest remains chunky. I just used my blender. You can also use a food processor, just be careful not to add above the "liquid fill line". There will be soup all over your counter otherwise.

(You could also use an immersion blender, if you own one. You can puree parts of the soup right in the pot, which means less dishes. Yay! Just make sure to leave plenty of chunks; all depending on preference.)

Add the puree back (if not using immersion blender) and season the soup. Start with ¼ teaspoon each of nutmeg, oregano and black pepper; then add more to taste (I ended up with probably about ½ teaspoon each). For a little heat I also used ¼ teaspoon of ground cayenne pepper, but this is totally optional. 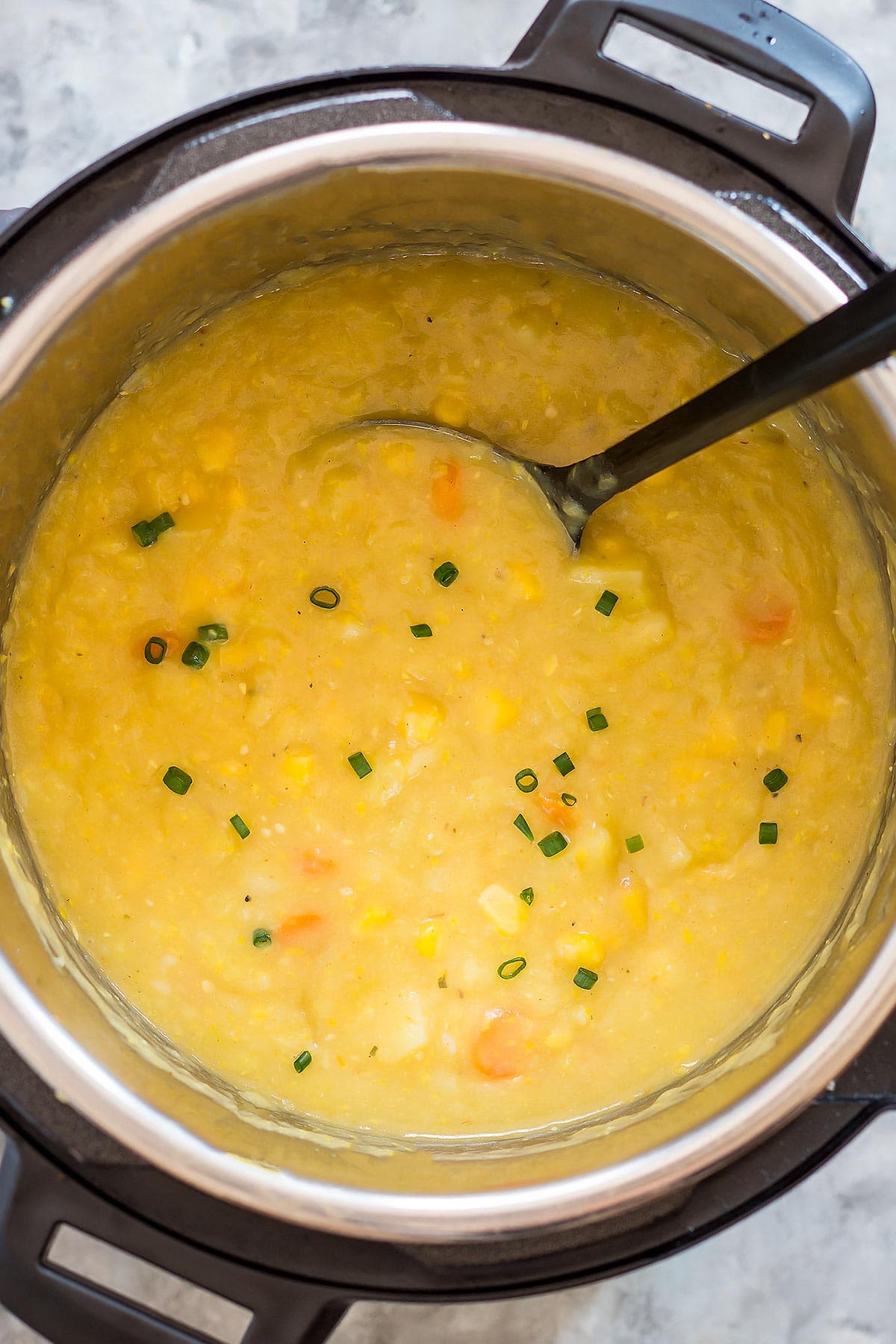 Now, more than 4 years after first publishing this recipe for vegetable soup with leeks I finally tried to make it into a pressure cooker version. And I have to say I love it!

The Instant Pot vegetable soup is still a super easy one pot soup recipe. You can even skip the sautéing step, as the pressure cooking process softens the leeks perfectly well.

Overall, there might not be a lot of time savings between the Instant Pot and stove top versions of this leek veggie soup. But with the Instant Pot version there is the added benefit of not having to watch the pot to make sure it doesn't boil over.

There is also no need for stirring in between. So it is the 'hands-off' part that is the true benefit. It give you time to set the table, check homework, or do anything else still waiting to be done before dinner time.

Delicious Comfort Food As a Result

The end result is a delicious bowl of warming comfort food. It is perfectly creamy (without any dairy added) with hearty chunks to bite. Add the bacon as a topping on each bowl.

I also like green onion slices and a few rings of raw leek (if you would like to try that, make sure to save a few in the beginning). Leftovers of this vegetable leek soup make wonderful lunches and stay good in the fridge for several days. 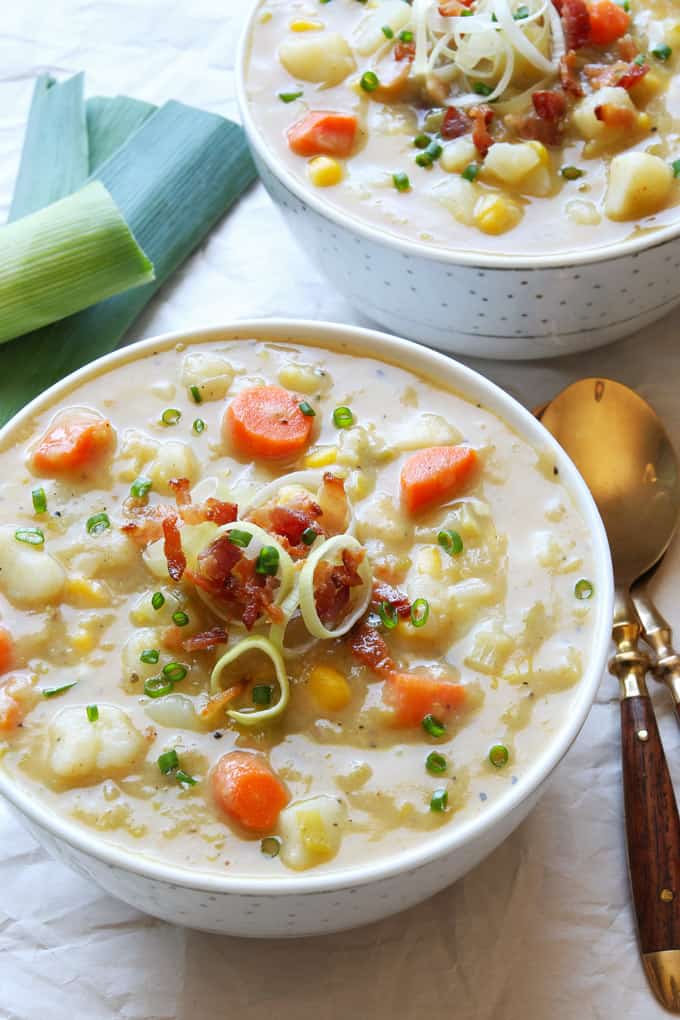 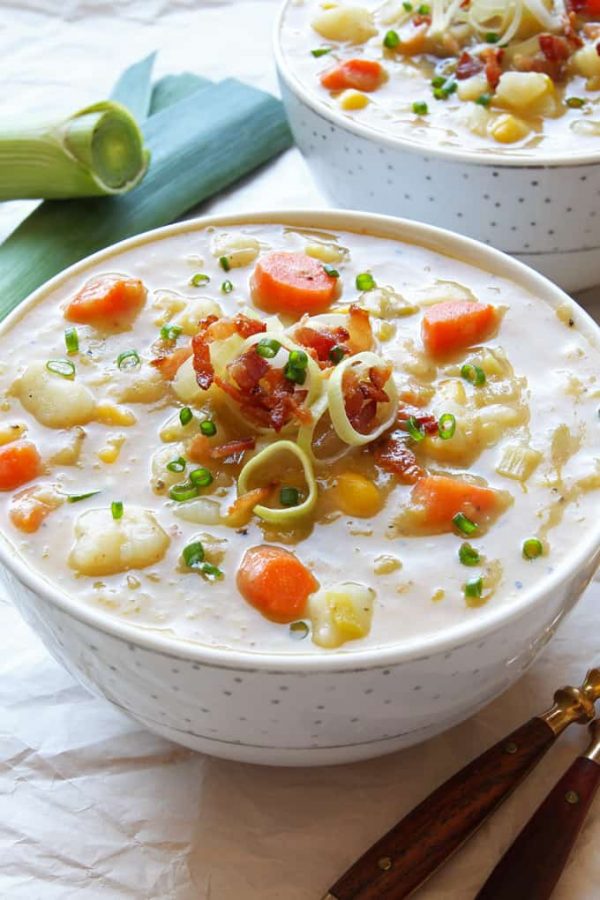 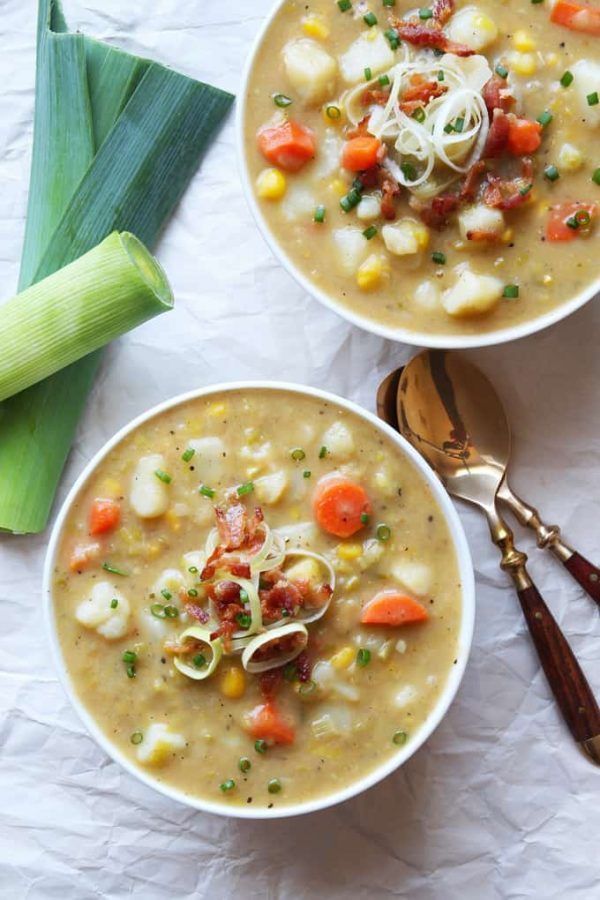 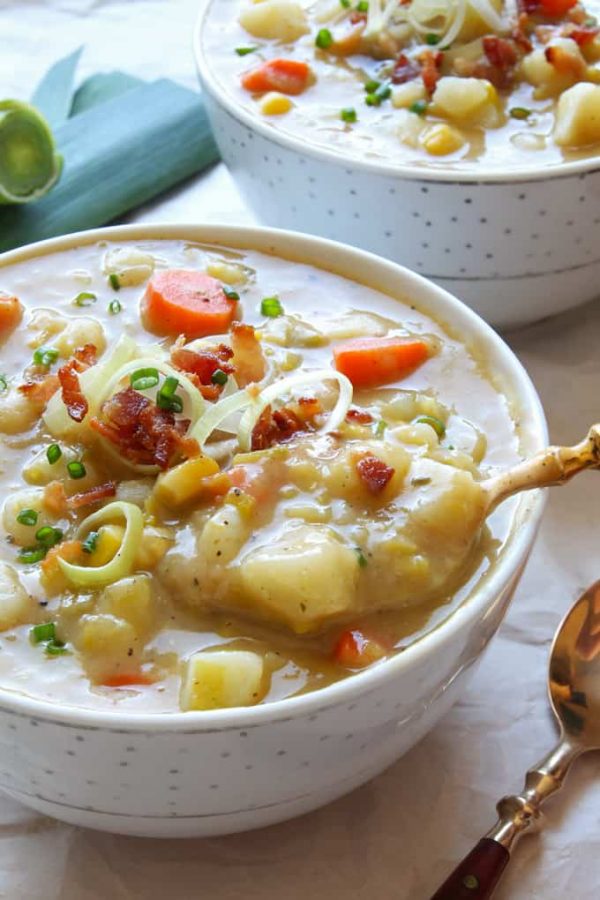 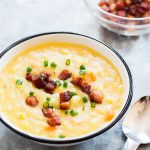 This creamy Vegetable Leek Soup with potatoes and carrots is dairy-free. It is delicious comfort food for the entire family.

Omit the bacon for a vegan soup recipe

Check out these other delicious soup combinations for more yummy to your tummy!