You are here: Home » General » The Secret Life of Popcorn: Why “Old Maids” Exist

Anyone who has ever popped a bag of delicious, buttery popcorn has probably contended with an old maid. The unpopped kernels of popcorn that somehow refuse to submit to the heat of the microwave. Popcorn cooked other ways don’t seem to fair any better. 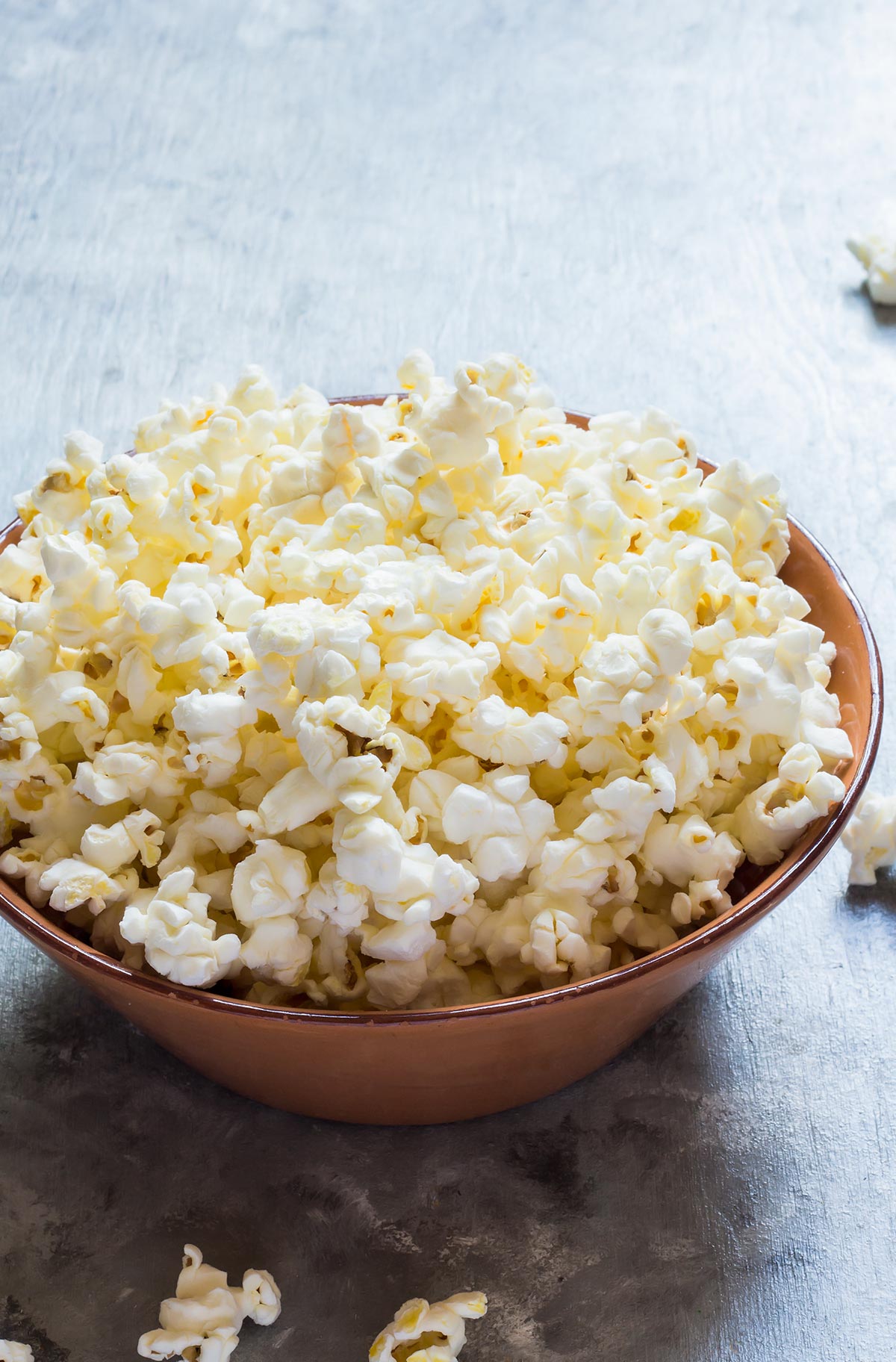 SIDE NOTE: From our experience, the type of popcorn machine leaving the least amount of unpopped kernels is the hot air popper.

It may seem like an odd thing to study, but why certain kernels absolutely refuse to pop have puzzled scientists for years. There have been many studies looking at this, but two components are the most critical. One 1989 study correctly pinpointed moisture content as a critical factor in whether popcorn would pop or not. It took a 2004 study to find out what the optimum moisture was.

Scientists looked at a moisture range from 8% to 20%, and popped them all to try and see which ones pop the best. They found that 13.5% moisture was best for oil popped popcorn, and 14% best for air-popped.

The reason is simple. Without enough moisture, popcorn can’t pop at all. The popcorn needs a certain amount of steam to burst the hull and turn into popcorn. Many gardeners discover this when they thoroughly dry their corn, only to try and pop it later with nothing to show for their hard work.

Too much moisture, and the popcorn may start to sprout, breaching the hull and making an easy way for the steam to escape. In both cases, the popcorn won’t pop all the way. If popcorn kernels are boiled for a short amount of time, the moisture content raises to 30%, combined with the hot water weakening the hull, leads to half-popped popcorn. That’s popcorn that has broken the hull and has some of the fluffy white visible, but is no bigger than a corn nut. You’ve probably seen one or two of these in the bottom of your popcorn bag.

Some people actually like these extra crunchy snacks (despite the hulls getting stuck between their teeth.) There is even a snack company called half-popped that intentionally makes popcorn snacks this way.

With companies like this, it seems getting unpopped or badly popped popcorn is easy, but getting a bag of completely popped corn is a rare and difficult event. Even in a perfectly moist (but not too moist) bag of popcorn, there are still old maids. Often as much as 4%. This tiny, but still annoying, amount of old maids has puzzled scientists.

Thanks to a recent study, we may finally know why. This time, scientists looked at the hull, the hard outer-coating that surrounds the kernel, to see if unpopped kernels looked different from poppable corn. Bruce Hamaker, Ph.D., of Purdue University was one of the scientists who worked on the project.

“We think the secret to maximizing ‘pop-ability’ is found in the special chemistry of the corn kernel,” he said.

During the experiment, Hamaker and his team looked at 14 different varieties of popcorn. All fourteen were put into a microwave, and how well they popped measured. The variation found was huge. In the worst performing variety, nearly half of the popcorn kernels failed to pop. In the best, only about 4% were unpoppable. The scientists took a look at the best performing kernels, and looked to see what made them different. Once under a microscope, what made some popcorn kernels different from others became apparent.

The outer hull, known as the “pericarp” was stronger in the better performing kernels. To be more precise, the crystalline arrangement of the cellulose making up the pericarp was arranged better, making them more durable. In order for popcorn to pop, the outer hull acts as a sort of pressure cooker. When the moisture reaches a certain temperature, it had no other alternative but to explode the popcorn. In the lower quality cellulose, sometimes it could escape in other ways rather than build up the necessary pressure to pop.

If Purdue scientists can take this information and make it into a reliable method of eliminating old maids, it could be a boon to the popcorn industry. The industry has long since been trying to eliminate them because of the danger they pose to consumers. Unexpectedly biting down on an unpopped kernel isn’t just annoying, it can cause real damage. The kernels can destroy fillings, break teeth, and even act as a choking hazard.

Even though few people are actually complaining about the presence of unpopped kernels in their food, popcorn companies still have an interest in improving their products, and two major companies have already expressed interest in the study. The information in it may help them come up with new ways to reduce the amount of unpopped popcorn, and having an old-maid free bag of popcorn may well be a good advertising point for them.

A few solutions have been put on the table so far. One thought is to selectively breed only for this better quality structure. By breeding only the popcorn that shows this structure, eventually the number of lower quality kernels will be reduced or eliminated. This could be time consuming, but may be worth while. Breeding is a common strategy for improvement, and is how we have gotten the corn we know today in the first place.

Another possible method is to find a chemical coating that can be placed on the popcorn to achieve the same effect. This may not fly with current consumers, who seem to prefer a more natural food, but it may be an avenue the popcorn industry will try. Major concerns besides public appeal include whether a chemical, even a safe one, will effect flavor.

The final method being considered is genetic engineering. This again comes with consumers dragging their feet, but may produce the best and quickest results overall. The other downside to genetic engineering is that it may be more expensive in the long run, as they figure out what modifications can be made to improve the outer hulls and give them the strength they need for a good pop.

Ways to reduce the amount of old maids in your popcorn

Until science gets to work putting these ideas into effect, you are probably going to have old maids in your popcorn. If these popcorn kernels annoy you, there are a few things you can do to reduce the amount you get.

First, choose a high quality brand of popcorn. Typically speaking, the better brands of popcorn yield the best pop-ability. Low quality brands can leave up to half of the kernels unpopped. Fresh popcorn pops a lot better than old popcorn, so it is worth it to source popcorn from farmer’s markets or other locations where you can ask how recently they have been picked.

If you get lots of old maids, it may be worth it to save them, soak them to raise their moisture content, and then try popping them again. It may be simply that their moisture level has fallen below the recommended amount. After soaking, you’ll still have to dry off the outer hull a little bit. You can do this briefly at low temperatures in the oven, or simply give it a thorough towel dry.

You can also try ordering different varieties of popcorn online. There are a whole host of different varieties of popcorn out there, from the standard whites and yellows we see at the movie theater, to popcorn in colors ranging from black to red and blue. Each variety has a different level of pop-ability, and you may be able to find a variety that leaves old maids dwindling down to just one or two in the bottom of the bag.

Old maids are an annoying shock in our mouths when we accidentally bite down on one, and they can be annoying. Thanks to advances in science however, we are that much closer to enjoying a bag of popcorn all the way down to the bottom without ever encountering a single too hard kernel.

Previous Post: « Can You Eat Popcorn while On a Diet?
Next Post: In Search of Flavor: The Lost Art of Heirloom Popcorn »