This paleo banana bread recipe makes a moist loaf with a delicious banana flavor. It is the perfect recipe to utilize overripe bananas, as the intense taste of the overripe bananas will ensure a tastier loaf. Besides being perfect for paleo, this is also a dairy-free, grain-free, and gluten free banana bread. 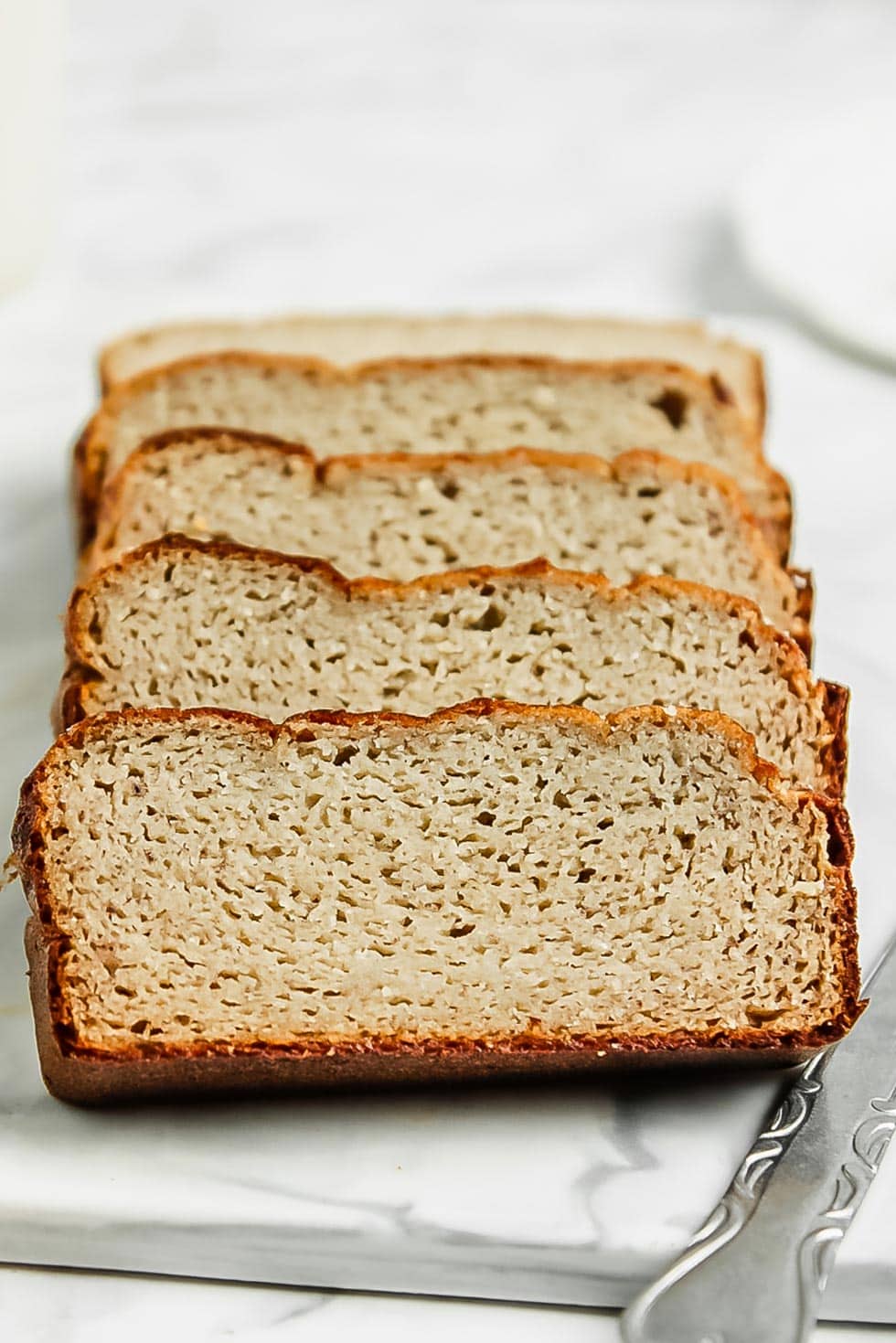 Banana bread recipes traditionally contain all-purpose flour and refined sugar, but this version is quite different. Instead of traditional wheat flour, this paleo banana bread includes coconut flour as the base, which is a gluten-free flour that involves dried coconut. Since the flour is essentially coconut, it has a sweet, mildly coconutty taste that is perfect in desserts.

For the sweetener, this bread includes paleo friendly maple syrup. While maple syrup is calorically very similar to white and brown sugar, it has a delicious flavour and more nutrients. In fact, it includes manganese, riboflavin, thiamin, calcium, magnesium, and potassium. 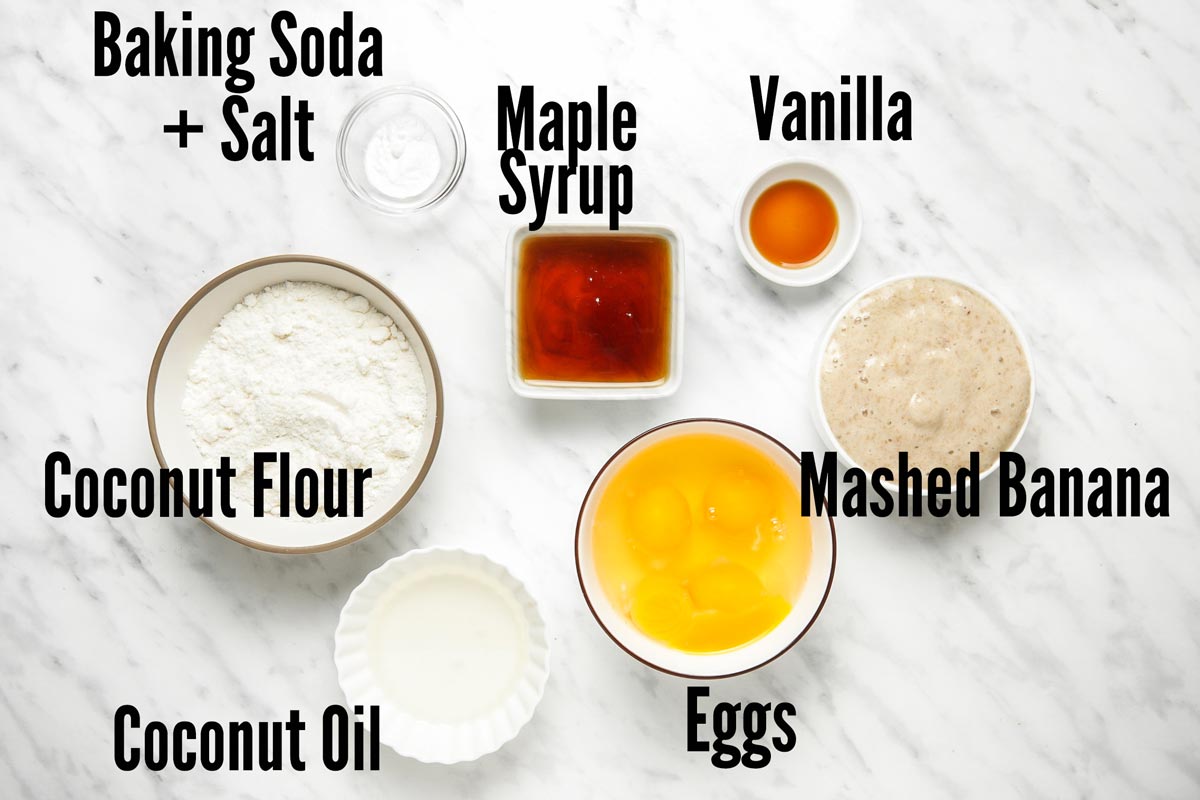 How to Make the Paleo Banana Bread Recipe

This banana bread bakes in a 350°F oven, similar to many other loaves and cakes. After starting to preheat your oven, you will want to line an 8 x 4-inch loaf pan with parchment paper to prevent sticking.

I recommend that you cut two pieces of parchment paper, placing one horizontally and one vertically in the pan so that there are flaps of paper over all four edges. This will allow you to lift the loaf out of the tin easily. 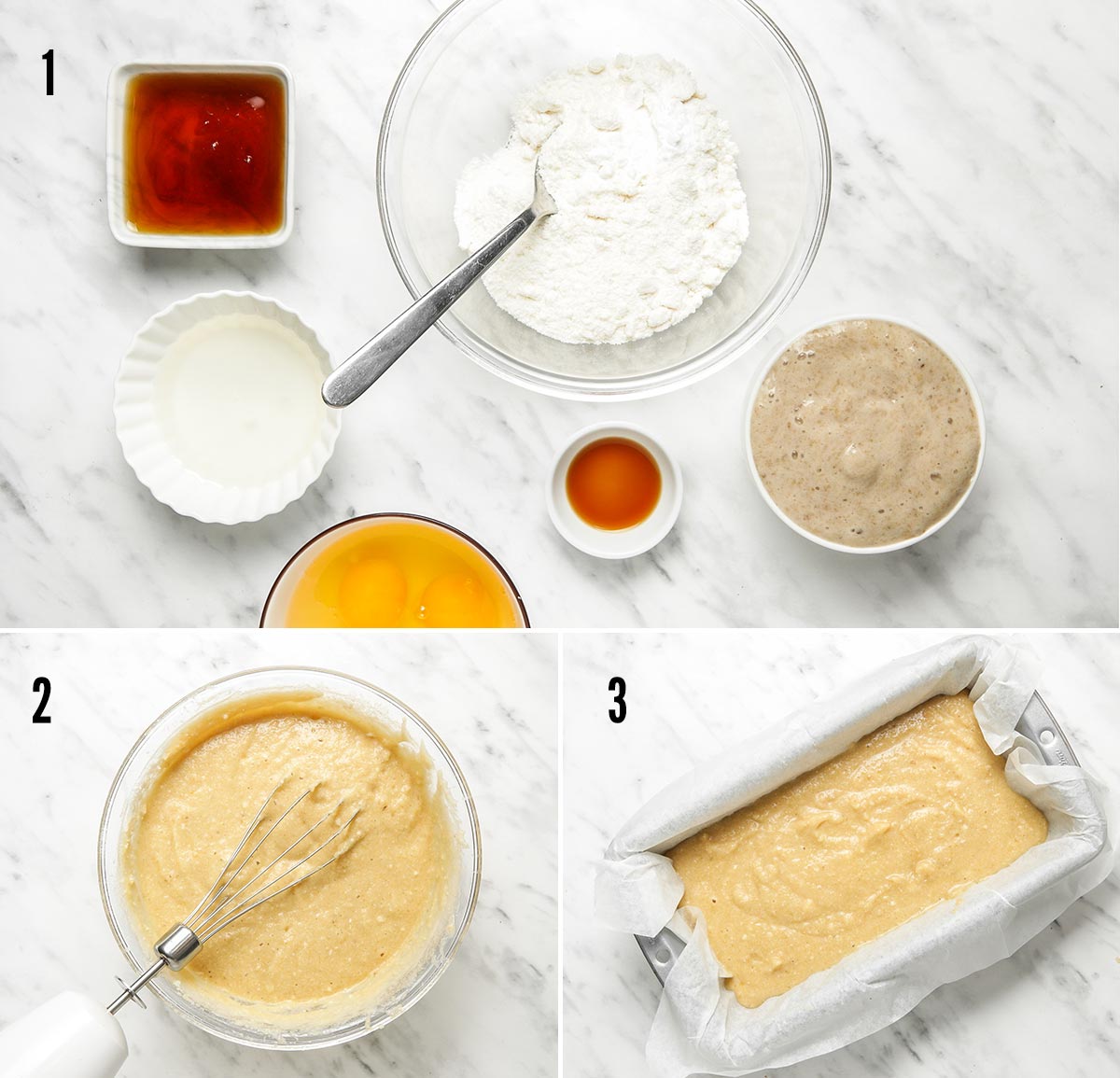 1. To make the batter, you begin by stirring the dry ingredients: coconut flour with baking soda and salt in a large bowl until combined. You can add some ground cinnamon to the batter if you like for added flavour.

2. Then, to the same bowl, add the wet ingredients: the eggs, mashed banana, coconut oil, maple syrup, and pure vanilla extract, whisking until everything is combined. Alternatively, you can use a hand mixer to blend the batter together. Just make sure you only stir until the batter is just combined as over mixing may cause more air buildup and result in the loaf cracking during baking. And overworked leavening, may actually cause the bread to rise less resulting in a dense texture.

3. Once you have blended the batter, simply pour it into the loaf pan before baking it.

The banana bread should take 35 to 40 minutes to bake. You will be able to tell if it is done by whether it is shiny or opaque on top (opaque and dry is what you will be looking for), whether the loaf springs back when you push into it with a finger (it should spring back rather than leaving an indent), and whether an inserted skewer or toothpick comes out with wet crumbs (a few dry crumbs are fine).

The loaf should cool in the pan for at least half an hour. Then you can invert it onto a wire rack to cool completely. Coconut flour goods tend to be quite delicate, so it is essential that you allow it to set up appropriately before attempting to unmold, slice and serve it. 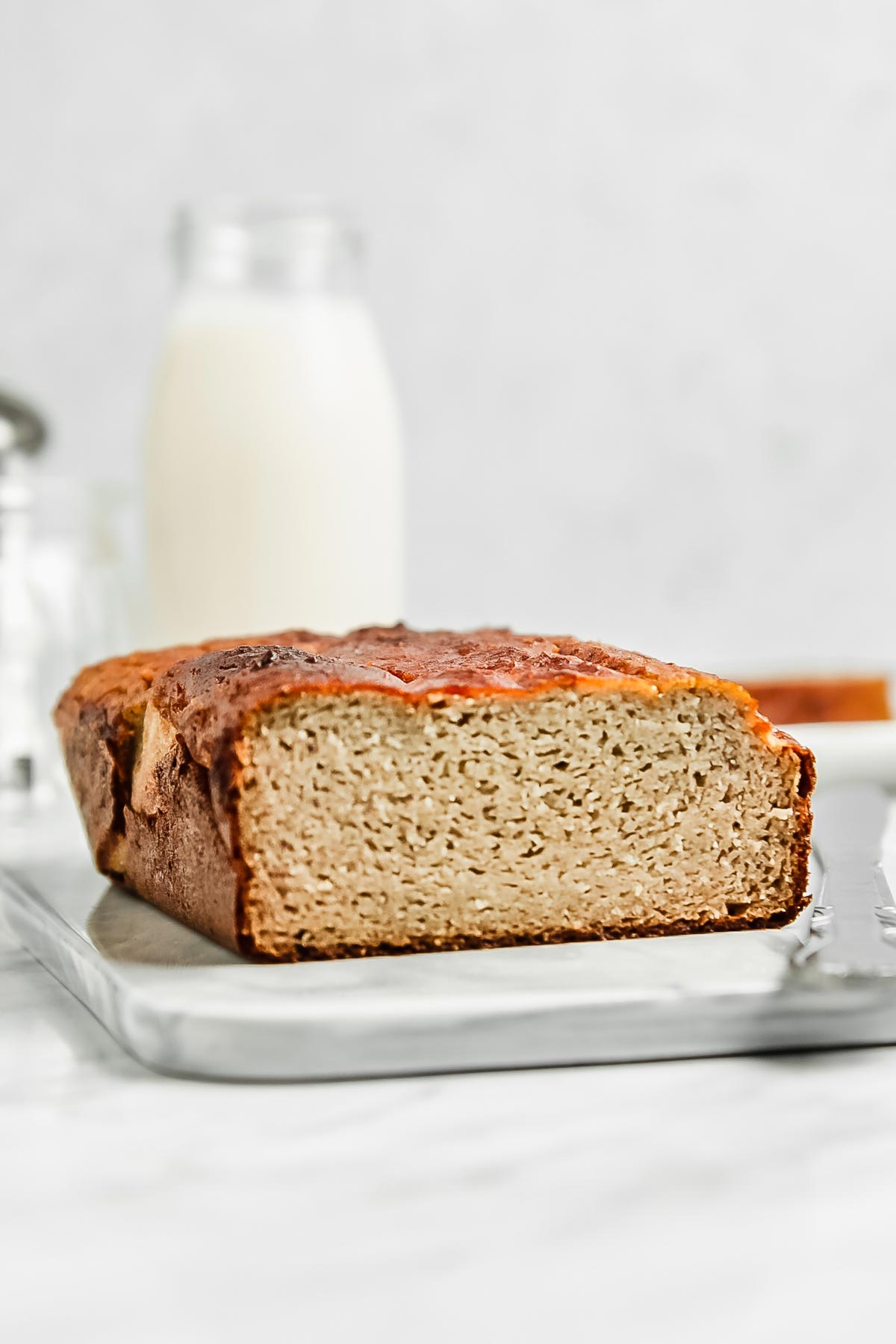 This paleo banana bread recipe makes for a perfect breakfast, snack, or dessert. If enjoying it for breakfast, it is perfect on its own, but you could also warm it up and spread it with butter or coconut oil if desired. Additionally, a little honey or maple syrup drizzled over warm banana bread would make it an extra special treat.

If the banana bread dries out a little and it isn't as appealing to eat as-is, you can still use it. Simply turn it into French toast by dipping it into an egg and milk (dairy-free if desired) mixture. Then, fry it in a skillet with butter or coconut oil. You can serve it dusted with a little cinnamon and drizzle with maple syrup as you would with traditional French toast. 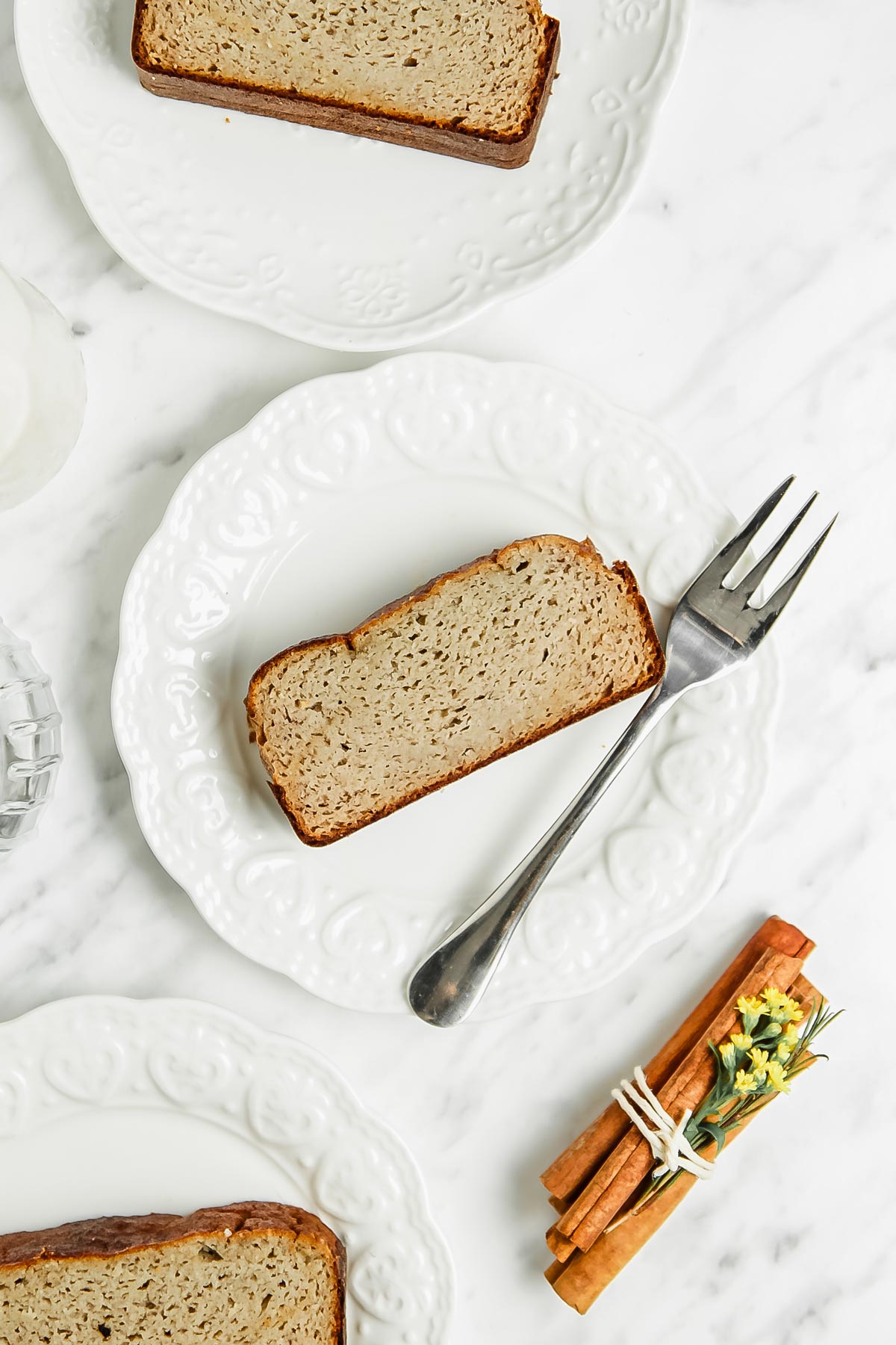 As with other loaf recipes, this paleo banana bread recipe has some potential for variation. If you would prefer not to add a ½ teaspoon of cinnamon, you could add a ½ teaspoon of a pumpkin spice mixture instead. Additionally, you could blend some cinnamon, nutmeg, and cloves together for a more heavily spiced flavour. I also recommend my Homemade Apple Pie Spice recipe if you happen to have a batch of that on hand.

Other options to vary this loaf include stirring a ¼ to ½ cup of chocolate chips, raisins, dried cranberries, or chopped walnuts or pecans into the batter. You could also add a combination of these ingredients to reach a ¼ to ½ cup. Just note that dried fruit can sometimes add extra moisture to baked goods so the loaf could take slightly longer to bake. 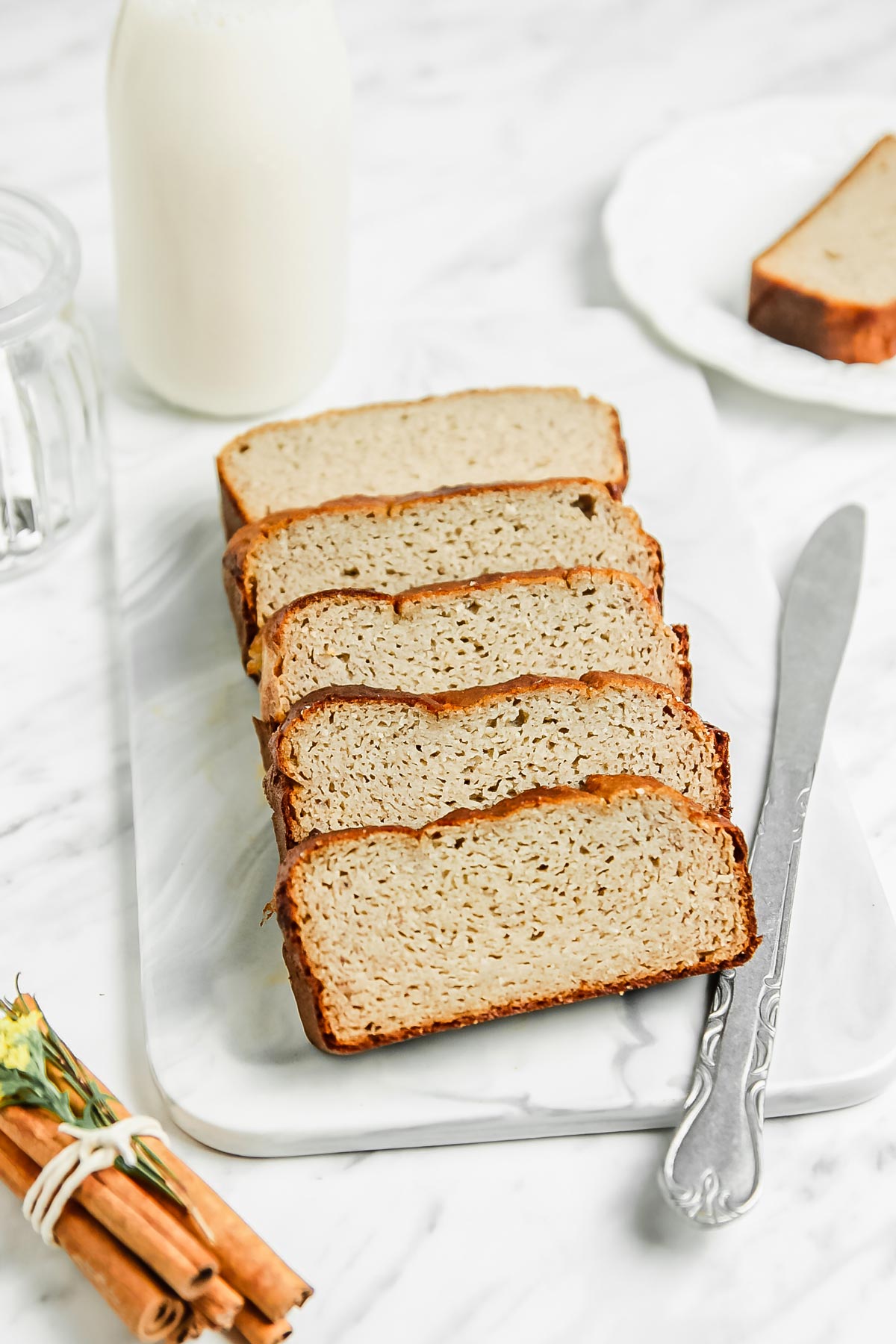 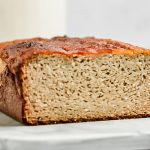 This paleo banana bread recipe has resulted in a fluffy loaf with a robust banana flavour. It is the perfect recipe to utilize overripe bananas, as the intense taste of the overripe bananas will ensure a tastier loaf. Besides being perfect for paleo diets, this bread is also gluten-free and dairy-free.