This Banana Blueberry Whip Blueberry Nice Cream is a quick and easy summer dessert that tastes like soft-serve ice cream but actually consists of just whipped frozen bananas and blueberries! 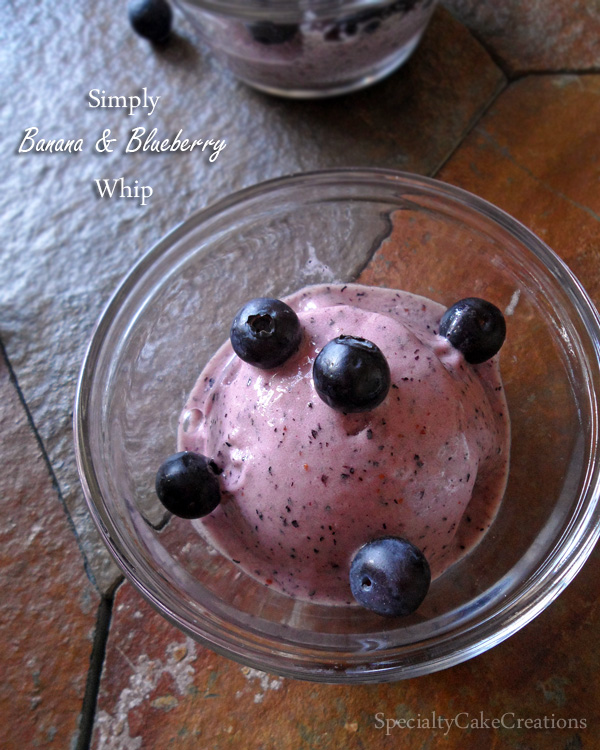 Alrighty guys! I just have to share this frozen dessert with you.

On one hand, it seems almost too simple and easy, but on the other hand, this stuff is just too good to keep all to myself.

You have to know that I am kind of crazy about ice cream! 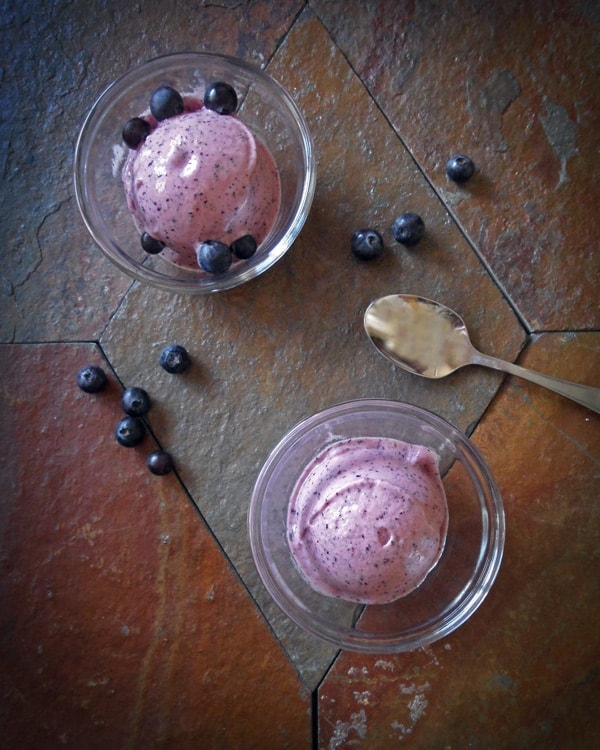 Frozen Bananas to the Rescue!

Unfortunately, ice cream isn’t really a healthy treat at all. In order for a frozen dessert to taste sweet a lot more sugar/sweetener has to be added than in, let’s say, a liquid. That’s one of the reasons why molten ice cream tastes pretty gross – it’s just waayyy too sweet.

So this banana & blueberry whip could really be my saving grace this summer since there is no sugar at all added to this frozen dessert. Actually, aside from bananas and blueberries, nothing else is added. Really!

You just freeze a large, ripe banana (cut into chunks first) and about 1 cup of blueberries, process the frozen fruit in your food processor until whipped to a creamy, light consistency and you are ready to enjoy this soft-serve taste-alike. 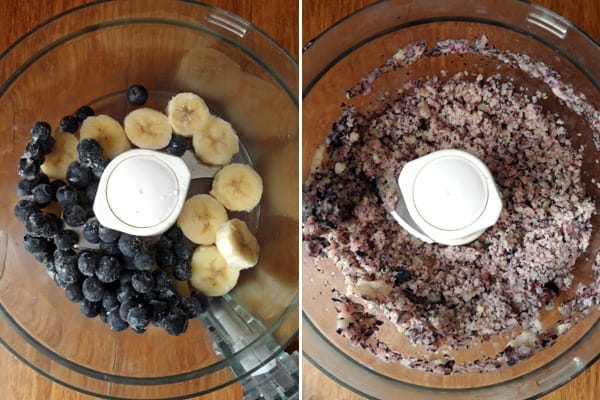 I Didn’t Know Bananas Could Do This!

I learned about this amazing banana whip from Sally over at Sally’s Baking Addiction. She uses the banana whip often in her skinny milkshake recipes.

At first I was doubtful about the whole concept of frozen banana turning into soft-serve like consistency. After the first little bit of processing the fruit just looks like crumbles and not too appetizing. It’s time to scrape down the bowl and keep processing. Not too long later, almost magically, this creamy, fruity soft-serve appears. 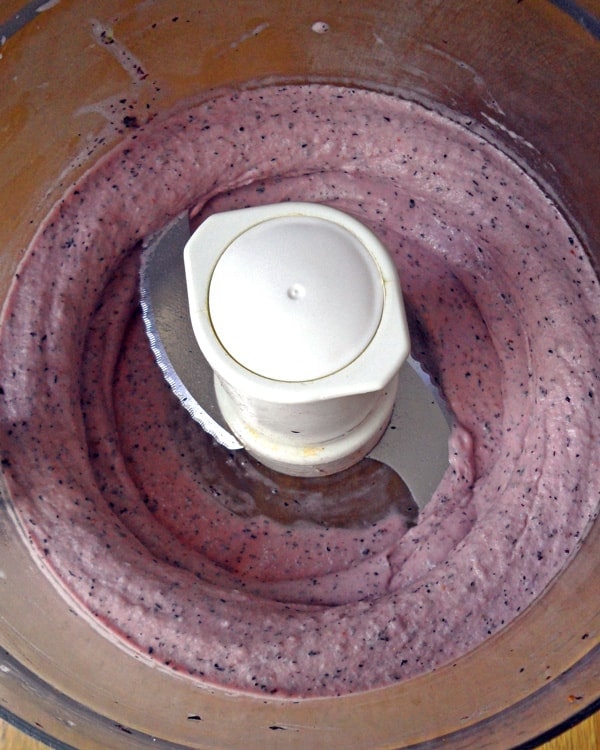 Sometimes I can’t believe that it is just fruit and actually healthy!

I like to serve this whip right away, especially when using blueberries as they change color to a less appetizing shade of blue after a while.

Letting the bananas ripen before freezing is key in this dessert. A ripe banana naturally adds more sweetness and fools you into thinking you are eating actual ice-cream.

However, you aren’t limited to blueberries. How about a banana-strawberry combo? Or maybe some mango? 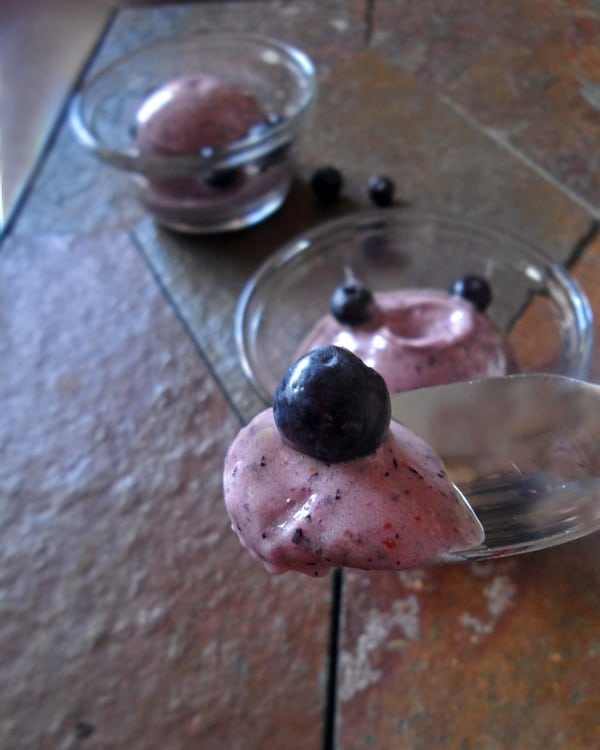 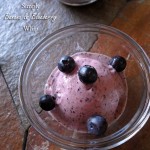 Apparently there also is a similar healthy recipe for pineapple whip. I can’t wait to try it out. Right now I have a pineapple on the counter waiting to ripen. I will report back once I tried that version. Update: I’ve made Pineapple Whip and it is amaaaaazing!!!!

Until then, stay cool on these hot summer days!

For more healthy “Nice Cream” flavors check out this post: 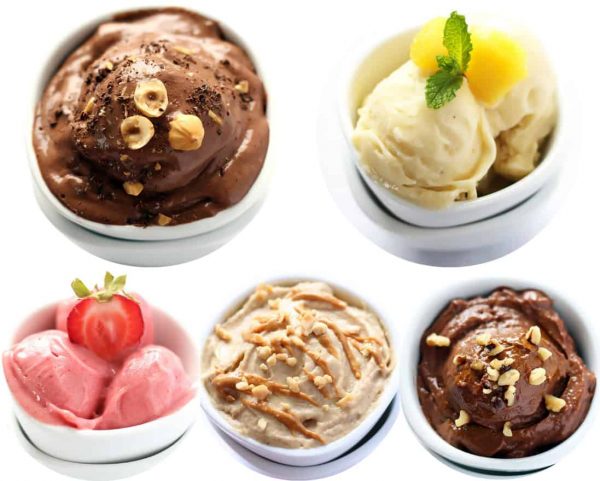 If homemade churned ice cream (not in a food processor) is more your thing, check out my ice cream maker reviews for the best model to make homemade ice cream!