This barley tabbouleh is a unique take on the classic vegetarian salad including bulgur wheat. Despite the difference in grains, it still has an abundance of fresh herbs, tomato, and cucumber. The lemony dressing soaks into the grains making this healthy salad irresistible as a side dish or pita filling. 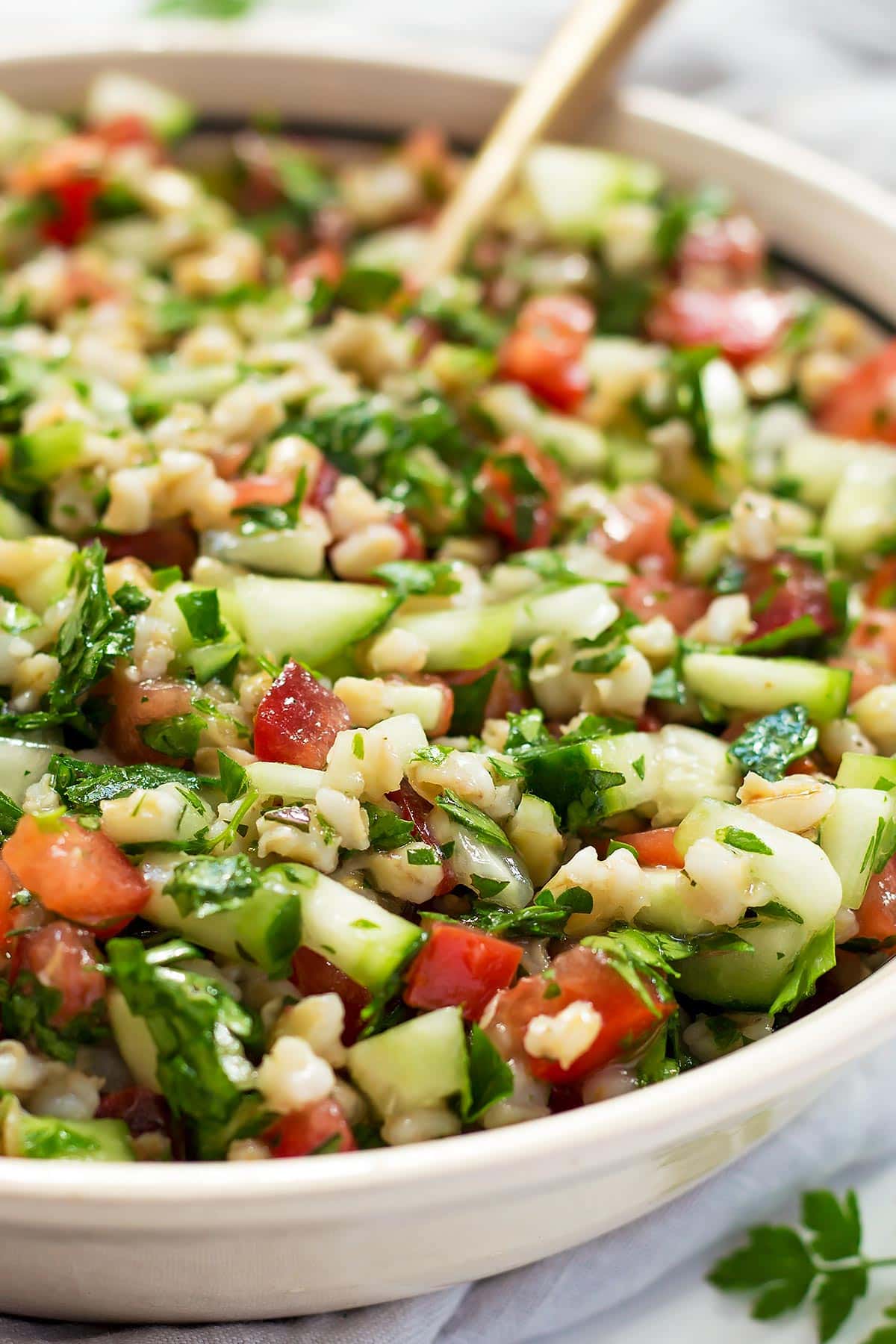 Tabbouleh is a bulgur salad that originated in the Middle East. However, it has gained world popularity due to its fresh flavours. The original version includes bulgur, fresh parsley, tomato, and mint. Meanwhile, the dressing is often a combination of olive oil and fresh lemon juice.

Bulgur is a grain that doesn't require cooking. All it needs is a soak in some water to hydrate it before use.

This vegetarian salad often makes up part of a meal of small dishes, called mezze. Other foods like this include dips like hummus and baba ghanoush along with pita bread, although there are so many of these dishes to choose from. Today, tabbouleh salad is widely popular in the Western world and enjoyed as a side salad alongside items like grilled meat, seafood, and other salads. 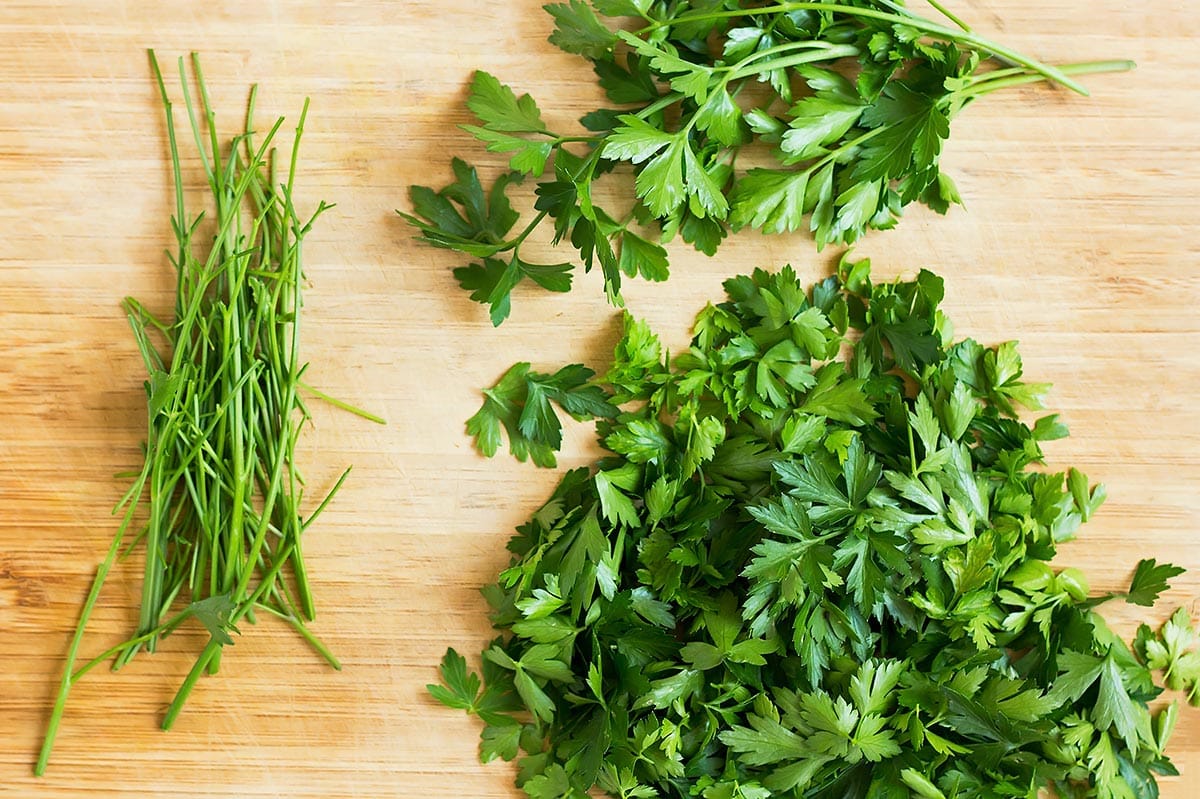 How to Make Barley Tabbouleh

Unlike bulgur, pearl barley requires cooking. The process is as easy as making something like quinoa, though. Simply combine the pearl barley and water in a pot, bring to a boil, and simmer until it is tender, for about 15 minutes. Be careful to not let it go too long or else the barley may become mushy and unappealing in your salad.

To ensure that the grains don't stick together in your salad, you should rinse them with cold water to remove the starches before placing them in a large bowl. Rinsing the grains also cools them down and stops the cooking process. 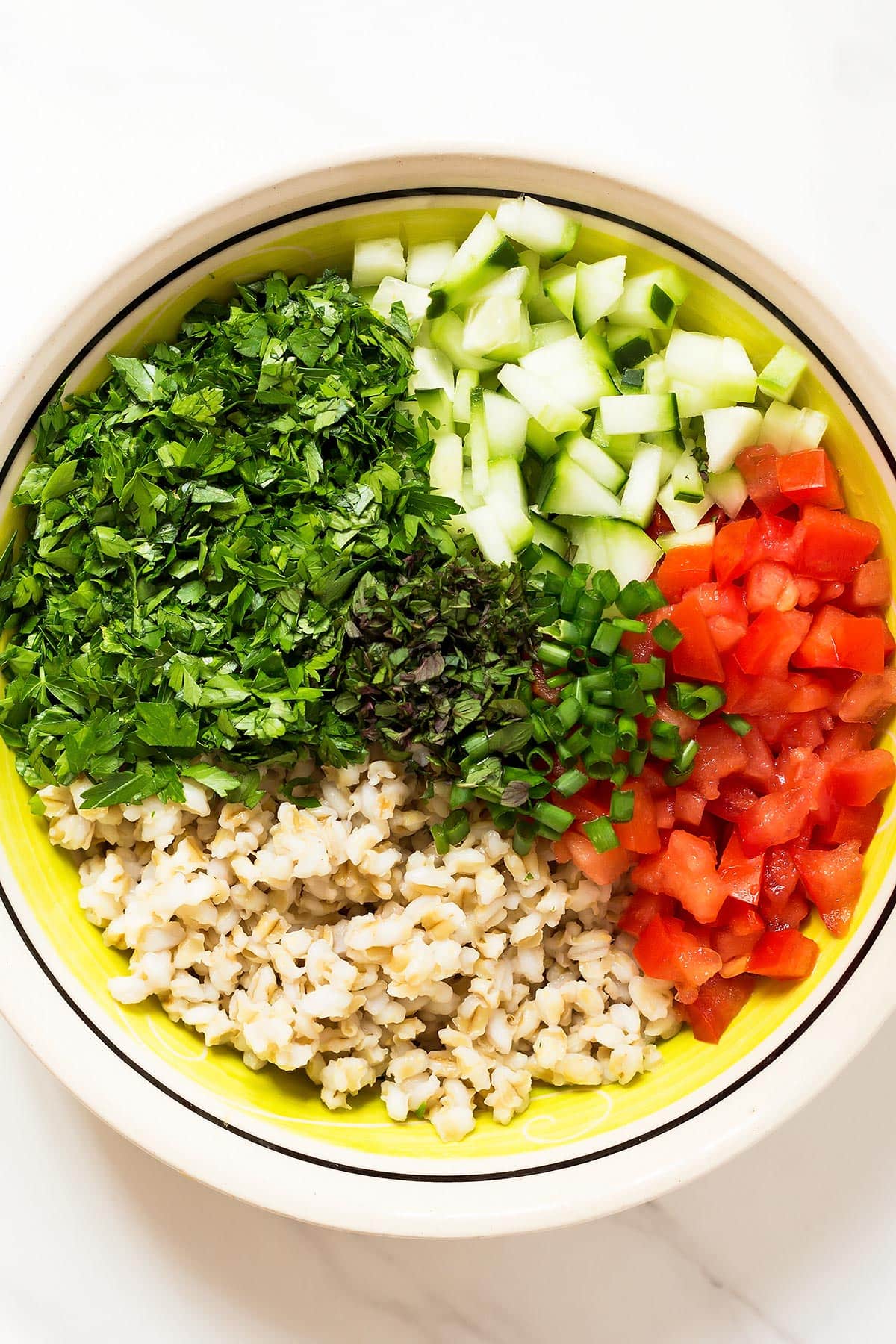 Next, you add the barley to a large bowl along with the parsley, tomato, cucumber, fresh mint, and green onions. I use only the parsley leaves and remove stems before chopping. While there is no need to remove the seeds from the tomato and cucumber, feel free to do so if you prefer less moisture from those vegetables.

The dressing is easy to make. I find that one of the best ways of making a dressing quickly is to mix it in a jar. Simply add the olive oil, garlic, fresh lemon juice or lime juice, salt, pepper, and allspice to a jar, cover it with a lid, and shake it until emulsified. You can make up a larger batch of dressing to hold in the fridge for other salads throughout the week. The dressing gets tossed into the grain mixture until it is sufficiently coated. Fresh lemon juice or lime juice is ideal to using pre-squeezed as they offer a brighter taste.

If you plan on serving this barley tabbouleh later in the day or even the following day, I recommend that you hold back some of the dressing until you are ready to serve it. The reason is that the grains will absorb the dressing and become dry after sitting. By holding some dressing back, you can toss it in just before serving your salad and ensure that the mixture isn't dried out when you serve it. This is a great rule of thumb for any starchy salad including cooked pasta or grains, as they tend to soak up dressing quite quickly. 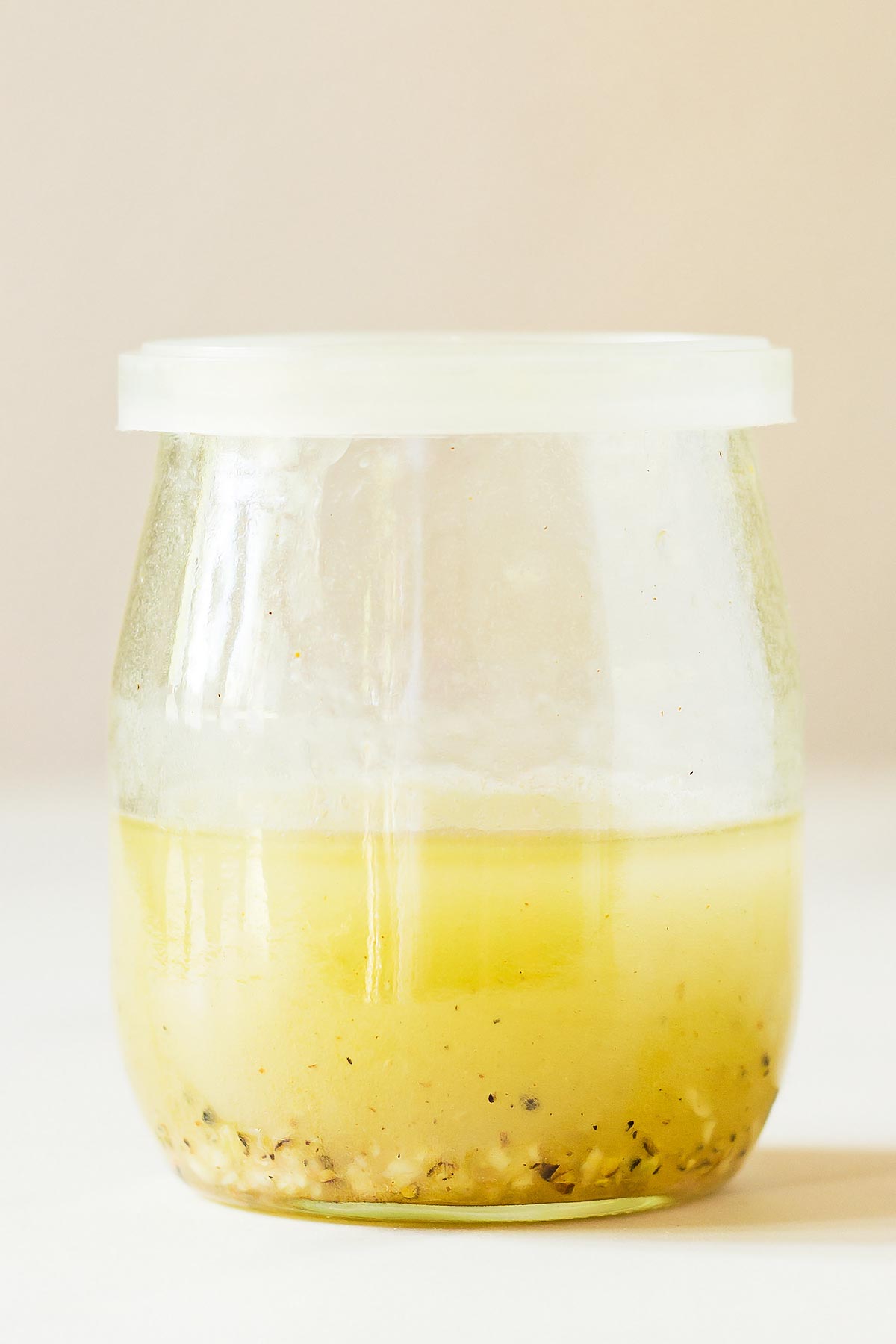 Pearl barley has a nutty taste and chewy texture that makes it delicious in salads and soups. Pearl barley doesn't have its bran layer which means it cooks up faster than hulled barley. As a result, it isn't quite as nutrient-rich as hulled barley, but it is still very good for you. In fact, it includes plenty of fiber, protein, niacin, iron, manganese, niacin, potassium, and more.

The most prominent type of fiber in pearl barley is beta-glucan. This fiber may allow better control of blood sugar and a reduction in cholesterol levels. As a result, it is an excellent food to add to anyone's diet, and in particular, those who struggle with high cholesterol and blood sugar.

Pearl barley is such an underused grain but deserves more attention in the kitchen. Even beyond its significant nutritional profile, it is relatively inexpensive and a single bag of it goes a long way. Other uses for pearl barley beyond this salad include beef and barley soup, savoury porridge, barley risotto, or as a vegetarian filling to stuffed peppers.

How to Serve Barley Tabbouleh

Barley tabbouleh is at its best when you prepare it with in-season produce like tomatoes and cucumbers. As a result, it would be particularly great served in a large bowl as part of a summer barbecue with grilled meat.

Of course, if you would like to go the traditional route with this salad, you could also create your own mezze lunch or dinner with an array of small dishes. Simply set it on the table with items like labneh, dolmades, hummus, kebobs, and more.

Another option would be to serve the salad in a wrap or pita. Tzatziki, tahini sauce, falafel, pork gyros, or grilled chicken are all excellent additions to a wrap consisting of tabbouleh. You could even turn this side salad into a main dish by topping it with some sliced grilled chicken. 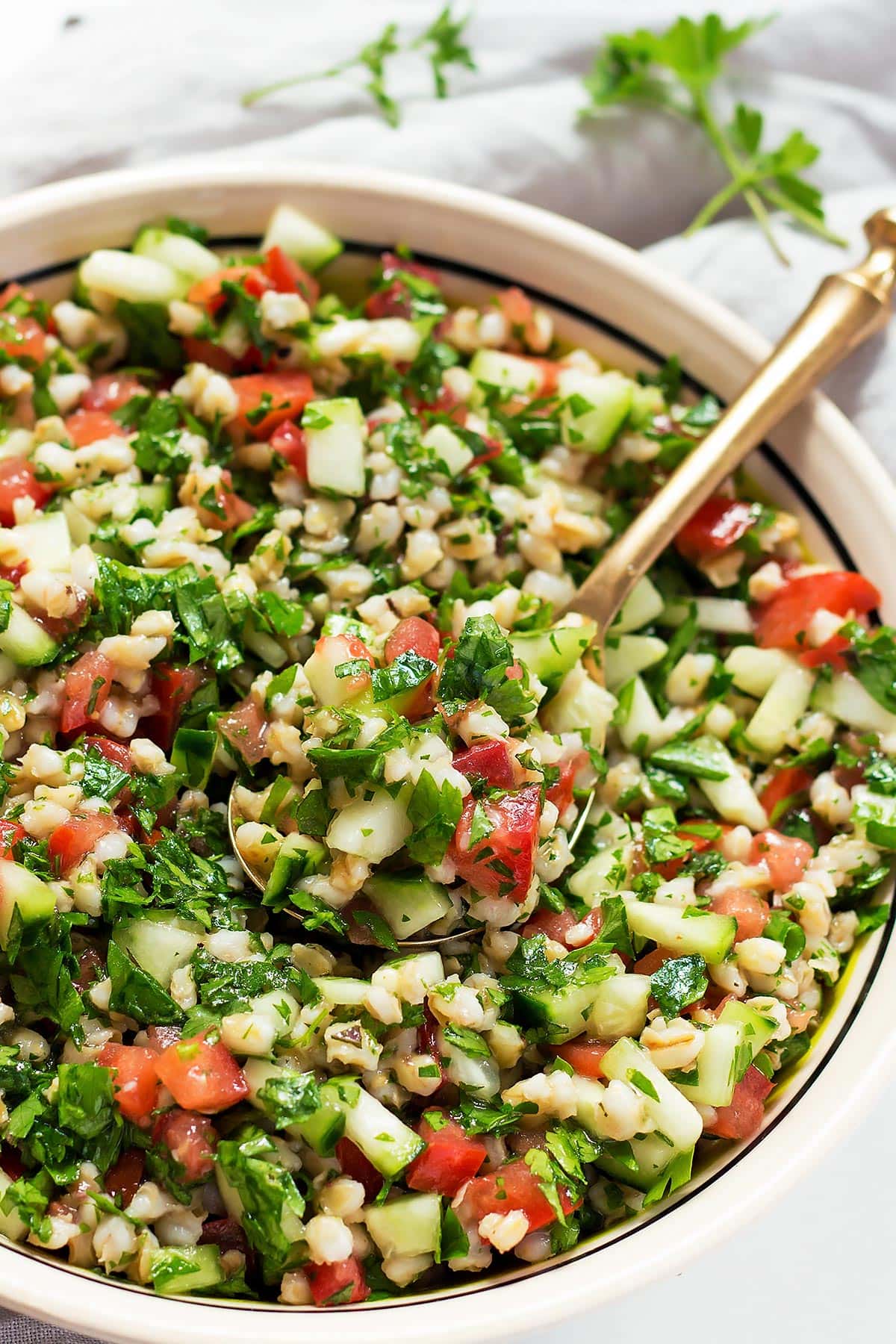 This barley tabbouleh is a unique take on the classic vegetarian salad including bulgur wheat. Despite the difference in grains, it still has an abundance of fresh herbs, tomato, and cucumber. The lemony dressing soaks into the grains making this healthy salad irresistible as side dish or in pitas.