This refreshing Black Currant Ice Cream is a wonderful treat not only in summer. This version is made without refined sugar and can be made with fresh or frozen berries. 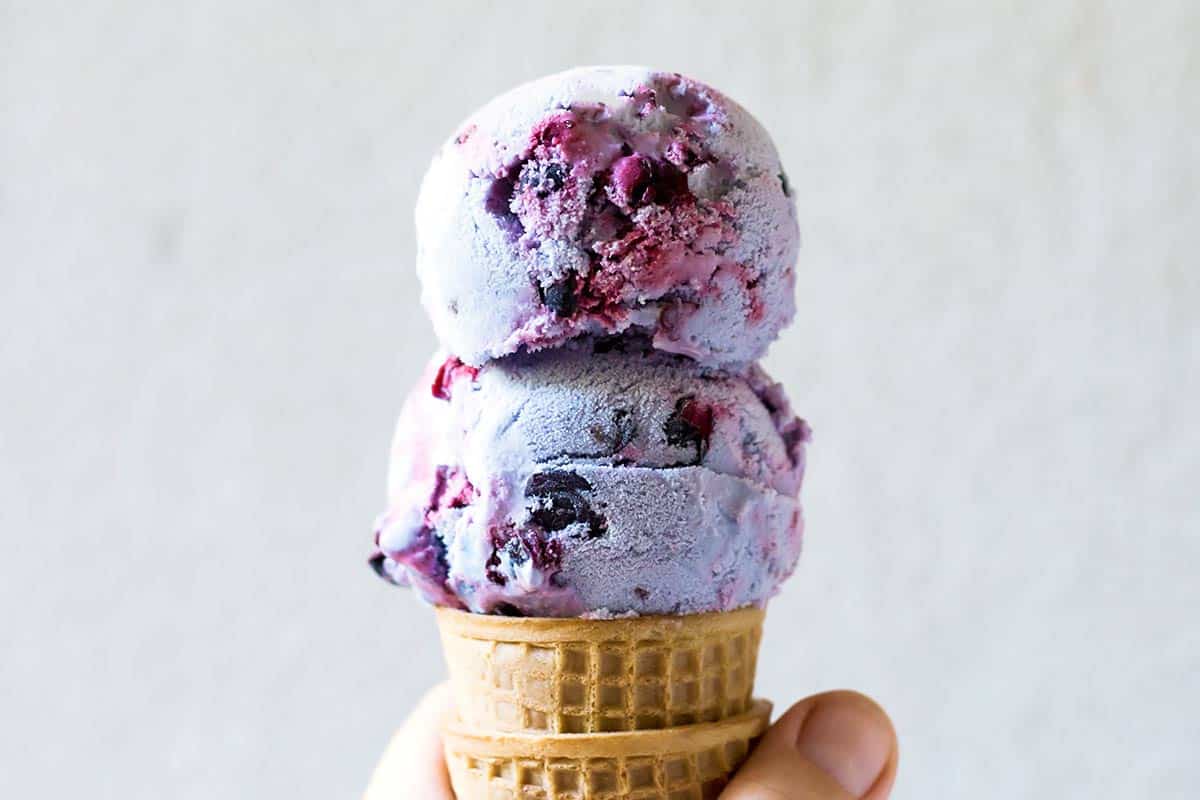 What are black currant berries?

Are you familiar with black currant berries? From what I have seen they are not very common in North America.

Black currants are small berries with a smooth black skin and small edible seeds on the inside. They grow on bushes with a cluster of berries attached to one stem, similar to grapes on a vine.

Currant bushes are native to Northern/Central Europe. There are black, red and white varieties. I grew up on all of these during my childhood in Germany and now my parents are also growing them in their garden in Canada.

I already shared with you the Maple Roasted Baby Carrots and Garlicky Beet Greens that I also made from my parent’s produce while we were housesitting their homestead earlier this year.

My sister let me experiment with her Cuisinart Ice Cream Maker while we were visiting this summer. With my parent’s bushes full of the ripe berries, I had to give a recipe for blackcurrant ice cream a try.

But first, it all starts with making a sort of black currant syrup. 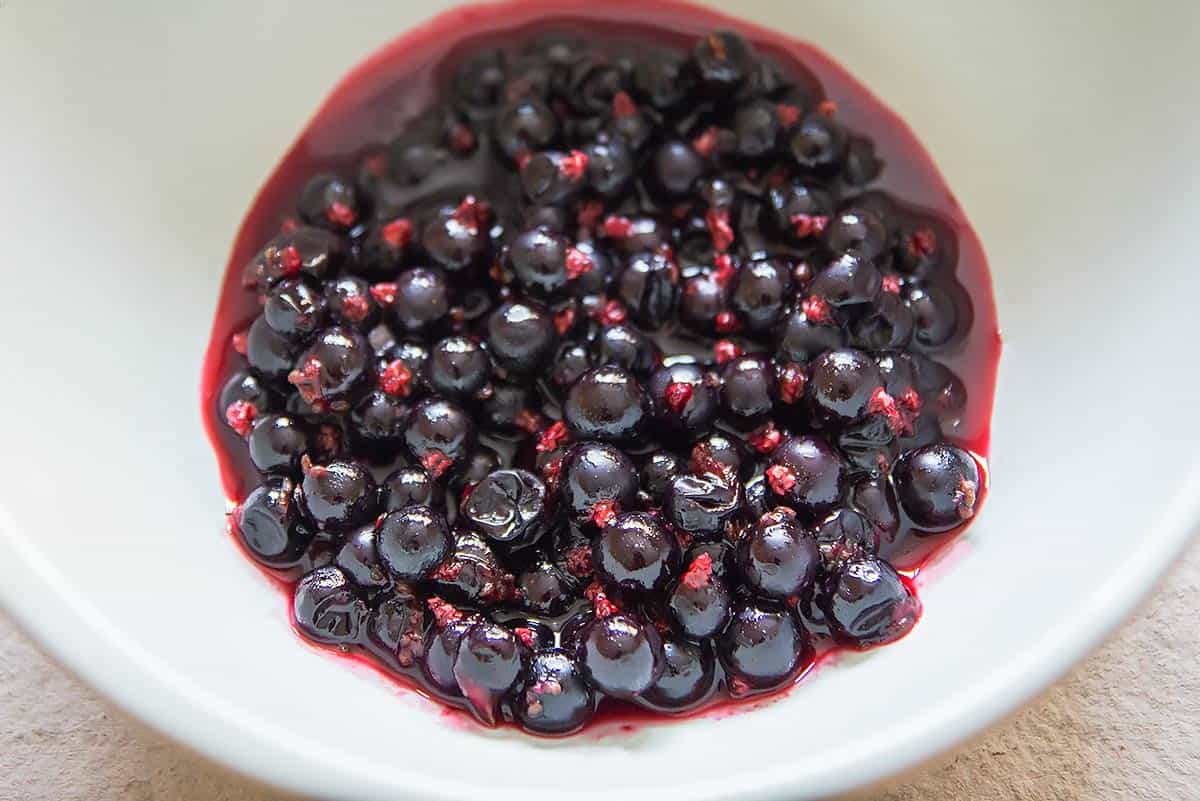 How to make Black Currant Syrup

Fresh black currants (from the bush or Farmer’s Market) can be used just as well as frozen berries.

Since I made this entire currant ice cream recipe without any refined sugar, I used agave nectar for cooking the berries into a syrup and also in the mixture for the ice cream base.

I like texture in my foods, so I cooked the black currant berries until some of them were just starting to burst. You can definitely cook them longer, mash and strain out the skins and seeds, if you want a very smooth ice cream. 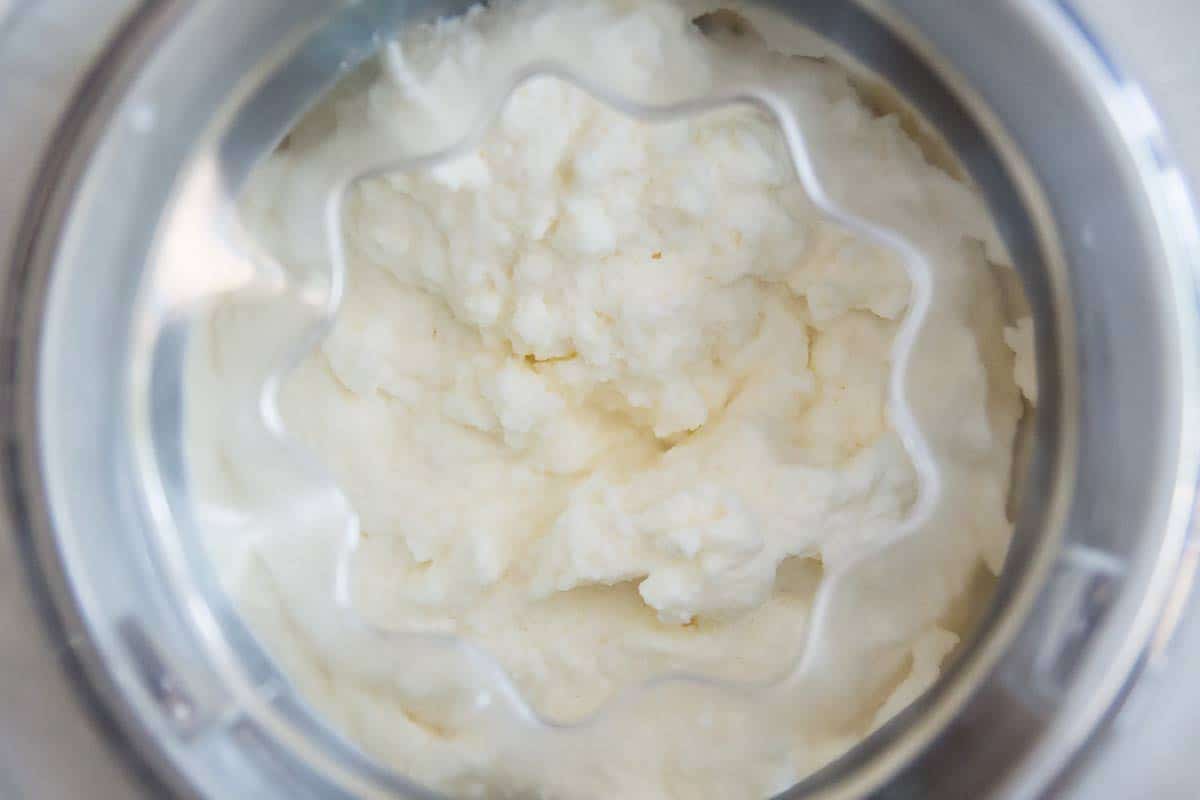 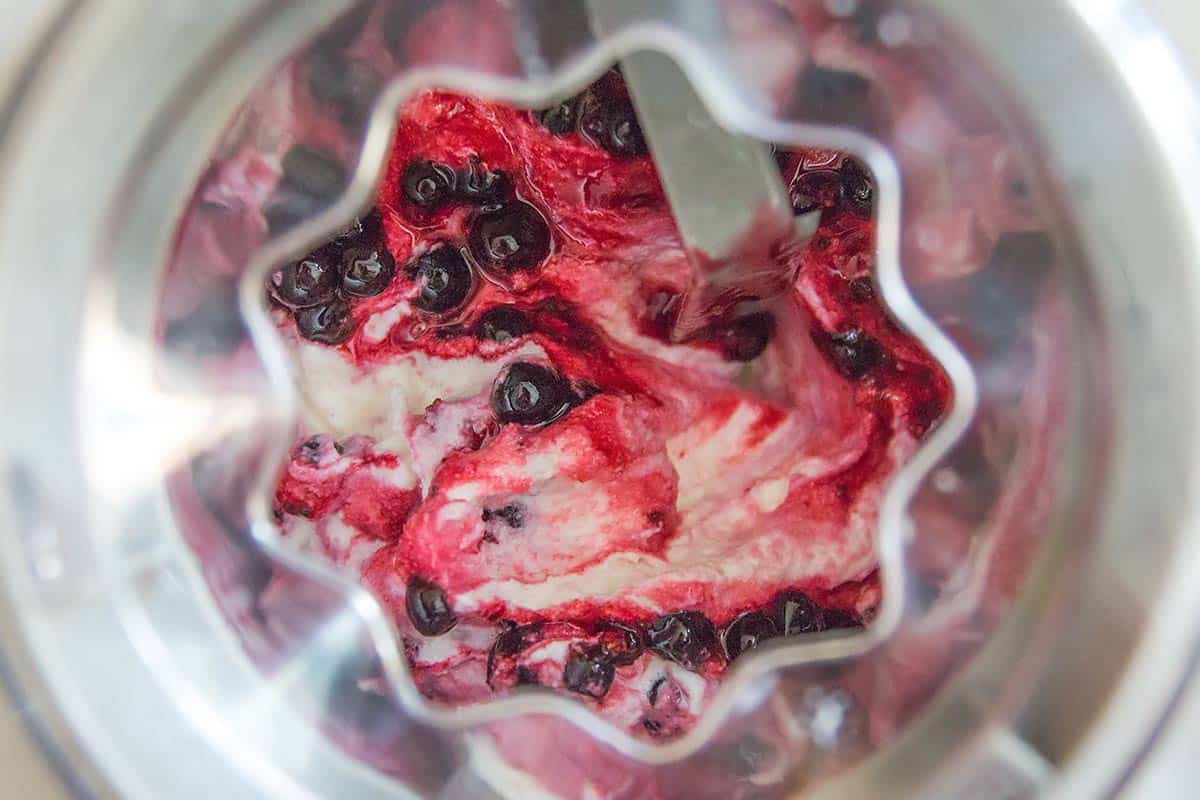 The black currant syrup has to cool before adding it to the ice cream. So I made it first and placed it in the fridge while making the ice cream mixture and churning it in my sister’s borrowed ice cream maker.

This is a simple egg/custard free ice cream recipe. Milk and heavy whipping cream (or half and half cream) are combined with organic agave syrup and vanilla extract. 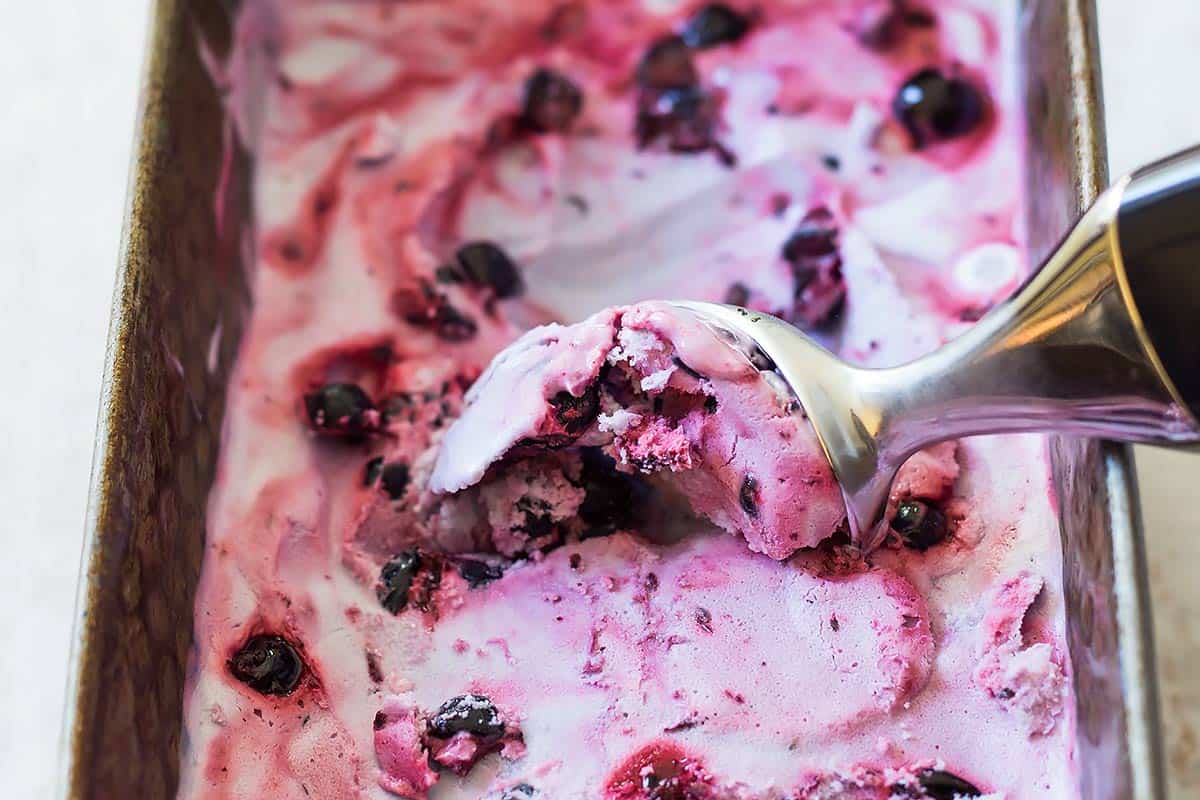 At the end of the churning cycle, add the cooled black currant syrup to the ice cream maker. For a swirled look let the machine turn just 2-3 more times.

Or let it fully mix in the berries for a uniformly purple looking black currant ice cream. Fill the churned ice cream into a freezer safe container (I used a loaf pan) and freeze until fully set before scooping and serving.

You can serve the black currant ice cream by itself in cones or bowls, but it also is a great ice cream to serve alongside some warm cake or slices of pie.

For a homemade ice cream recipe that doesn’t require an ice cream maker, try my No Churn Pumpkin Ice Cream. 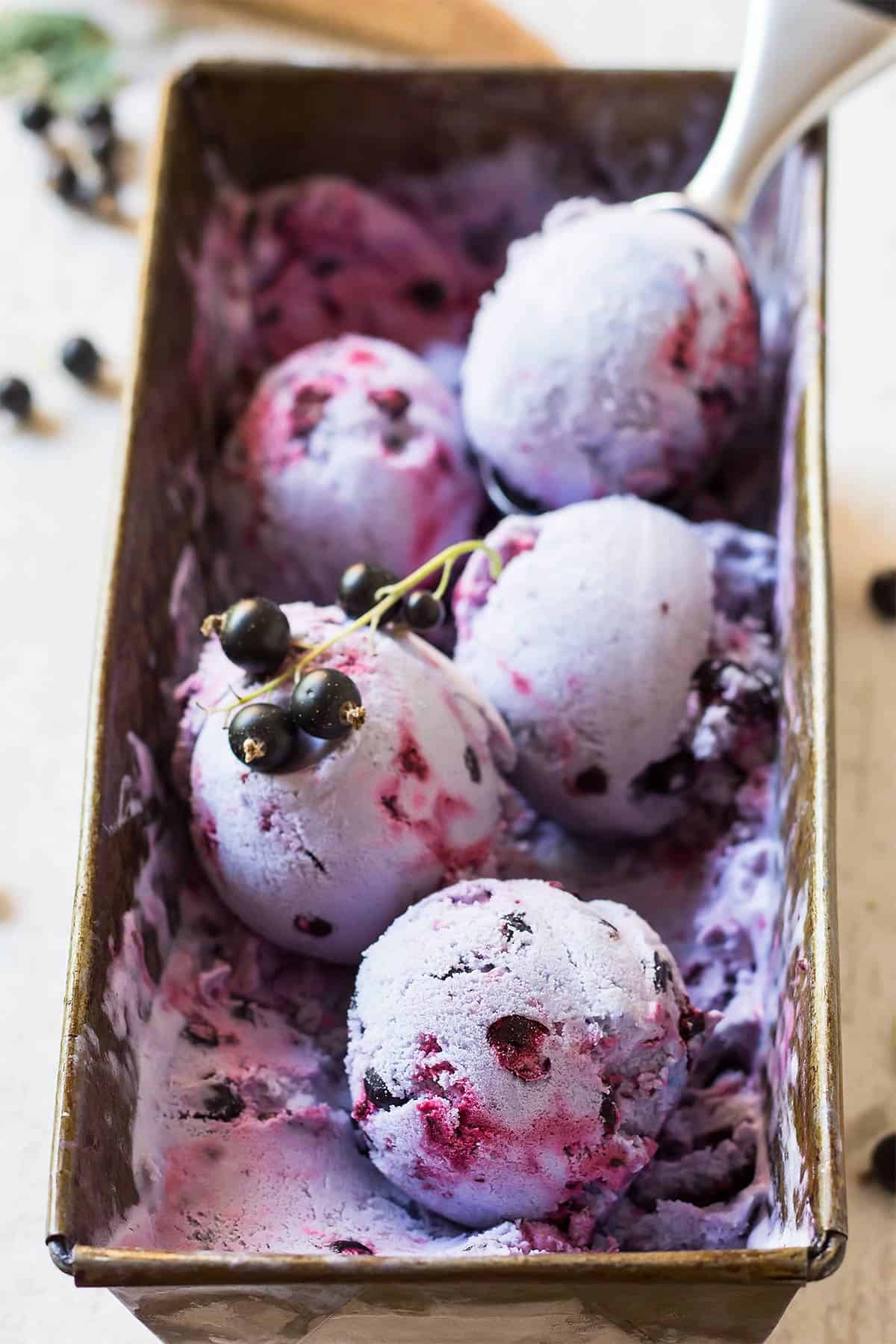 If you are not familiar with black currants and are expecting them to taste like blueberries, be warned: these are a lot more mouth-puckering! They are sweet (sweeter than red currants) but also awesomely tangy at the same time.

This is actually the reason I didn’t like blueberries at first. Growing up with tart berries (like black currants) they were just too sweet for me when we first arrived in Canada.

So this ice cream is not one of those sweet sweet treats. Instead it is a great sweet-tart balance depending on how many currants you get per bite! 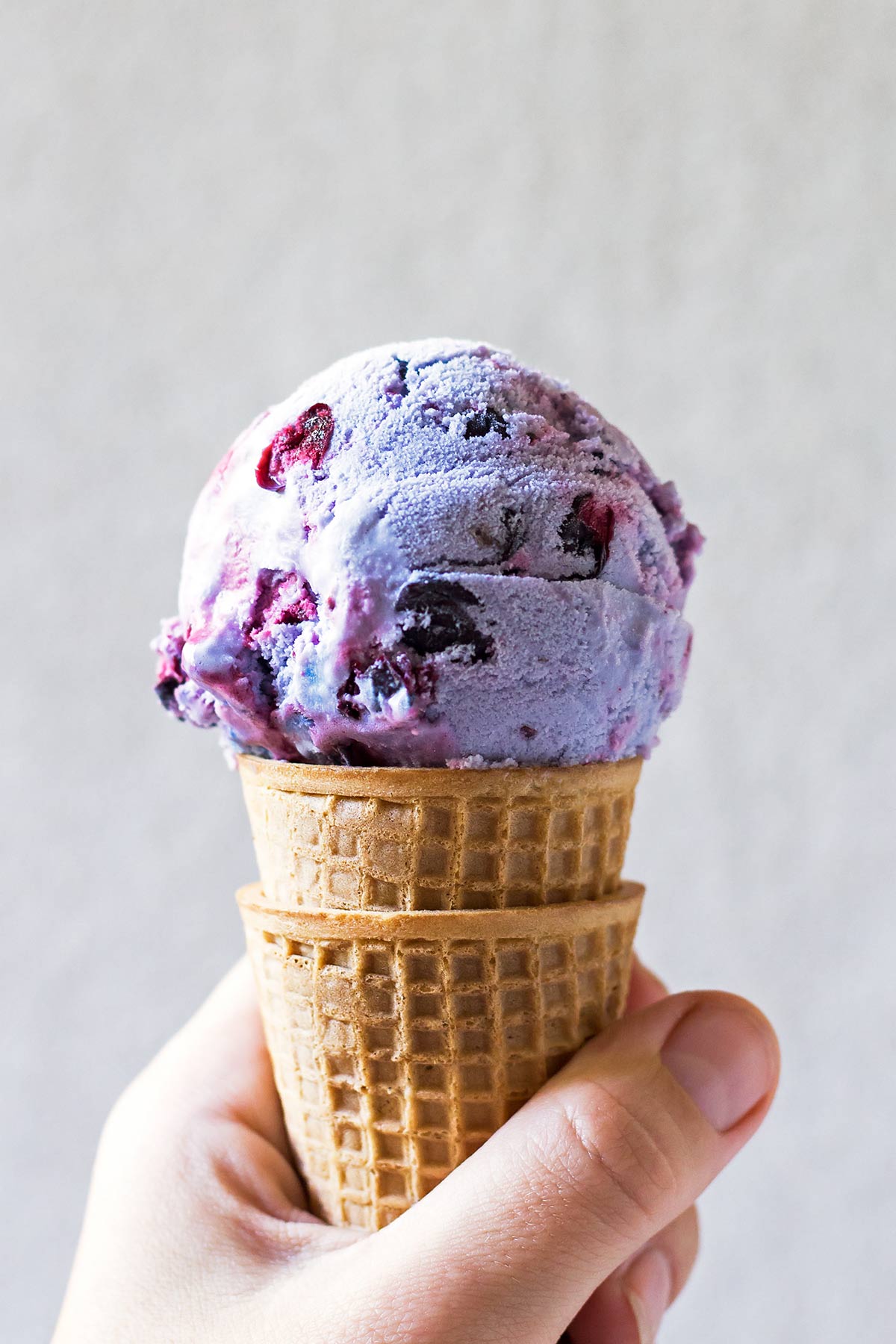 Where to buy black currants and can they be substituted?

I believe black currants are widely available in the UK and Europe, especially during summer time. But like I mentioned before, black currants don’t seem to be very common in North America.

For fresh berries, try your Farmer’s Markets in early summer, especially if you are in the the PNW or similar temperate climate. For frozen berries in the US I found this supplier online.

If you want to make this awesome looking berry ice cream, but have absolutely no way to get your hands on black currants, then you can definitely use a different type of berry. Just keep in mind the sweetness levels. If using a berry that isn’t as tangy as black currants, I would reduce the liquid sweetener amount in the recipe to 1/3 cup. 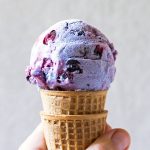 This refreshing Black Currant Ice Cream is a wonderful treat not only in summer. This version is made without refined sugar and can be made with fresh or frozen berries.
Course Dessert
Cuisine German
Prep Time 10 minutes
Cook Time 5 minutes
Total Time 15 minutes
Servings 8 -12 servings
Calories 252 kcal
Author LeelaLicious