Delicious Crispy Shrimp Tacos packed with flavor, using red cabbage, avocado, Panko breading, and a spicy, tangy yogurt sauce that has some kick! You will love this spin on the fish taco. 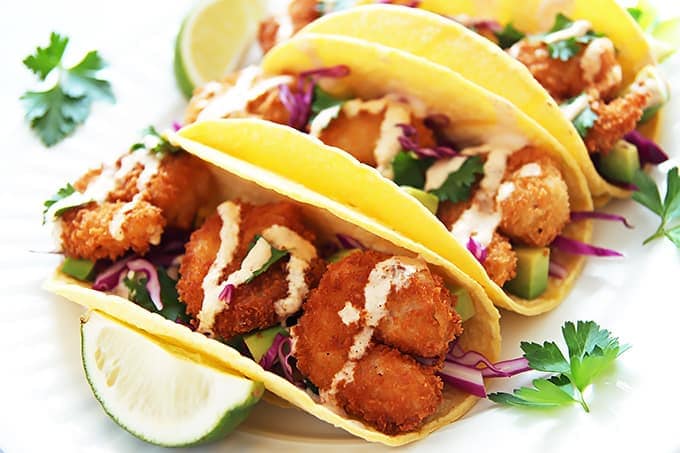 Two dinner recipes in one week? That is very unlike me. Anyone who has followed along for a while, or has browsed the recipe index, will know that I post dessert or snack recipes way more often.

That is totally unintentional though. I usually post whatever I feel inspired to at the moment. This recipe was inspired by a box of Panko bread crumbs. What a muse, huh?

Going through the cabinet, I realized that box had been there for a while and needed to be used. My first idea was for fish tacos. 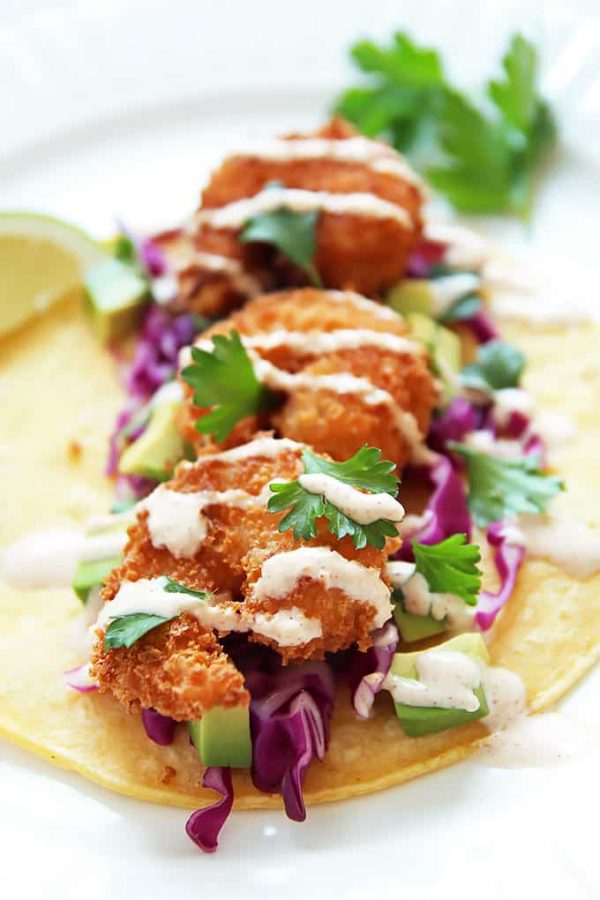 I went out last weekend, bought some delicious cod fillets and started recipe testing. Well, once I had my recipe down, I had to remake it one more time for pictures. So I needed some more fish.

To my dismay, the cod fillets I had bought previously were all gone. I went up and down the fish aisles, looking at both fresh and frozen selection (in a fairly big supermarket), but there was no cod to be had.

Instead of trying to figure out which other fish might work well for fish tacos, I completely changed plans and picked up a bag of shrimp. I knew those would definitely hold up while being breaded and fried (unlike some softer fish that would disintegrate). 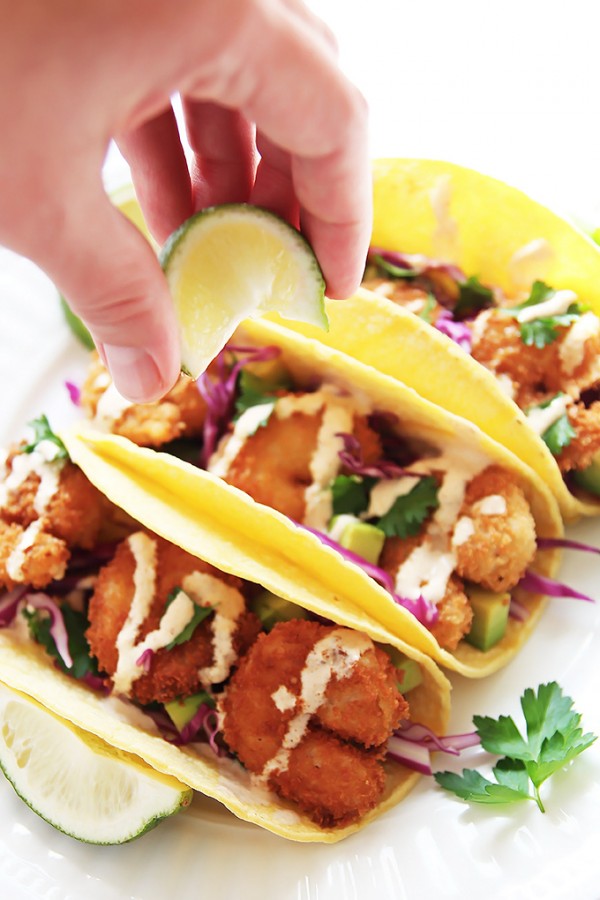 I’ve seen plenty of shrimp taco recipes on Pinterest and in the food blogging world, but not very many with crispy shrimp. So here is my attempt at offering something unique.

To the crispy shrimp in the tortillas I simply added some shredded red cabbage, diced avocado and parsley (cilantro would be more traditional. I love the pops of purple and green that those bring to the plate.

Quick pickled onions would be another great topping option. 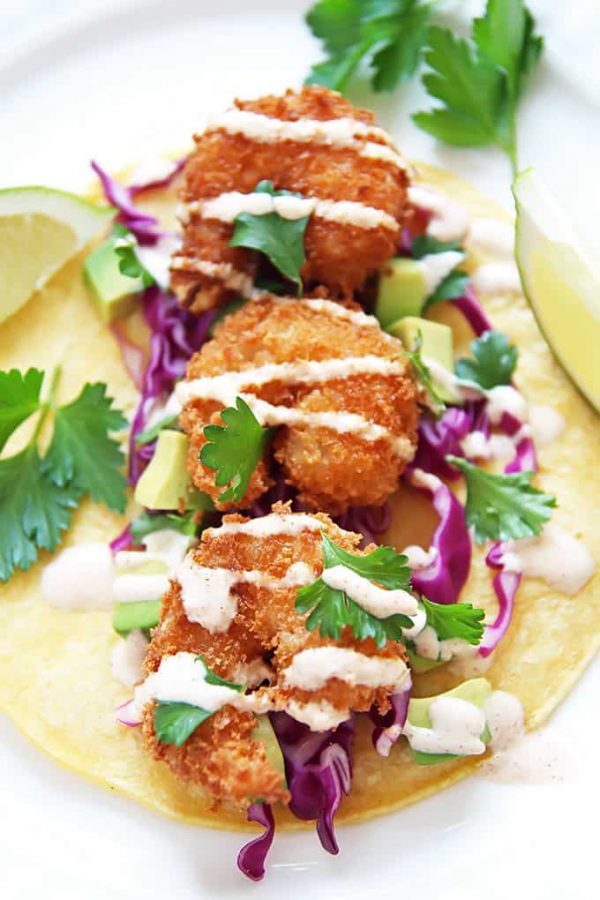 And to round it all up there is a spicy yogurt sauce. I’ve tried using just yogurt for the sauce, but the tart flavour was almost overpowering the spicy effect I was looking for. So I used a mix of mayonnaise and yogurt instead.

This sauce has some real kick to it! Feel free to reduce the spices for a more mellow flavour.

These days I always make my own Instant Pot yogurt for everything.

Also, keep the taco train blasting full-speed ahead with this Gluten-free Taco Seasoning! 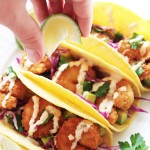 *you can substitute regular chili powder 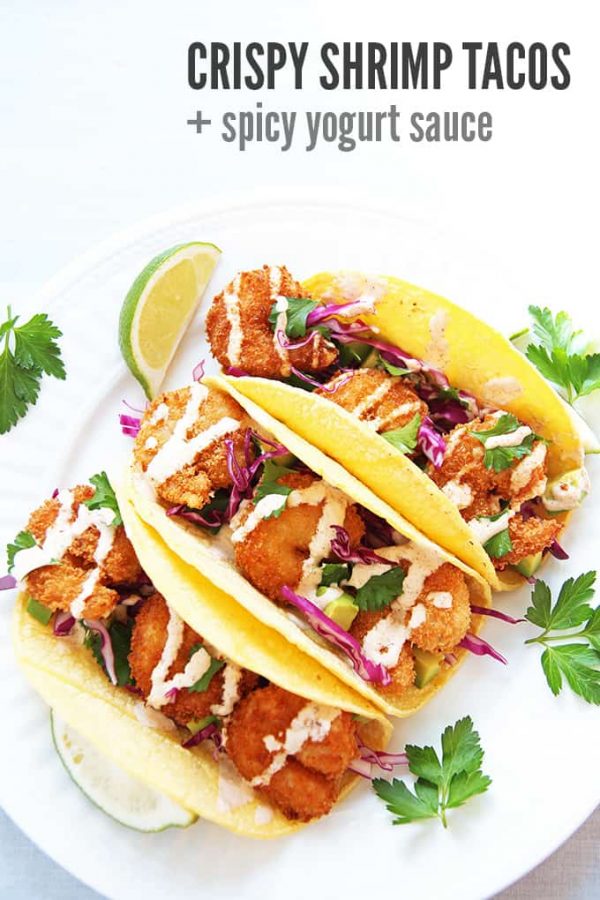