Swiss buttercream frosting is simple to make but can take quite a bit of time. This easy Swiss meringue buttercream provides a reverse method step-by-step, subsequently reducing the whipping time by 10 to 20 minutes. 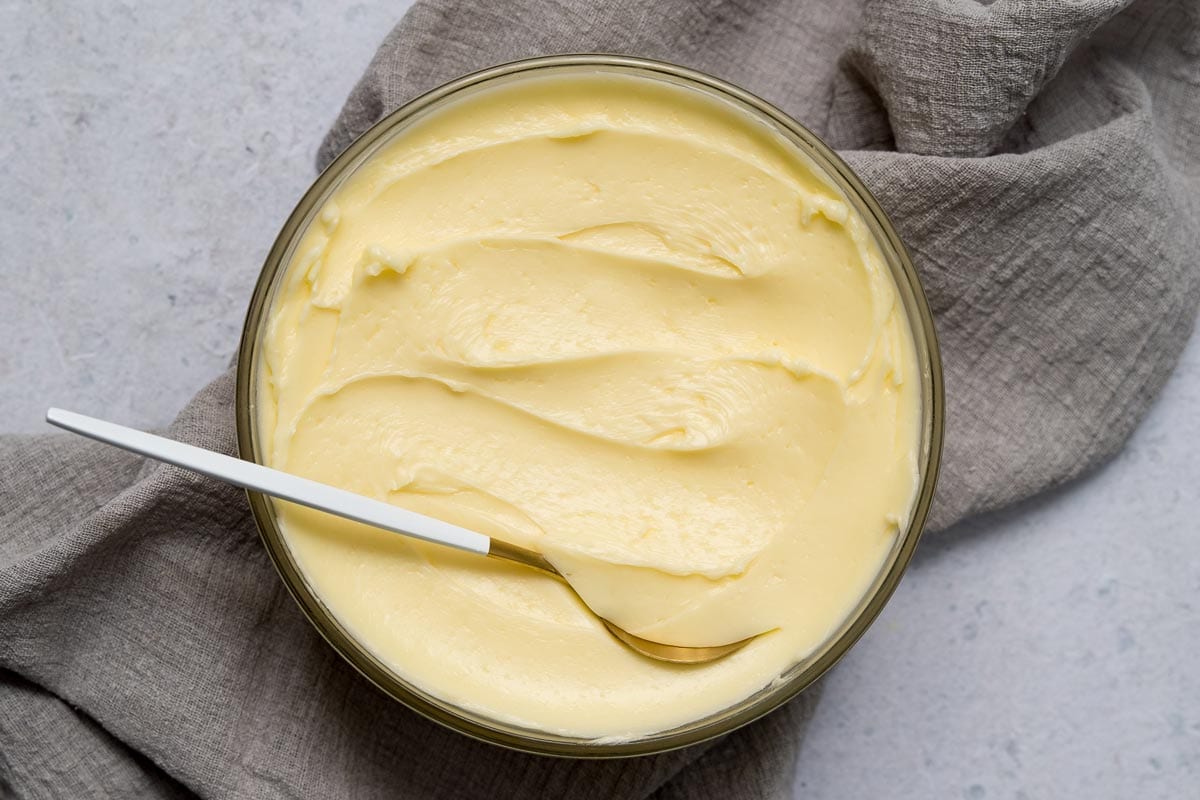 What is Swiss Meringue Buttercream?

Swiss meringue buttercream is a silky and creamy frosting that you can use on cakes or cupcakes for a delectable finish. It generally contains these ingredients: egg whites, granulated white sugar, butter, vanilla, and salt, and this particular recipe is no different. It takes a little more effort than American buttercream, but in my opinion that smooth, non-gritty texture is absolutely worth it.

There are three different methods for making meringue, the French method, the Italian method, and the Swiss method. French meringue involves whipping egg white to soft peaks, and then continue whipping while adding white sugar until it reaches stiff peaks. While quite straightforward, this method can result in grainy meringue if the sugar granules don’t dissolve completely.

Italian and Swiss meringue methods involve heat to ensure the sugar dissolves and the meringue is ultra smooth. For Italian meringue, you boil the sugar down with water into a hot syrup, that then gets drizzled into the egg whites while being whipped. Pouring the syrup while hot is what pasteurizes the egg whites, but also makes this method somewhat dangerous. 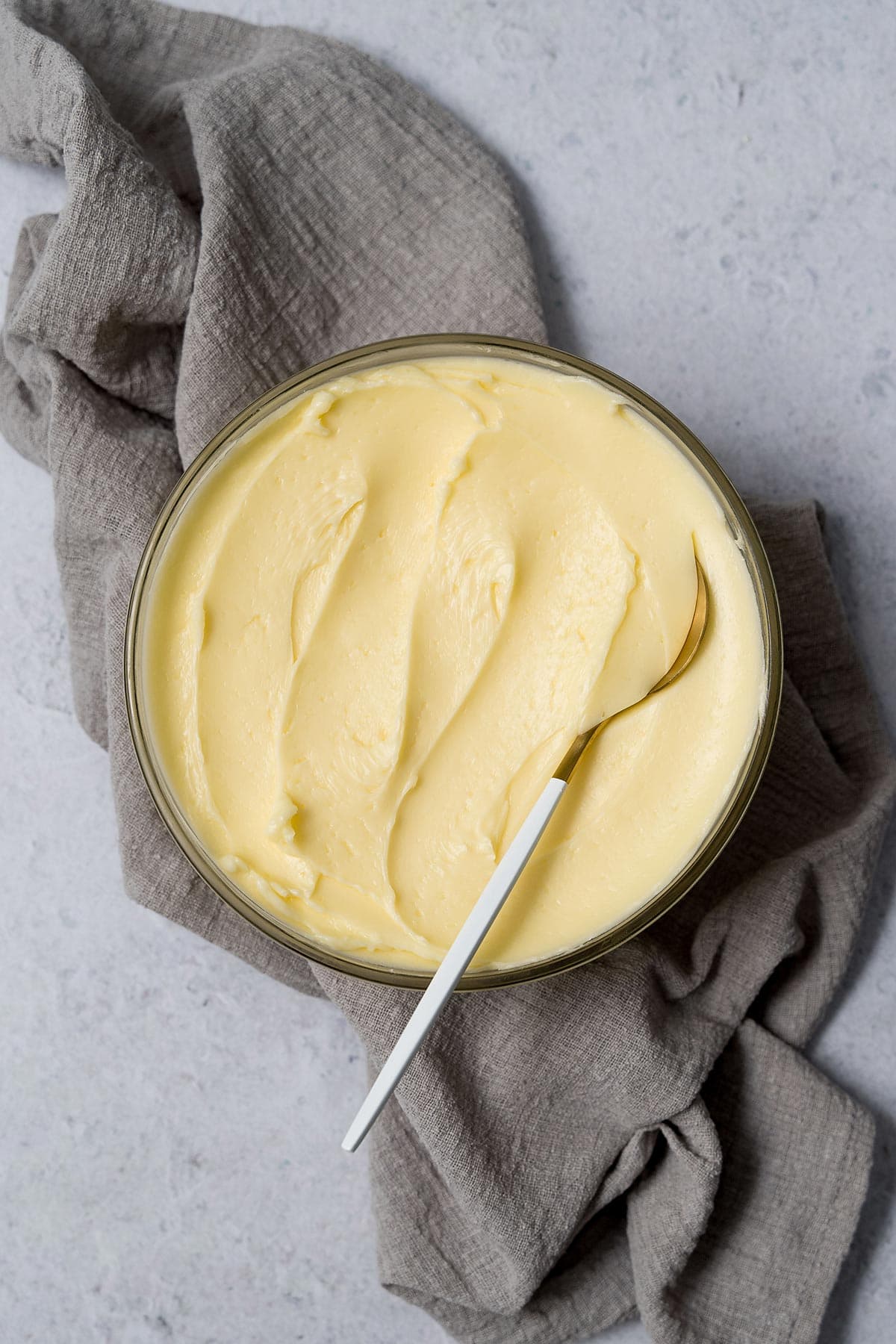 For Swiss meringue, you beat egg whites and sugar together over a bain-marie (double boiler) until the sugar dissolves. The mixture is then whipped with a whisk attachment on medium-high speed until it forms beautiful stiff meringue peaks. It should also be cool after whipping, as not to melt the butter that is added next.

Now softened butter gets added to the meringue. The added grease, of course breaks the meringue at first and gives the mixture a curdled appearance. Then, you continue whipping with a paddle attachment until the mixture emulsifies and is creamy again.

While this process produces beautiful buttercream, it can take a significant amount of time for the broken buttercream to emulsify and come together into a smooth-textured frosting. However, this reverse Swiss buttercream yields similar results while taking a fraction of the time. Here is how to make Swiss meringue buttercream.

How to Make the easiest Swiss Meringue Buttercream 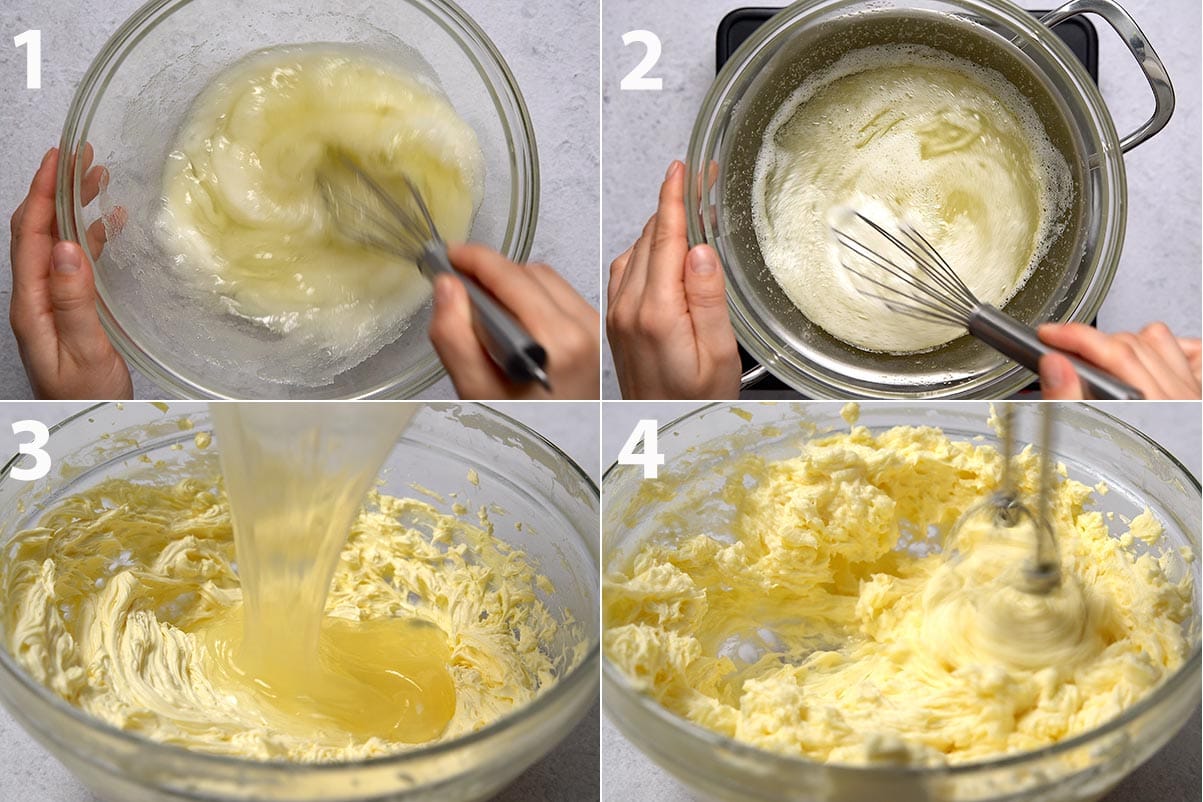 1. To begin making this reverse method Swiss meringue buttercream recipe, whisk the egg whites and sugar together until combined in a medium heatproof bowl.

2. This bowl goes over water bath (a pot of simmering water) and you heat it, while whisking, until it reaches 160°F. For this, an instant-read thermometer is ideal to ensure an accurate temperature reading. I have this one. You could clip a candy thermometer on the side of the bowl as well. Then the egg-sugar syrup goes into the fridge or freezer until it cools down completely.

3. The next step is to whip the butter until it becomes really fluffy and pale in colour. You can do this in a stand mixer with the paddle attachment or with a hand mixer, if desired. Then, you add half of the egg syrup and beat it into the butter until incorporated.

4. Afterward, the next step is to add the remaining egg syrup, vanilla, and salt, beating until you have a smooth buttercream. This takes a lot less time than traditional Swiss meringue buttercream, because you aren’t first making a meringue and then breaking the egg whites, thereby deflating them, and you are giving the butter a head start in being whipped. 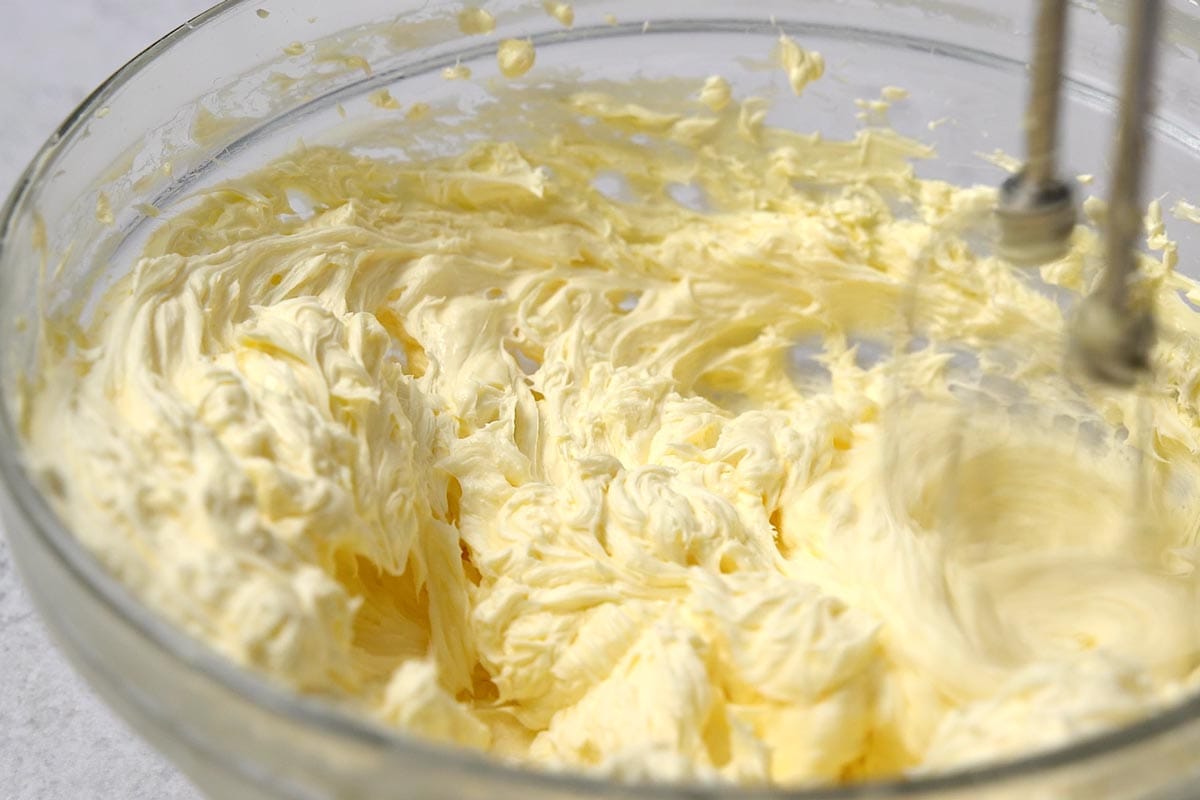 How to Use the Buttercream

This easy Swiss meringue buttercream can be used in the same way as other frostings. Buttercream’s velvety nature makes it perfect to spread over layer cakes such as chocolate or vanilla. It also pipes into beautiful rosettes and decorations on the top of cakes or cupcakes.

If you would like to get creative with using your buttercream, you can also sandwich it between cookies for a quick decadent snack or dessert. You can also whip it with softened cream cheese to enjoy with fresh fruit. Or even add a little cinnamon to the mixture before serving with sliced apples. 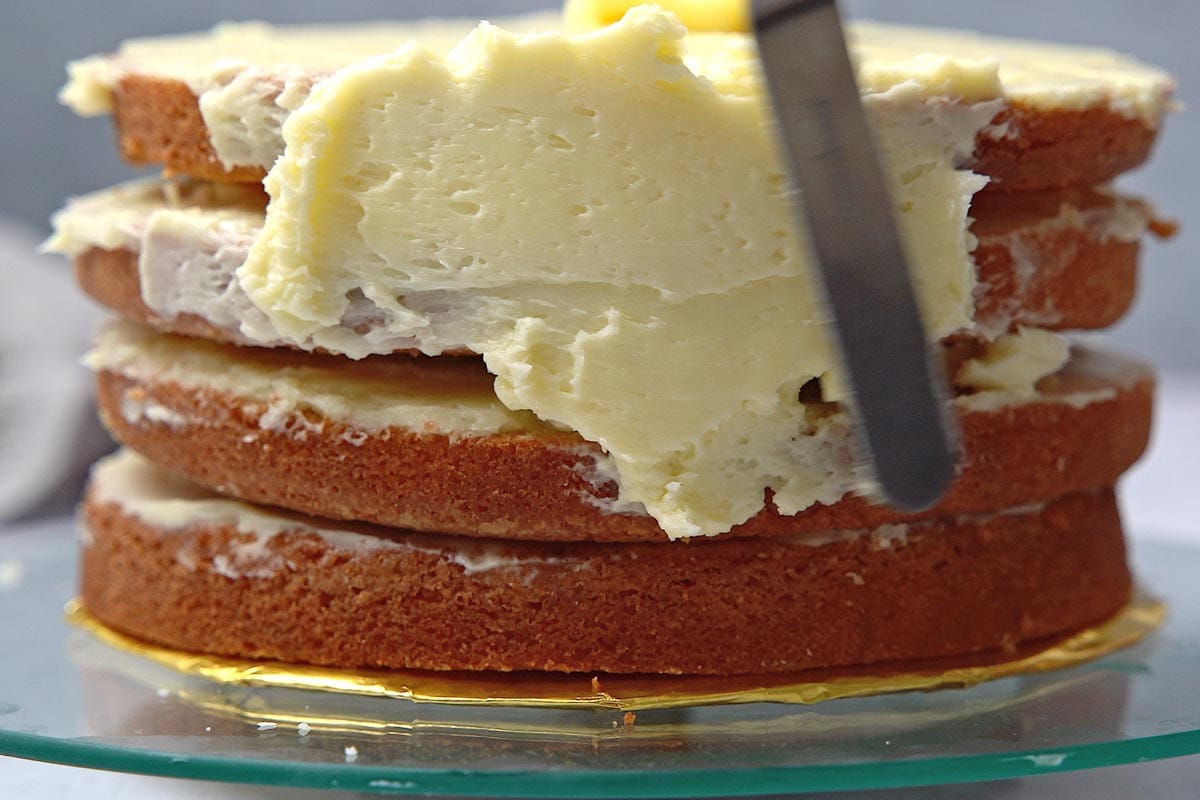 Should the Egg Whites Be Pasteurized?

Can I Flavour the Buttercream?

The base recipe for this Swiss meringue buttercream frosting includes vanilla extract. However, you can flavour it with any extract you like. This makes this buttercream perfect for whatever cake you want to use it for. For example, you could add peppermint extract to the buttercream. This would be great if you are wanting to make a festive candy cane cake for the holidays. However, since peppermint extract has such a strong flavour, I highly recommend that you add a little at a time. And only add as much as needed to get your desired taste. Other excellent flavouring options include almond extract, coconut extract, or orange extract.

You can also use other flavoring agents like citrus zest, melted and cooled chocolate, coffee creamer, jams, fruit purees, and even fruit juice. In my experience this buttercream is able to handle up to about 1/2 cup of liquid add-ins. 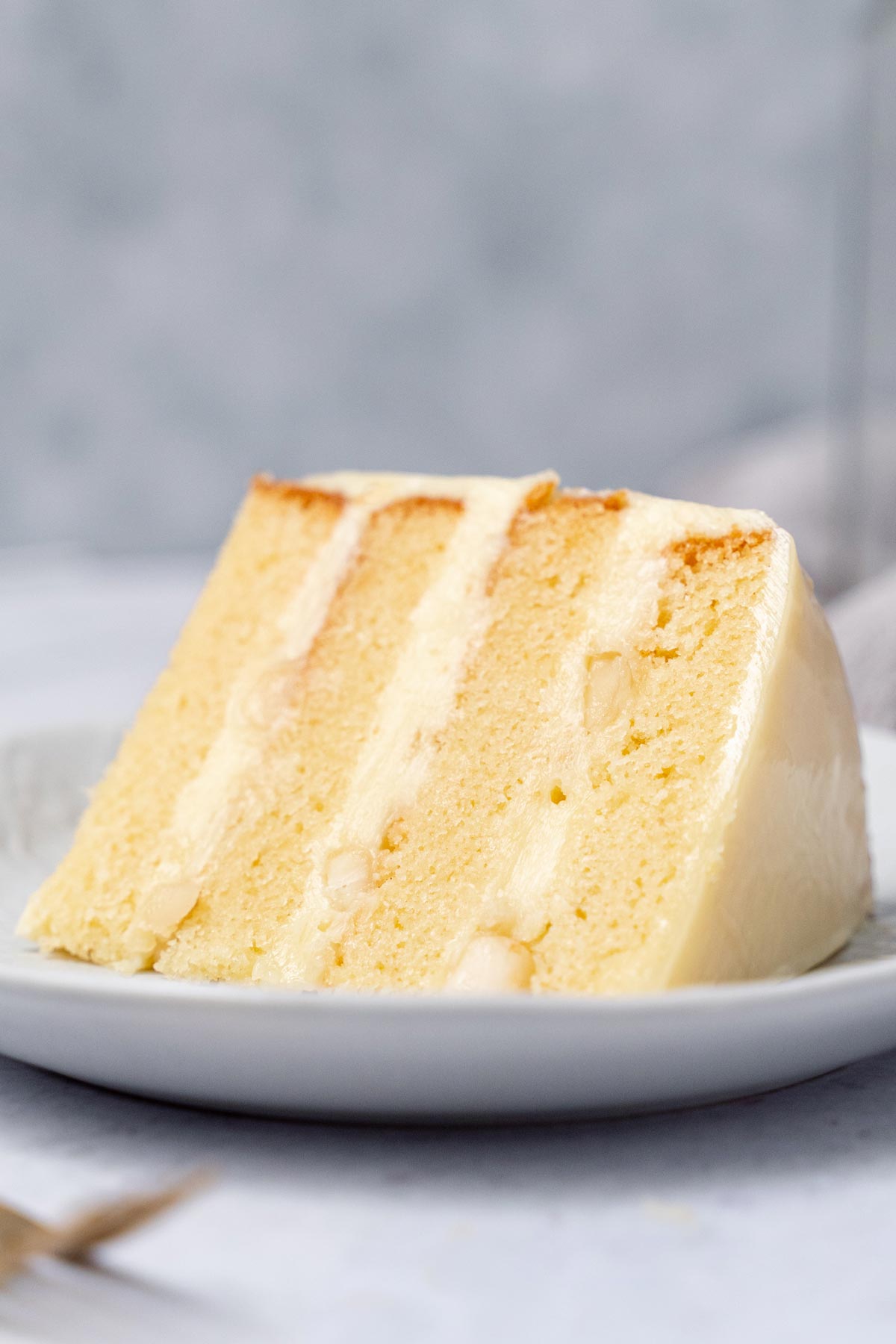 If not using the Swiss meringue buttercream straight away, refrigerate it for up to 1 week until you are ready to use it. You can also freeze it for up to 6 months. Once you are ready to use the refrigerated or frozen frosting, allow it to come up to room temperature  Then re-whip it to return it to its creamy, fluffy consistency, before using to frost your baked goods. 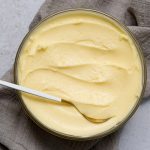 Swiss buttercream frosting is simple to make but can take quite a bit of time. This easy Swiss buttercream provides a reverse method step-by-step, subsequently reducing the whipping time by 10 to 15 minutes.

Add up to 1/2 cup of fruit puree, juice, melted & cooled chocolate etc. to the buttercream for flavoring and coloring