These crispy healthy Cinnamon Rolls with crunchy cinnamon-sugar glaze are perfect for a family breakfast on the weekend. The recipe also comes with a convenient overnight option. 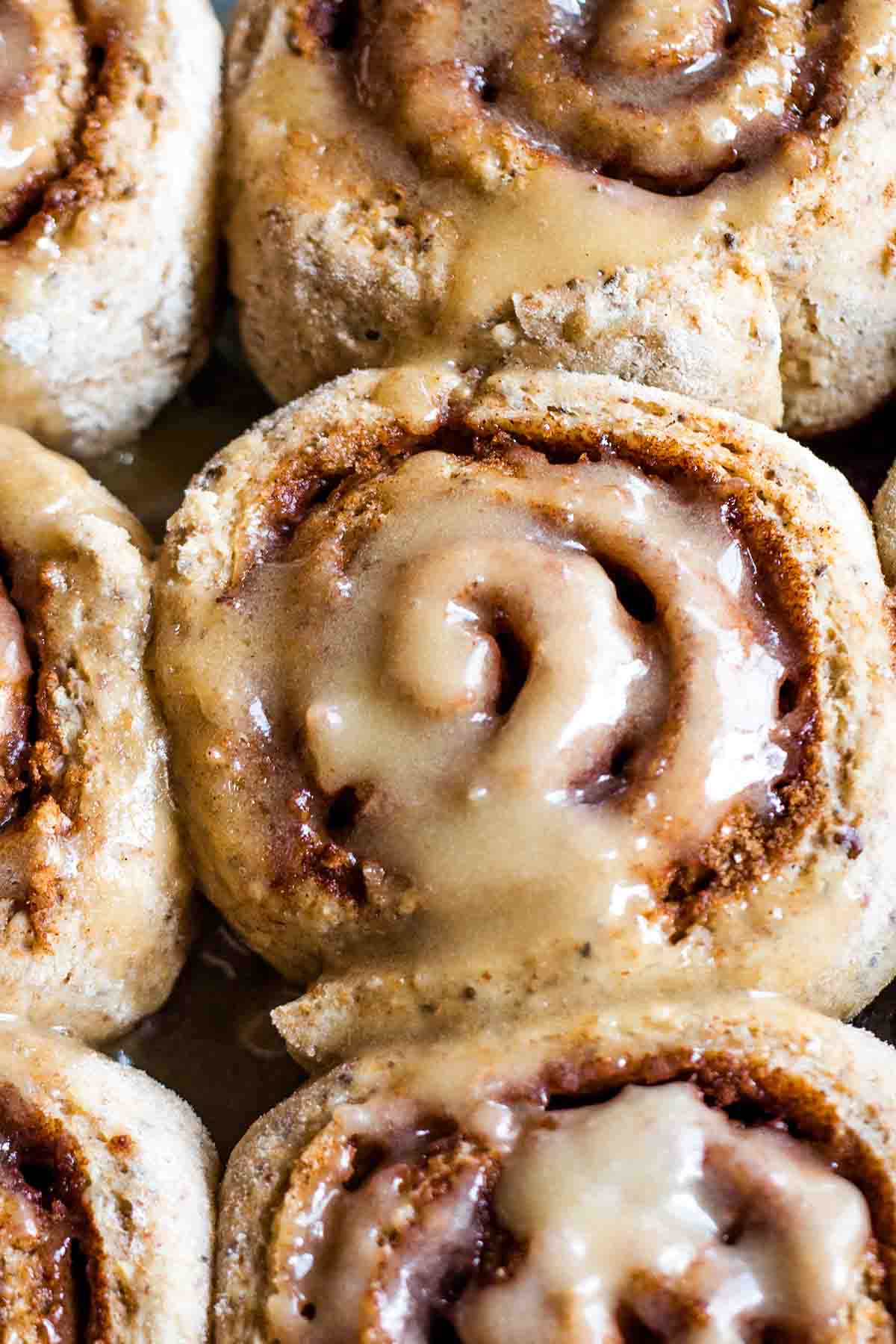 We've had a few really rainy and chilly days here in Calgary. Weather like that calls for comfort food, and it made my mother-in-law crave cinnamon buns. She made a whole big batch that she generously shared with us.

I posted a picture of those cinnamon buns on Instagram and also on my Facebook page. You all loved them there and I got quite a few requests for the recipe.

I would have loved to share my MIL's (mother-in-law) recipe right away; the only problem is - she makes things like this from the top of her head. Isn't that crazy? She is good like that! I respect and admire this a lot.

But she was really intrigued by the interest in her cinnamon buns, that she made them again a few days later. This time she measured out carefully everything that she puts together and asked me to watch and help, so that I could write down the instructions. So now, thanks to our teamwork, you have her recipe right here. 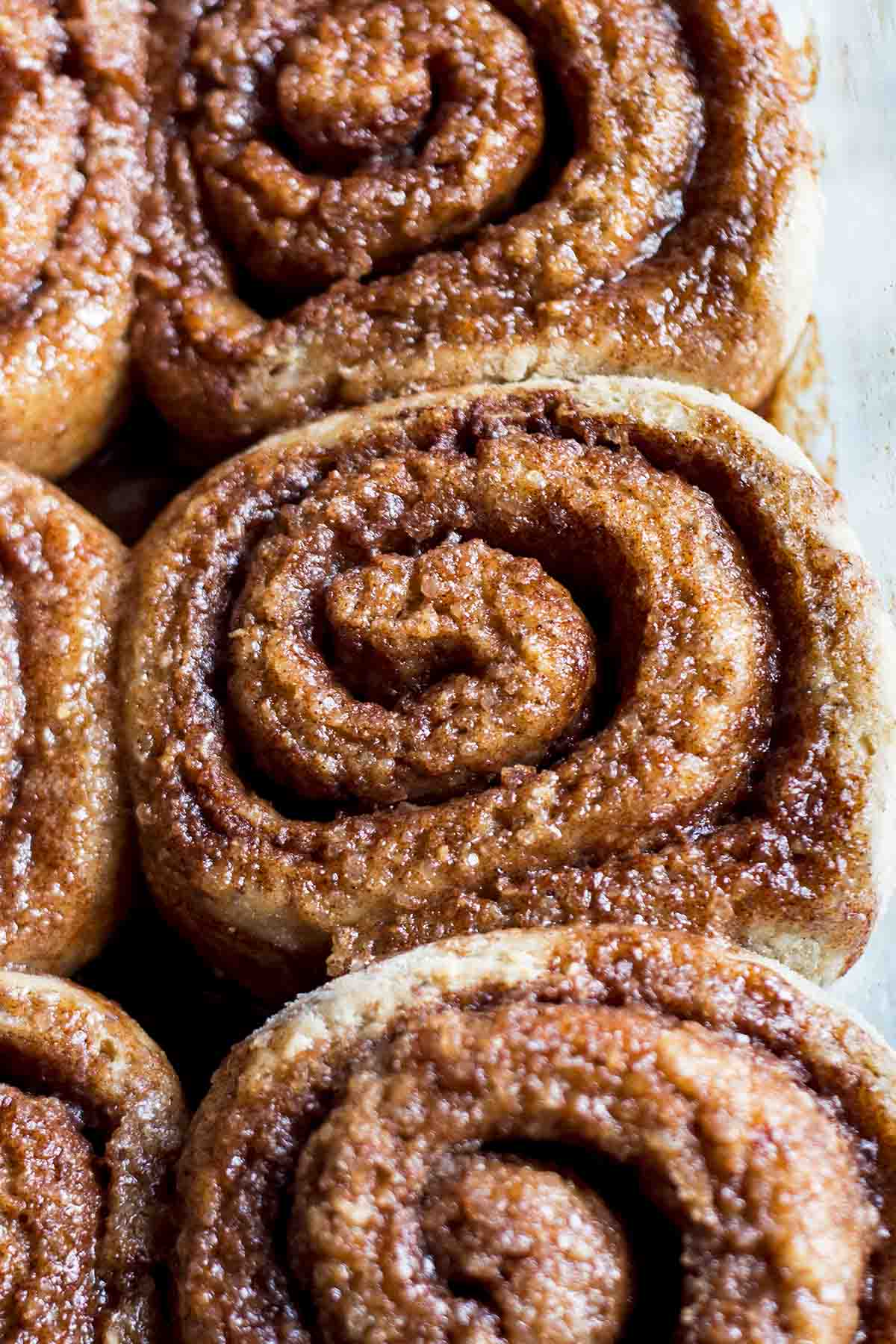 These are not your typical cinnamon buns. They have a bit of a crispier, heartier texture to them as she makes them healthier by adding a mixture of seeds to the cinnamon roll dough - specifically ground flax seed, chia seeds, sesame seeds and also some quick cooking oats.

The seeds and grains are optional, however I highly recommend using them. You can definitely substitute the varieties you have at home - try some poppy or sunflower seeds, for example. One of the great things about this recipe is that you can be flexible with it and it will still taste great. 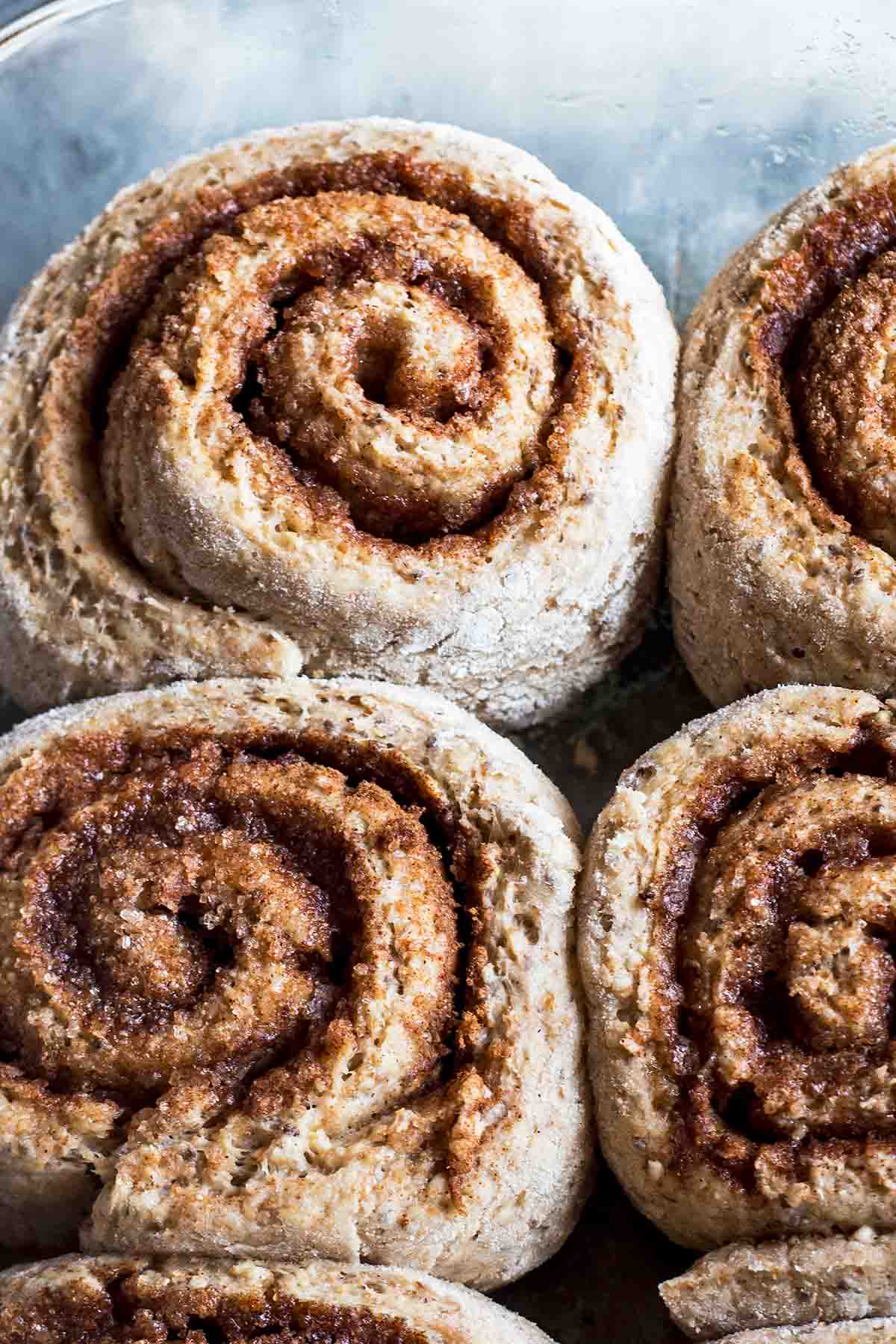 These cinnamon buns are made from a yeast dough, which can scare some people - but please don't be scared! It still is as easy as throwing all ingredients together and kneading them into a dough. If you bought your yeast not too long ago, it should work just fine and there is no need for proofing (however, should proofing just be part of your routine for yeast dough, you certainly can still do it).

There is olive oil in the dough, but you can also use butter or coconut oil.

In place of the glaze, you can also spread a cream cheese icing on the baked and cooled cinnamon buns.

I love to cut my homemade cinnamon rolls in half and spread homemade roasted almond butter on the two halves.

How to make Healthy Cinnamon Buns 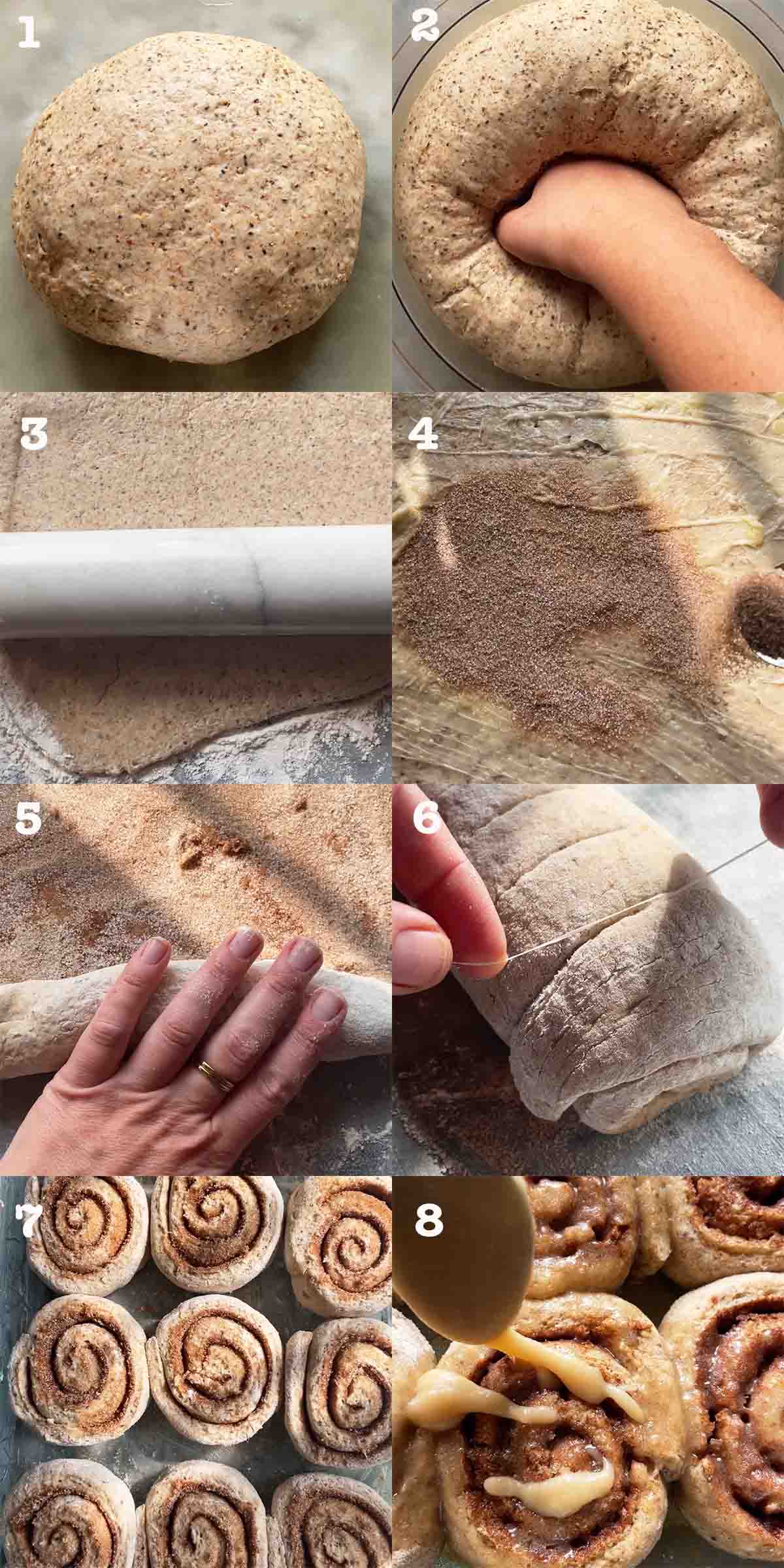 You can also make these cinnamon buns fresh for breakfast without slaving away early in the morning. Prepare the cinnamon buns the night before, and once they are in the pan, cover with plastic wrap and place them in the fridge for the second rise (the cold fridge will slow down the rising process).

In the morning, leave the cinnamon buns at room temperature while the oven is pre-heating. Bake and glaze as directed above. And there you have it! Enjoy this fun take on healthy cinnamon rolls and get baking! 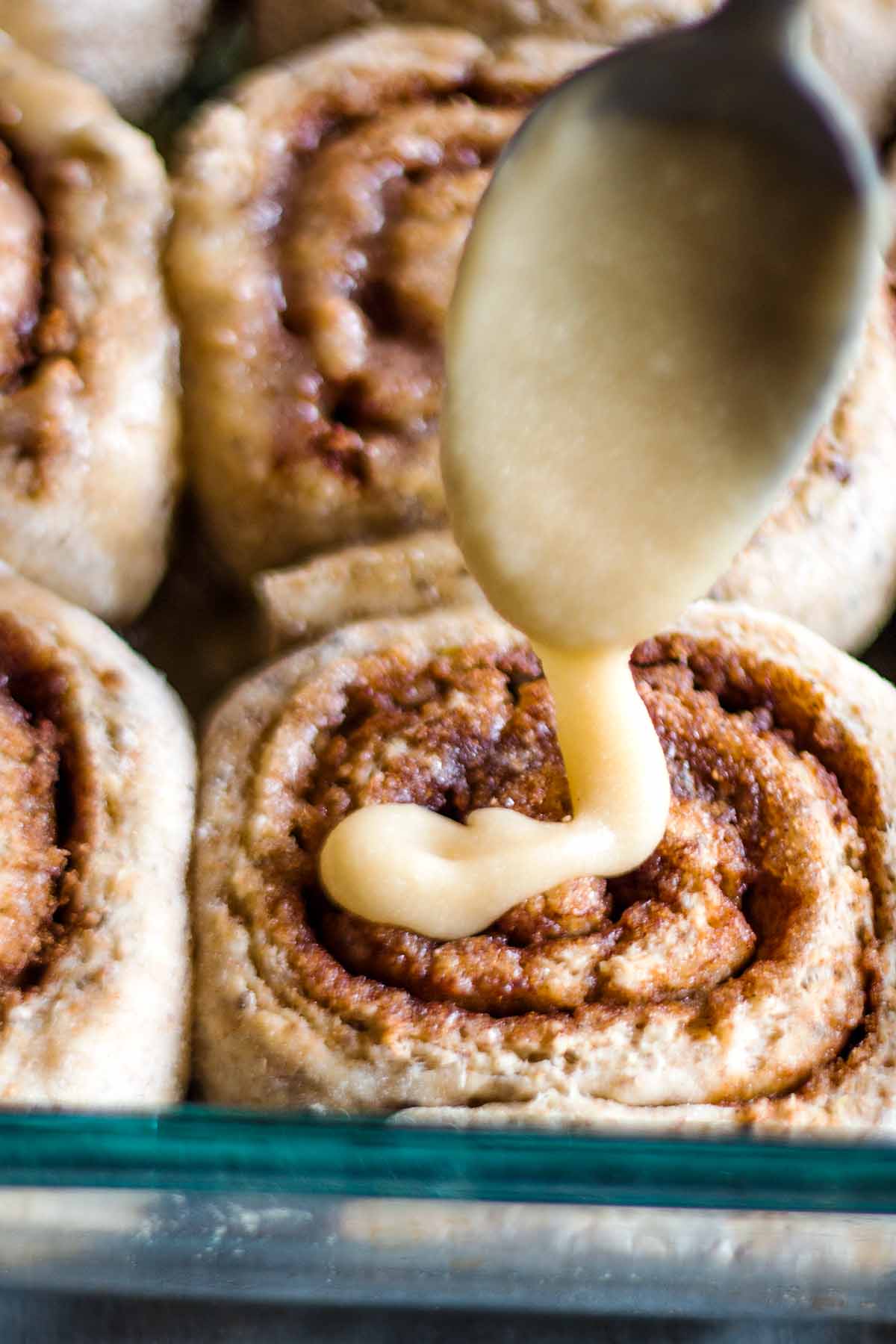 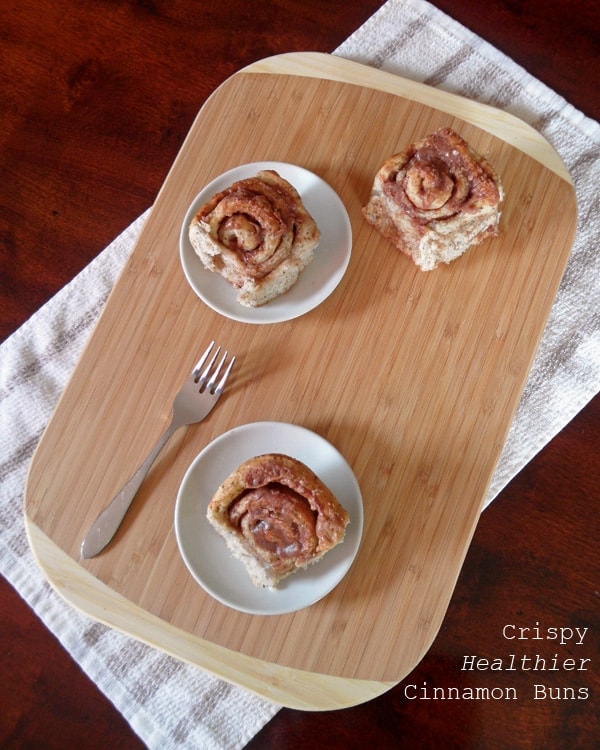 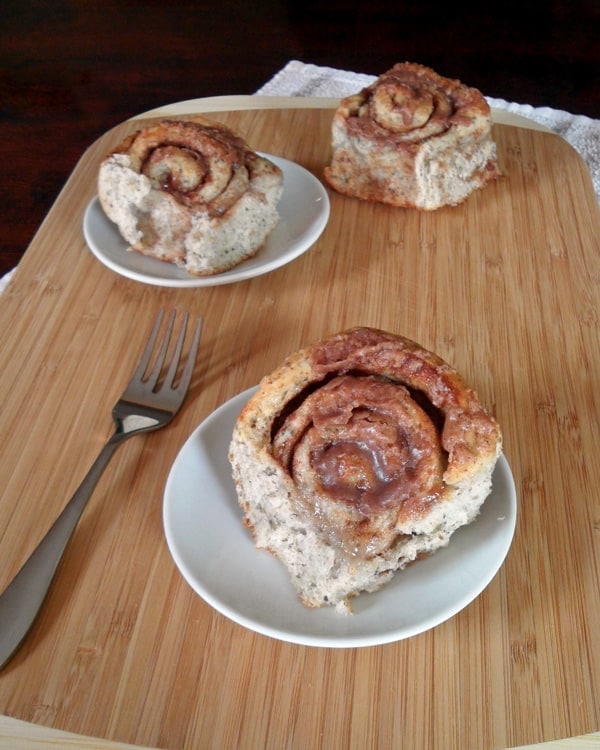 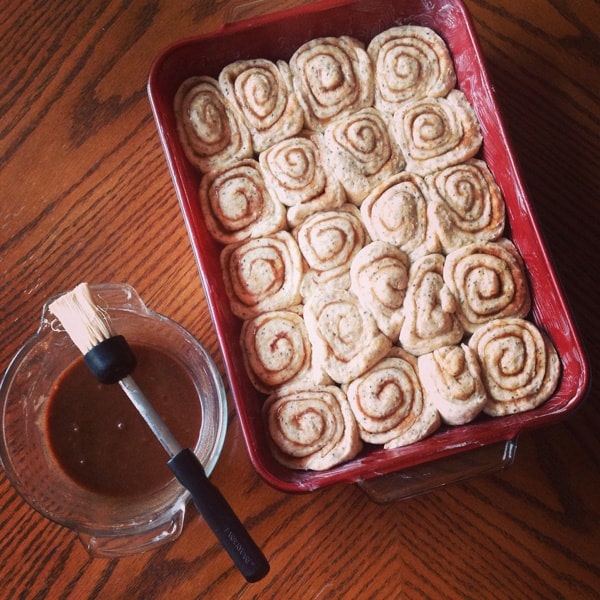 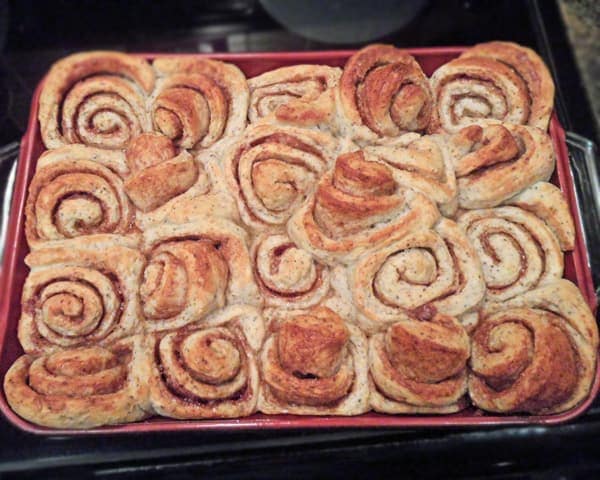 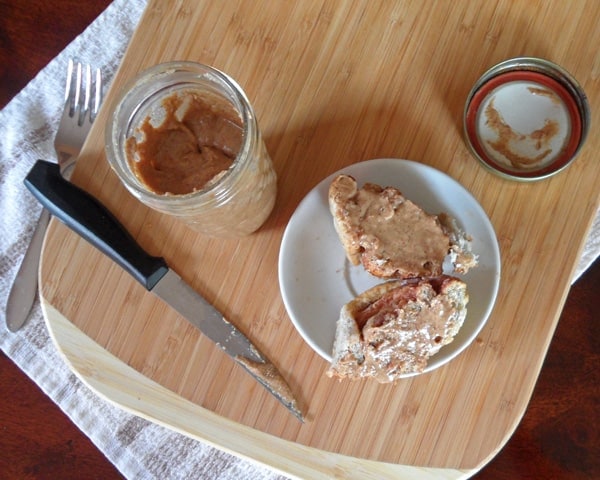 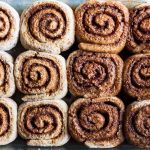 For the Cinnamon Buns:

If you are looking for the crunchy glaze from the previous recipe version:
Combine ½ cup sugar, 1 tablespoon cinnamon, 2 tablespoon melted butter, ¼ cup heavy cream and brush over the cinnamon rolls after 25 minutes bake time. Then return to oven for 5 more minutes.