This Instant Pot Borscht recipe is a quicker and just as delicious version of the classic Ukrainian cabbage beet soup. This gluten-free recipe is made with beef but also includes a meatless vegan option. 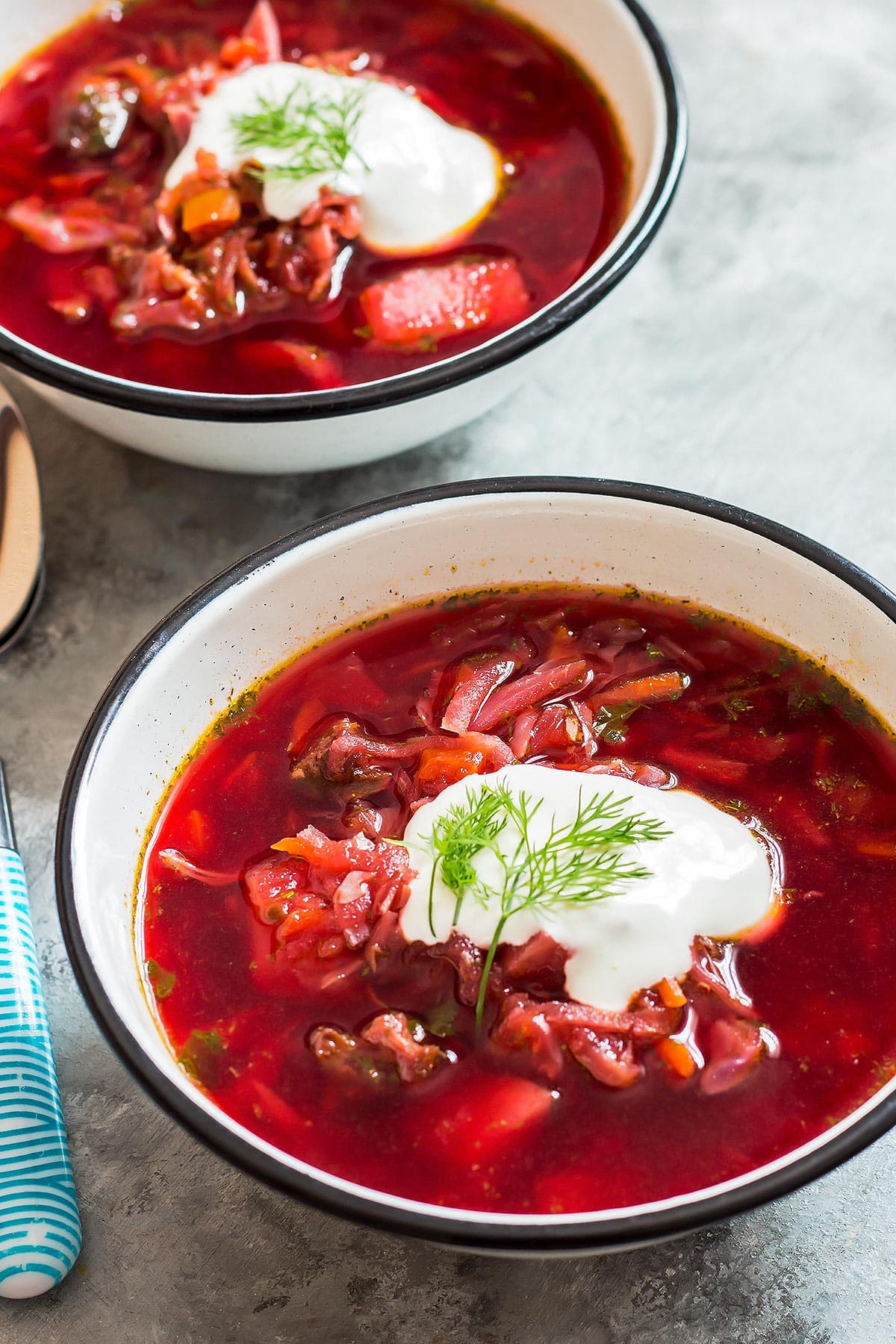 Borscht is a rich vegetable soup with beets, cabbage, and potatoes. It can be made with a variety of meats like stewing beef, oxtail, pork sausage, or chicken. Completely meatless vegan borscht is also not uncommon.

I always thought beets to be an essential ingredient in borscht. For me borscht equals beet soup. But then I had my mother-in-laws borscht and learnt that in her Mennonite tradition beets aren’t part of the borscht recipe.

So I have started to think of it as more of a cabbage soup that may or may not include beets. But today I am sharing with you the traditional borscht I grew up on in our Russian-German household. 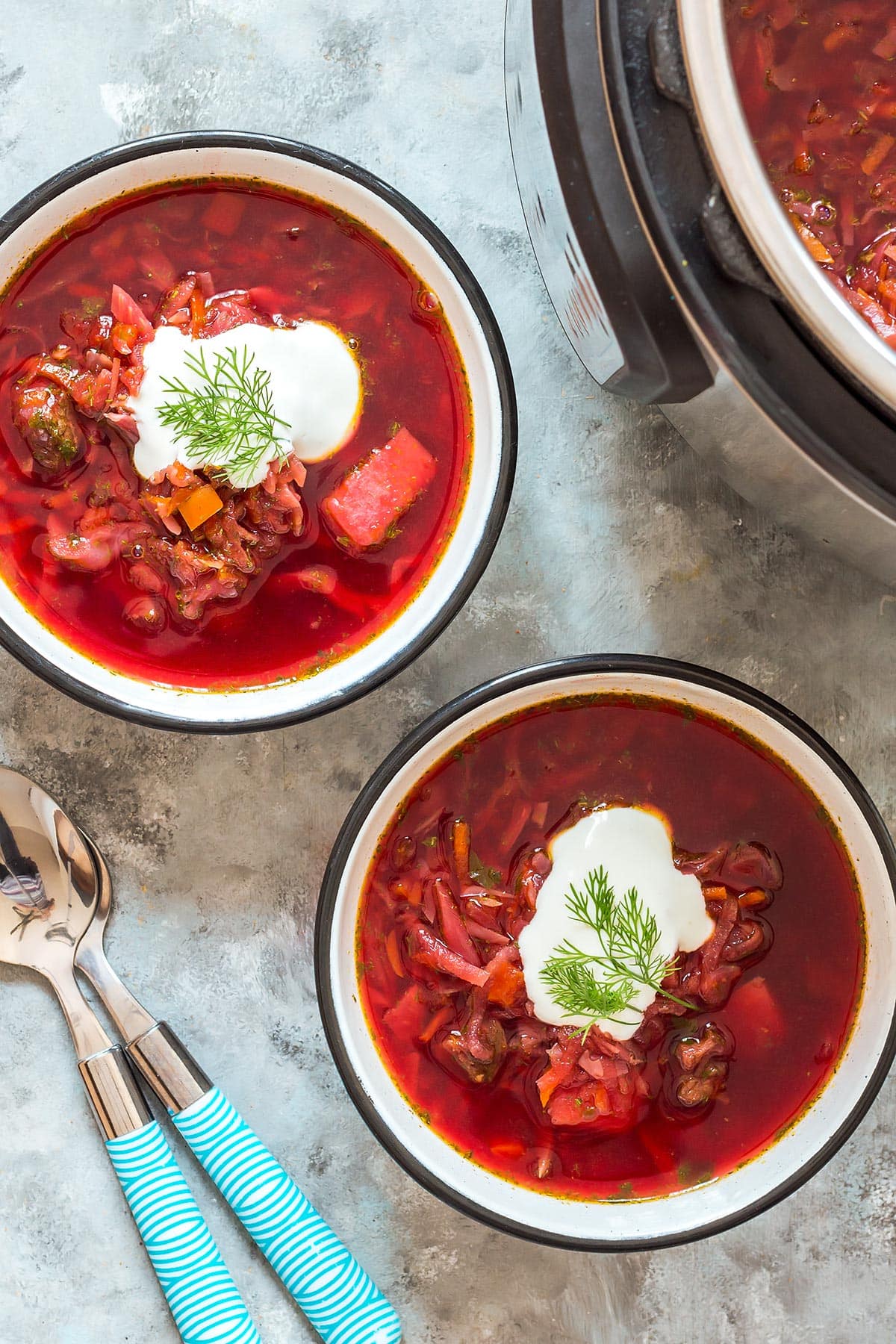 Where does Borscht originate from?

Many think of borscht as a Russian soup and it is in fact Ukrainian in origin and now eaten all over Russia and the countries of the former Soviet Union. It’s popularity has spread from Ukraine to Eastern Europe (Germany and Poland) and all the way Central Asia.

Borscht has a rich history and there are as many variations as families that make it. Even my mother’s version that I grew up on has started to morph as I give it my own little twists.

I add more beets than her making the soup a deep pink in colour, whereas hers has more tomatoes (sometimes she uses tomato paste as a substitute) and therefore an orange-reddish hue. And now I’ve also adapted it for the pressure cooker.

If you’d like to read more on the history of borscht and it’s variations, here is a very interesting article. 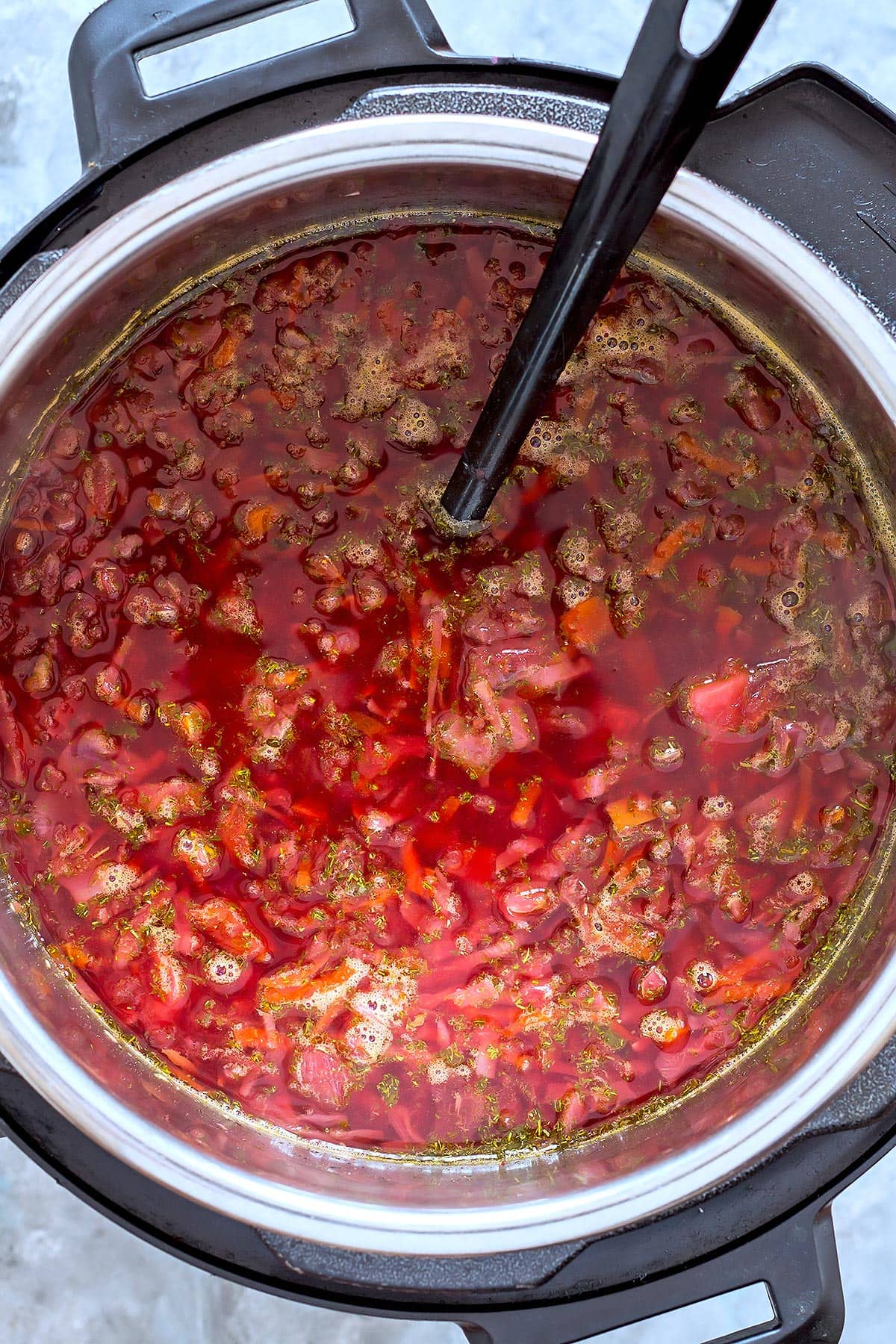 How to Make Borscht in the Instant Pot

Press the Sauté button on the Instant Pot and let it preheat. Once it displays HOT add oil and beef cubes. Brown the meat from all sides.

Add 1 quart (4 cups) of water and deglaze the bottom. Scrape up any stuck on browned bits. Add salt and bay leaves, then pressure cook on high for 30 minutes.

While the meat is softening and a delicious flavourful broth is created, prepare all your vegetables. Cutting methods and shapes vary a lot for different borscht recipes.

In our family we only left the potatoes in chunks, everything else was diced (onion & tomato) or shredded/grated (cabbage, beets, carrots).

You can use a box grater and it might take as long as the meat is cooking. Therefore I much prefer using my food processor with the shredding disc.

Once the timer is up on the meat, do a staggered quick release. Meaning you turn the pressure valve to venting. But as soon as water/broth starts to escape with the steam, turn the valve back to sealing again.

Wait a little while, then release again as above. Repeat this until all the pressure can release without any water spewing out at the same time.

Then open the lid and remove the bay leaves. Stir in all your prepped veggies and herbs. Fill the Instant Pot with water up the the pressure cooking fill line (2/3 full). Cook on high for 5 more minutes.

Then do another staggered quick release, or let the pressure release naturally for 15 minutes, then quick release any remaining pressure. 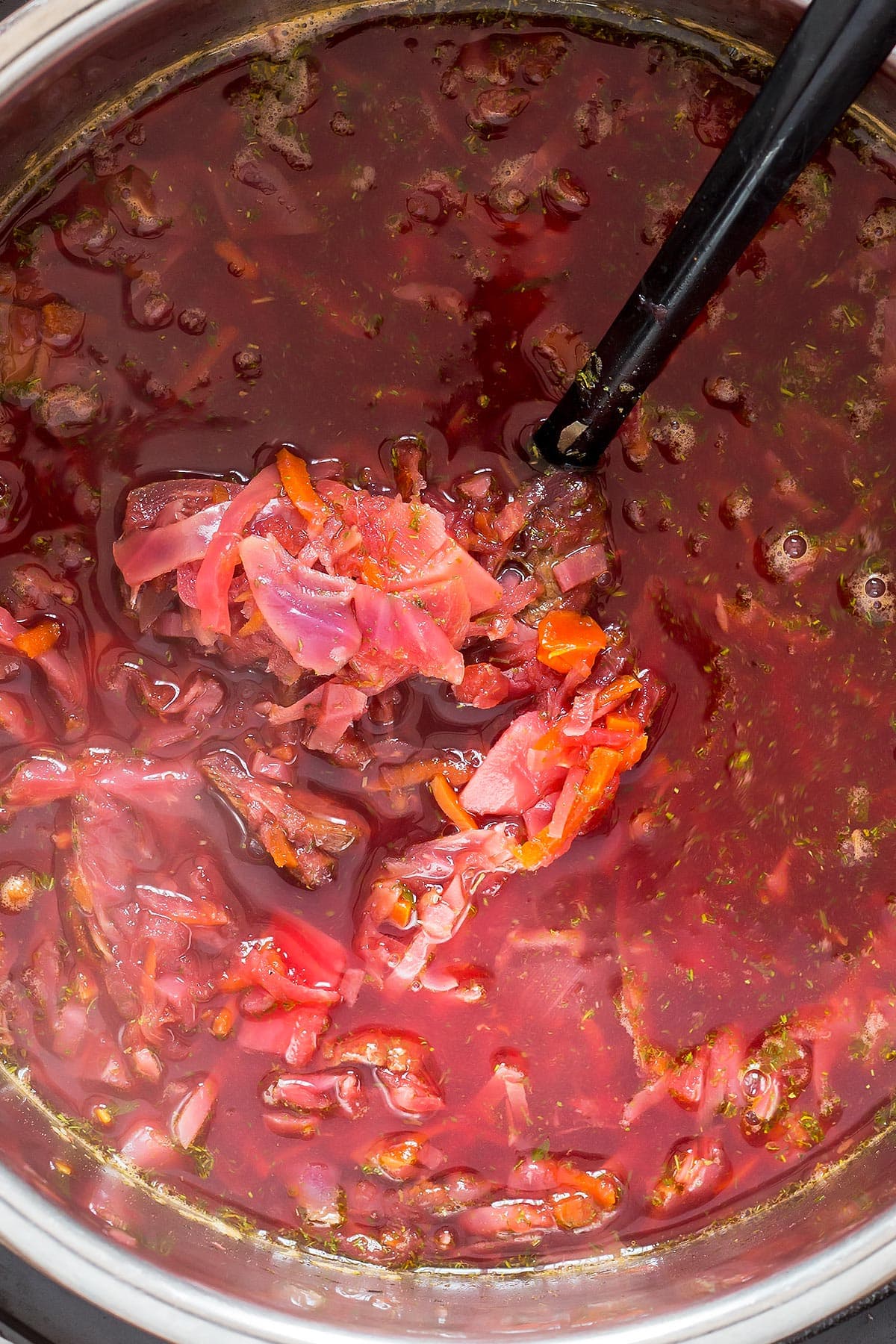 How to make Borscht meatless

For meatless vegan borscht, you can skip the whole first part of the recipe. Start with prepping all the veggies. Then add them to the pressure cooker.

When making meatless borscht I recommend replacing half of the water with broth (vegetable or beef stock) or adding bullion cubes/Better than bullion with the water for extra flavor. Otherwise cook as normal, adding the salt and bay leaves with the vegetables.

The main difference between stovetop and Instant Pot borscht is time. This mainly applies to the meat version.

Depending on the type of meat used, it can take anywhere from 1-3 hours of stovetop cooking time to create a flavourful broth and to soften the meat.

After that, the potatoes and cabbage are added. While the shredded carrot and beets are separately sautéed in a pan, before they are added to the borscht. 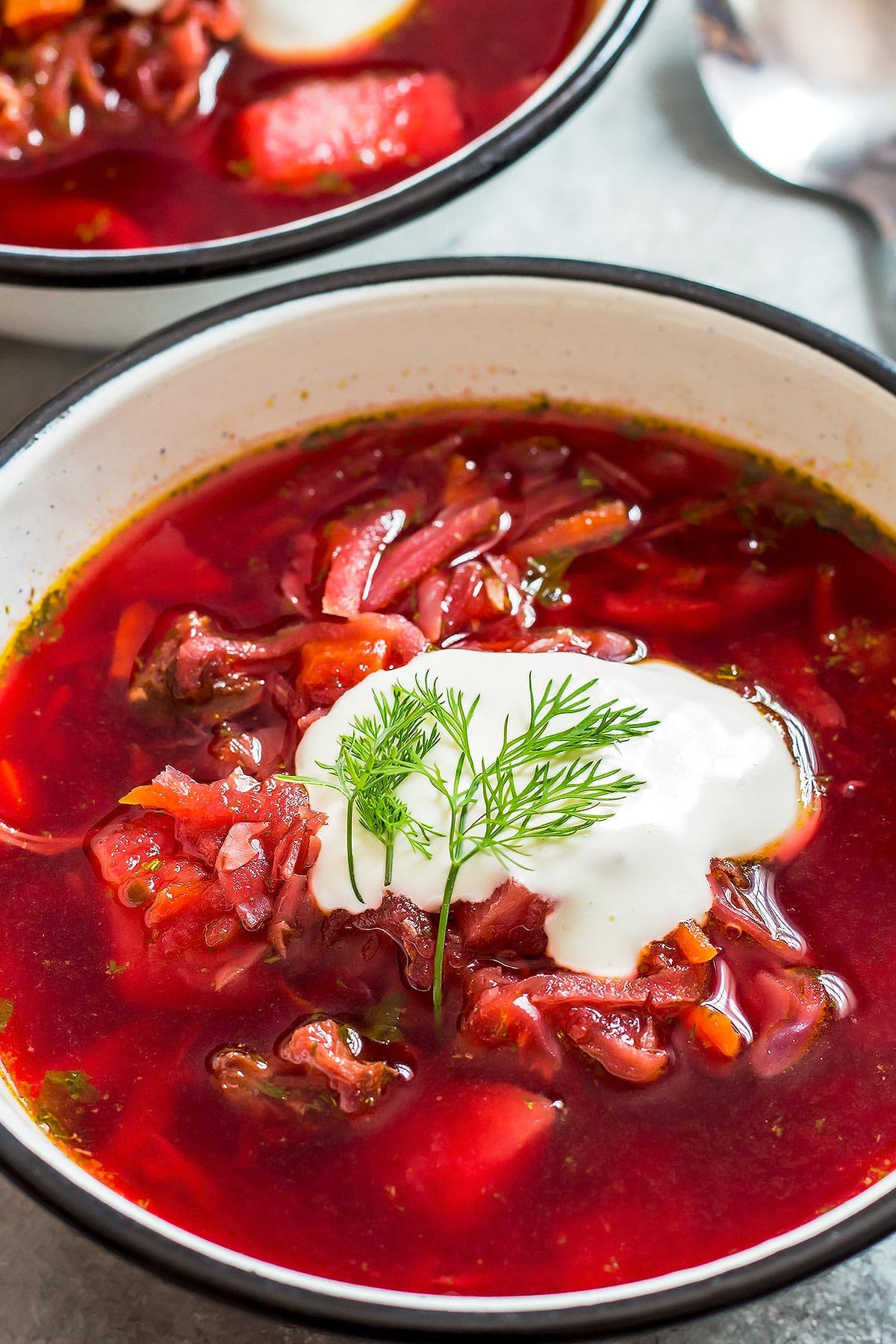 How is Borscht served?

Growing up we always added a dollop of sour cream to each serving of borscht. And I still love sour cream in borscht to this day as well as some fresh chopped dill.

In my husbands family (of beet-less borscht) they pour in a little heavy whipping cream instead of sour cream. Other families add a splash of vinegar or lemon juice for that touch of acidity and fresh minced garlic.

Many times borscht is served with a piece of crusty bread on the side. 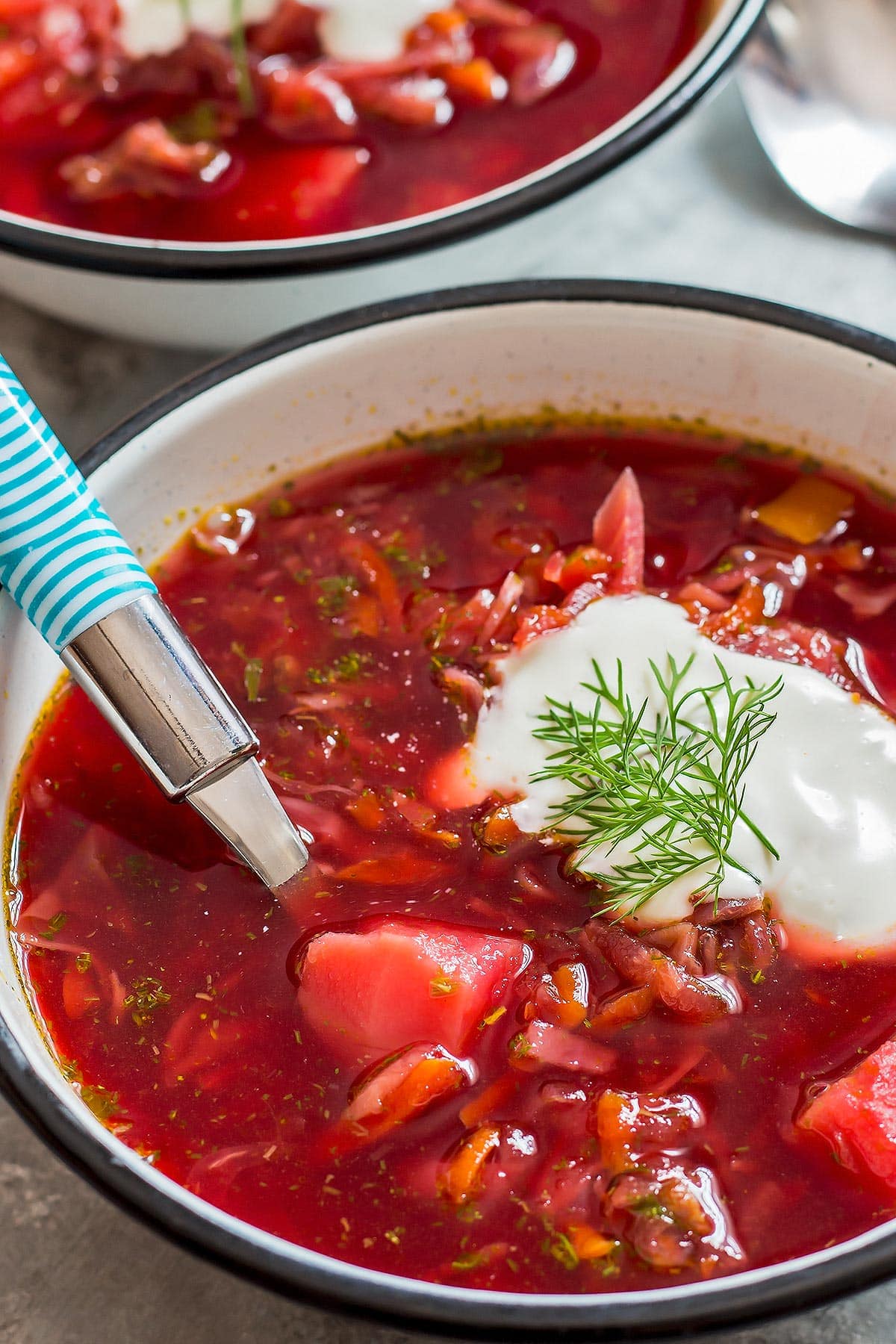 How long will Borscht Keep in the Fridge?

Borscht can be stored in the fridge for 4-5 days.

Can Borscht Soup Be Frozen?

Yes. Stored in freezer-safe containers borscht can be frozen for several months. The texture of the frozen and thawed potato pieces may be a little different, but this is usually masked well because of all the other ingredients in the soup.

Instant Pot DUO 7-in-1– Check it out on AMAZON 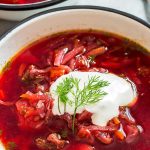 Instant Pot Borscht is a quicker and just as delicious version of the classic Ukrainian cabbage beet soup. This recipe is made with beef and includes a meatless vegan option.