You are here: Home » Bread

If you’re interested in making homemade bread leavened with sourdough, you will not go wrong with this rye sourdough starter. Here are step-by-step instructions to make a flavourful starter for the bread-making process. 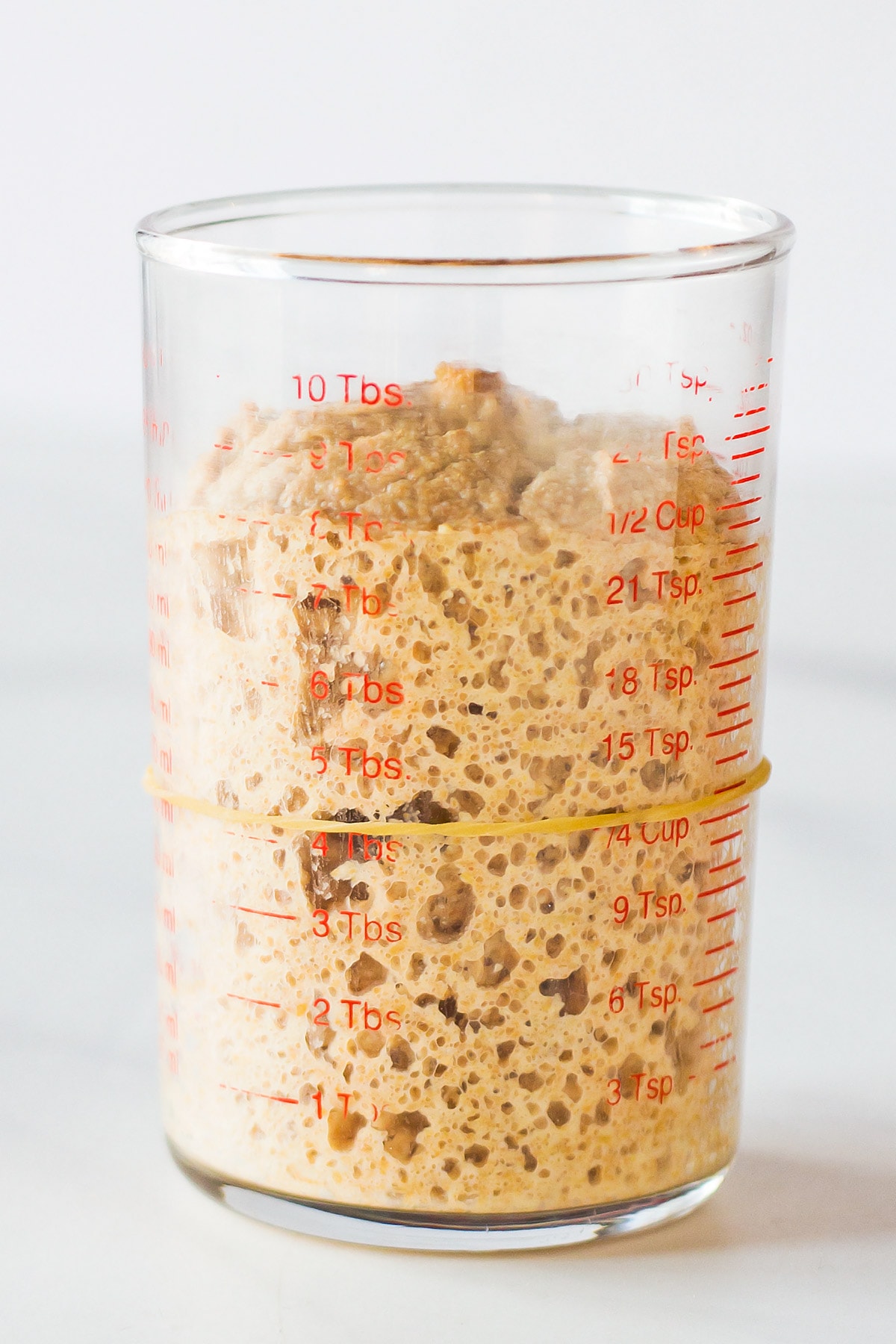 About this Rye Sourdough Starter

Last year not one, but two of my sourdough baking friends mentioned to me that they love their rye starter and have started using it exclusively. I couldn't write it off as coincidence and had to give it a try.

And sure enough, they've got me on their side now. I started a rye starter (I named her Harriet) and fell in love for four main reasons.

1. Becomes active very quickly. I believe there must be a lot of natural yeasts & bacteria present in rye grains. Unlike all-purpose flour starters that can take almost 2 weeks to become active, I started seeing activity in my rye starter after just 1 day!!

2. Forgiving. Even when forgetting the starter on the counter, or after taking a break and placing it in the fridge, it always comes back like nothing happened.

3. Easy to stir. Because of the lower gluten level in rye flour, the starter mix doesn't become overly sticky and gluey. It's easy to mix together and clean off from spoons, spatula and jars.

4. Delicious! And most importantly, of course, is the delicious flavor that rye starter gives my homemade loaves of sourdough bread.

Although you start this recipe with just rye flour and water, the mixture activated the natural yeasts present on rye grains and also garners yeast from your environment as it sits at room temperature. Then, it requires to be fed with additional flour and water until it is active enough to use to make bread. 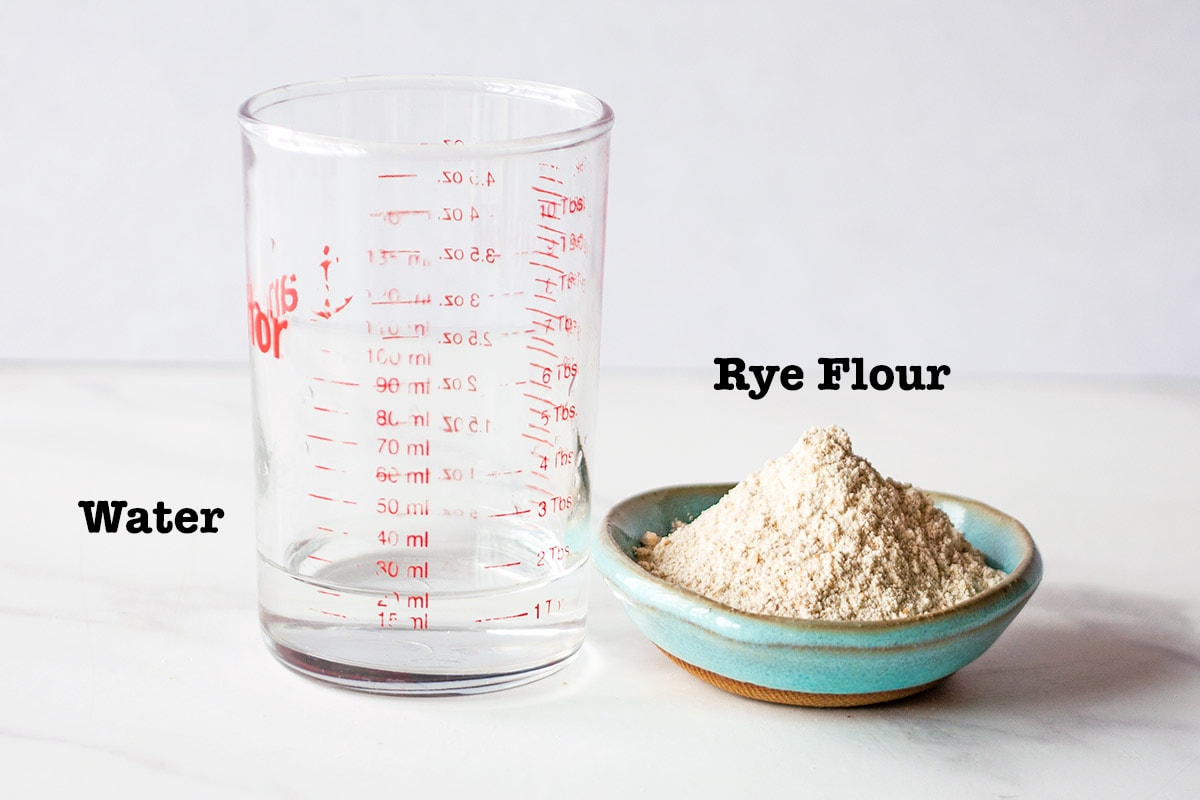 Similar to other sourdough starter recipes, this starter includes just two ingredients. These include rye flour and water.

Be sure to use whole-grain rye flour that include the bran. This is sometimes also called dark rye flour.

Filtered water is the best option for anything sourdough related. If you only have tap water, let it stand at room temperature in order to let any chlorine in it evaporate.

For tools you need a small vessel like a jar or cup to mix in and store your starter. I like to use a small glass jar as it is clear, allowing for visibility as the starter develops. It is also the perfect compact size to hold a small amount of starter. In the pictures I am using this 5-ounce measuring jar (Amazon affiliate link). In the video I used this 1-cup 3 spout jar. Both are from Anchor-Hocking.

You also need a loose fitting lid or cover to protect the starter from dust and fruit flies. A piece of cloth or paper towel secured with a rubber band.

I am using a second rubber band to mark the level of the starter to easier observe its rise. You could also draw a line on the outside of the glass with a marker. 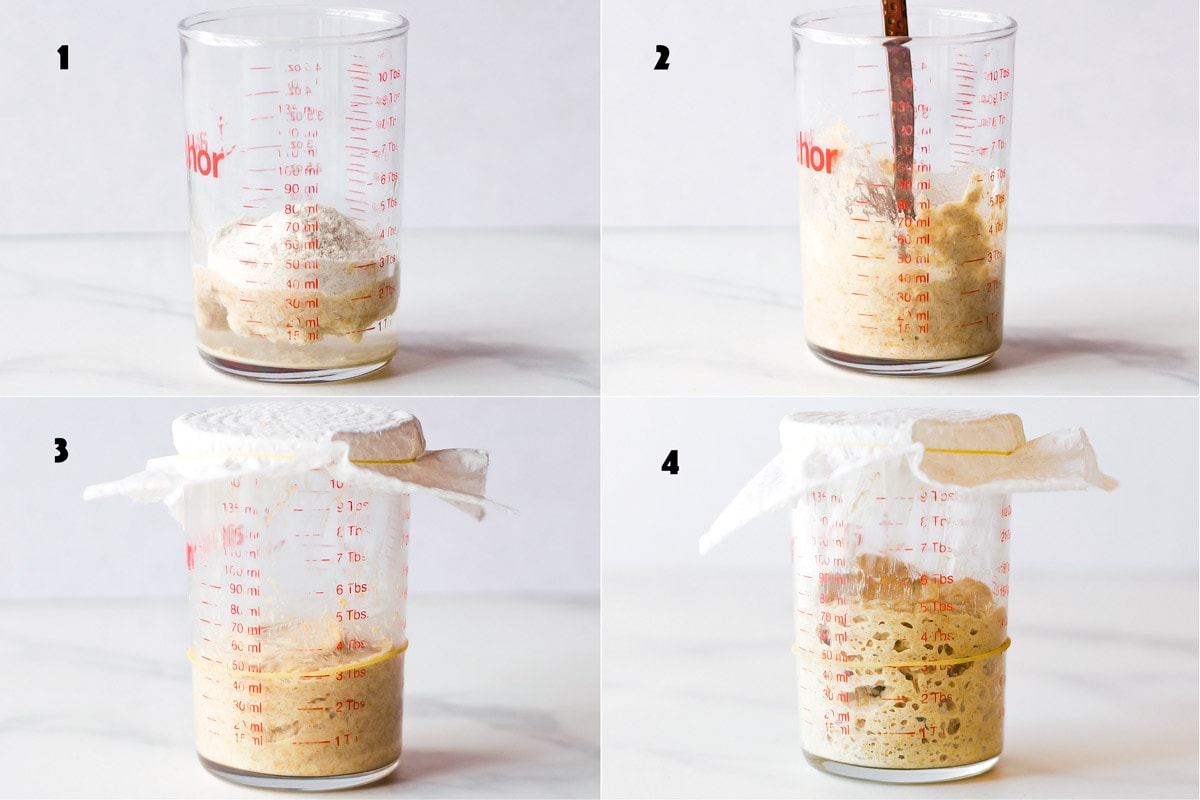 How to Make Rye Sourdough Starter

1. To begin making your rye sourdough start, add 10 grams (1 tablespoon) of rye flour with 10 grams (2 teaspoons) of filtered water to a container or jar.

2. Combine the rye flour and water until fully combined. Then try to scrape the sides and push everything down to the bottom to create an even layer.

3. Mark the starting level of the sourdough starter with a rubber band or draw a line on the glass with a marker. To protect the mixture from dust, fruit flies etc. cover it with a piece of paper towel fastened with the jar ring or an elastic band. Then, simply allow it to sit at room temperature for one day.

4. Within 24 hours you will notice some activity with the first bubbles forming and the starter slightly rising above the marked initial level.

The first feeding involves mixing another 10 grams rye flour and 10 grams of water into the starter. Cover the top and readjust the elastic band or draw a new marker line. 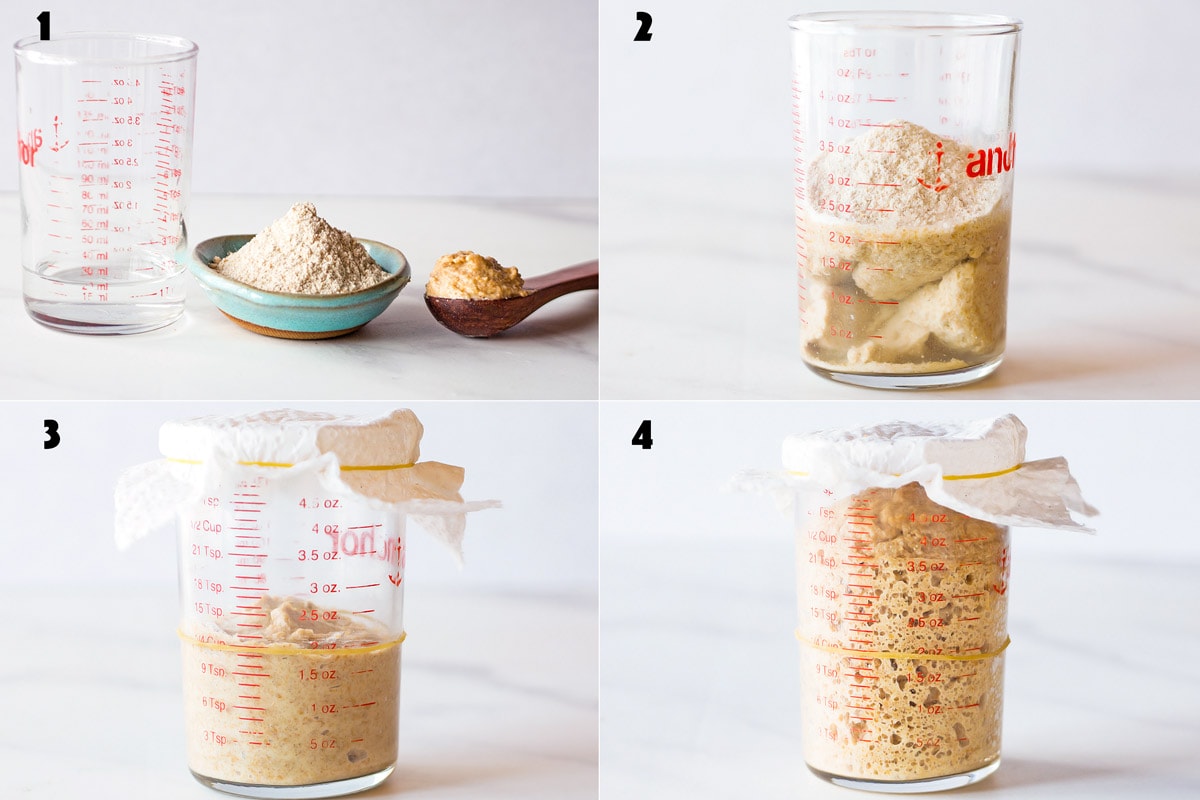 On day 3, your starter should have risen above the elastic band, but it is unlikely to have doubled in size. At this point, you can remove half of the starter. This is called the discard. Read more about it below.

1. You should be left with about 20g of starter mix. You are going to feed it with another 10 grams of each flour and water.

2. Combine the starter, flour, and water. Stir the mixture together until combined.

3. Cover the top and mark the starting level with an elastic or marker line.

4. The mixture will bubble up and rise.

Keep repeating the process from day 3 until you notice the starter doubles in size within in the first six hours after a feeding. Depending on your kitchen temperature and other factors this may take less than 7 days.

How to Know When Sourdough Starter is Ready 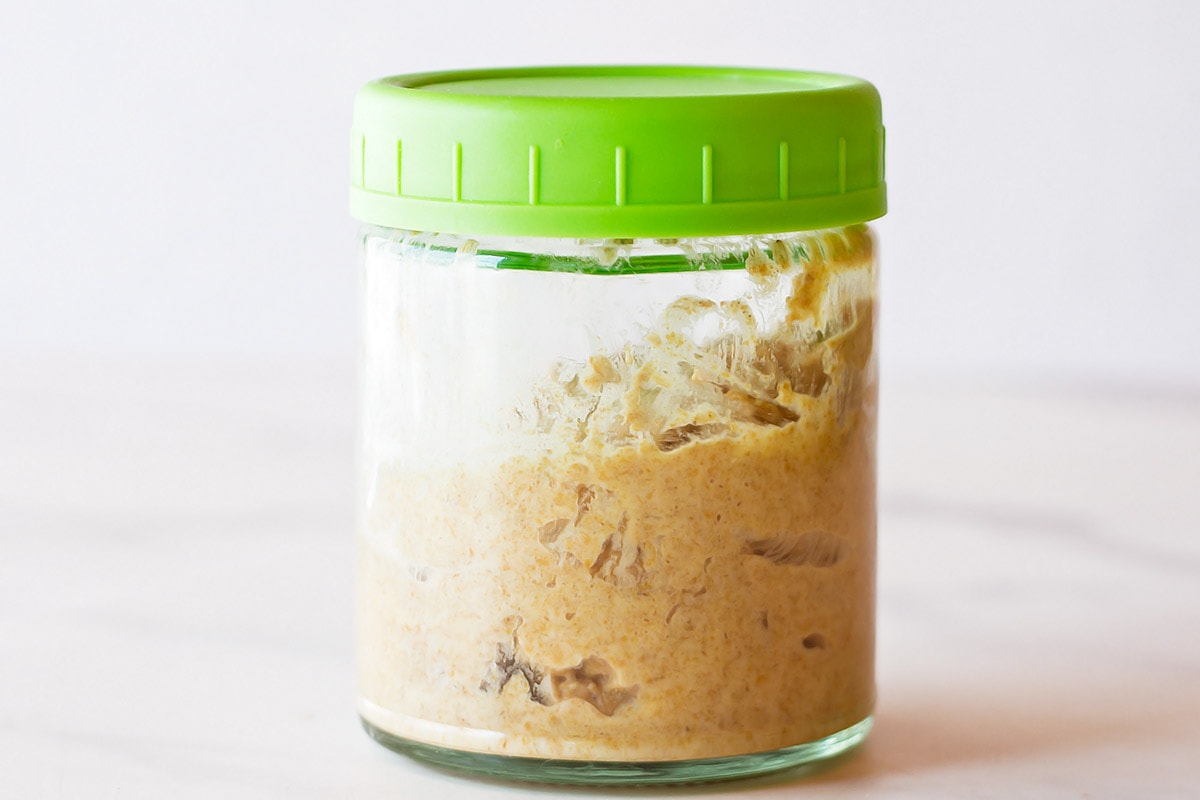 One of the reasons I like this rye starter so much, it takes very little maintenance. Once it has become active, I feed it only in anticipation of a sourdough bake. Which happens 1-2 times weekly right now.

If you plan to travel, or just want to take a break from sourdough baking, seal your starter with a lid and move it into the fridge. It has always come back fully active after just 1 or 2 feedings for me.

Once you are ready to start up again, simply let your starter come back to room temperature and then feed it per usual as outlines in Day 3.

I don't actually 'discard' - as in throw out - any of the sourdough discard. This is one of the reasons I keep a small starter and feed it very small amounts for non-baking days. I only increase the feeding amounts prior to baking.

Any discard gets added to my discard jar that I store in the fridge. Once enough has accumulated, I use it in my discard recipes (like this sandwich bread, biscuits, or pancakes), or in small amounts in any baking recipes that could use some sourdough flavor (pancakes, waffles, breads, etc.).

Since starter is equal amounts flour and water, I weigh the discard amount and deduct half of the amount from the liquid ingredient amount and the other half from the flour amount. Ex: I have 100g discard collected. That is 50g flour + 50g water. If I have a bread recipe that calls for 500g flour and 350g water, I deduct 50g from each and only use 450g flour + 300g water. 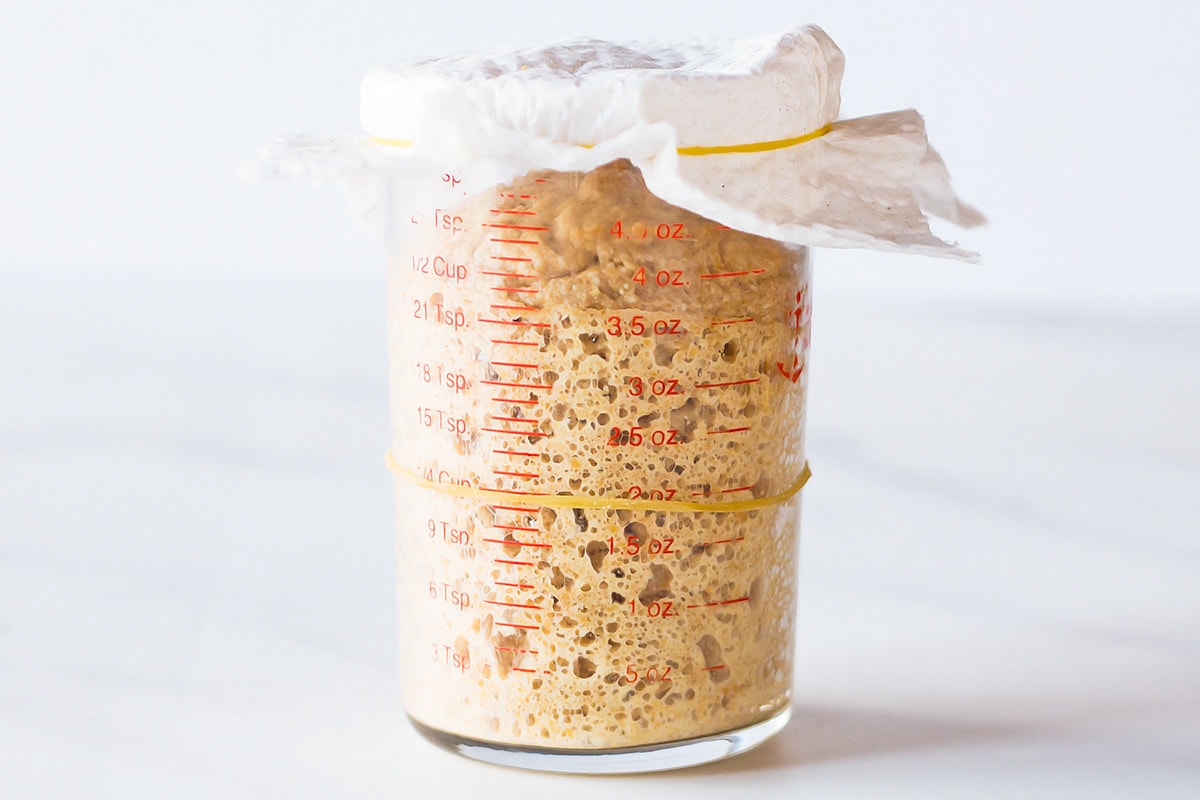 Why is Rye Good for Sourdough Starter?

There are many reasons why rye flour is a good choice for making a sourdough starter. For one thing, it attracts yeast more easily than traditional white flour, and as a result, it will ferment more quickly than sourdough starter with other types of flour. In fact, many bakers like to use a combination of rye flour and white flour in bread baking because they know that it will help them yield a more active starter.

However, a full rye starter is generally the best for achieving a loaf of bread that rises beautifully, with lovely pockets in the loaves, and a dark caramel colour on the outside.

Another benefit of using rye flour is that it has more nutrients than white flour. It is also a particularly flavourful flour, which can help yield tasty rye bread or even just a delicious undertone if you choose to use this starter in more traditional sourdough utilizing white flour. 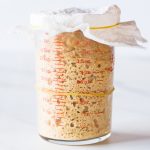 If you’re interested in making homemade bread, you will not go wrong with this rye sourdough starter. Here are step-by-step instructions to make a flavourful starter for the bread-making process.

* you can also create your own starter from other flours. I suggest using whole wheat flour in the first feeding (for the beneficial yeasts and bacteria on the whole grain bran), and then using unbleached white flour in subsequent feedings. The process is the exact same, but ay take a little longer than 4-7 days to get a fully active starter that doubles within 6 hours of feeding.