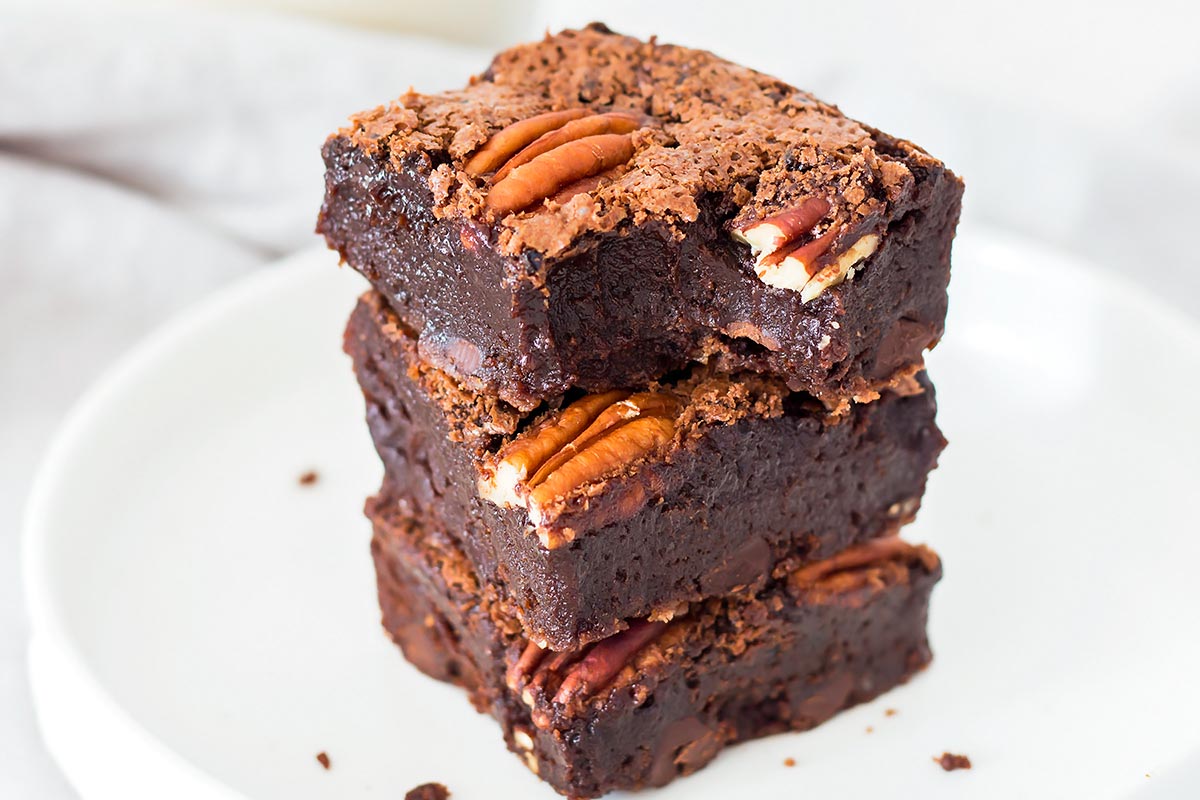 These are the best brownies because almost everyone should be able to enjoy them. This almond flour brownie recipe is gluten free and paleo, comprising of natural ingredients like almond flour, pecans, and coconut oil (instead of the usual butter).

Although some are allergic to nuts and may not be able to have these, almonds are generally a little more accessible than peanuts. They are incredibly rich in fiber, thus lowering the glycemic index of these brownies. Moreover, they have a generous amount of protein, vitamin E, manganese, and magnesium. If you only have almond meal, it can also be used as the flour component here.

The use of cocoa powder rather than sweetened chocolate in these almond flour brownies is another health benefit to this almond flour brownie recipe. Cocoa powder has some bitterness and a lot of depth similar to dark chocolate, which adds some complexity to these brownies. It is also quite generous in iron, which is excellent for those who need a little more of that in their diet. 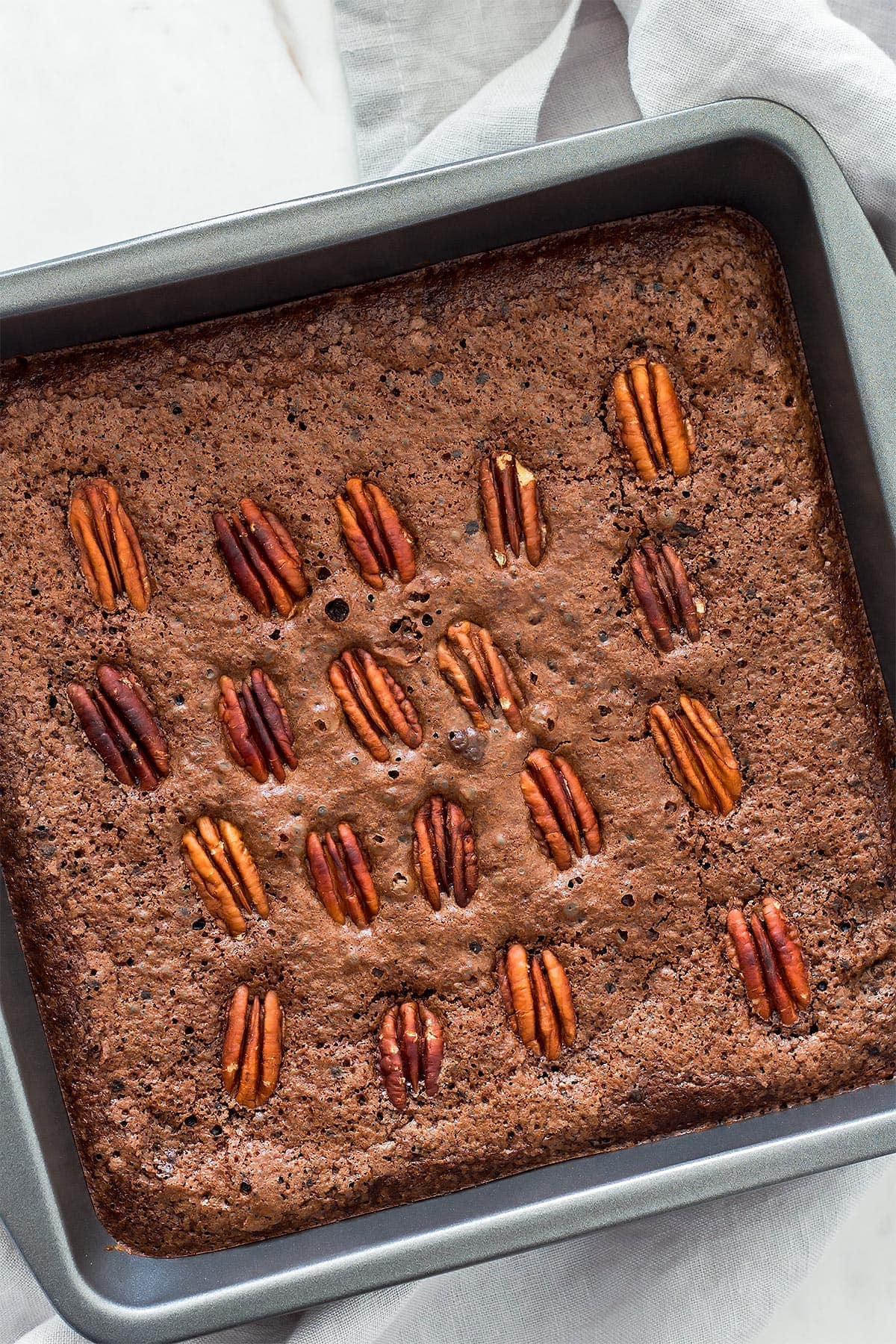 While anyone from omnivores to dairy free, gluten-free and paleo dieters can have these almond flour brownies, there is a way with simple substitutions to make them keto brownies as well. In this case, simply replace the muscovado/brown sugar with a granulated sugar-free sweetener instead.

Some options include erythritol, stevia, or monk fruit, which are all quite accessible at grocery stores and health food stores. Stevia can have a slightly bitter taste if used in abundance, though, so you might want to blend it with some erythritol or monk fruit to balance out the taste. Personally, I really like the Lakanto Monkfruit sweetener for baking. 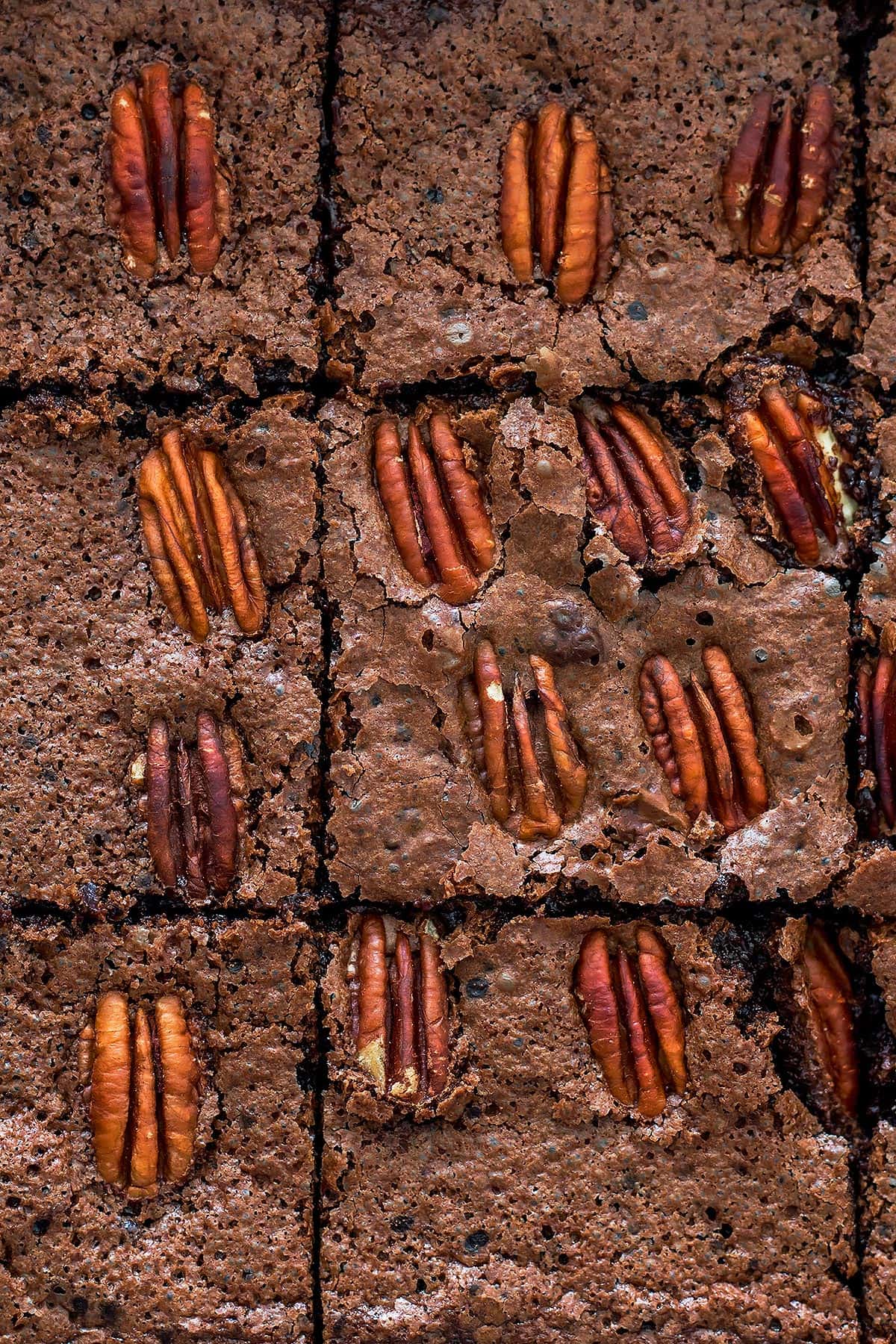 How to Toast Pecans

These gluten free brownies have the option of adding pecans, for their rich, buttery flavour and crunchy texture. If you love walnuts, however, feel free to sub those into this brownie recipe.

Whenever I make baked goods with nuts, I find it is best to toast them before using them. Toasting pecans, or any nut for that matter, intensifies their taste and gives them an attractive golden hue. The nuts also become even more textured, making baked items taste even better.

To toast the pecans, I recommend you place them in an even layer on a small baking sheet or pan. An even layer is essential for ensuring that the pecans toast evenly as well. Then, you will want to place them in the center of a 350° F oven (or use the preheating time to save time and energy).

You will know that they are done when your whole kitchen is filled with their tantalizing smell, and they are golden, but not burnt. This can happen fast, so to make sure you don't burn the nuts, it is always best to set a timer. The total time should take between 5 and 10 minutes. 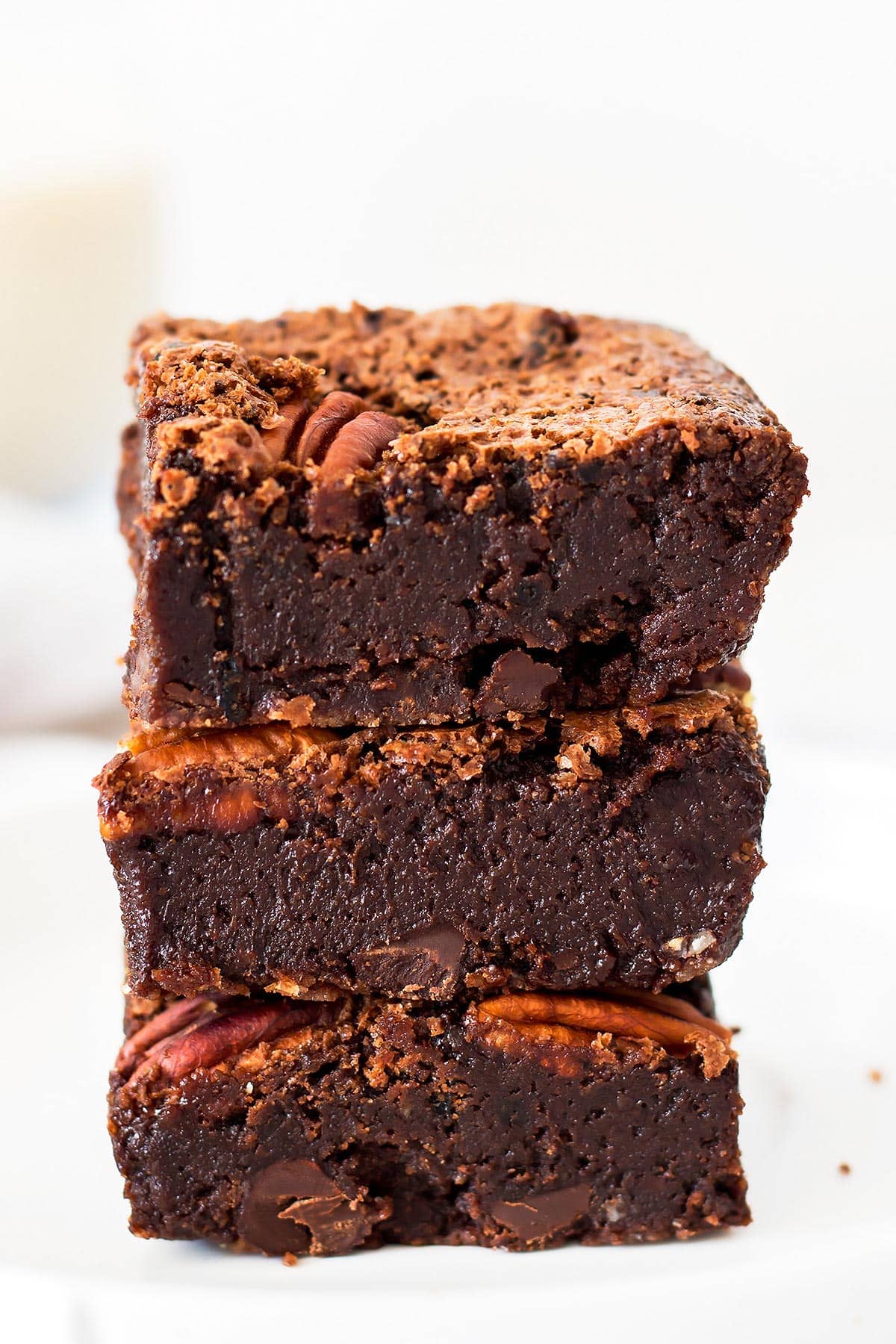 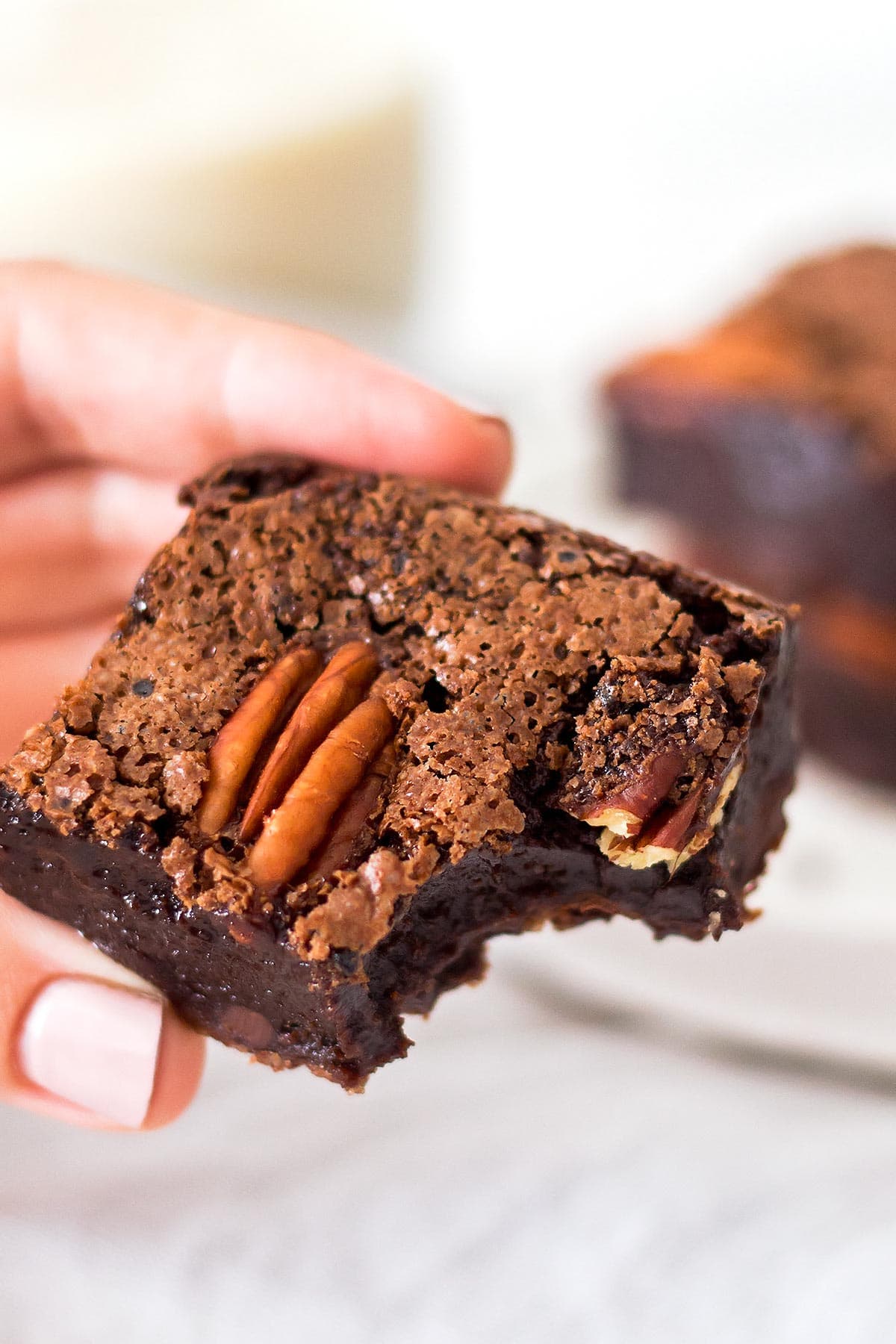 How to Tell When the Brownies are Done

Baking brownies can be a little tricky because you don't want them to overbake or else they won't have a fudgy texture and may turn out more like chocolate cake. These ones should only take 30 minutes, but ovens can be different. You can definitely set a timer for the total time of 30 minutes in the recipe, but I also recommend you go by sight to determine the brownie's doneness. They will look ready to pull from the oven when they are just set without any jiggliness in the middle. If they start cracking, then they have most likely overbaked, although this can be an overmixing issue as well.

You could test with a skewer, but it won't come out clean when done. So a dirty skewer is fine as long as it doesn't have raw batter clinging to it. However, it can also be misleading because it may pick up a melted chocolate chip. Keep in mind, too, that the brownies will continue to bake outside of the oven, even after the 30 minute baking time, so you definitely don't want to take these too long. 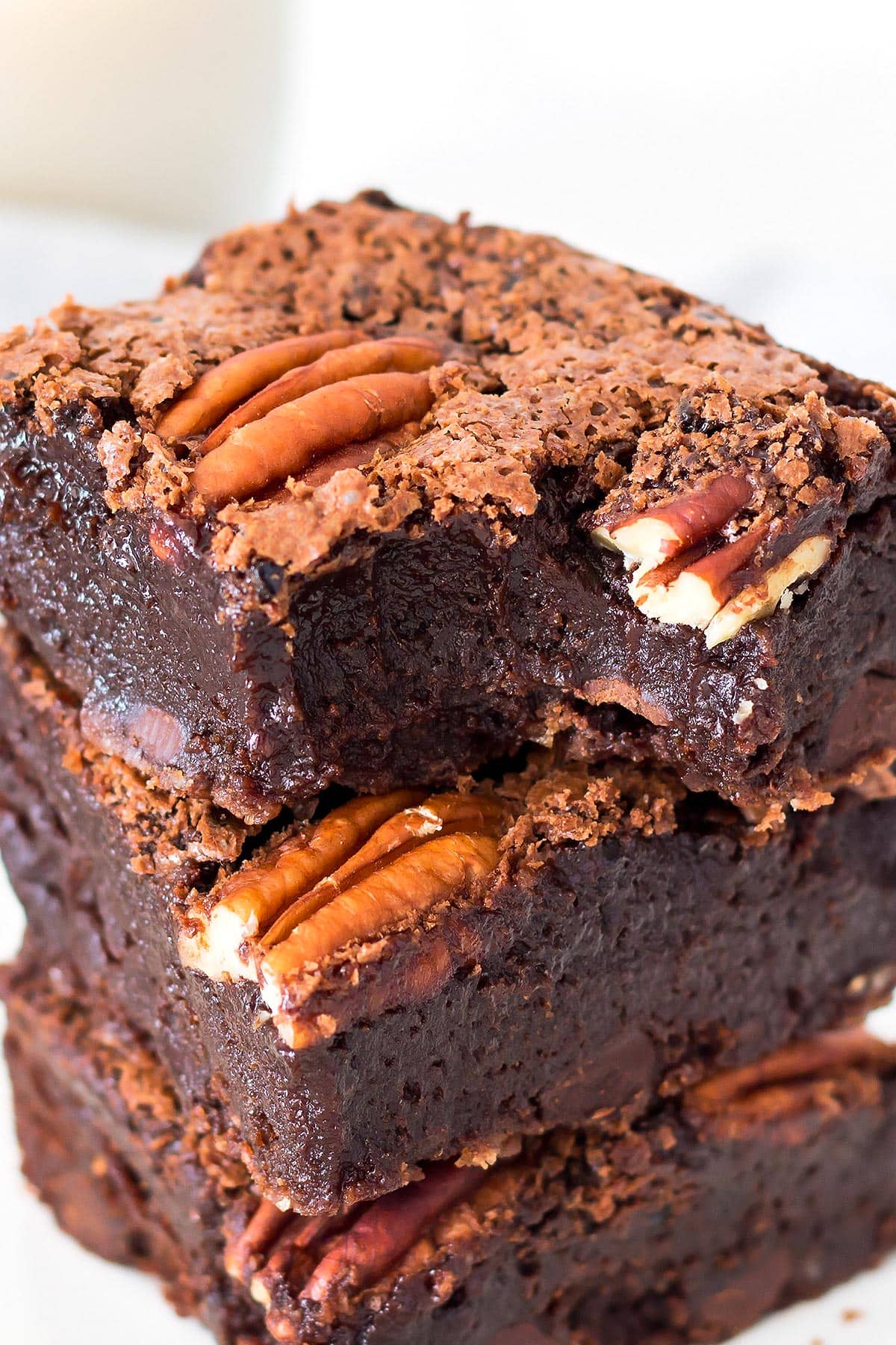 Some people like their brownies at room temperature, whereas some like them cold. While different temperatures add different levels of enjoyment to brownies, refrigeration helps to really enhance their fudgy texture.

Refrigerating these almond flour brownies also gives them a chance to set up so that they are easy to slice, coming out in clean, uniform pieces. For these reasons, I recommend that you refrigerate these brownies for a total time of 1 to 2 hours before slicing and enjoying. Once sliced, you can place them in an airtight container in the fridge to keep them fresh throughout the week.

How to Store Almond Flour and Nuts

Healthy baked recipes use plenty of nuts for their beneficial nutrients and healthy fats. If you are doing a lot of baking though, and especially over a holiday like Christmas, you may end up with more on hand than you can use at one time.

In this case, you can store the nuts or almond flour in the freezer until ready to use. These really shouldn't require any thawing at all, but their freshness will be preserved. If left outside for too long, they can go rancid. By freezing, you can elongate the life of your nut flours and nuts, and save yourself money. 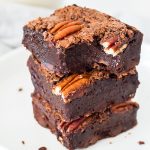 These almond flour brownies are fudgy, rich chocolate brownies using almond flour. With their combination of coconut oil, almond flour, and cocoa powder, they are a more nutrient-dense way of getting your chocolate fix any day of the week.

The net carb amount goes down to 2.5 grams per slice when using sugar-free sweetener + chocolate chips