Fudgy, rich and super chocolatey - this Keto Brownies recipe doesn't disappoint on any front. Yet they are low carb and keto friendly! 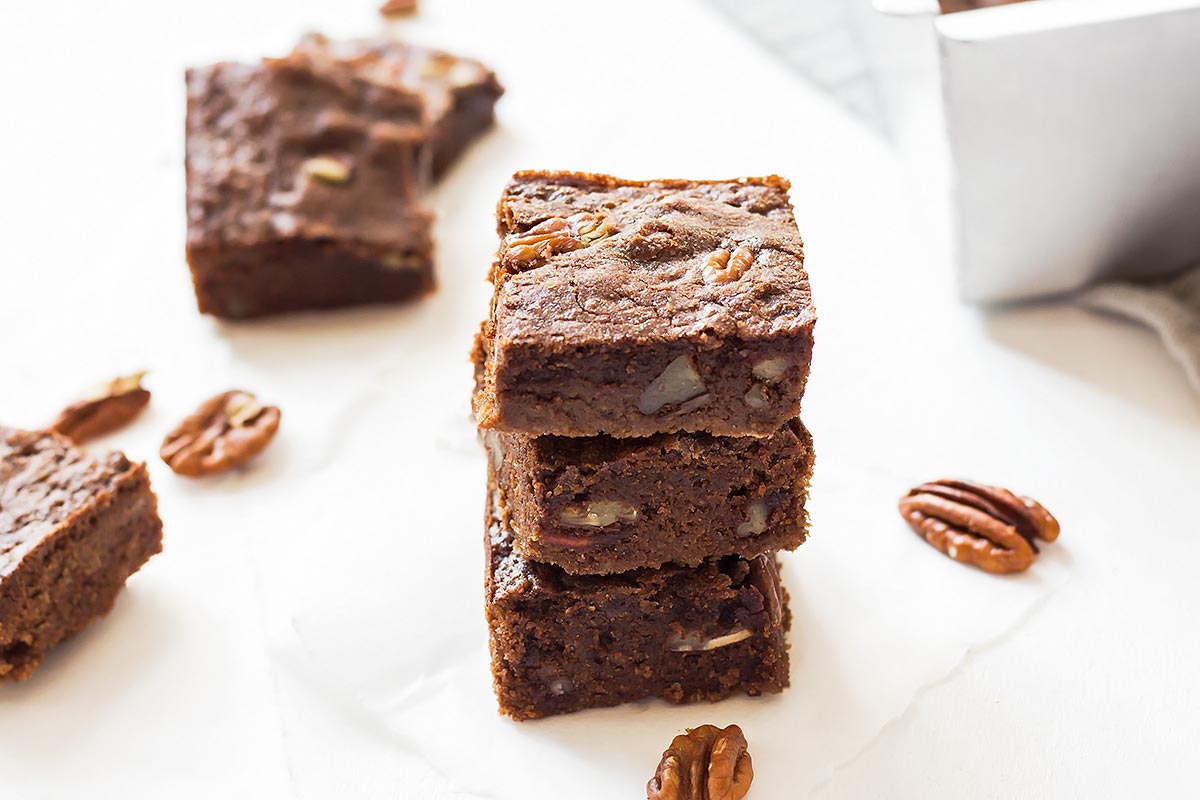 This is another awesome recipe developed by Carolyn from the blog All Day I Dream About Food. I already featured her Keto Biscuits from her last cookbook here.

Now she has written another cookbook - this time all about Easy Keto Desserts! Delicious, simple sweet treats that are also low carb.

It sounds almost too good to be true, but Carolyn knows how to make that kind of recipe magic happen. 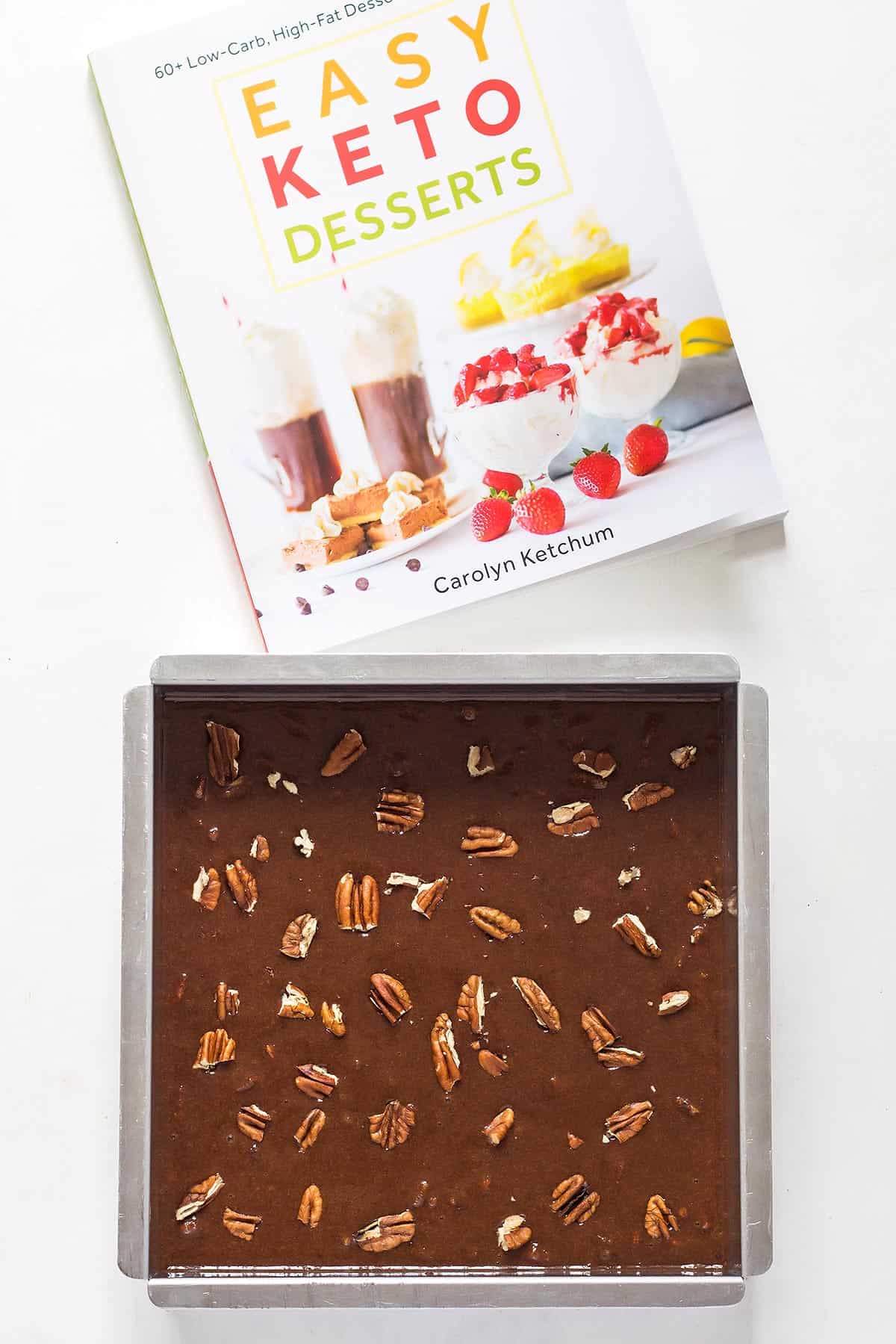 How to make keto brownies

Now let's talk about these amazing ketogenic brownies! They are not only delicious but also SUPER easy to make - true to the cookbook title (EASY Keto Desserts).

These are actually one-bowl brownies. This means that you can combine all ingredients in one big bowl to make the brownie batter.

Start by whisking together all the wet ingredients (oil, sweetener, eggs, vanilla). Then you add the dry ingredients (almond flour, cocoa powder, baking powder, salt) and stir until everything is combined. 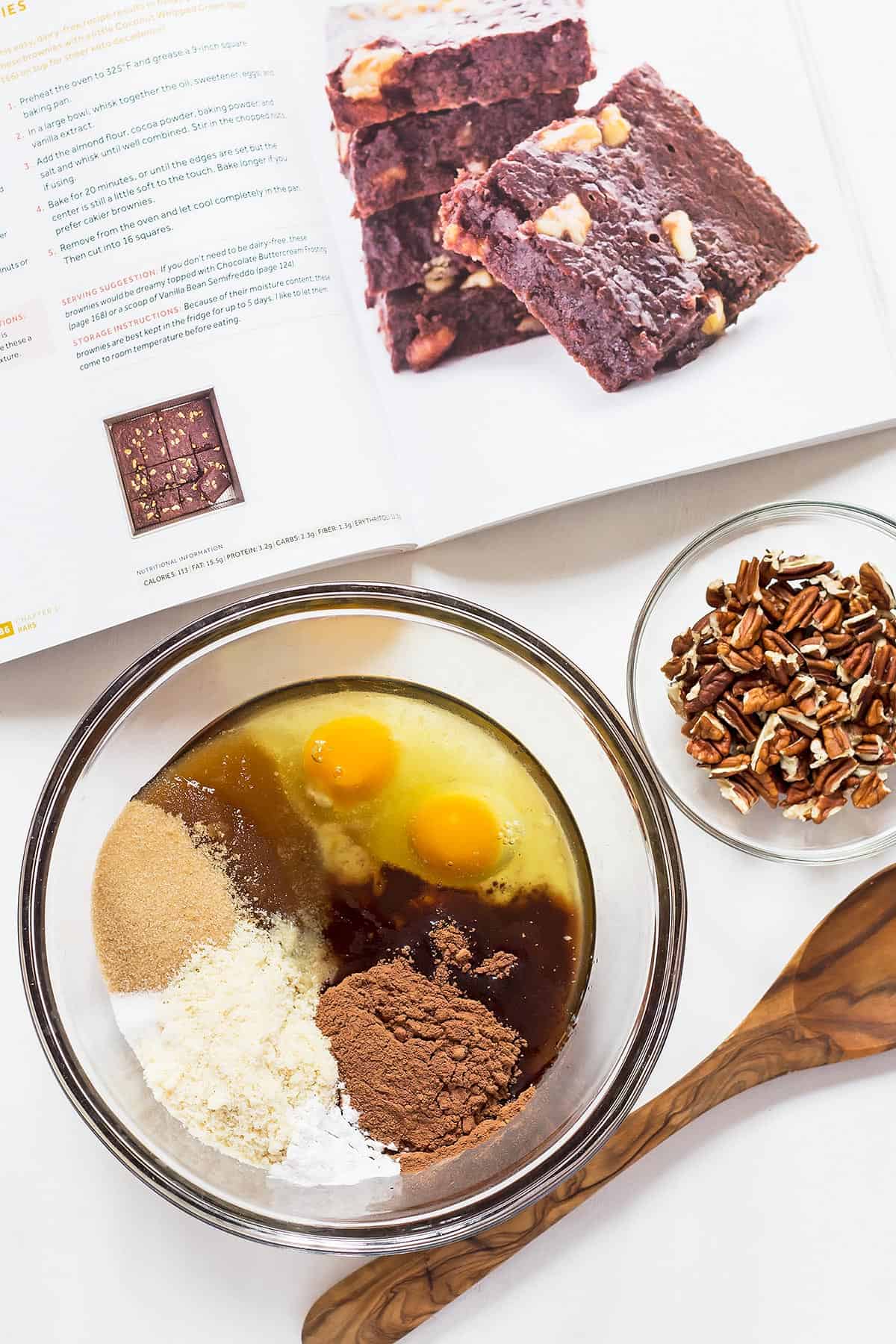 If you are like me and are a fan of texture and crunch, you'll love these brownies with nuts. Fold in some pecans or walnuts at the very end. If you don't like nuts, just leave those out.

Now fill the batter into an 8 or 9-inch square baking pan. In the original cookbook recipe Carolyn only recommends to grease the pan beforehand.

But I found the brownies were a little hard to remove from the pan cleanly, even after letting them cool fully. For that reason I recommend lining the pan with parchment before filling it with the brownie batter.

I added some more pecan nut on top at that point. These easy low carb brownies only need 20 minutes in the oven.

The edges should be set but the center will still be soft at that point. If cakier brownies are more your thing, you can also let them bake a little longer.

The hardest part is letting them cool fully in the pan before starting to slice and enjoy some.

How many carbs are in a brownie

I've included the full nutrition facts as stated in the cookbook in the recipe box below. But if you are eating low carb or are on the ketogenic diet you of course want to know how many carbs a slice of these low carb fudge brownies has!

You need to slice the batch into 16 pieces. Then each piece has 2.3 grams of carbs and 1.3 grams of fiber.

That means there is ONLY 1 gram of net carbs in each piece!!!

Now if those are fantastic news! If you are eating keto and only have 20 carbs for the day, fitting in dessert can be difficult.

But with this awesome recipe you'll only need to save up 1 carb to be able to enjoy a slice of rich and fudgy brownie.

I am only just starting to learn about sugar-free sweeteners. As a healthy/clean eating food blogger I usually try to stick to natural and less refined sweeteners like maple syrup, honey, coconut or demerara sugar.

But I know that even these natural sweeteners are out of the question when you are diabetic and trying to eat low carb or when you are on the keto diet.

Then recently another food blogger friend introduced me to monk fruit sweetener. You can find it either as liquid extract drops similar to stevia.

But to make it usable in baking recipes it is also available now as granulated sweetener. It is still based on erythritol (a sugar-alcohol) then, which is definitely so much better than any artificial sweetener. 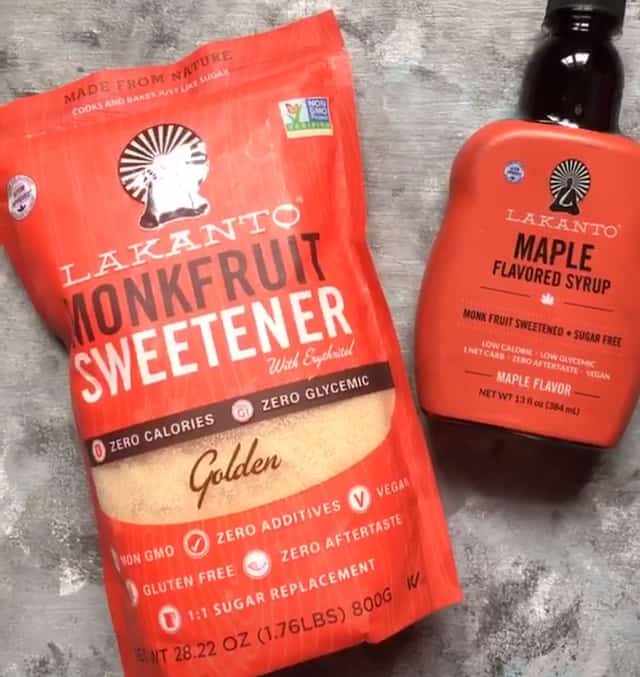 For these brownies a granulated sweetener is required, so I used Lakanto's golden monk fruit sweetener. Other times, when I want to replace a liquid sweetener like honey or maple syrup, I use their monk fruit syrup that is even maple flavored.

How to store keto brownies

Because these are rather moist brownies, they are best stored in the fridge for up to 5 days. If I keep them in the brownie pan I cover the pan with my bee's wraps. Otherwise you can also transfer the brownies to an airtight container to keep them from drying out in the fridge.

And as with any baked treat, they brownies will taste better once at room temperature. So take them out from a the fridge a few minutes before eating. 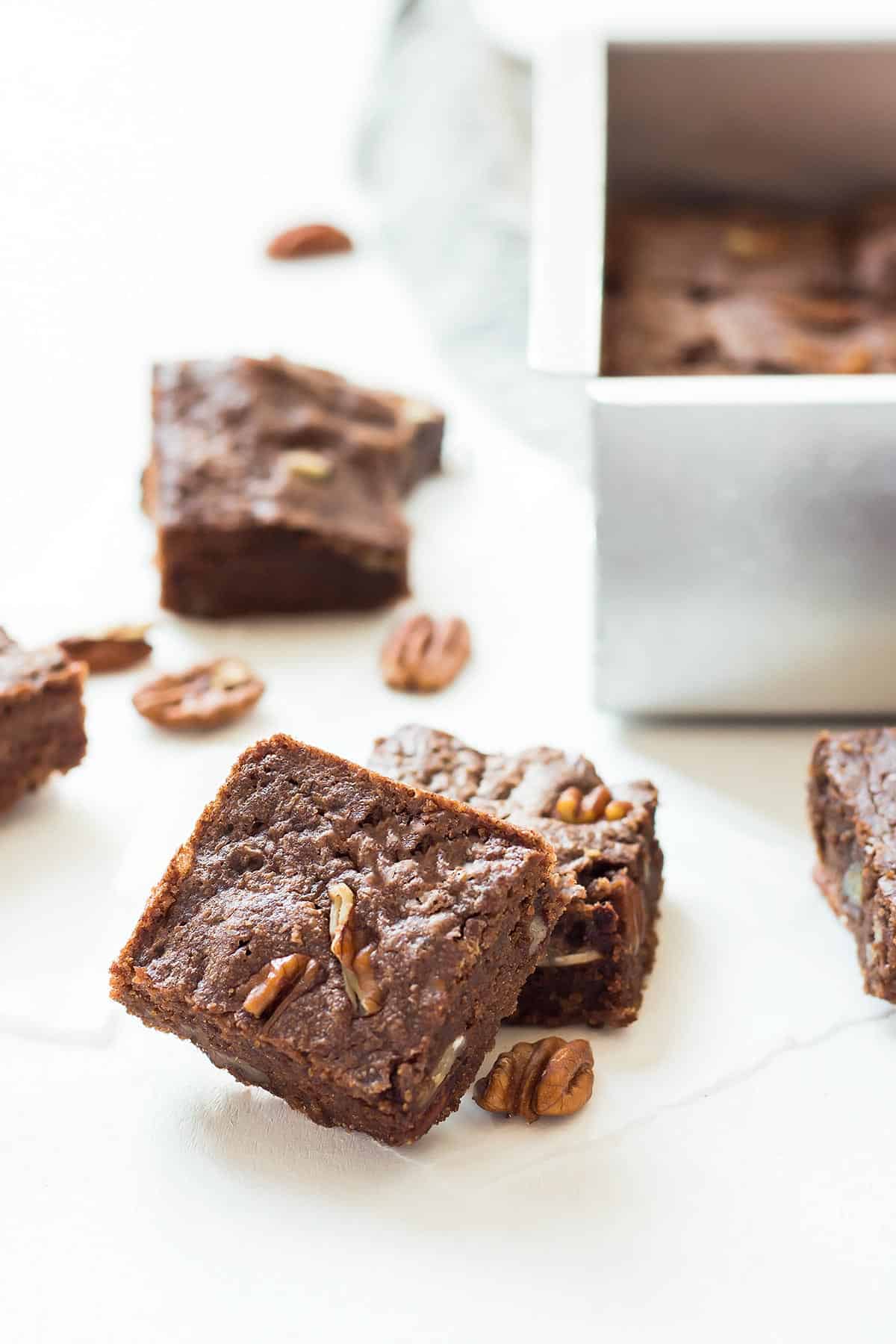 Easy Keto Desserts features a wide range of sweet recipe from cakes, cookies, and bars to candies, pies, and even frozen dessert. Check out the Index by clicking on the image of this Amazon listing to get an idea of the included recipes for yourself.

I love that Carolyn's books are more than just a recipe collection. They are actual educational guides to eating keto and low carb.

As with here previous cookbooks, her dessert books also includes an extensive section where she shares all her favorite dessert ingredients and even special equipment that might be needed. I still consider myself rather a keto novice, so I especially appreciate those chapters. 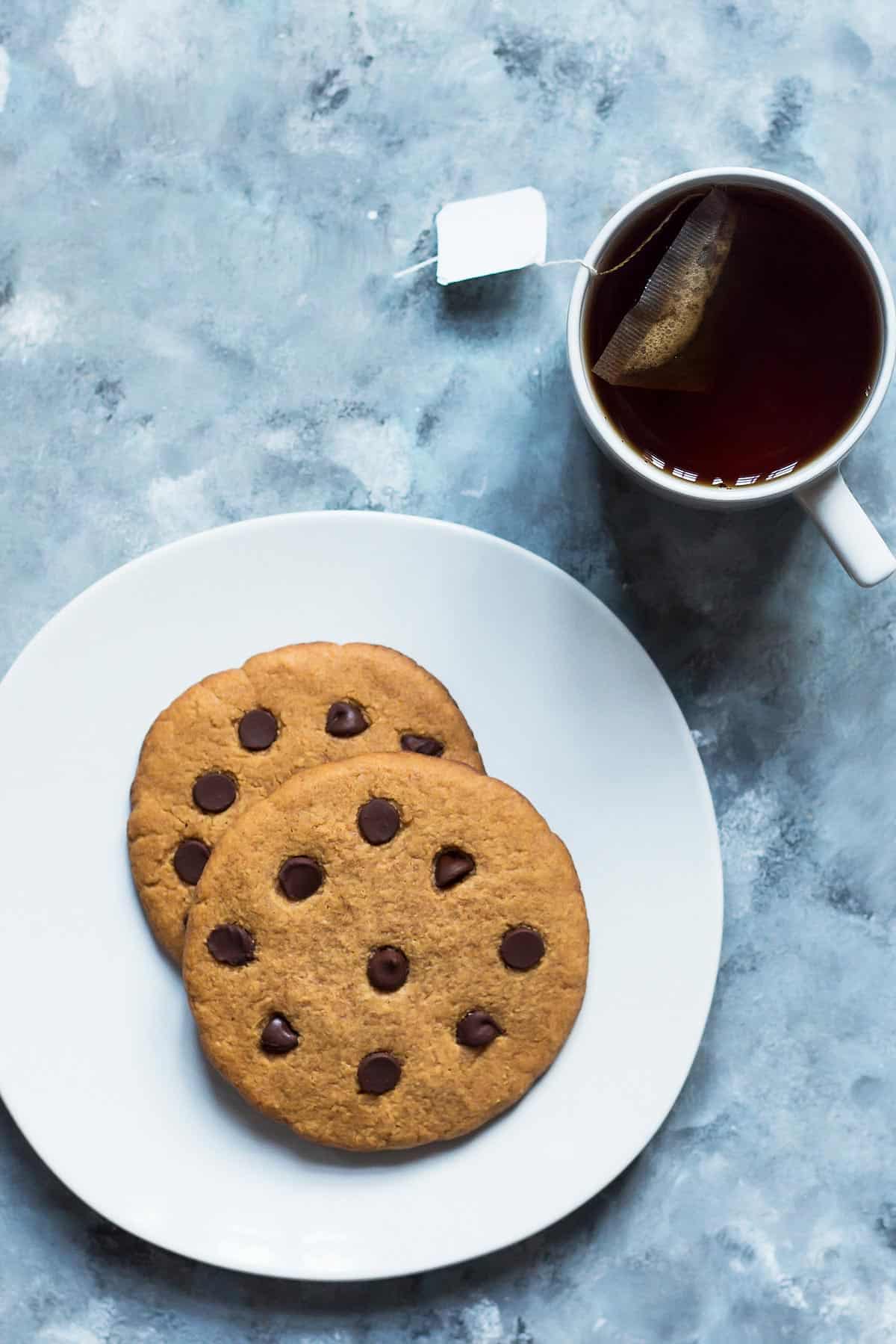 I have also made the Keto Peanut Butter Cookies from the book. They are made with coconut flour (you know how much I love that) and make only 2 per batch - perfect to ensure portion control.

If allergies are an additional concern for you, you'll love the quick reference guide where you can see at a glance which recipes are egg, dairy, or nut free. Plus you can see which ones are no-bake or can feed a crowd. 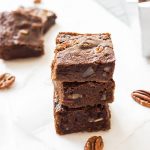 Fudgy, rich and super chocolatey – this Keto Brownies recipe doesn’t disappoint on any front. Yet they are low carb and keto friendly!

*granulated sweetener (as opposed to liquid syrup) is important for the right brownie texture. I used Lakanto monkfruit sweetener