These fudgy coconut flour brownies are gluten-free, clean eating, and can be a paleo or low-carb decadent dessert. These are so delicious that you won't be missing traditional brownies. 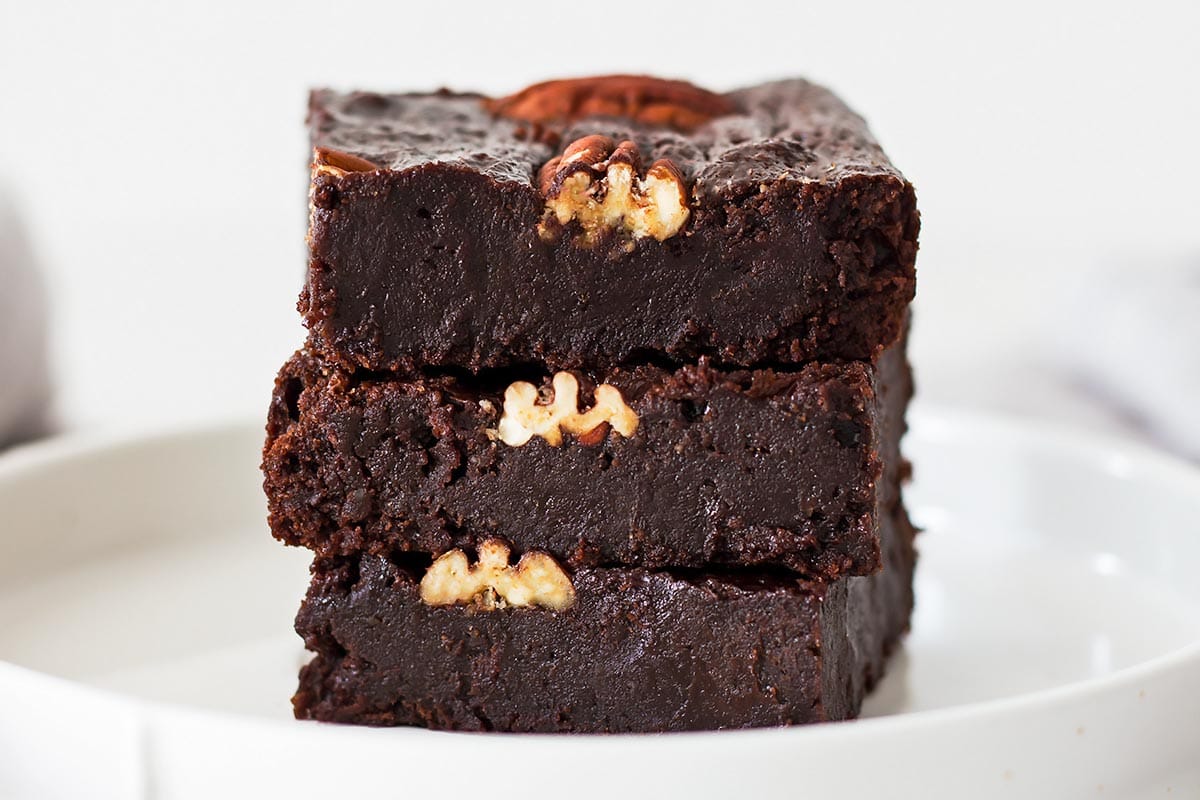 How to Make Brownies with Coconut Flour

These grain-free brownies are incredibly easy to prepare. In fact, if you are used to making regular brownies, the process for these is quite similar. This brownie recipe starts with lining a cake pan with parchment paper. This helps prevent sticking and makes it easier to remove the brownies from the pan after baking.

Next, you will have to melt your coconut oil and chocolate in a pot on the stove. To make this extra fast, you can finely chop the chocolate before adding it to the pot with the coconut oil. (You can also melt those 2 ingredients in short bursts in the microwave.) Then, you whisk in the sugar, eggs, vanilla, optional instant coffee, flour, and salt until you achieve a smooth batter.

The batter will be in a pourable consistency so you can simply pour it into the prepared baking pan. If desired, you can sprinkle the brownies with pecans before baking, but it won't be essential to make this coconut flour brownie recipe a success.

Since brownies made with coconut flour can be a little softer than traditional brownies, refrigerating them after baking and cooling to room temperature, is great to intensify their fudginess. This is a common trick for those who love a fudgy brownie versus a cakey one. It also helps the brownies set in such a way that you will get cleaner slices. You could definitely leave them out of the fridge if desired, but the brownies will be more cakey and less fudgy in texture. 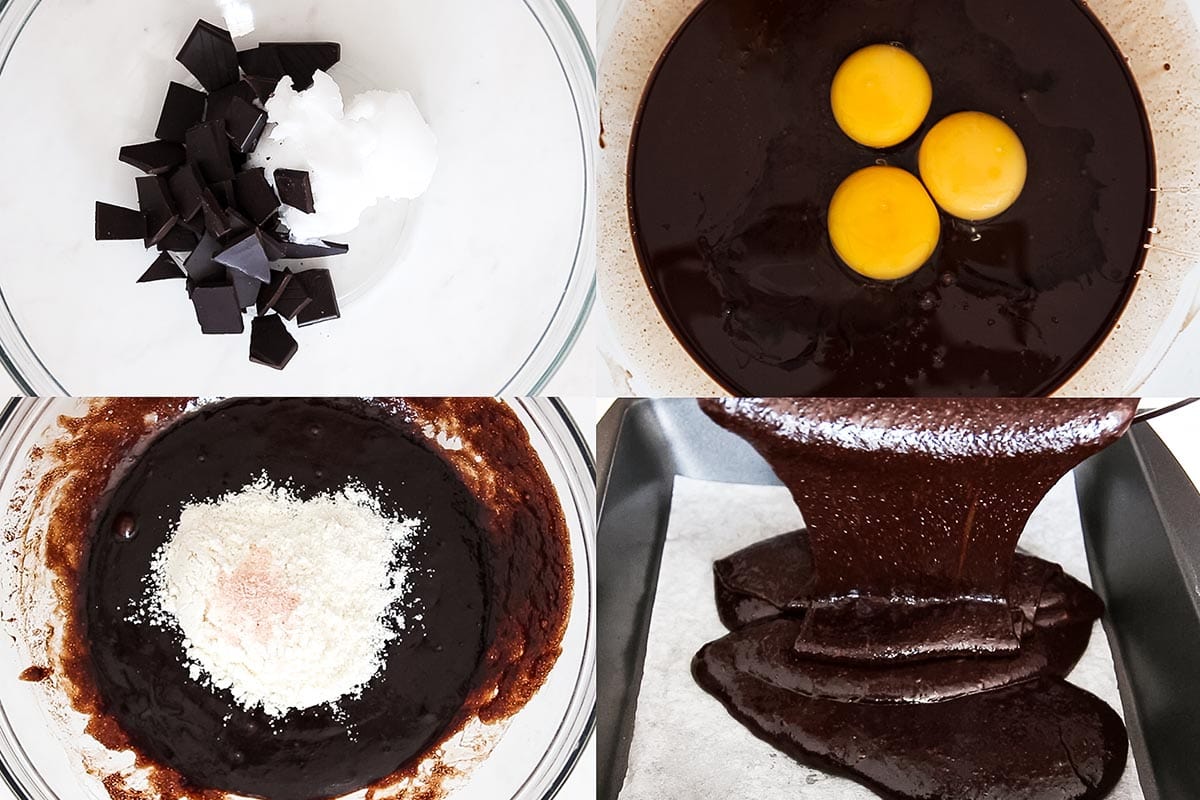 What Makes these Brownies Gluten-Free?

The majority of components in traditional brownie recipes are naturally gluten-free, except for the usual all-purpose flour. Rather than all-purpose flour, though, this version includes coconut flour. Coconut flour is a flour that comprises of dried coconut rather than wheat grains. As a result, it has a slightly sweet and coconut-like flavour that is delicious in baked goods.

Coconut flour doesn't contain any gluten, which results in a denser brownie than you would otherwise have with wheat flour. This is actually quite enjoyable in the case of brownies, though, because you don't generally expect brownies to be fluffy. A dense and fudgy brownie is ideal, so this flour works perfectly well here.

Coconut flour has a high absorbency rate, so a little goes a long way in home baking. In fact, this recipe uses only a little over a ⅓ cup which balances out the melted chocolate, coconut oil, and eggs perfectly. For a traditional brownie, around 1 cup of all-purpose flour would be suitable to replace a ⅓ cup of coconut flour. 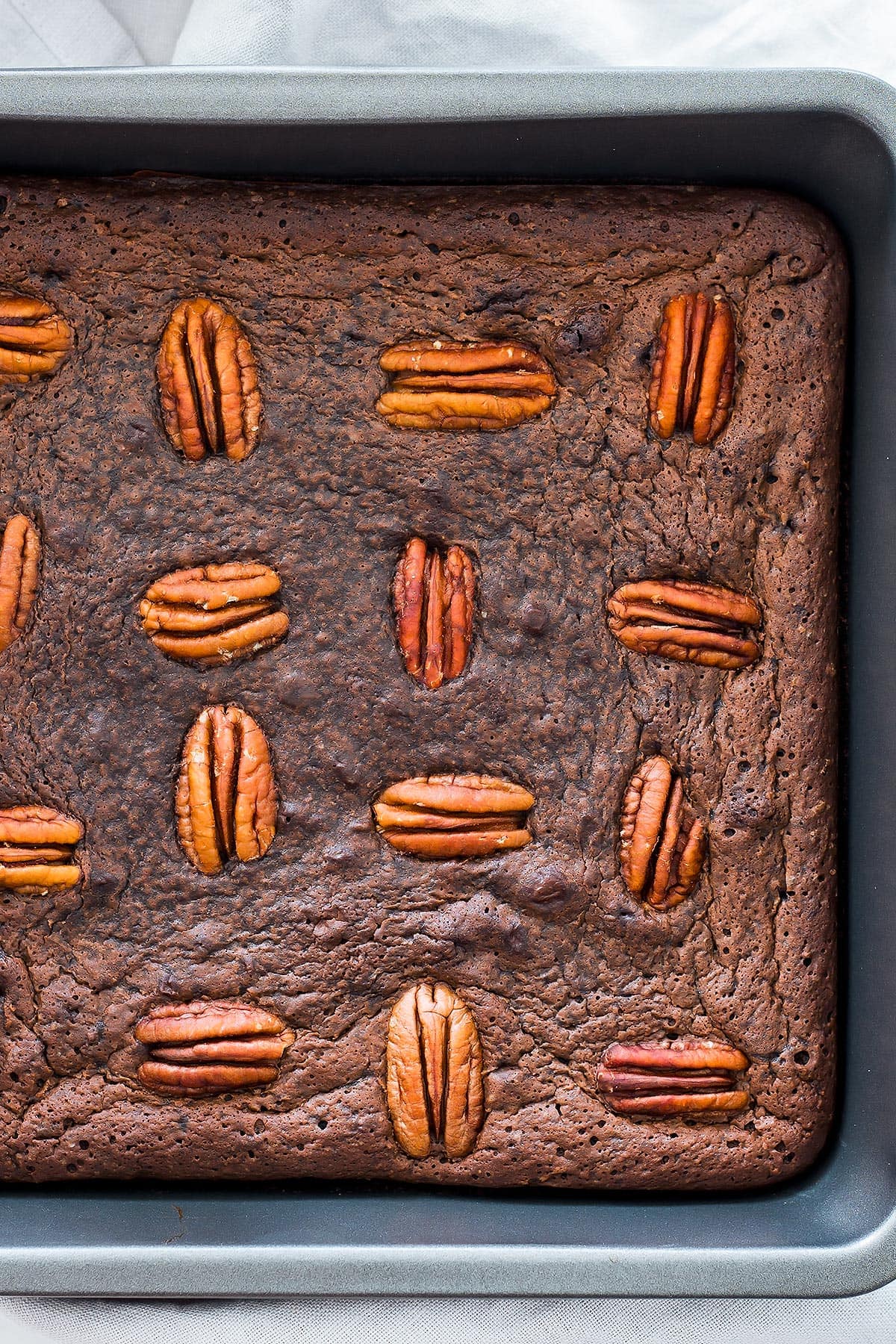 What Kind of Chocolate Do these Brownies Use?

While you may expect to come across a brownie with cocoa powder (like my almond flour brownies), these brownies don't include any at all. Instead, unsweetened chocolate (either in bar form or chocolate chips) gives them an incredible depth of flavour, decadence, and richness that will satisfy a chocolate craving like no other. Using chocolate also ensures that these brownies are moist and fudgy, even with the use of coconut flour, which is very absorbent and can easily result in dry baked goods. Often, cocoa powder is a flour component in brownies, but it isn't necessary here.

Of course, you could substitute with your favorite dark chocolate bar. Anything with 70% chocolate or higher will be great in these brownies. Less dark or semi-sweet chocolate would result in quite sweet brownies. In that case, I recommend decreasing the sugar/sweetener amount. Even chocolate chips would work, especially if you have plenty of them leftover from holiday baking. 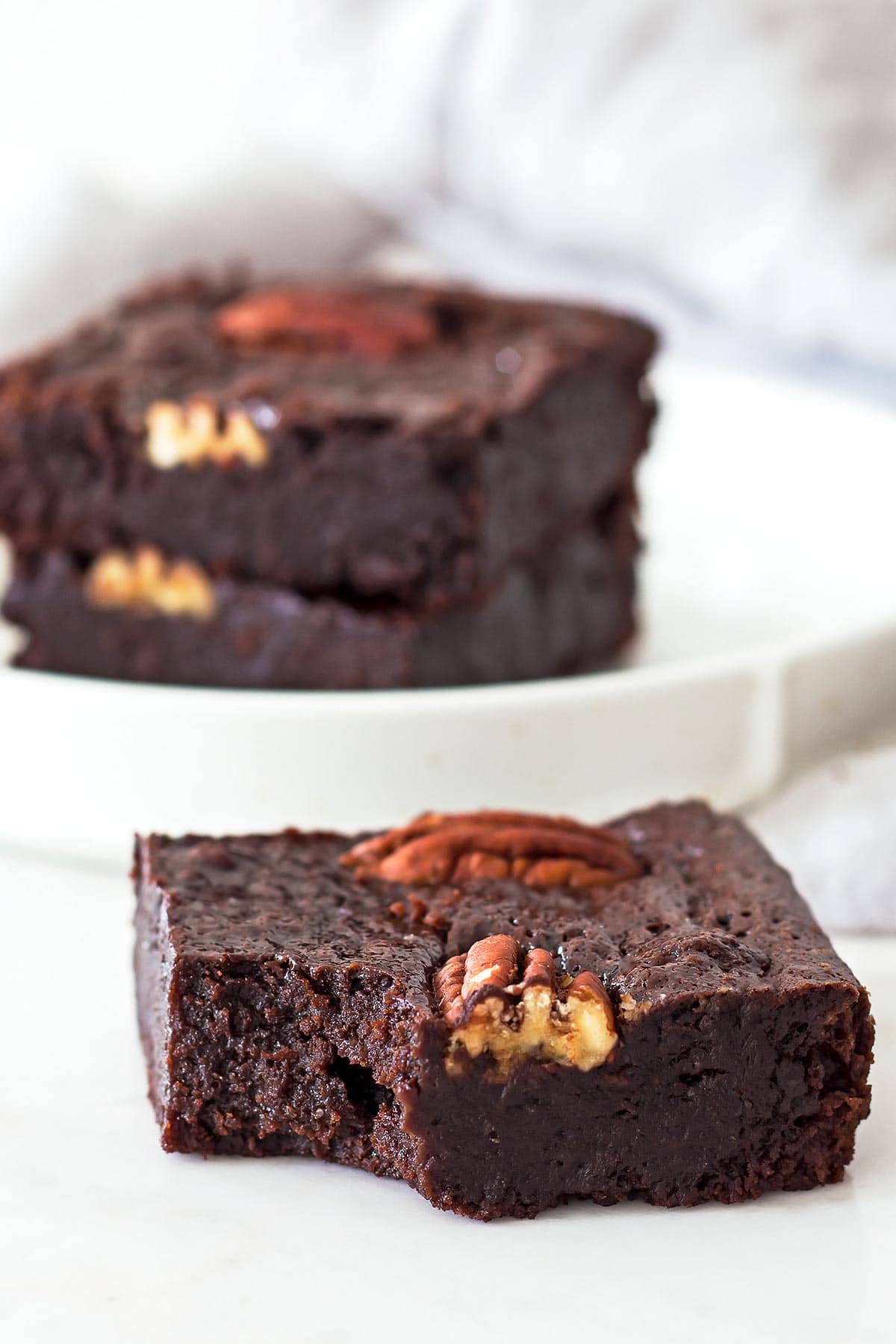 Can I Replace the Pecans with Another Nut?

The pecans are an optional garnish for these brownies. They add some gorgeous colour and textural contrast, though. Imagine studs of pecans all over the top of these delicious coconut brownies! Pecans are rich and buttery, which makes them great on baked desserts. Their full flavor is revealed by toasting in the oven.

If you don't like pecans or nuts in general in your brownies, you don't have to add them. Nut-free brownies will taste just as delicious. However, if you would like a pretty garnish, but simply don't have pecans halves on hand, you could substitute with walnuts or even almonds. A sprinkling of chocolate chips or flaky sea salt will also make an attractive garnish on top.

How Do you Tell When Brownies are Done?

Brownies can be a challenge to bake. If they are baked too little, they may be gooey and difficult to slice. If they are overdone, they could be dry and mealy in texture. Brownies are the best somewhere in between.

To tell whether your brownies are done, they should have a set texture without any movement in the center. Additionally, the top will no longer be glossy in appearance. If they are baked too long, they may start to crack on top. As a result, cracking is a good sign to know that you should pull them out quickly.

Testing with an inserted skewer isn't usually the best way to test brownies' doneness. This is because it may pick up the gooeyness of the chocolate and leave you with a false impression that it needs longer in the oven. The bonus of this coconut flour recipe is that if it is slightly underdone, it will set into perfectly fudgy brownies in the refrigerator during chilling. 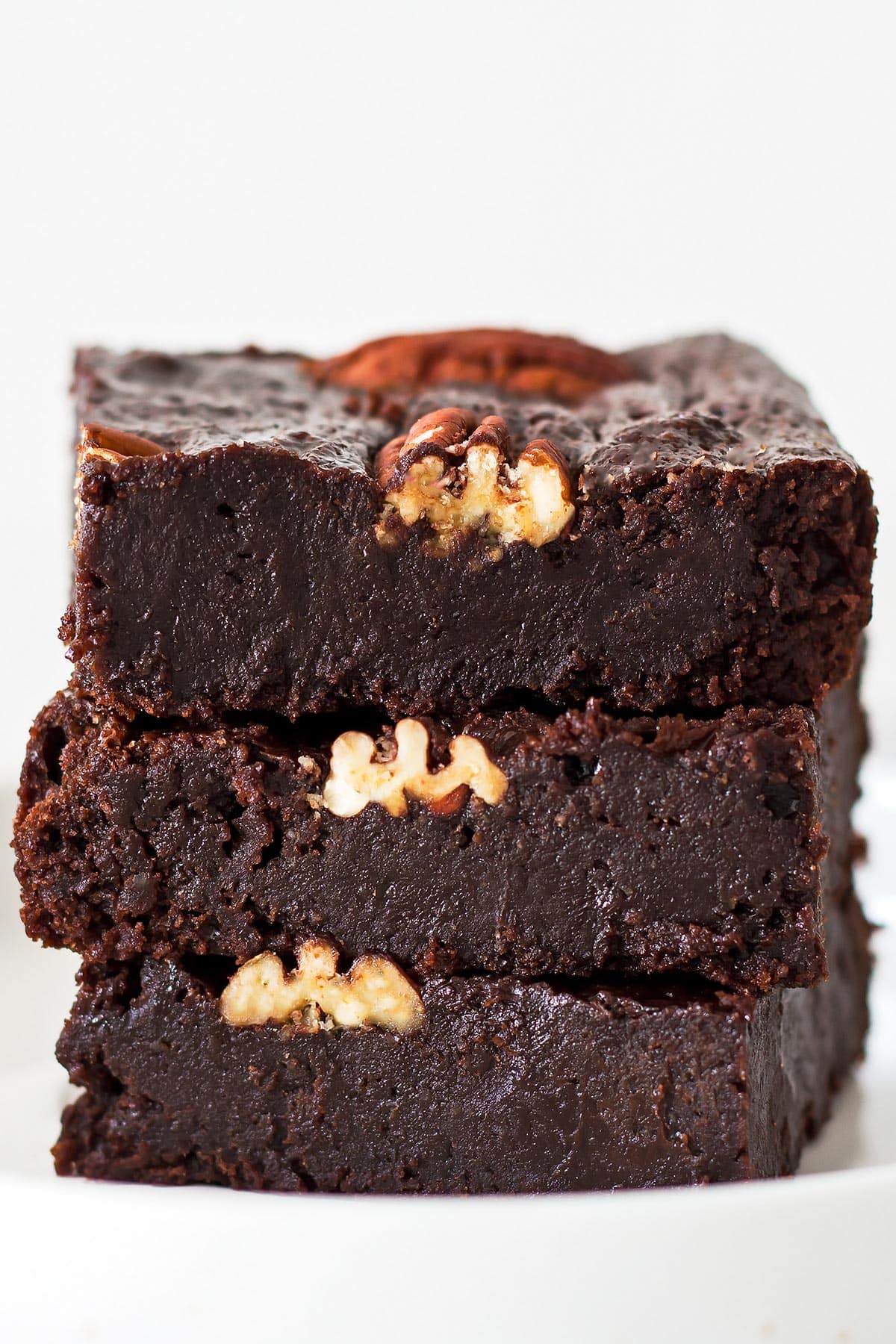 Coconut flour has quite a bit of fat in it which will cause it to go rancid if stored in the open too long. If you bake with it often, you can simply store it in your pantry. It traditionally comes in smaller bags so you should be able to use it quickly before it goes bad.

On the other hand, if you are someone who bakes with coconut flour only once in a while, you may want another storage option. Putting it in the freezer is a great choice to increase its longevity. It won't need very much time to thaw, either, so you can just pull it out when you need it. This will keep it fresh until you are ready to use it again. The freezer is a great place to keep all of your whole wheat flours, nut flours, and whole nuts as well. 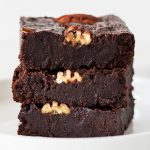 These brownies are a gluten-free combination of coconut flour, sugar, eggs, vanilla, and pecans for a soft, chewy, and decadent dessert. These are so delicious that you won't be missing traditional brownies.