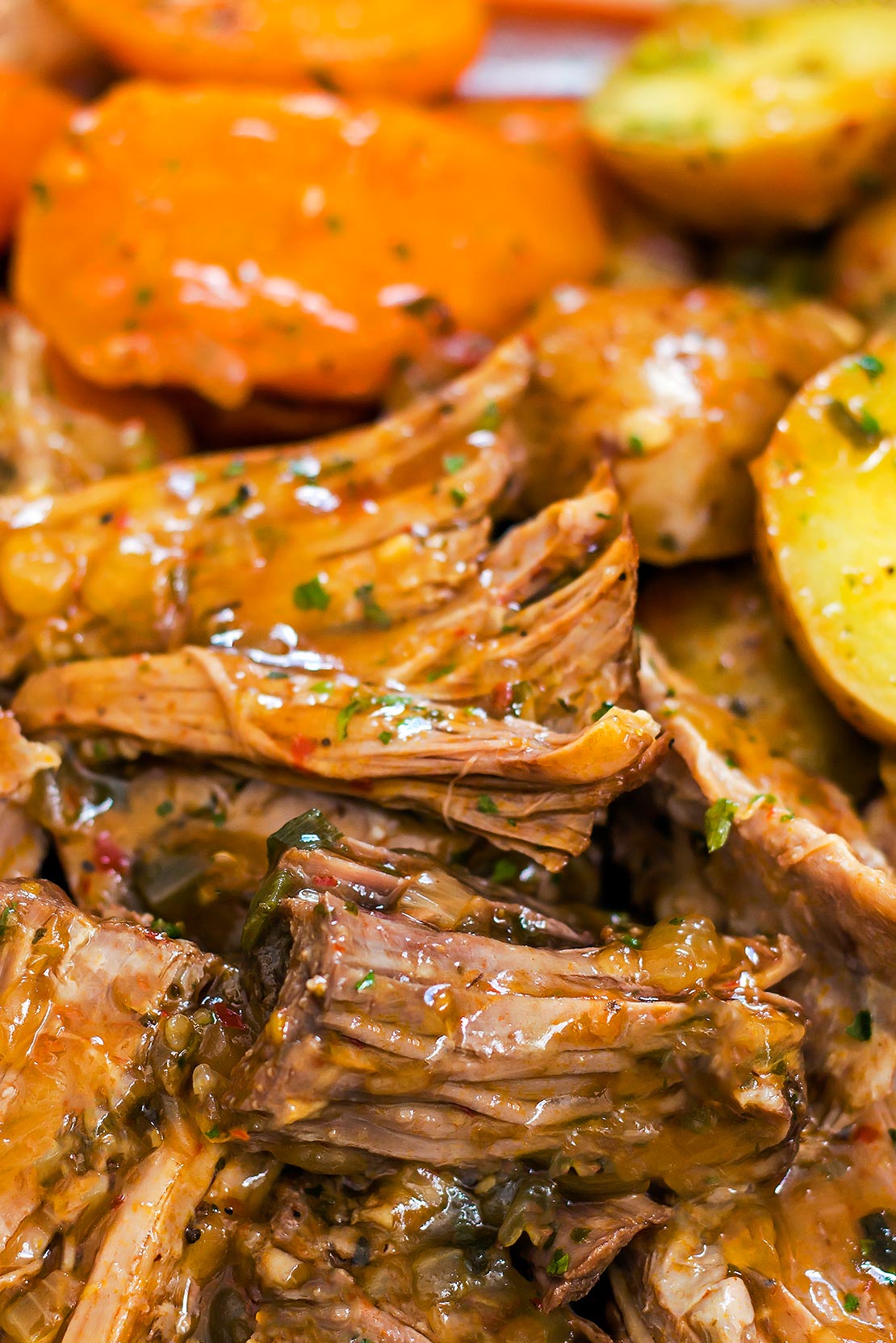 If you are intimidated by cooking large cuts of meat like roasts, this slow cooker pot roast is a perfect dish to learn how. The best part of this recipe is that you can prepare both your meat and sides at once. You also have a choice regarding what type of roast your want to cook such as an eye of round roast, sirloin roast, or chuck roast.

Your focus won't be drawn in multiple directions while you are trying to cook your beef roast to tender perfection. This recipe also means you will have much less mess than if you were cooking your potatoes, carrots, and roast beef separately on the stove or in the oven. You can also feel free to get creative here by adding other veggies if you like. Mushrooms, celery, turnip, cubed celeriac, rutabaga, and parsnips would also be delicious in this pot roast.

First, you should season your roast all over with salt and black pepper. Next, you heat the oil in a large skillet on the stove and brown the beef until golden on all sides over medium-high heat. This step helps create a crust to lock in juices and keep the meat tender. Additionally, it builds in a caramelized flavor that will make the beef even more delicious than it already is.

A heavy-bottomed saucepan that conducts a lot of heat, like cast iron, works particularly great here. However, a nonstick skillet or dutch oven should be fine as well. Next, you transfer the roast to your slow cooker. If you have a slow cooker with browning function (like this Ninja Multi-Cooker) you don’t even need an extra pan for this step. 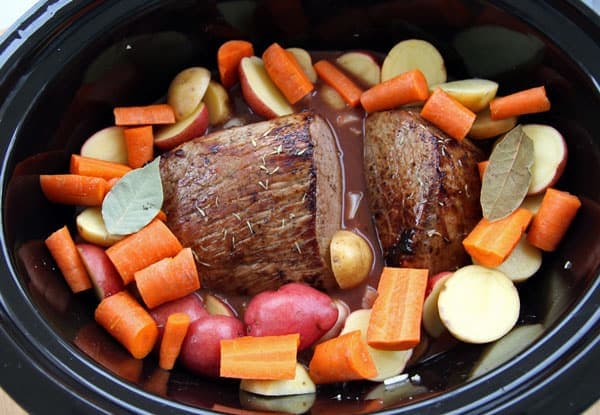 Adding the Other Ingredients

Afterward, keep the pan on the stove and add in flour followed by tomato paste. The idea is to cook this mixture out for a minute in order to remove the flour’s raw taste. This flour will help thicken up the liquids in the pot roast. However, if you like a thicker sauce, you can make a cornstarch slurry in a bowl to add at the end of cooking if you like. The red wine goes in next which is a perfect pairing to red meat like beef. The red wine will help pick up any caramelized bits on the bottom of the pan. These add plenty of flavour to your sauce.

Next, you add your beef broth and Worcestershire sauce and pour the beef broth mixture over the roast in the slow cooker. You can use any broth you have on hand, but beef broth is best.

The vegetables, including onions, garlic, carrots, and white or red potatoes, as well as the thyme and bay leaves, go in the slow cooker last. You want to ensure that the pieces of veggies are still chunky as they will have to hold up to a long cooking time.

The slow cooker pot roast will take a total time of 4 to 5 hours on the high setting or 8 to 9 hours on a low setting, or until fork tender. Once ready, you will have a complete meal with very little effort on your part. 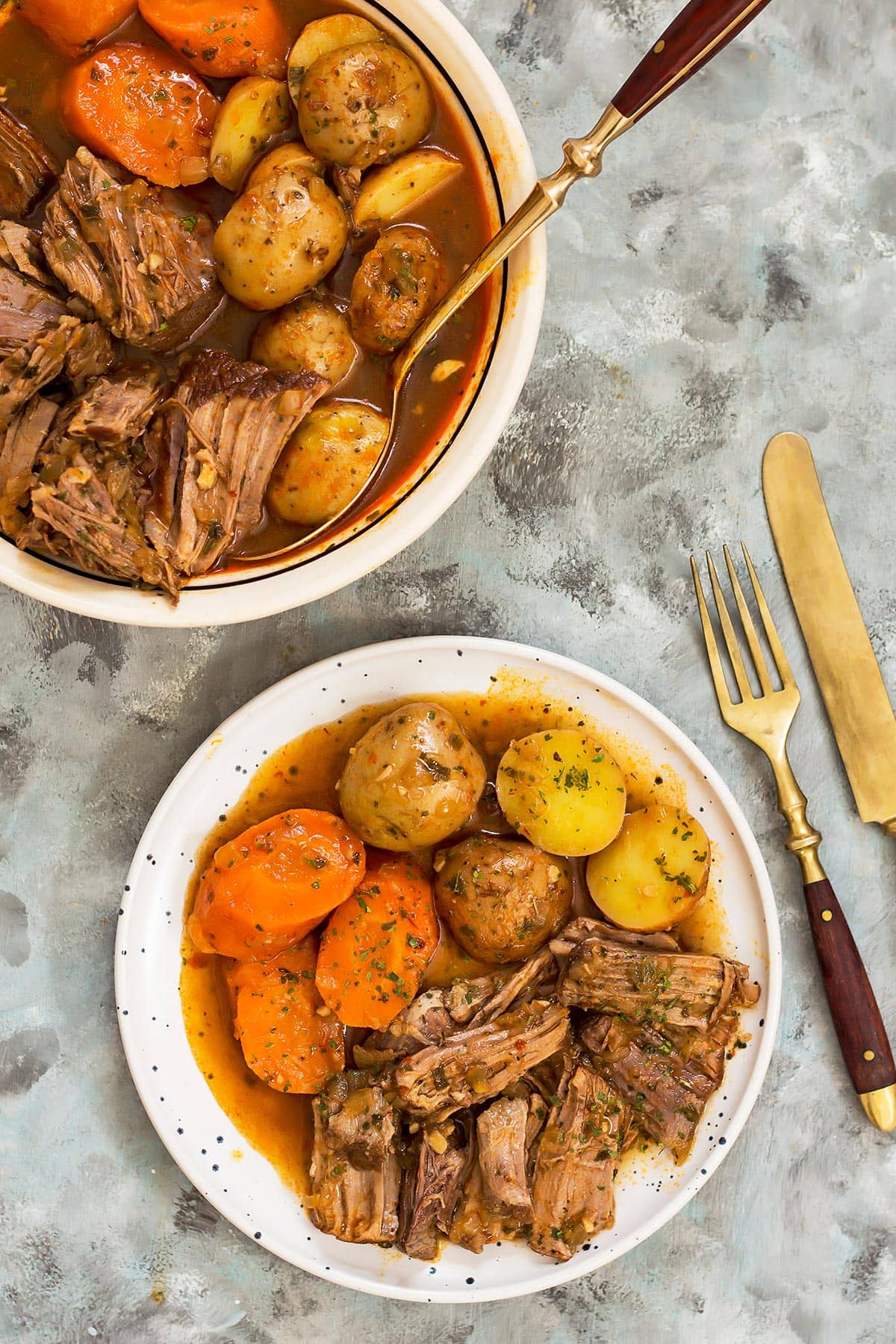 Should You Brown the Pot Roast Before Adding to Your Slow Cooker?

I recommend doing so because it promotes a roast with a better flavour. Additionally, this pot roast recipe is so simple that the added step really brings all the ingredients to life.

Searing meat produces a more intricately tasting dish, incorporating a combination of caramelized and bitter flavours. In culinary terms, this is called the Maillard reaction and is a heavily sought-after feature for braised meat dishes. A somewhat contended theory also states that searing meat will help lock in the juices ensuring a tender result.

Finally, browned meat just looks a lot more attractive than something that is pale in colour. If you are really tight on time, you could forgo the browning step. However, I highly recommend it as it will result in a much tastier, more attractive dish. Plus, it only tacks on a few extra minutes. 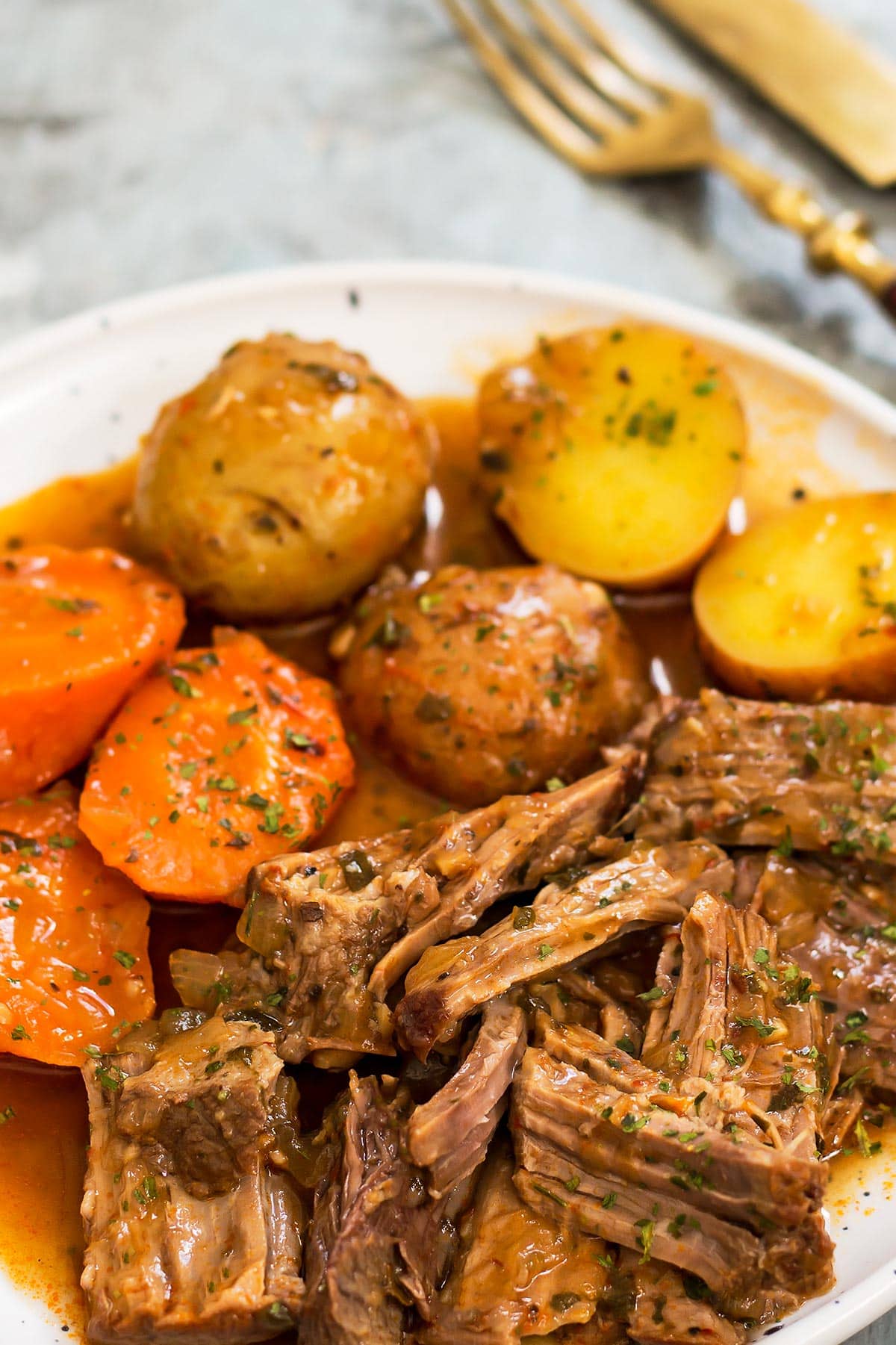 What Type of Beef Roast Should I Use?

I’ve made this roast with different cuts of beef. You may think that a leaner roast like sirloin or eye of round may not result in the most tender roast, but it actually does. This is partly due to the long and slow cooking process as well as the red wine in the beef broth mixture.

Red wine is acidic and helps break down tougher cuts of meat. By the end of cooking, the roast should be easy to slice into tender pieces to douse with gravy or serve on sandwiches the next day. And if you cook eye of round for an extra hour or two, you may even be able to pull it about into bite sized chunks. Although, the meat tends to be drier at this point, and you’ll have to moisten it up with plenty of the cooking liquid.

A cut with more marbling (like a chuck roast) will be so tender that it basically just falls apart at the end of cooking time. Chuck roast has a lot of fat and a rich taste. Either way, any roast should come out moist, tender, and perfect every time!

How Long Can You Keep a Beef Roast in a Slow Cooker?

The answer is, it depends. If you cook your pot roast on low, this roast should take between 8 and 9 hours. On the other hand, it should only take 4 to 5 hours on low heat. However, there is some variability depending on how hot your slow cooker gets and what cut of beef you are using. For instance, a tougher roast like an eye of round could benefit from a longer length of time. On the low end of the time frames, you’ll have to serve it thinly sliced. If you want to be fall-apart tender, you may even have to add an hour to the higher end of the suggested time. On the other hand, a chuck roast may be better at the shorter end of the spectrum.

Additionally, many people might think that you can’t cook a beef roast for too long, but it turns out that you can. Sometimes, if cooked too long, the roast might actually start to toughen up again even though it reached tender status before.

If cooked too long, eventually the protein will lose all of its moisture resulting in a stringy consistency. Just be mindful as you cook your roast to prevent overcooking. A nice way of testing doneness is by inserting a fork into the meat. If it goes in almost as easily as butter, you have a perfectly tender roast on your hands.

If you would like to modify this recipe in any way, it is very easy to do so. Here are some ideas. 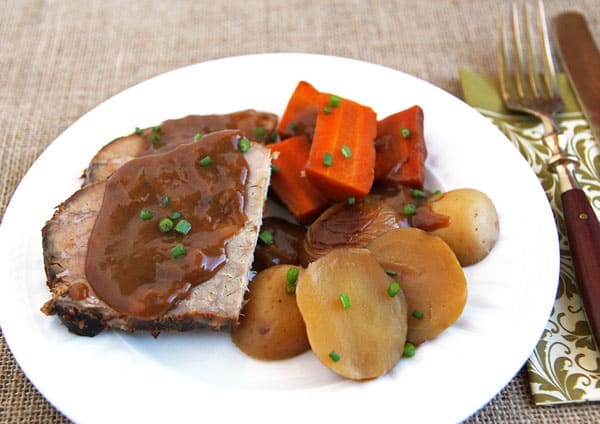 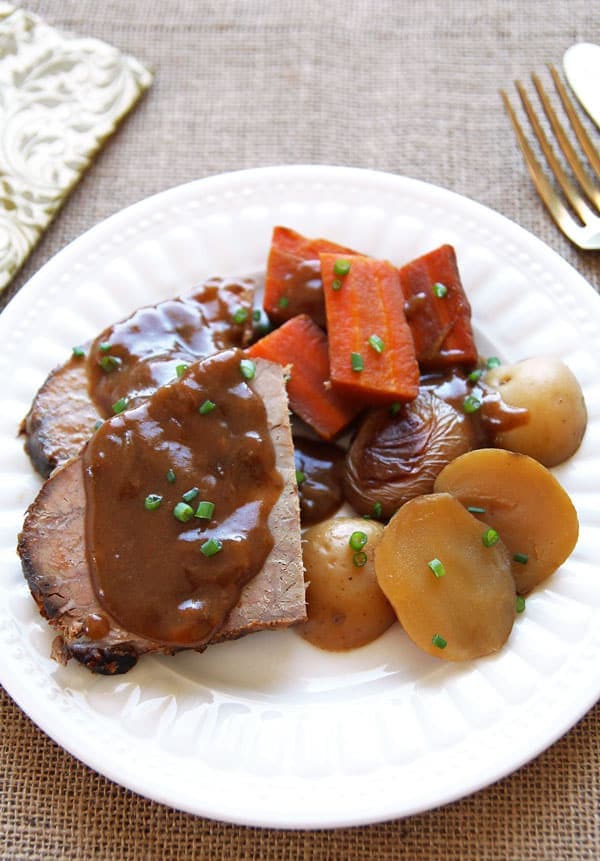 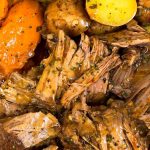 Make an impressive one pot slow cooker meal with minimal effort. After 4 to 9 hours you have a perfectly tender pot roast with gravy, potatoes, and carrots as sides.