This Instant Pot Pulled Pork Adobo includes saucy, tender shredded pork shoulder perfect for eating as a taco. This pork is a Mexican spin on traditional pulled pork in that it contains a little heat from Ancho chilis, and fragrant cinnamon and cloves. 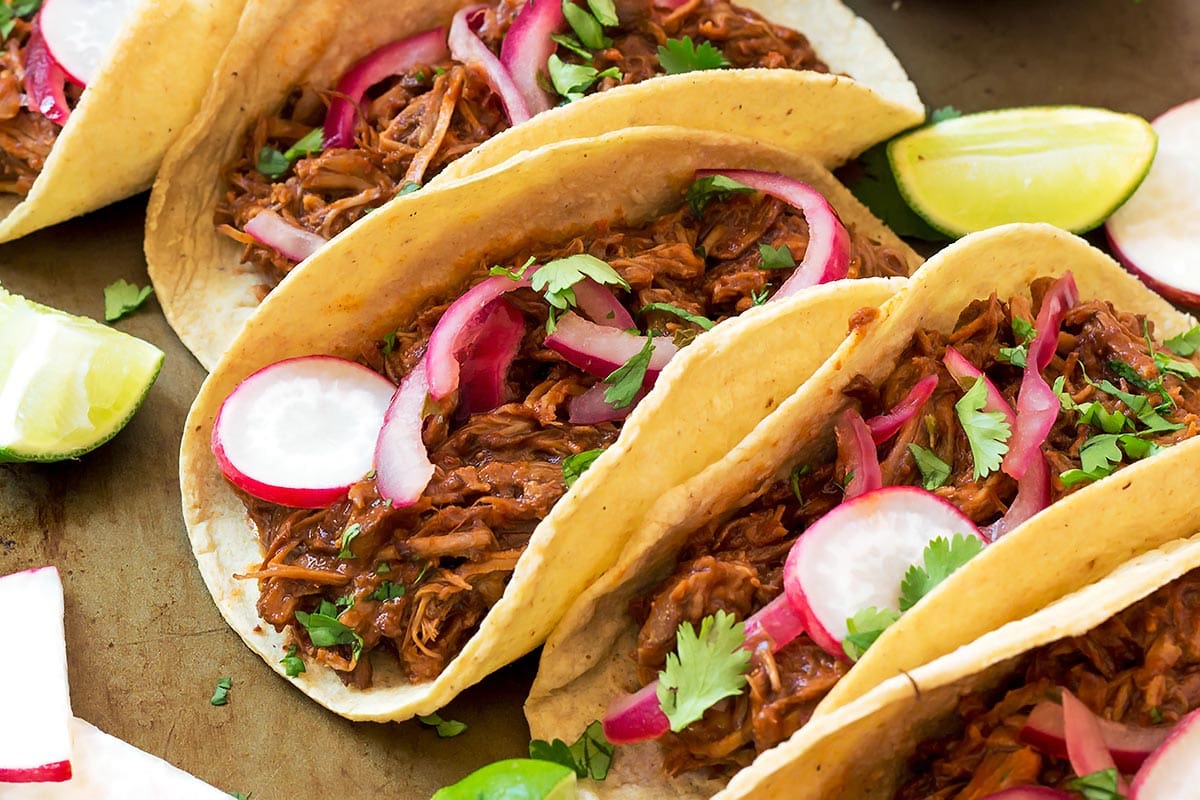 This amazing recipe was part of a Christmas gift exchange with the amazing mom group we have here in our chosen hometown of San Miguel de Allende, Mexico. My secret santa knew my love for food and recipes. I received jars of delicious red and green salsas, chiles moritas, purple beans (ayocotes), and handwritten Mexican family recipes.

One of the recipes was for this authentic adobo sauce that is typically served with pork and beans. I completely fell in love with the flavours of the sauce and adapted it into this Instant Pot pork recipe.

What is Mexican Adobo Sauce?

This sauce is a thick blend of tomatoes, spices, and chili peppers. Sometimes it even includes vinegar. The sauce's appearance is earthy and reddish-brown, because of the ancho chilies and tomatoes. It has the consistency of barbecue sauce, and in fact, is frequently used in meat dishes. As a result, it is perfect here for infusing luscious pork shoulder meat with tons of flavour and coating it at the end of cooking in this Instant Pot pork recipe.

Dried ancho chiles are a key element of adobo sauce. Sometimes, you can locate them at the grocery store in the produce section. However, if you can't, you should be able to locate them at a Mexican/Latin food store, or in specialty local or online spice shops.

Ancho chili peppers are the dried version of ripe poblano peppers. Most commonly, you will find green poblano peppers in the grocery store, but these are actually unripe. Once ripened, they turn red and develop an appealing sweetness. Ancho chili peppers have some heat ranging from mild to medium. They are also extremely fruity with a hint of a raisin taste. Between its sweetness and savouriness, it is easy to determine why Ancho chilies are an integral part of meat-based dishes in Mexico such as this Instant Pot pork. 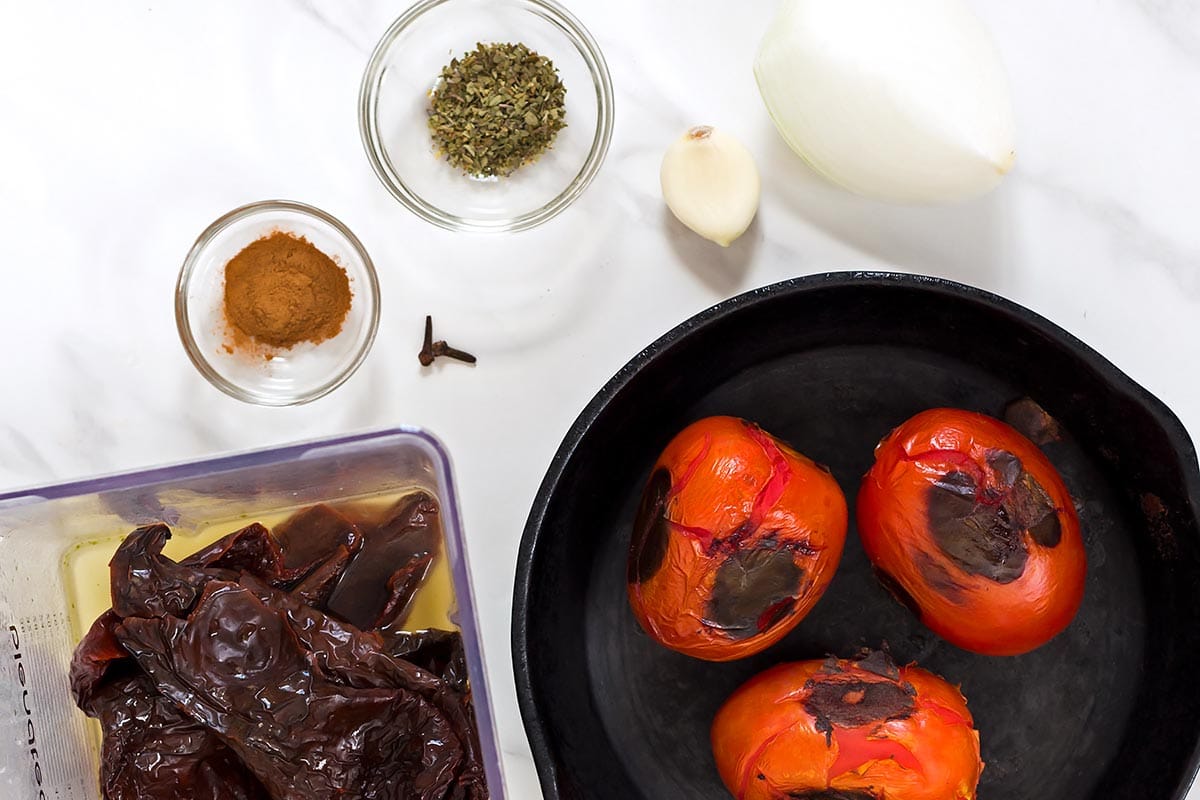 To make this Instant Pot pulled pork adobo recipe, you must start by soaking the Ancho chili pepper in hot water (remove the seeds first for a mild adobo sauce). This is to rehydrate them so that they blend up into a sauce easily and wake up their flavour.

Roasting tomatoes is a great way to develop some smoky and sweet flavour. This is also an excellent step if you are working with slightly under-ripe tomatoes as it will make them taste better. 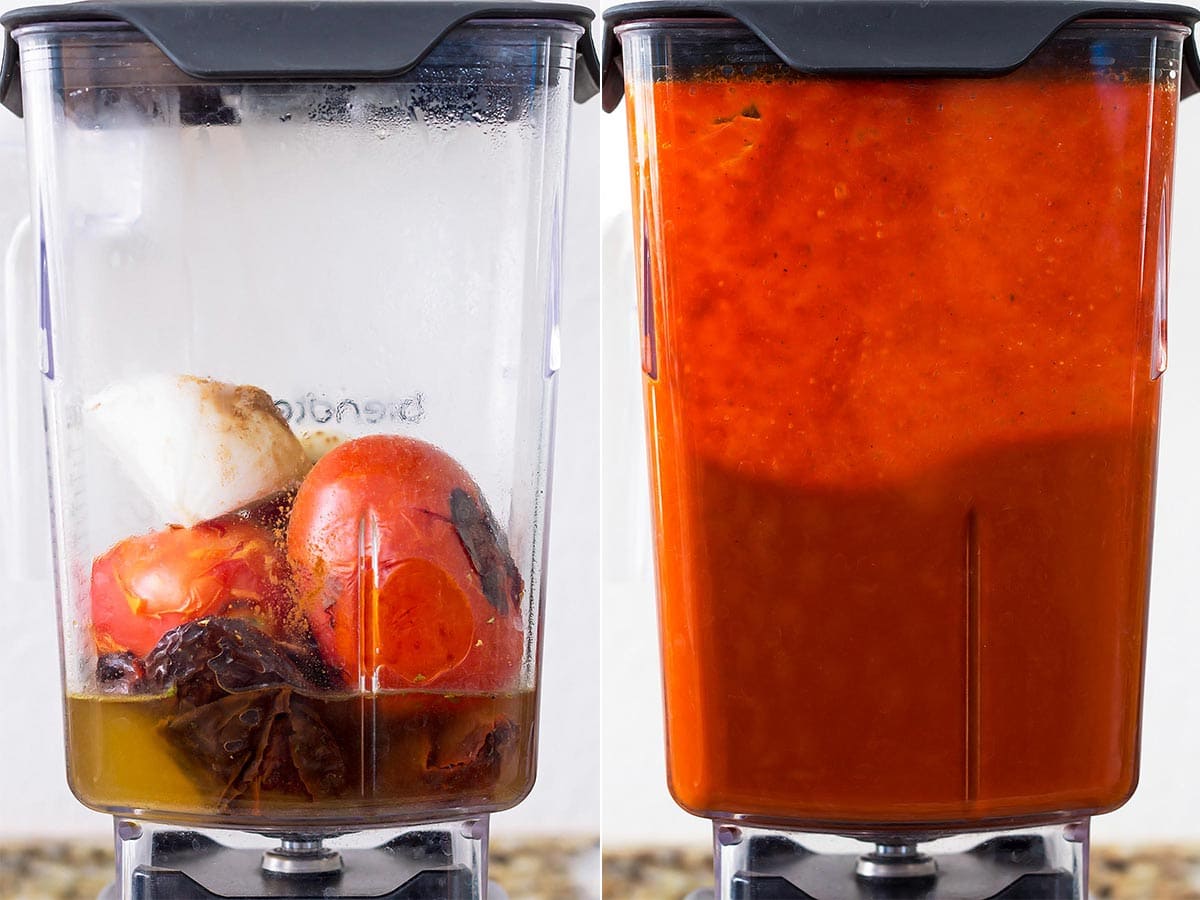 Afterward, you combine the tomatoes in a blender with the soaked Ancho chili peppers, onion, garlic, 1 cup of beef broth, dried oregano, cinnamon, and cloves. You don't need to add any seasoning, such as black pepper or kosher salt, to the sauce unless you are using low sodium beef broth. If you only have low sodium broth, you may want to taste the sauce and add a little more seasoning. If you don't have a high-speed blender, you could blend it in a food processor as well, although you may not achieve quite as smooth as sauce. Luckily, pressure cooking should break down the ingredients further. Making the sauce should only take 10 or 15 mins total after soaking the chilies.

Once blended into a smooth sauce it goes over the pork shoulder roast before cooking on high pressure. The total cooking time of this Instant Pot pork recipe should only be 45 mins total with a natural pressure release of 15 minutes. In the end, you may have to manually release the remaining pressure if it hasn't dissipated completely. You could quick release, but giving the pork some extra time in the pressure cooker allows it to absorb more of those juices. 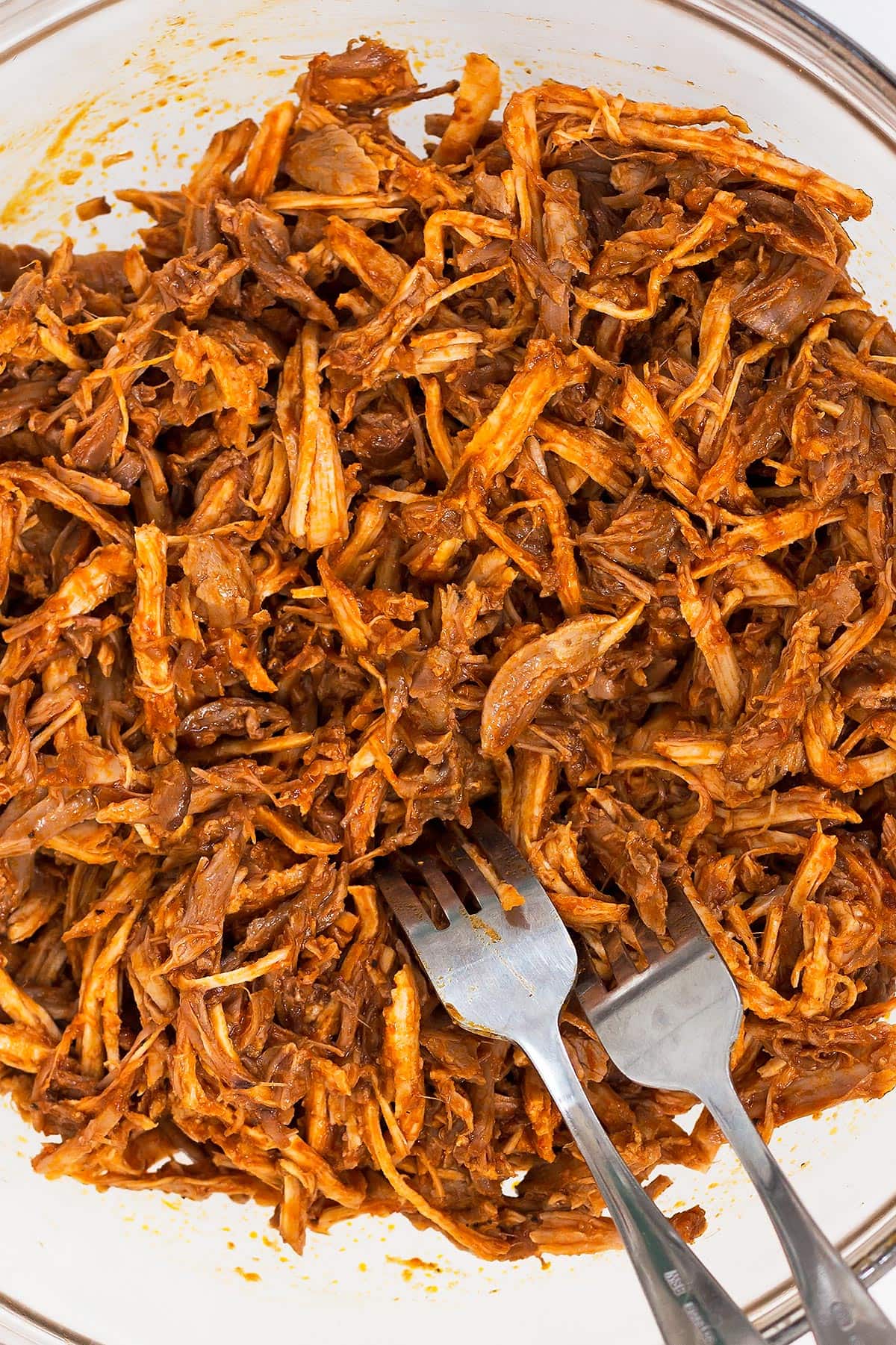 Since this Instant Pot pork recipe includes a tasty Mexican sauce, the shredded pork is particularly great to eat as tacos. You can have them in either flour or corn tortillas, although, corn torillas are particularly great. Of course, you should definitely top them with traditional toppings like sliced radishes, cilantro, and quick-pickled onions. These add some contrasting colour and flavour, and help to cut through the richness of the pork.

If you are more of a traditionalist with shredded pork, this is a great recipe serve it on a bun with your favorites tangy creamy slaw. Another option includes adding it as part of a lunch bowl with rice, black beans, avocado, and salsa. Alternatively, you could put it on pizza as a unique pizza topping or have it on baked nachos. 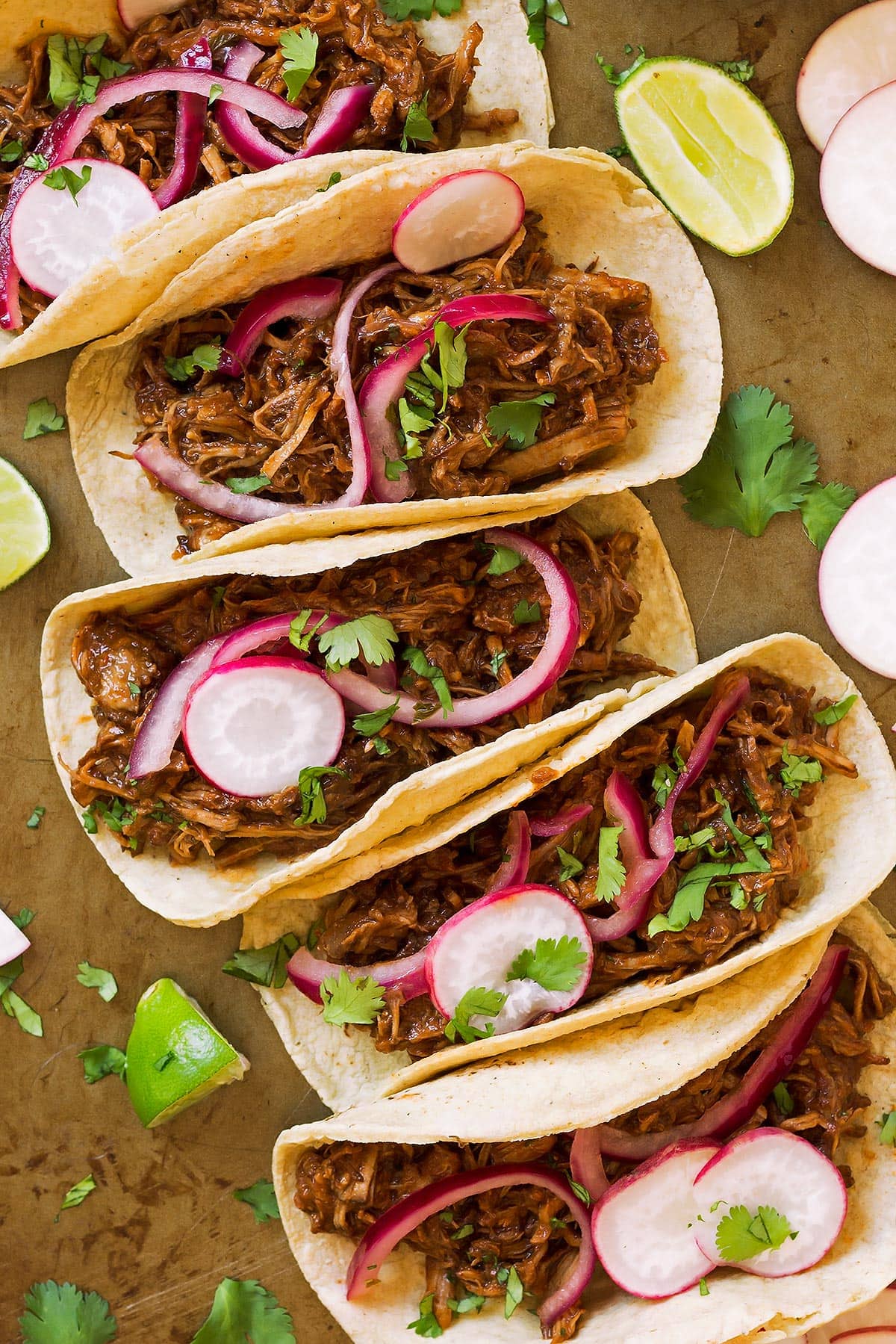 How to Use the Sauce

After your Instant Pot pork is ready, you will want to toss the pork butt with some of the sauce to keep it moist. You may have some sauce leftover, though, and will need a way to use it up. You could reduce it on the stove to thicken it more before adding to your pork or enjoying with other recipes if a thicker consistency is desired.

My friend who gave me this recipe gifted it to me together with some striking purple beans. In Spanish, they are called frijoles ayocotes (later I learned they are scarlet runner beans). The ayocote beans are traditionally served together with the pork in sauce. You can see the Ayocotes en Adobo in this video.

You could also add some of the sauce to rice as you cook it which would infuse the grains with flavour. Additionally, it would make a wonderful marinade for either meat or seafood that you intend to throw on the grill. While grilling, you could brush your chosen protein with some of the additional sauce.

Adobo is also delicious stirred into soup base for a more interesting taste or added to vinaigrettes or aiolis. 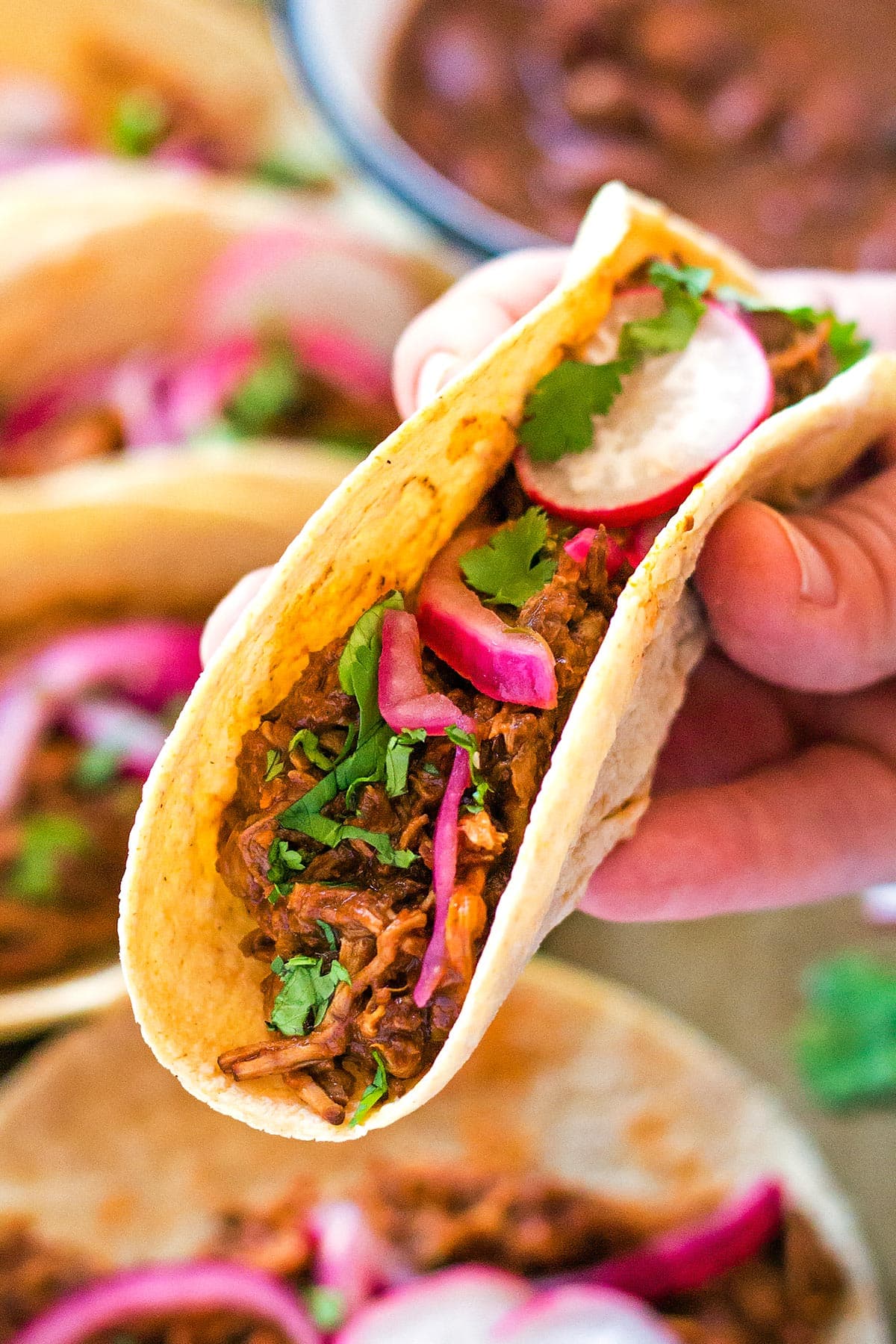 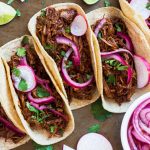 This Instant Pot Pulled Pork Adobo includes saucy, tender shredded pork perfect for eating as a taco. This pork is a Mexican spin on traditional shredded pork in that it contains a little heat from Ancho chilis, and fragrant cinnamon and cloves.

*3 roasted red peppers can be substituted in a pinch