Malaysia was the place where my husband and I made up for 8 months of not going to the movies. In Thailand, we just never went, because nothing was playing in English. Luckily, Malaysia shows the newest Hollywood movies in English (although with Malay and some Chinese subtitles).

Mostly, the Malaysian theaters are located in shopping malls. On our way to buy tickets and popcorn, we make the most interesting food discoveries (like the little concession stall selling only macarons in front of the theater in Penang). 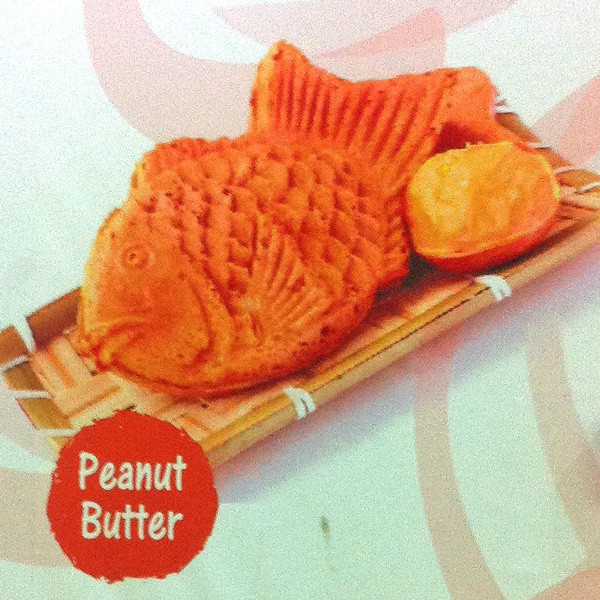 When we were in Melaka in Southern Malaysia, we went to see Expendables 2. The theater was (like so often) located on the highest floor of the shopping mall. While we worked our way up with the escalators, a wall poster for these fish-shaped waffles caught our attention.

Despite the writing on the poster, I only learned later that these are called Taiyaki and are a Japanese dessert specialty. Traditionally they are filled with a sweet red bean paste.

Of the different sweet and savory options offered at this stall, a filling of peanut butter sounded most appealing to us.

And here is how it was prepared:

First, the attendant brushed some waffle batter into the cavity of a mold. Next, he filled it with a scoop of peanut butter, which he spread out a bit, before pouring more waffle batter on top. Then he closed the fish waffle iron and baked it for a couple minutes on each side.

And about five minutes later, we held our first, not so traditional, Taiyaki in our hands. 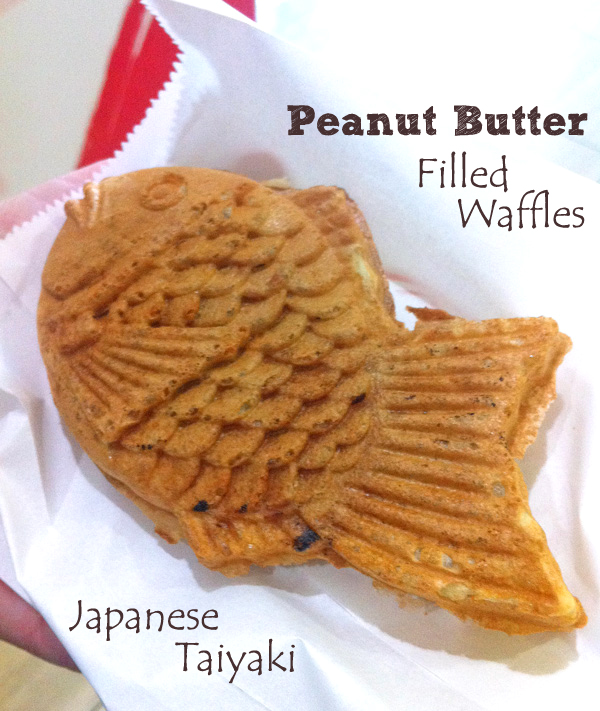 The texture of the waffle is a little more crispy than the regular waffles we are used to. And the filling of warm, gooey peanut butter made this an absolutely delicious pre-movie snack.

Later, I had to think that one should be able to create a similar, filled waffle with a regular waffle iron. I once found a recipe for cream cheese-stuffed waffles, and I was entirely convinced that filled waffles at home are possible, and a thing. I wondered to myself about why I hadn't come across them sooner!

Of course, one could go ahead and buy this Taiyaki Waffle Iron from Amazon. It makes two fish-shaped waffles at once, but unlike other waffle irons, it has no independent heat source and is heated on top of a stove burner.

However, unless you are an absolute Taiyaki enthusiast, a regular waffle iron will also do. Here on Bali I have neither one available, so this is an adaptation of the recipe from Cheeky Kitchen. 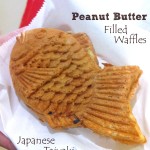 An interesting twist on traditional waffles inspired by Japanese Taiyaki. Regular waffles are stuffed with peanut butter, resulting in a slightly different breakfast treat or snack with warm, gooey filling when eaten warm.

Make It Whatever You Want!

Notes: You can also try all kinds of other waffle fillings. The options are endless.

Do you like your peanut butter paired with jam? Or try nutella, dulce de leche or cream cheese.
Maybe a savory filling is more up your alley? Try some tuna or ham and cheese or turkey and egg like they offered in Melaka.

Oh and by the way, for healthy grain free recipe try my coconut flour waffles.

Feel free to browse these similar recipes for your inspiration!