This easy Coconut Flour Waffles recipe makes delicious healthy waffles that are gluten free and paleo, with an option to also turn them into low carb/keto waffles. 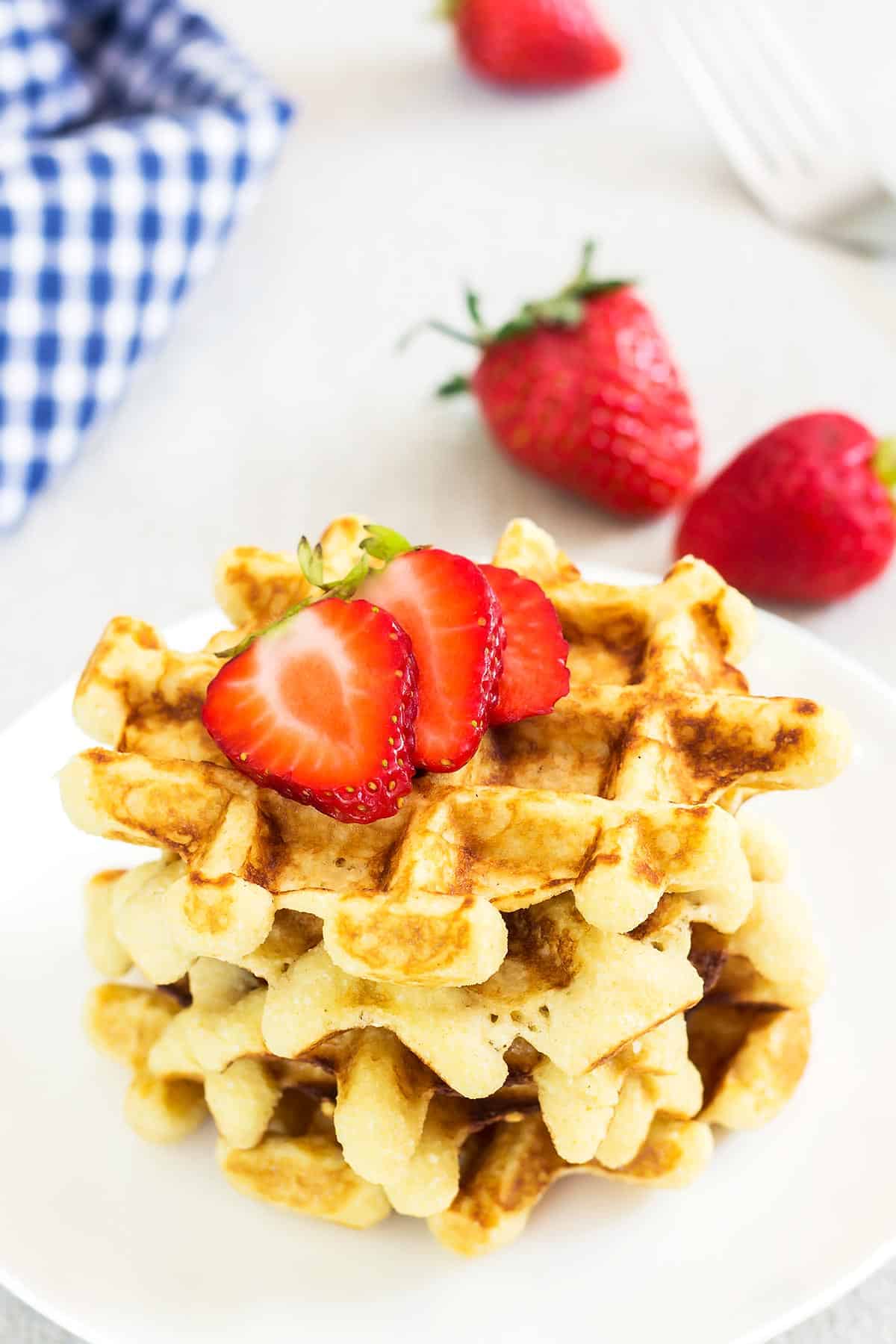 The Origins of these Waffles

We spent a month at my parents' house at the end of this summer. And in my family, that means a lot of cooking together and many shared meals.

My parents also recently renovated which includes an addition with a new large and gorgeous kitchen. It also meant I had to rediscover where my mom now stores everything in her cabinets.

On one of those explorations (I think I was looking for a roasting pan), I found a new waffle iron. I right away knew I had to make use of the waffle maker during our visit.

For a while already I have been meaning to try making waffles with coconut flour, but for the last 2 years, I have never had access to a waffle maker. However, after the huge success of my coconut flour pancakes, I knew that coconut flour must also make awesome grain free waffles. It does indeed! These gluten free waffles were a HUGE hit with my family.

I made several test batches and yet another batch to shoot the video and photos and each time the paleo waffles disappeared in no time. 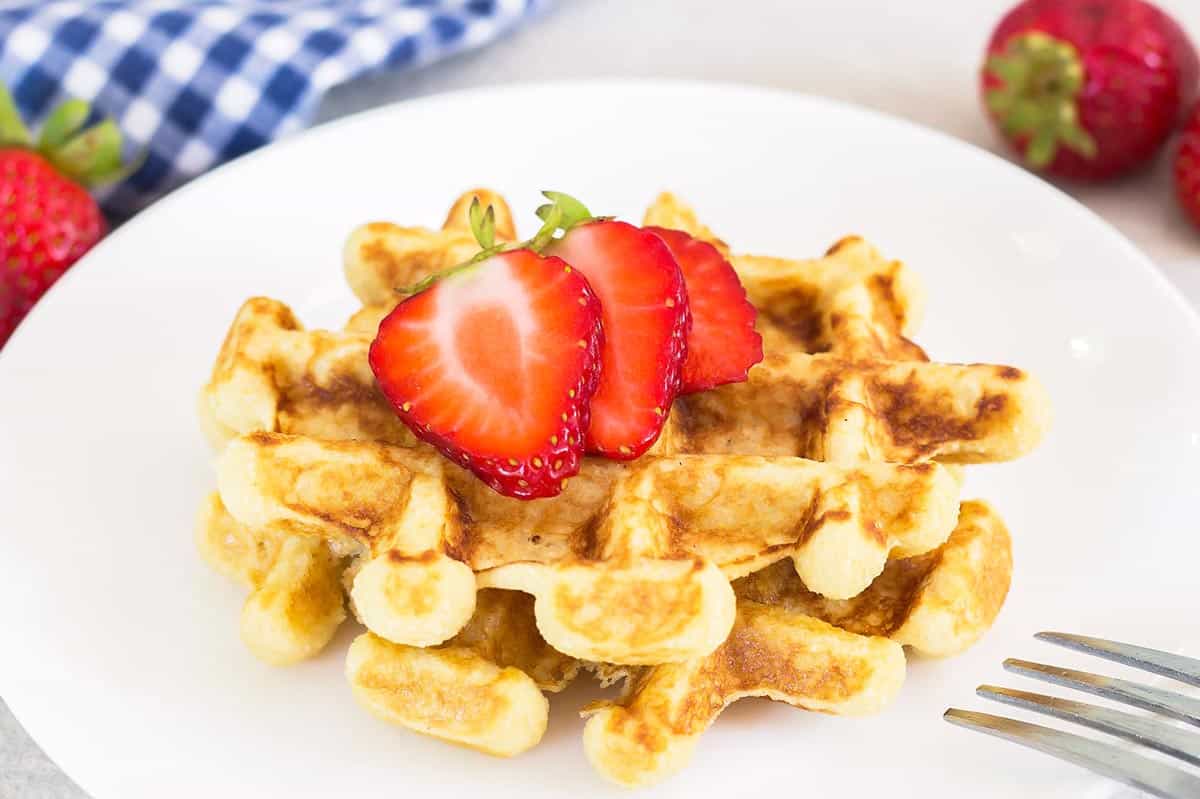 Are waffles sweet or savoury?

During my first test batch of this healthy waffle recipe, I didn't use any kind of sweetener. Since coconut flour already has a slightly sweet taste and because I usually eat waffles drizzled in maple syrup anyway, I didn't think it was needed.

Leaving them unsweetened also keeps the options open to enjoy these coconut waffles with whatever savoury toppings you might prefer. So in short, this healthy waffle batter can be the base for both, sweet and savoury wheat free waffles.

While I was recipe testing my sister dropped by and tried one. She was quite surprised they weren't sweet. Turns out she usually eats waffles plain - no syrups, no dusting of icing sugar, nada!

So to accommodate her and everyone else who expects sweet waffles, I also tested a sweetened version of this simple waffle recipe in the waffle maker. The recipe box below now includes optional sweetener in this gluten free waffle recipe.

What sweeteners to use: 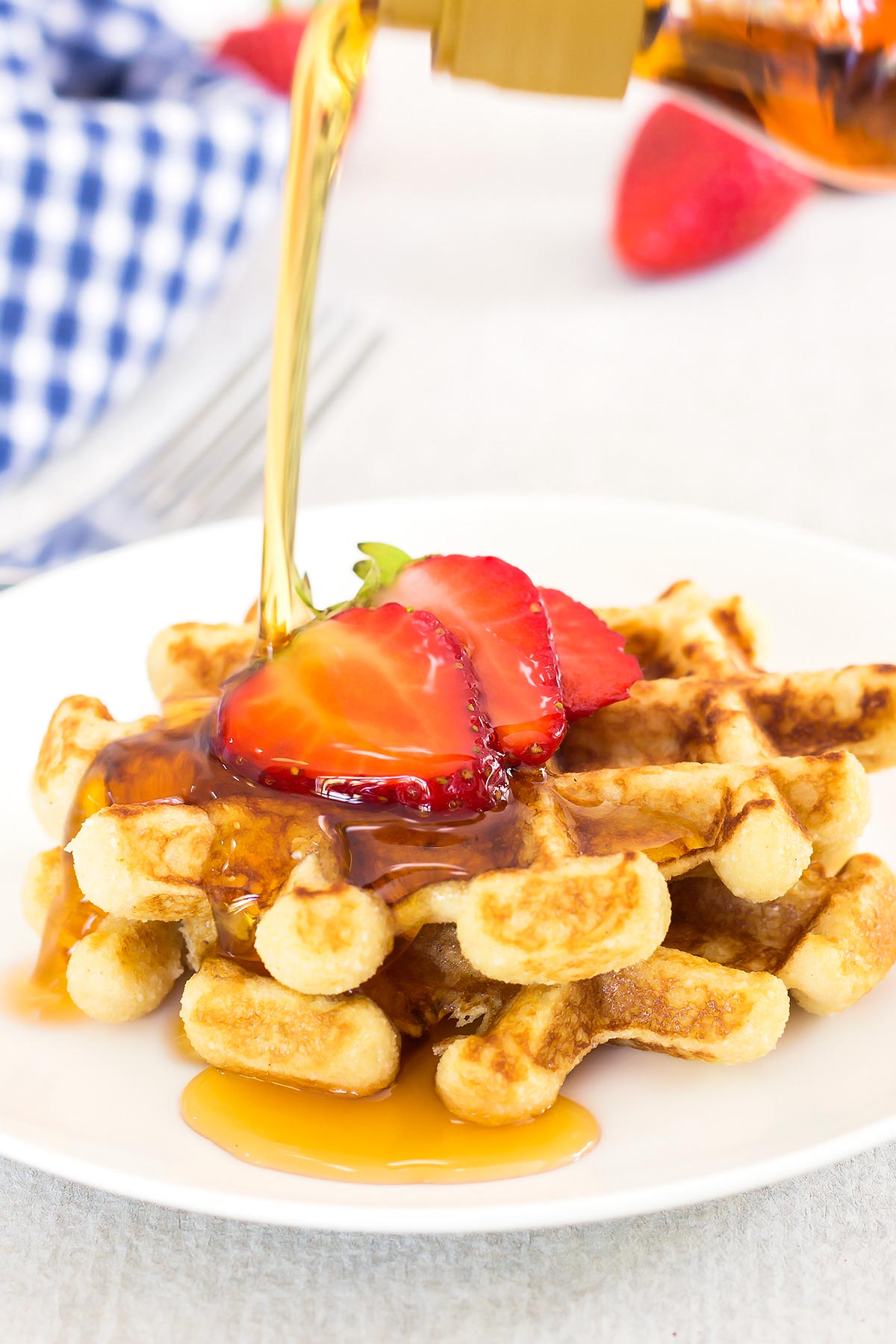 As I have mentioned before in my many coconut flour recipes, this flour alternative is quite unique in its characteristics. For this reason, recipes are specifically developed for it and there are no easy substitutions.

In my coconut flour quick bread recipes, I like to use tapioca starch or arrowroot flour to lighten up the batter, but I haven't found this at all necessary in this paleo waffle recipe. It produces light and fluffy coconut flour waffles without the added starch.

If you aren't used to baking or cooking with coconut flour, it is relatively easy to find in stores. Simply look in the traditional baking aisle of your grocery store or wherever your store seems to keep more natural items. Alternatively, you can check out your local bulk food store or health store, or even order it online.

How to make waffles with coconut flour

Mixing up the batter for this these low carb waffles is super simple. To ensure even distribution, I like to whisk together all dry ingredients in one large bowl.

Then I whisk the eggs in a larger bowl before adding the milk, coconut oil, vanilla, and sweetener. To the wet mixture, I add the dry mix - this way there is no risk of flour pockets hiding at the bottom of the bowl. It is much more difficult to stir the wet mixture into the dry mixture and achieve a homogenous mixture.

Another way to whip up this easy healthy waffle batter is to add all ingredients to a blender and let it do the work of mixing everything together. This method only works because this is a grain-free waffle recipe, so there is no risk of over-developing the gluten in the batter (which results in tough baked goods with wheat flour). This is an excellent method if you are looking for fewer items to clean up and want to make this keto waffle recipe in a hurry. However, if you would like to scale up the recipe to double, you would have to mix the batches separately in the blender. 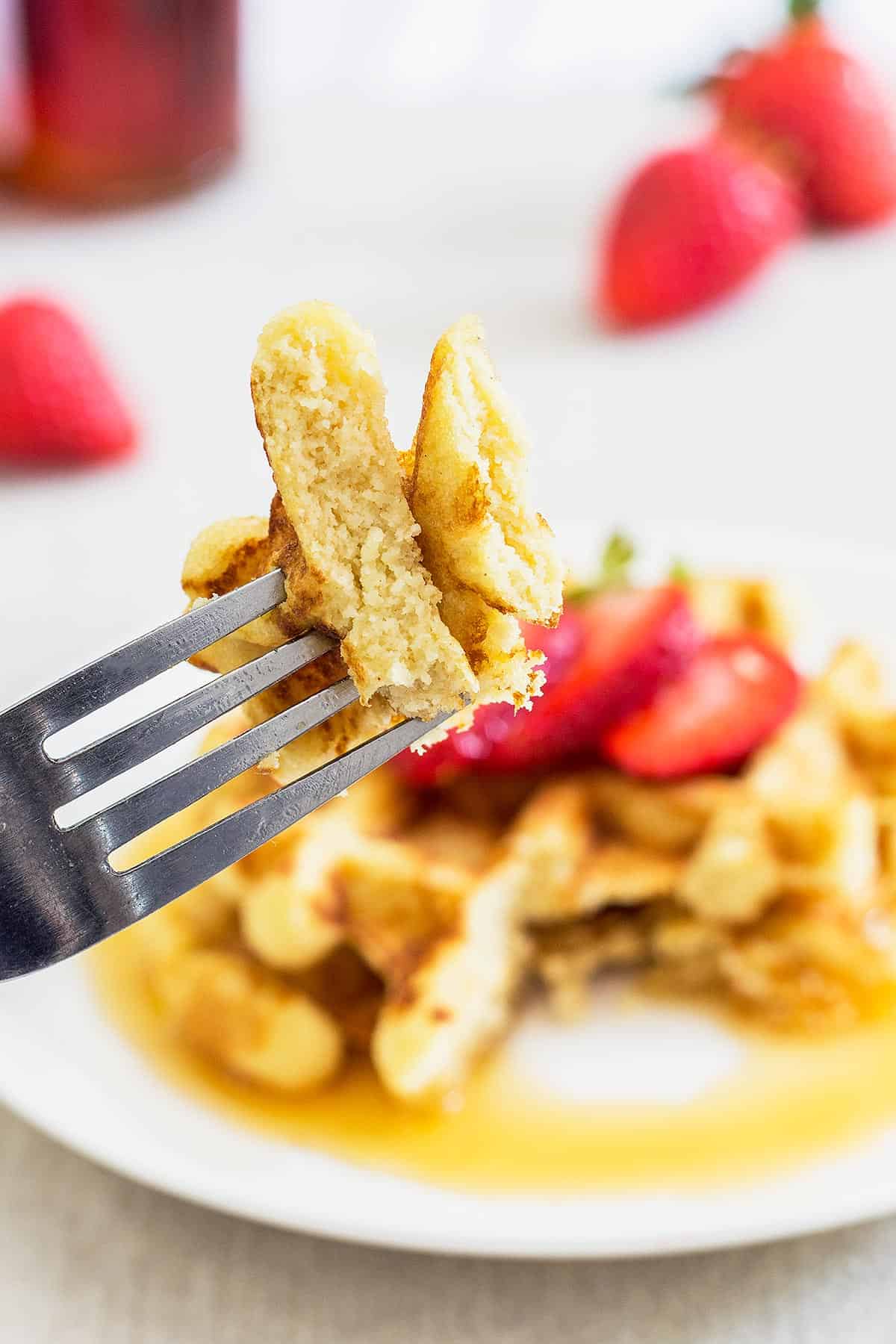 The waffles are done when they are golden brown and slightly crispy. During cooking in the waffle maker, you will see a lot of steam. This is generally a sign that the waffles are cooking. However, towards the end of cooking, the steam will subside. Depending on your waffle iron and the size of the waffle you are making, this can take 3-6 minutes.

I recommend that you set a timer for 3 minutes before checking. You want to make sure the top is starting to crust up before lifting the waffle maker to check so that the waffles don't tear. If they need a little longer to cook, you can close the waffle maker again and let them cook for a few minutes more.

For removal, I like to use a pair of tongs so that I don't burn my fingers. The waffles can be eaten immediately or placed in a very low oven to keep warm until you have cooked the rest of the batch. Alternatively, if you would like to have waffles on hand for quick breakfasts through the week, you could freeze them. In this case, you can put the cooked waffles in a freezer bag to freeze. Then, when you are ready for breakfast, you can pull them out and toast them until they are crispy and golden.

What are good toppings for coconut flour waffles?

Growing up in Germany we only ever had a light dusting of icing sugar on our waffles. These days I never keep icing sugar in the house, so I usually end up eating these coconut waffles the same I do pancakes: with fresh fruit and maple syrup.

Here are some more waffle topping ideas for your low carb waffles: 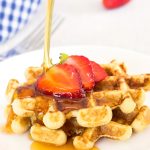 Nutrition values are calculated without sweetener

*I only sweeten waffles if I don't plan to eat them drizzled with syrup.
For low carb/keto waffles make them unsweetened or use sugar-free
monk fruit sweetener.
¼ cup granulated sugar/sweetener can be substituted for liquid sweetener