This comforting Potato Corn Chowder with Bacon is made dairy-free with the use of coconut milk. Vegan options included. 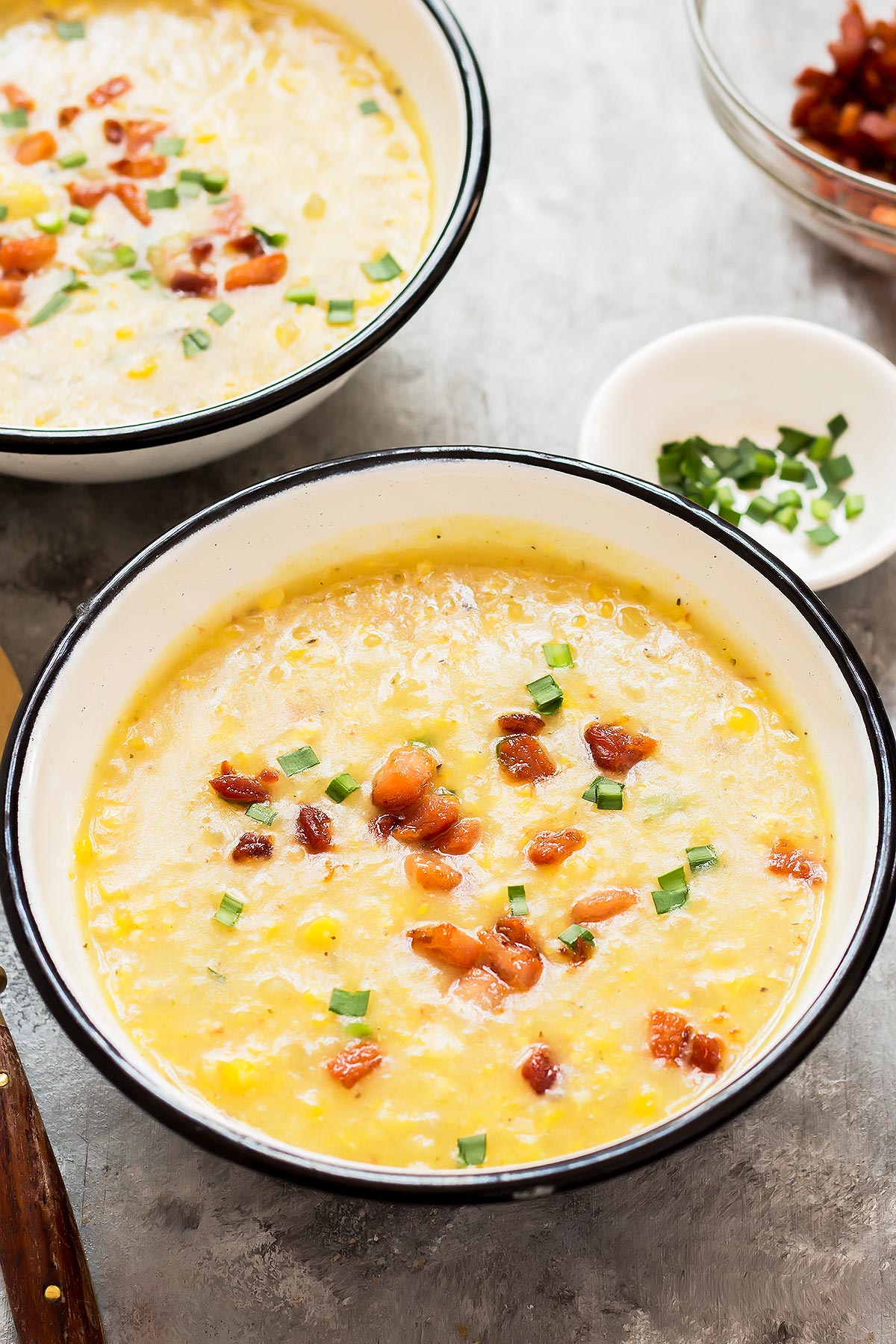 I think my husband and I have an unusual love for vegetable soup. Actually, I have been a soup lover for as long as I can remember. Growing up, my sisters may have complained whenever my mom made soup, but they were my favorite meals.

Konrad also grew up in a culture that gives soup the respect it deserves. His mom’s chicken noodle soup was a meal they enjoyed and cherished only on special occasions. Granted, making homemade noodles (like his mom does) is not a task for everyday weeknight meals.

Looking back over our almost 5 years of marriage, I realize there was a period of time when vegetable soup specifically became ‘our thing’. I seem to remember this now, because I often think about how our time in Thailand now is so different from when Konrad and I came here first in 2011. 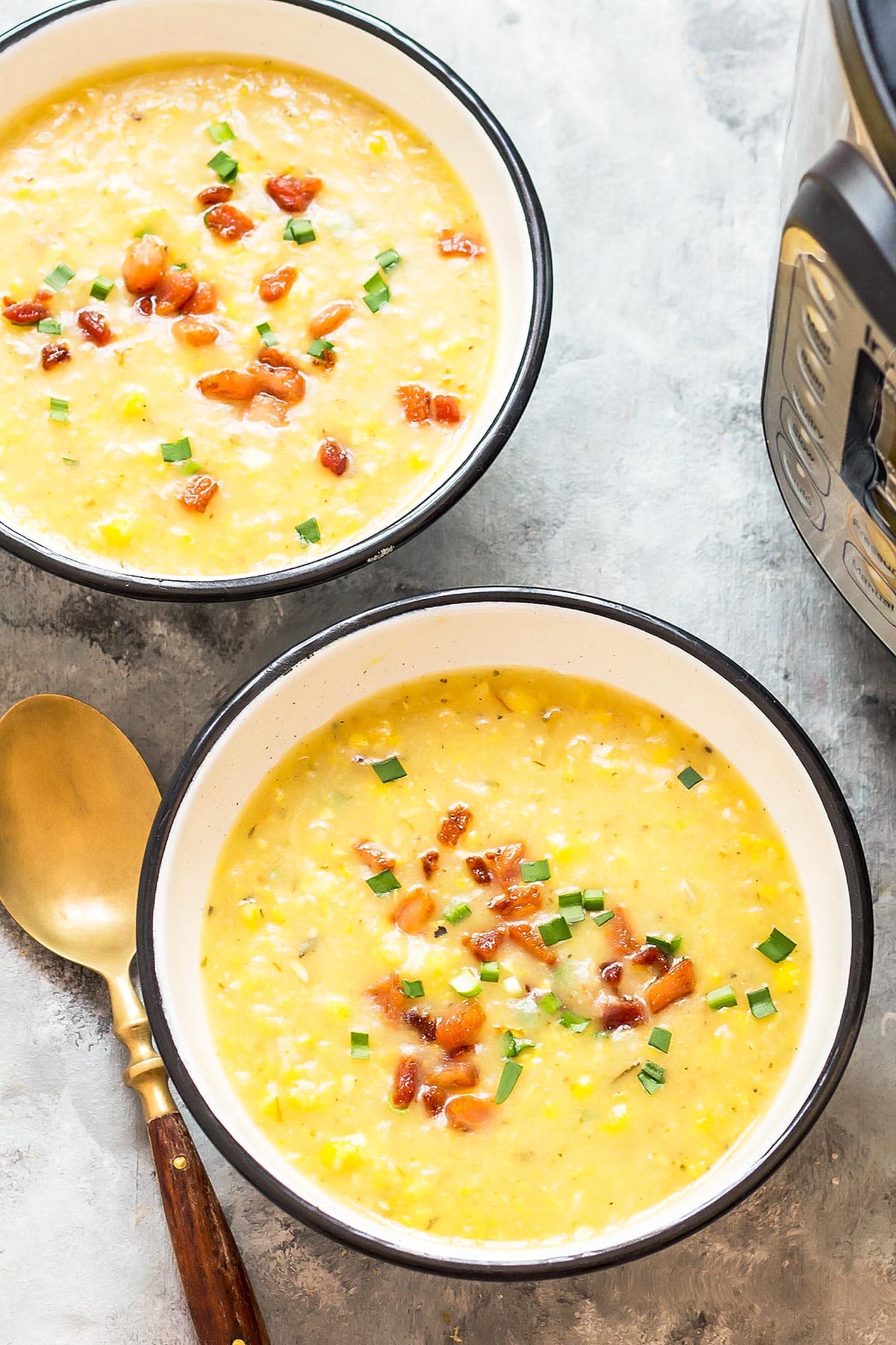 Thailand Then Vs. Now

Back then we rented a townhouse, which was much cheaper than our condo now, but was very sparsely furnished. For our entire time in that place, we cooked on one electric wok-style thing. I don’t even know how to explain it, but it looked similar to this and only lasted until 2 weeks before we moved out.

Needless to say, during that time we were very limited in regards to things we could cook. To be honest though, I wasn’t as good a cook back then and didn’t even enjoy cooking as much as I do now. Which means, we ate out a LOT! And since we were in Thailand, it was delicious and very affordable.

But even then, we sometimes didn’t feel like going out. Especially, once monsoon season hit. Driving on a scooter through torrential downpours in order to be able to eat was anything but enjoyable. 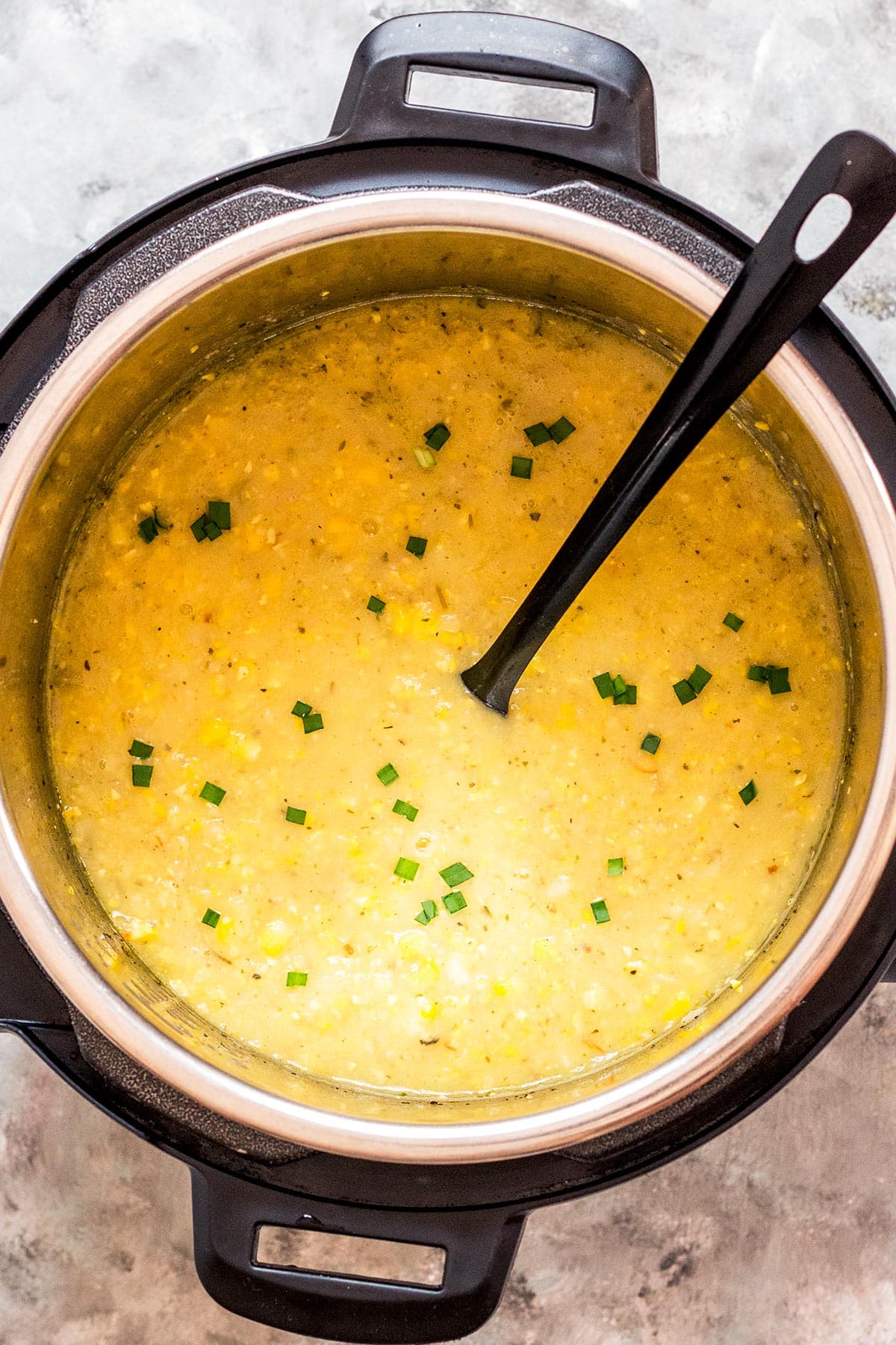 Soups turned out to be very easy to make in this wok-style thingy we had and it gave us an opportunity to make use of the many delicious and oh-so-cheap fresh vegetables from the market.

Somehow this love of vegetable soup stuck with us since then. Back in Canada we usually set on the slow

cooker with whatever assortment of veggies we could find in the fridge and 4-8 hours later we we had a delicious meal waiting for us. Usually. There where a few unfortunate vegetable combinations.

I made potato corn chowder for the first time in that townhouse; that was our first home in Thailand years ago. Being in Thailand again, must have brought back those memories, because somehow I ended up making corn chowder as one of the first meals in our condo here. 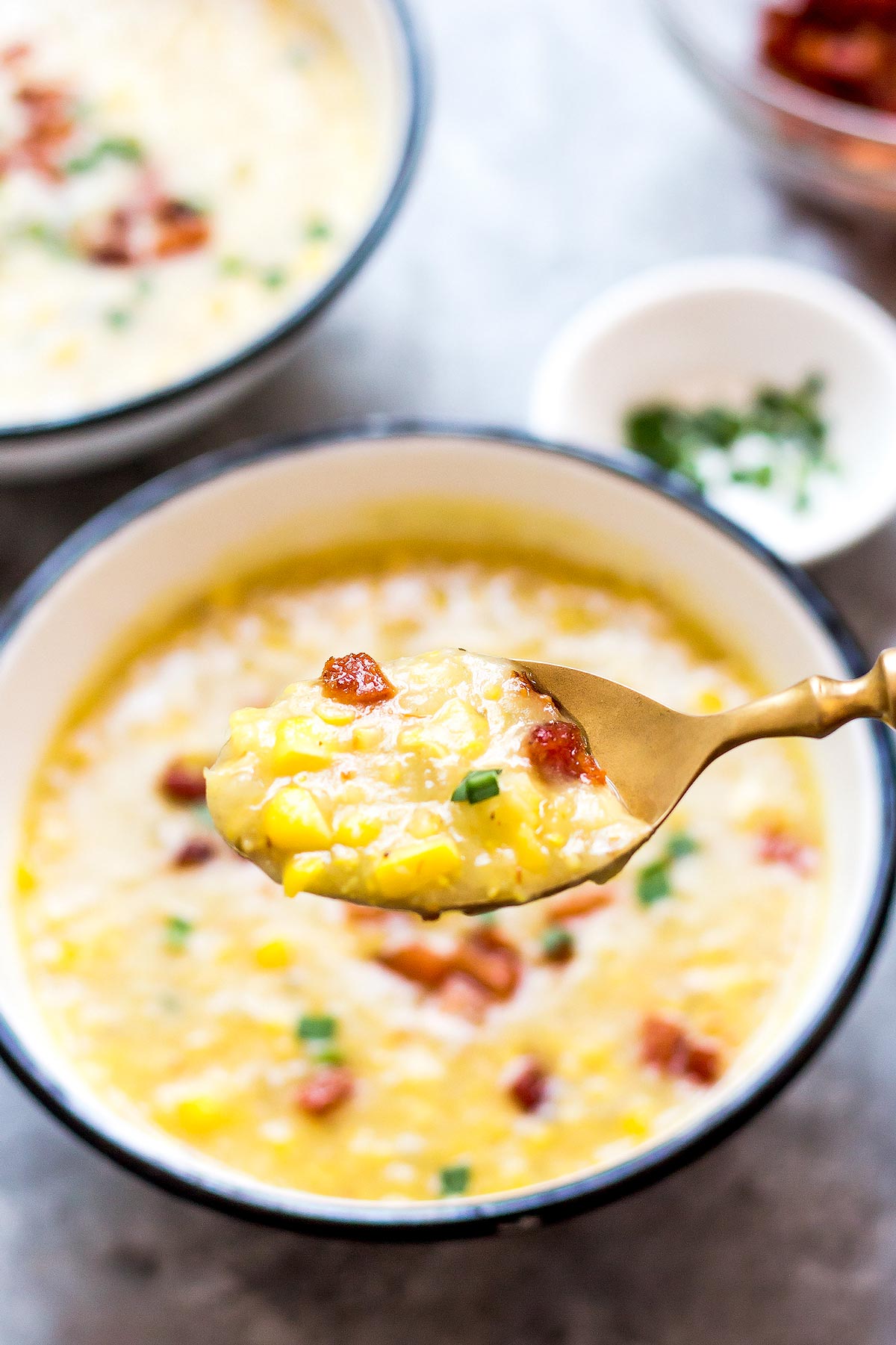 Try It with Coconut Milk!

Surprisingly, I have never shared it on here. Well, there is this Creamy Vegetable Soup which is like a corn chowder + a lot more veggies added.

Today’s potato corn chowder is simple and delicious. With just a few ingredients and little hands-on time, this makes an easy weeknight dinner.

I used coconut milk this time and it turned out delicious. But regular milk or half & half will work as well. 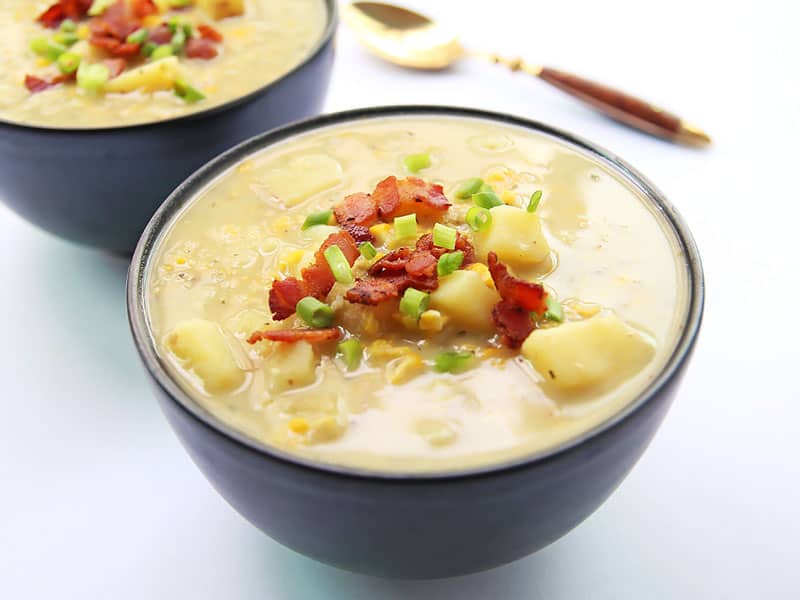 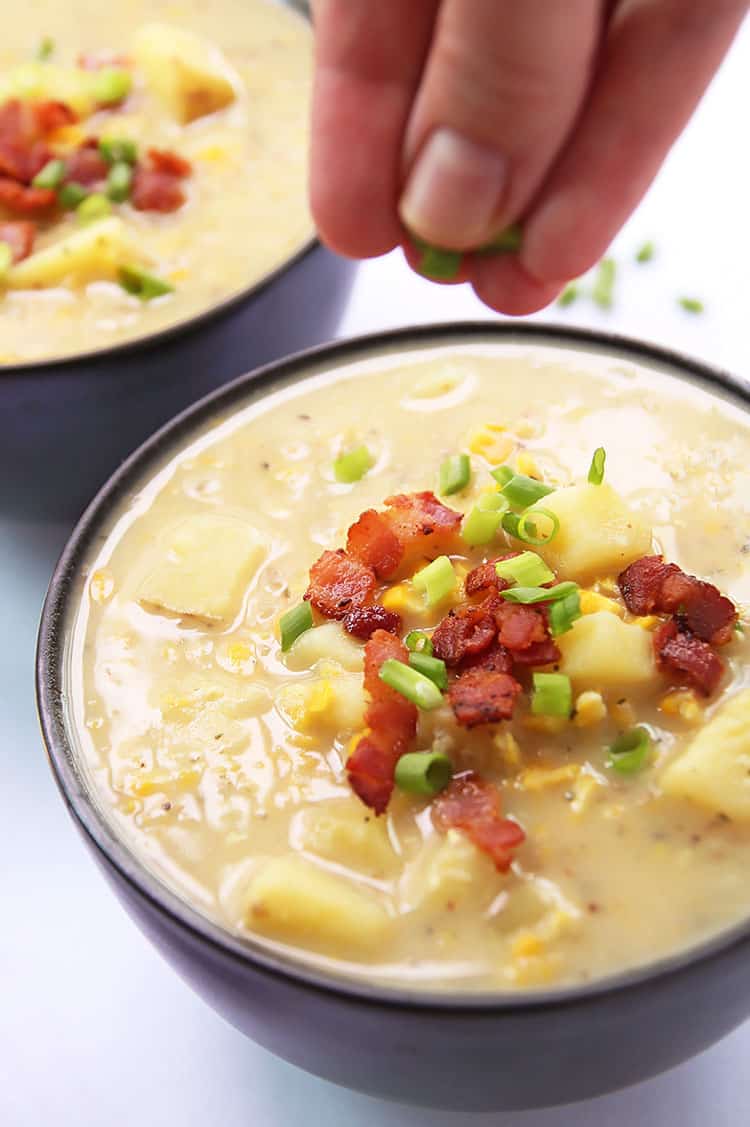 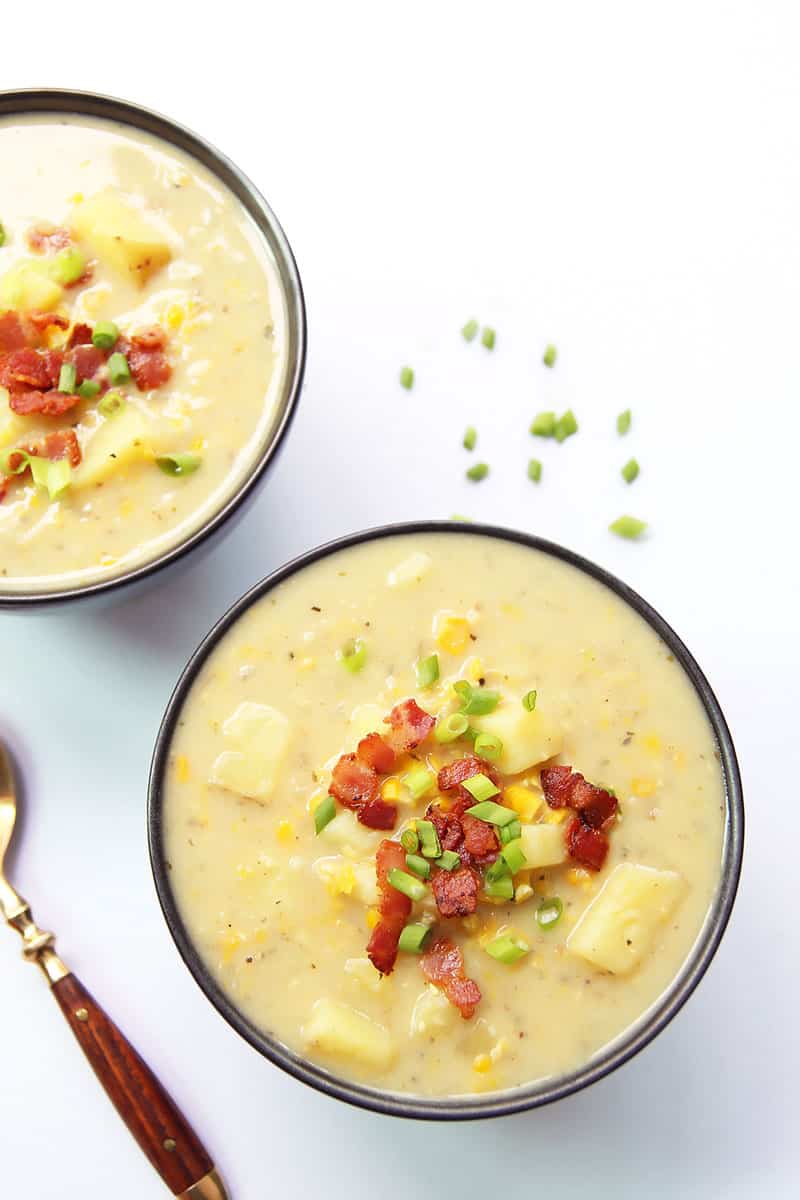 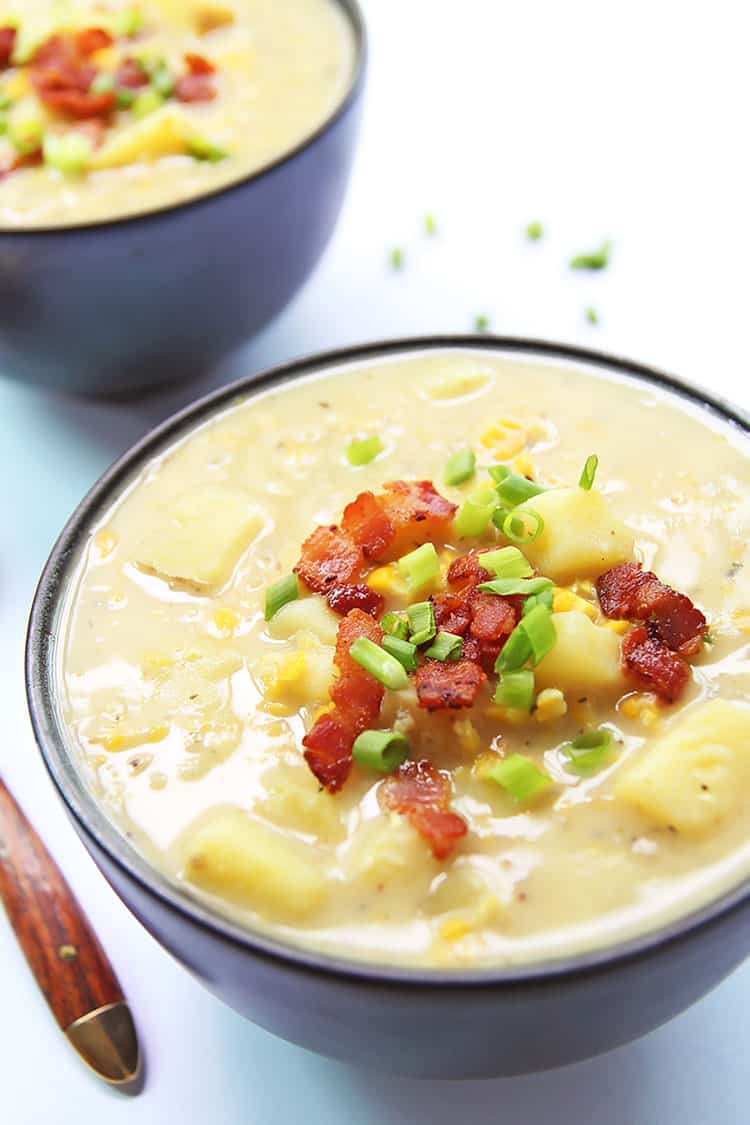 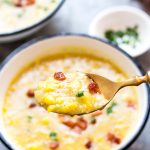 This comforting Potato Corn Chowder with Bacon is made dairy-free with the use of coconut milk. Vegan options are also included.

*To make this potato corn chowder vegan by soften the onion + garlic in vegetable oil. Omit the bacon and use vegetable broth and coconut milk.

If you love delicious soups, check out these other recipes!