This healthy spaghetti squash bolognese would make an excellent dinner for any night of the week. Spaghetti squash strands pair deliciously well with meat sauce and are a great gluten free and low carb pasta alternative. 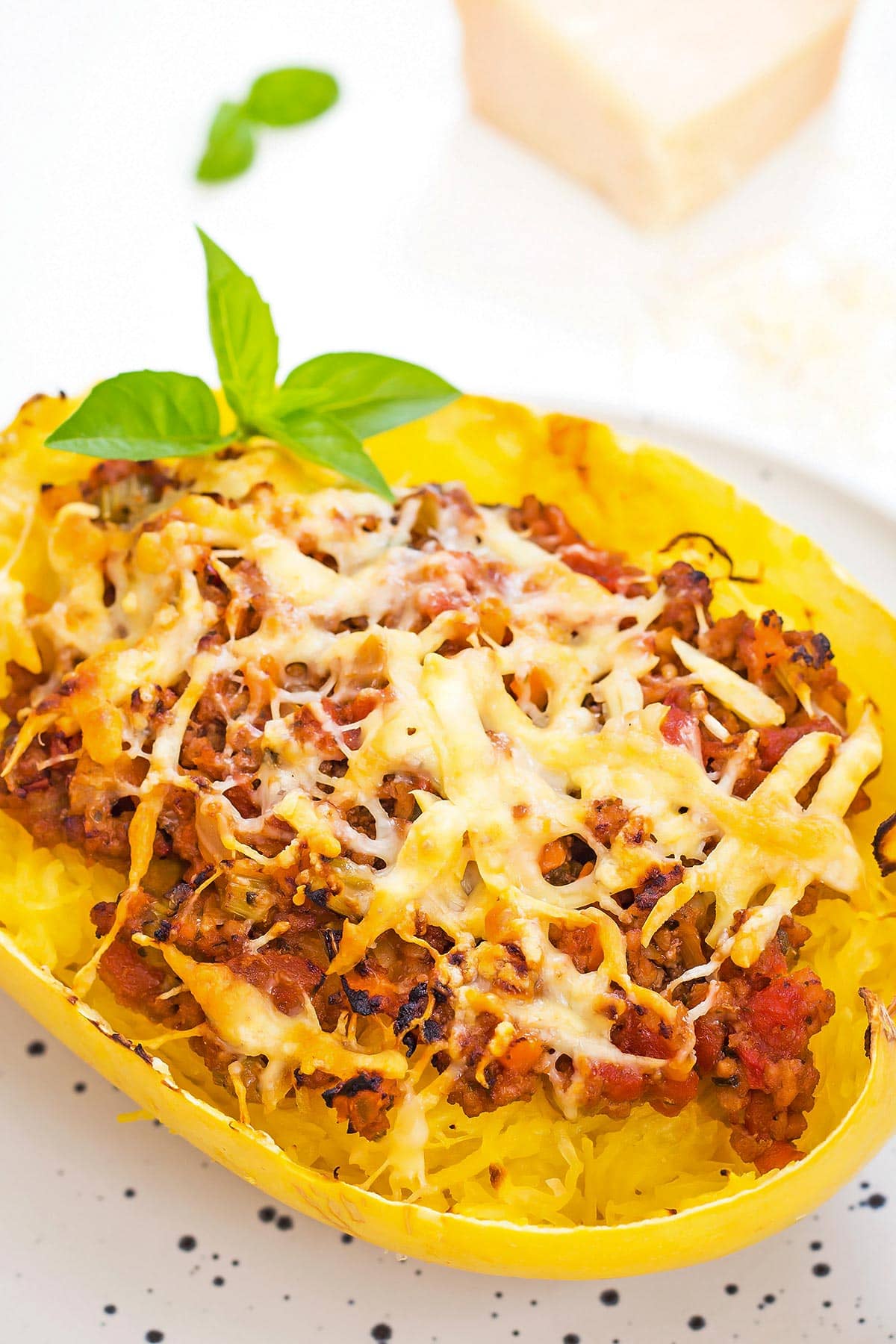 How to Cook Spaghetti Squash

I have provided two methods for you to cook spaghetti squash, so you can use whichever you prefer. The first is an Instant Pot method, which works well to produce tender squash quickly. The other is an oven version, which is great if you don't have a pressure cooker.

To make Instant Pot Spaghetti Squash, you simply poke the squash all over with a knife to promote even cooking. Then, you add 1 cup of water to your Instant Pot followed by the trivet and squash. After closing and locking the lid, you should ensure that the steam valve is in the sealing position so that it comes under pressure. The total time at high pressure should only be about 20 minutes. I called for a small squash, but if you have one that is slightly larger, feel free to use it and increase the cook time to 25 minutes instead. Afterward, cut the cooked squash in half and scoop out the seeds.

For the oven method, you can cut the squash in half and remove the seeds before rubbing with olive oil and seasoning with salt. Next, place the squash on a baking sheet with the flesh facing downward. These should roast in the oven for about 25 minutes until tender. 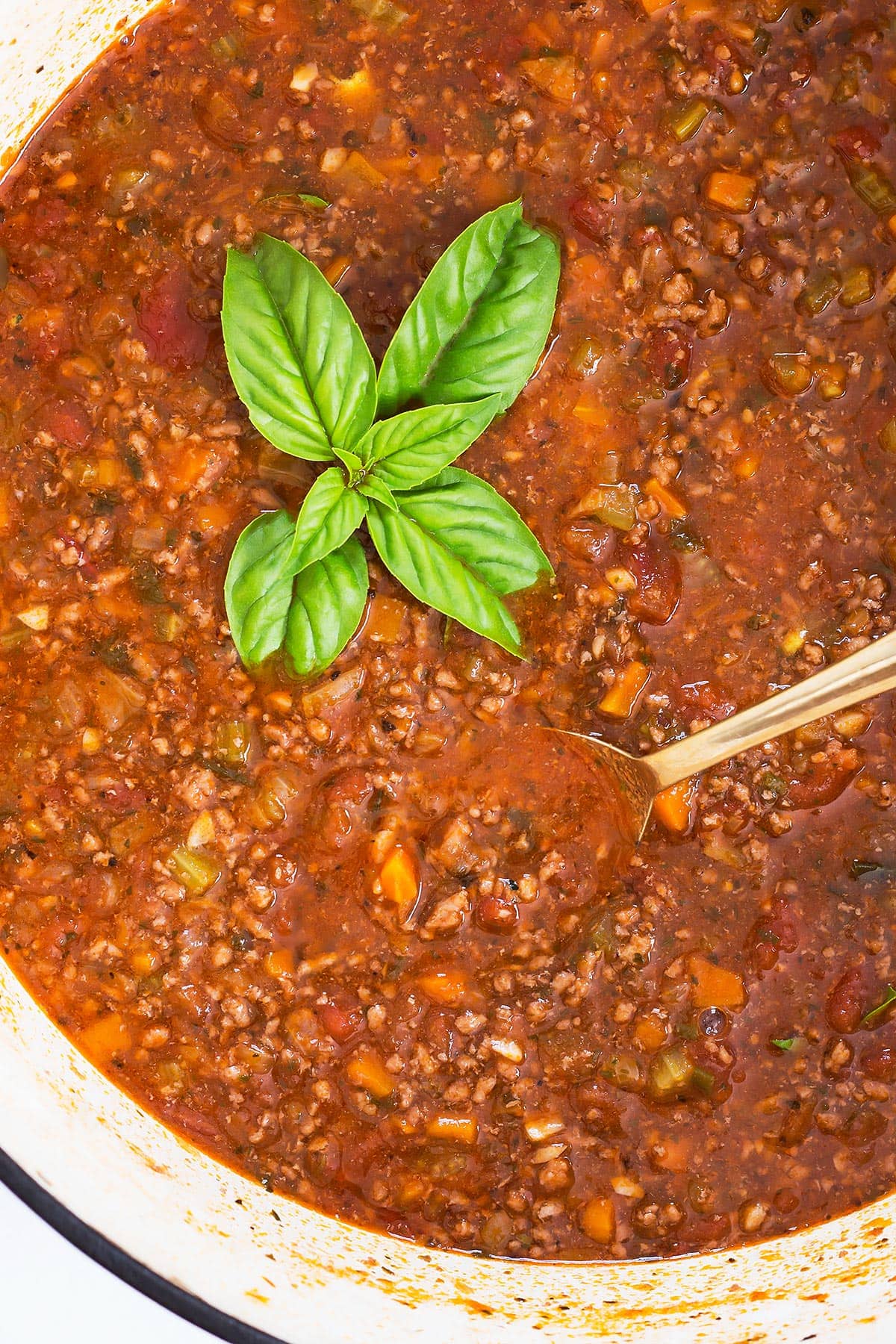 How to Make Bolognese Sauce

This bolognese sauce is so simple to make and can be used for so much more than just this spaghetti squash bolognese recipe. To start preparing it, heat the olive oil in a large pan on the stove until hot. Next, add the chopped onion and garlic, and cook them until soft and translucent. You should ensure the heat is only around medium-low or so to avoid burning the garlic as this could turn your sauce bitter.

Next, you can add some finely chopped carrot to the mixture and cook until soft. If desired, replace half of the carrot with celery instead. Afterward, you can add your choice of ground meat, and cook, while breaking it into chunks. My preference is a mixture of pork and beef, but if you would like something leaner like turkey or chicken, feel free to use that as well.

The final step is adding the tomatoes, broth, dried oregano, salt, and pepper, and simmering until thickened while stirring once in a while. You may want to season lightly with the pepper and salt at the start, as they will taste more potent as the sauce thickens and possibly reduces. You can always taste the sauce and add more salt and pepper at the end if necessary. 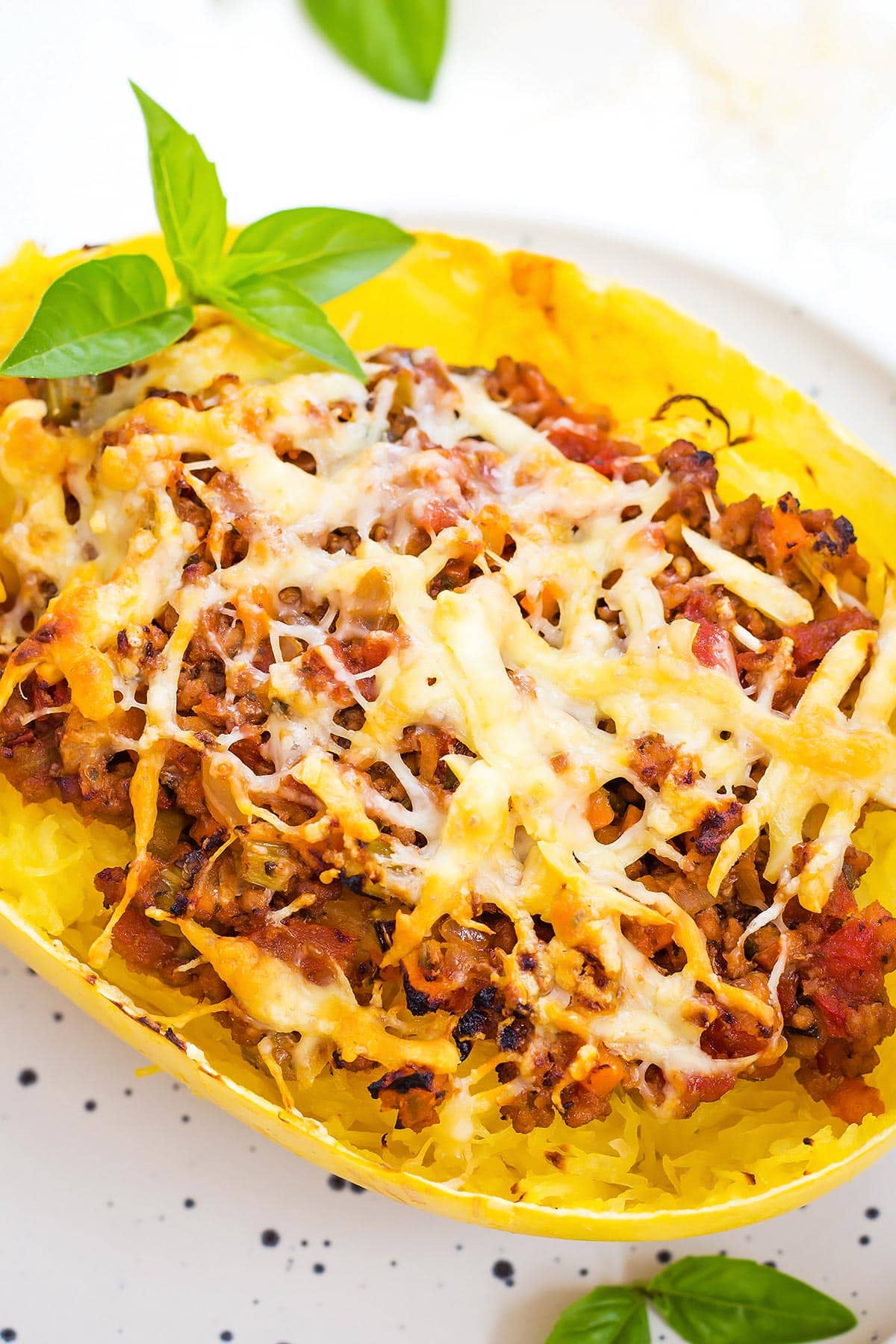 How to Assemble the Spaghetti Squash Bolognese

Serving the spaghetti squash Bolognese is the particularly fun part of this recipe because you can serve the squash as boats. Simply, shred the squash flesh inside each half to form noodles and add some of the Bolognese on top.

At this point, you can sprinkle each half with cheese and place them under the broiler. This process melts the cheese and causes it to turn golden and gooey. Feel free to eliminate the cheese if you would like to keep things dairy-free, however. Otherwise, you could substitute with your favourite dairy-free cheese. 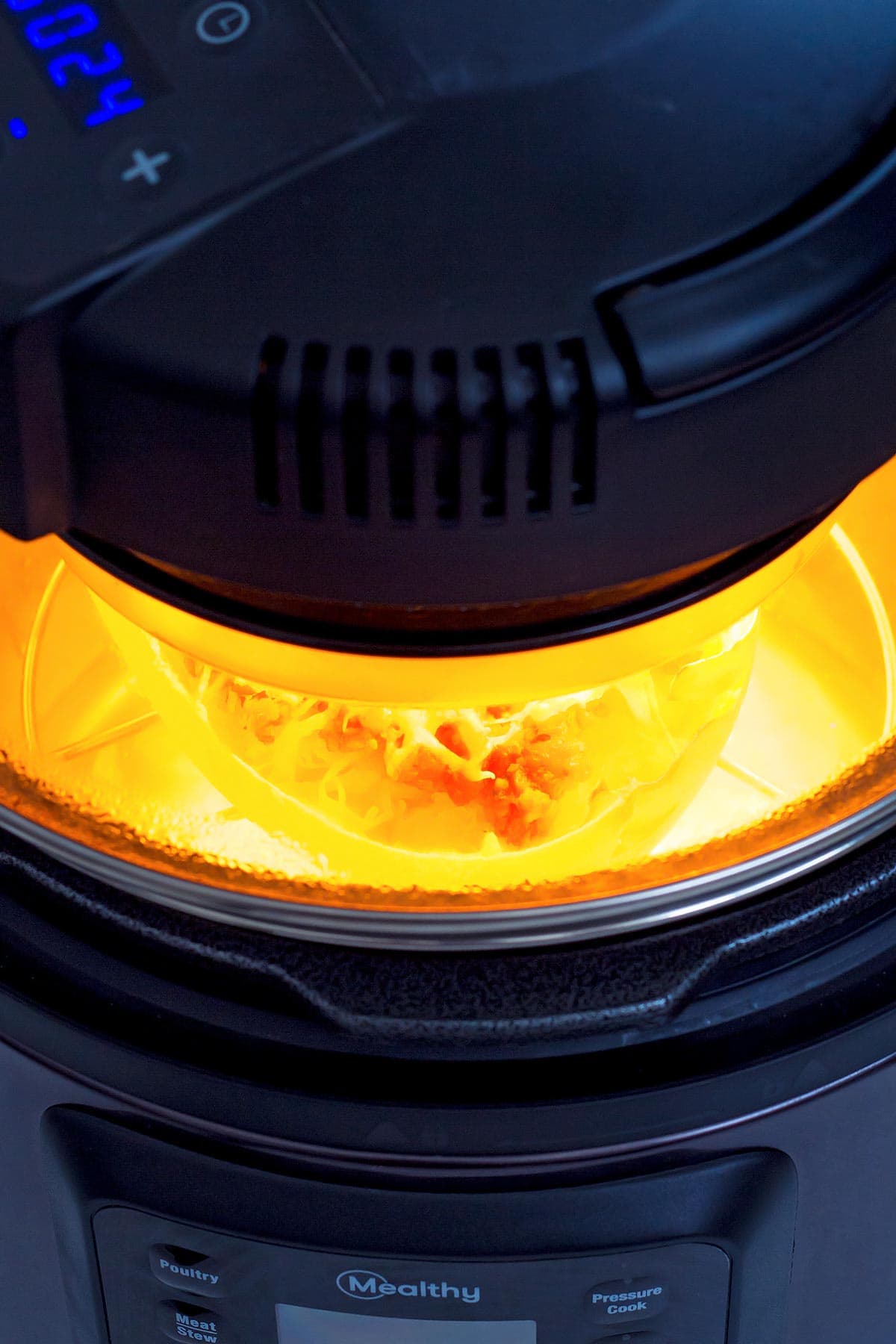 If you used the pressure cooker to cook the spaghetti squash, you may not want to turn on your oven just to melt the cheese. At least that is how I felt. So actually returned the prepared squash onto a trivet in the pressure cooker. Then I placed my air fryer lid on top and it took only about 3 minutes at 400°F to melt the cheese and turn it golden.

What to Do with Leftover Bolognese

If you are going away or don't have time to use the leftover Bolognese, you can store it in the freezer as well. In this case, you can divide it between airtight containers or sealable freezer bags once cooled. Then, you can place them in the freezer for up to three months.

To use, pull it out of the freezer and thaw it in the fridge. This can take some time, so it will be ideal to plan ahead. Otherwise, you could put it in a saucepan on the stove and gently heat it until bubbling and hot throughout. 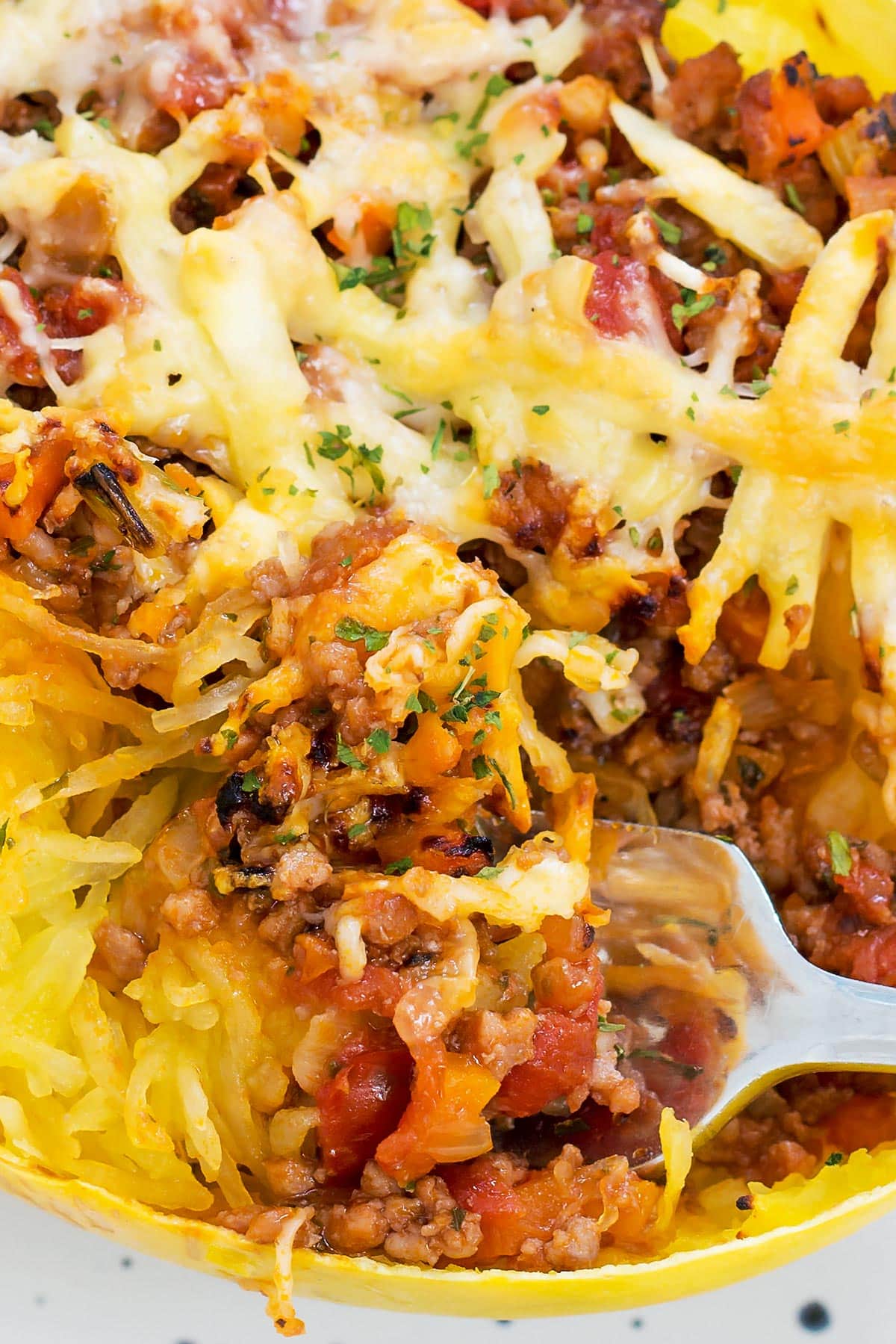 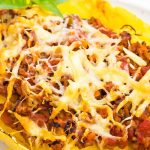 You can also easily double the sauce recipe and use a large spaghetti squash, or roast 2 small ones.