This berry peanut butter crisp is a unique take on a traditional summer dessert and PB & J! Fresh or frozen berries form the base while crispy oats and peanut butter add textural contrast. While crisp recipes often include wheat flour and butter, there are some options to make this fresh berry dessert gluten-free and vegan. 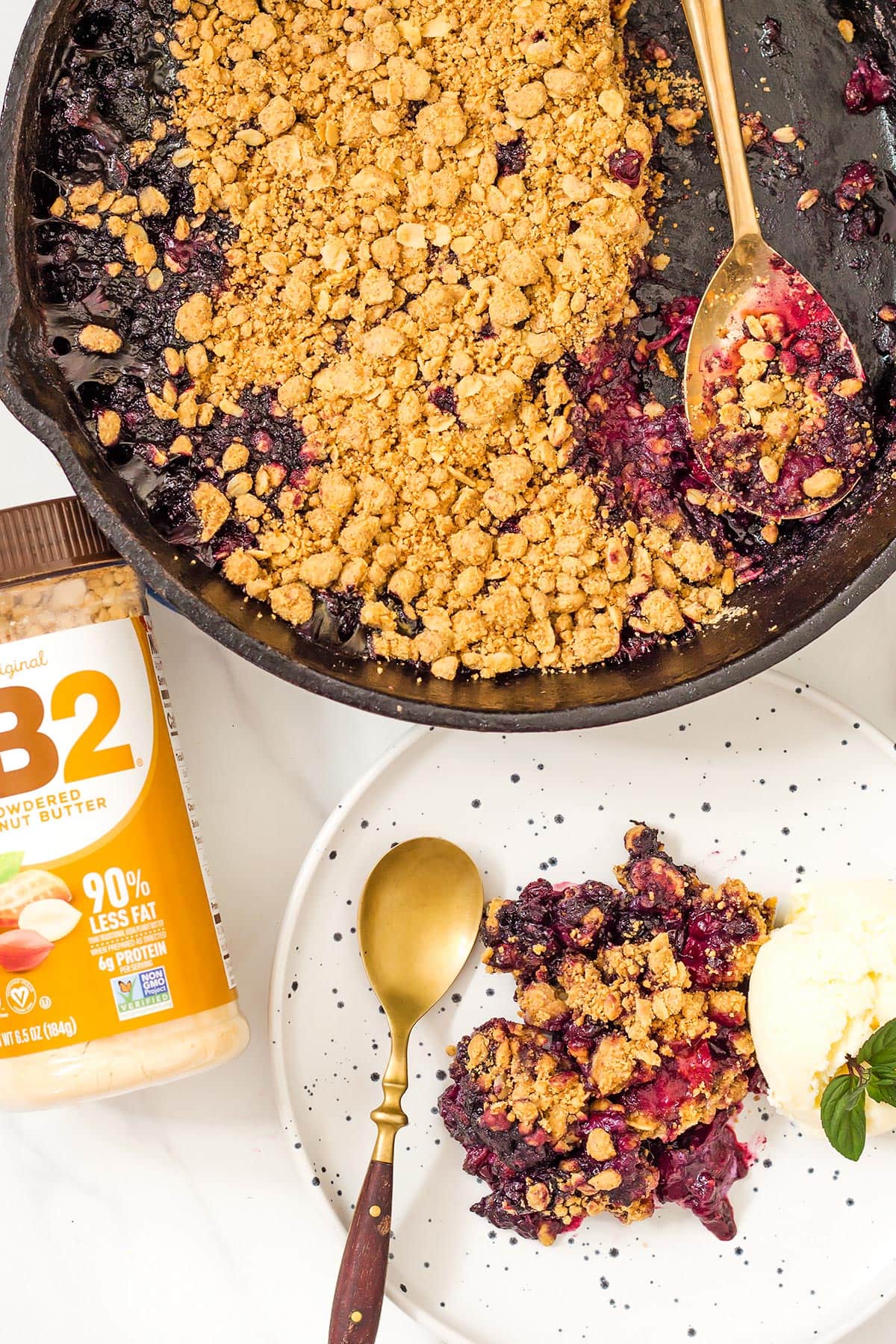 This post is brought to you by PB2 whose Original Powdered Peanut Butter makes the perfect for the crumble topping in today’s berry peanut butter crisp recipe.

PB2 Original Powdered Peanut Butter is a lower-fat peanut butter option. After roasting the peanuts, the majority of the oil is pressed out of them to reduce the amount that ends up in the finished product. This also reduces the number of calories that the peanut butter has. Other than peanuts, this product includes just a little salt and sugar to round out its taste.

Due to the few and recognizable ingredients in this peanut butter, it is suitable for both gluten-free and vegan diets. There is no flour for binding and no animal products. This powdered peanut butter is simply wholesome tasty roasted peanuts with some sugar and salt for flavour. 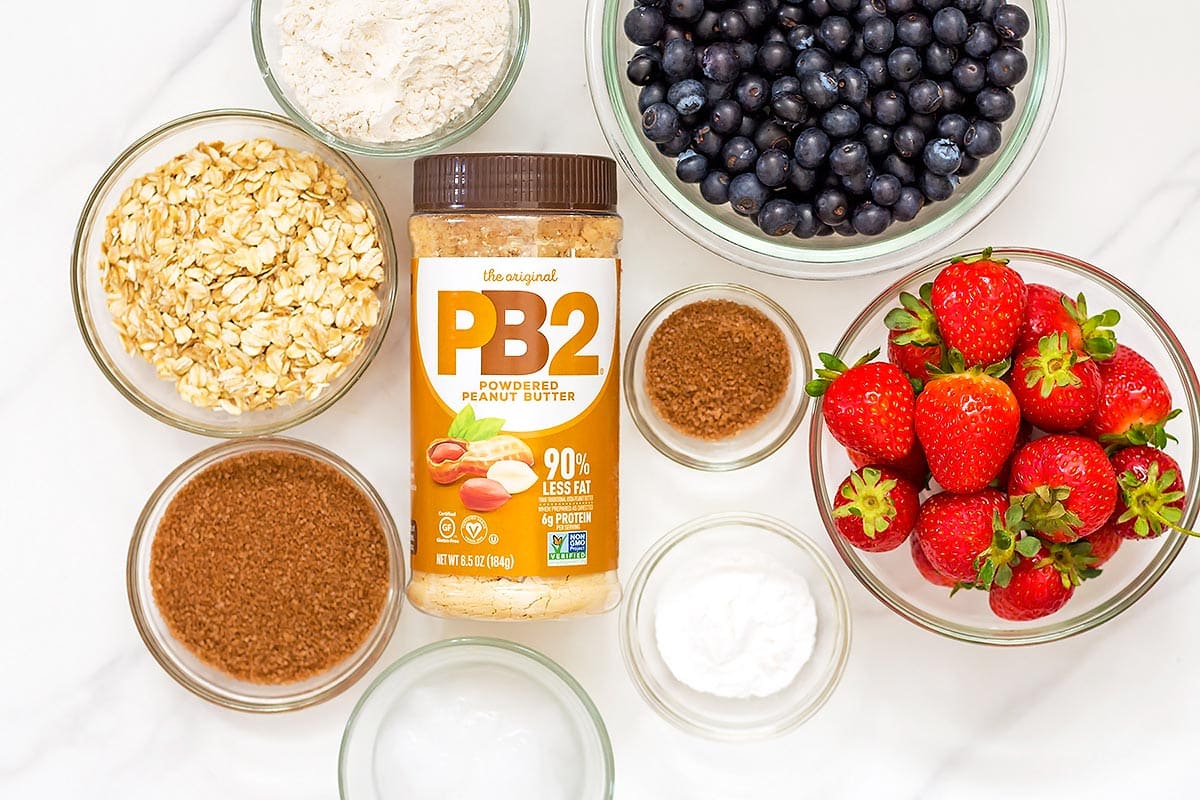 Like all crumble recipes, there are two components to making this dessert, the filling and the topping. To start making this berry peanut butter crisp, you should preheat the oven. The process of prepping this dessert is quite fast with a total time of 10 minutes, so by the time your oven is preheated, you can just pop the crisp into the oven.

Next, you should combine your choice of berries with your thickener and sweetener of choice. Rather than using a bowl, you can just mix these in the vessel you will be baking the crisp in. A cast-iron skillet gives the perfect rustic look to this berry dessert, but you can use a traditional 9 or 10-inch baking dish as well.

The versatility of this crisp is amazing in that for thickeners, you can choose either tapioca starch, cornstarch or rice flour. All three are gluten-free options that will help thicken the juices of your berry crisp filling. To add a little more sweetness to the fruit, you can use maple syrup or honey, or swap for a granulated sweetener like brown or coconut sugar. Either way, this crisp will be delicious! 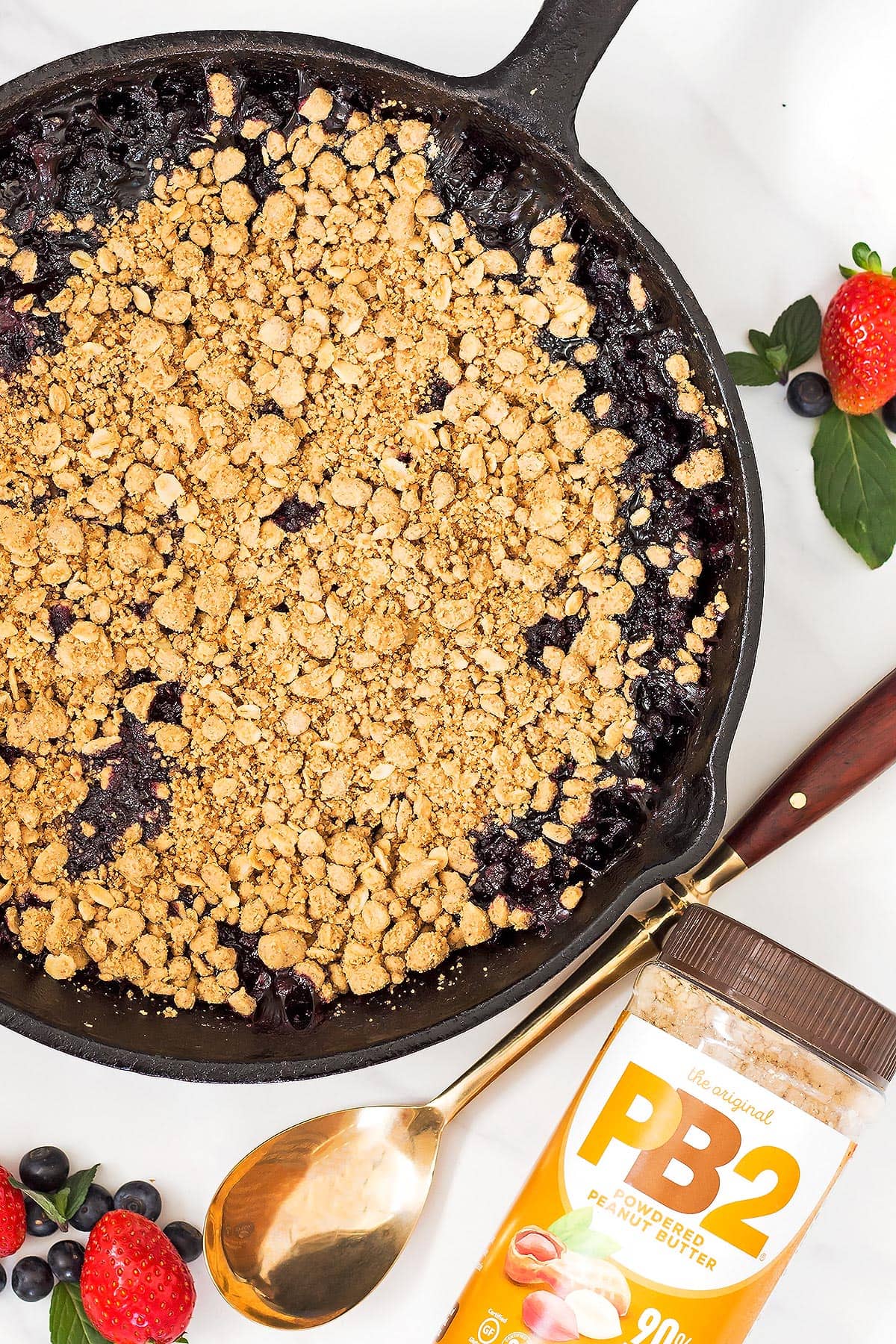 To make your crispy peanut butter topping, simply combine the PB2 Original Peanut Butter with oat flour, rolled oats, and salt. Instead of oat flour, you could also use whole wheat or almond flour. Next, add the fat (butter or coconut oil), sugar, and vanilla until a crumbly mixture is formed. This should be sprinkled evenly over the fruit before baking in the oven.

The total time to bake this berry peanut butter crisp is about 30 minutes. You are looking for a bubbling fruit mixture and crispy golden topping. It is ideal to let the crips rest a few minutes to settle before serving.

What Types of Berries Should this Crisp Use?

This peanut butter crumble recipe is a perfect dessert for any time of the year because you can use fresh or frozen berries and any type you want. In the midst of summer, you could choose from berries like fresh seasonal strawberries, raspberries, blueberries, blackberries, and more. You could even combine them to get the complexities of each flavour and a deep purplish colour to your crisp base. I used a combination of fresh strawberries and blueberries in my version.

In the middle of winter, frozen berries will work just as well, though. These are often harvested in their prime, and therefore, give good flavour to this peanut butter crumble recipe. If you freeze your own berries from summer, those will be a great option to use here as well. 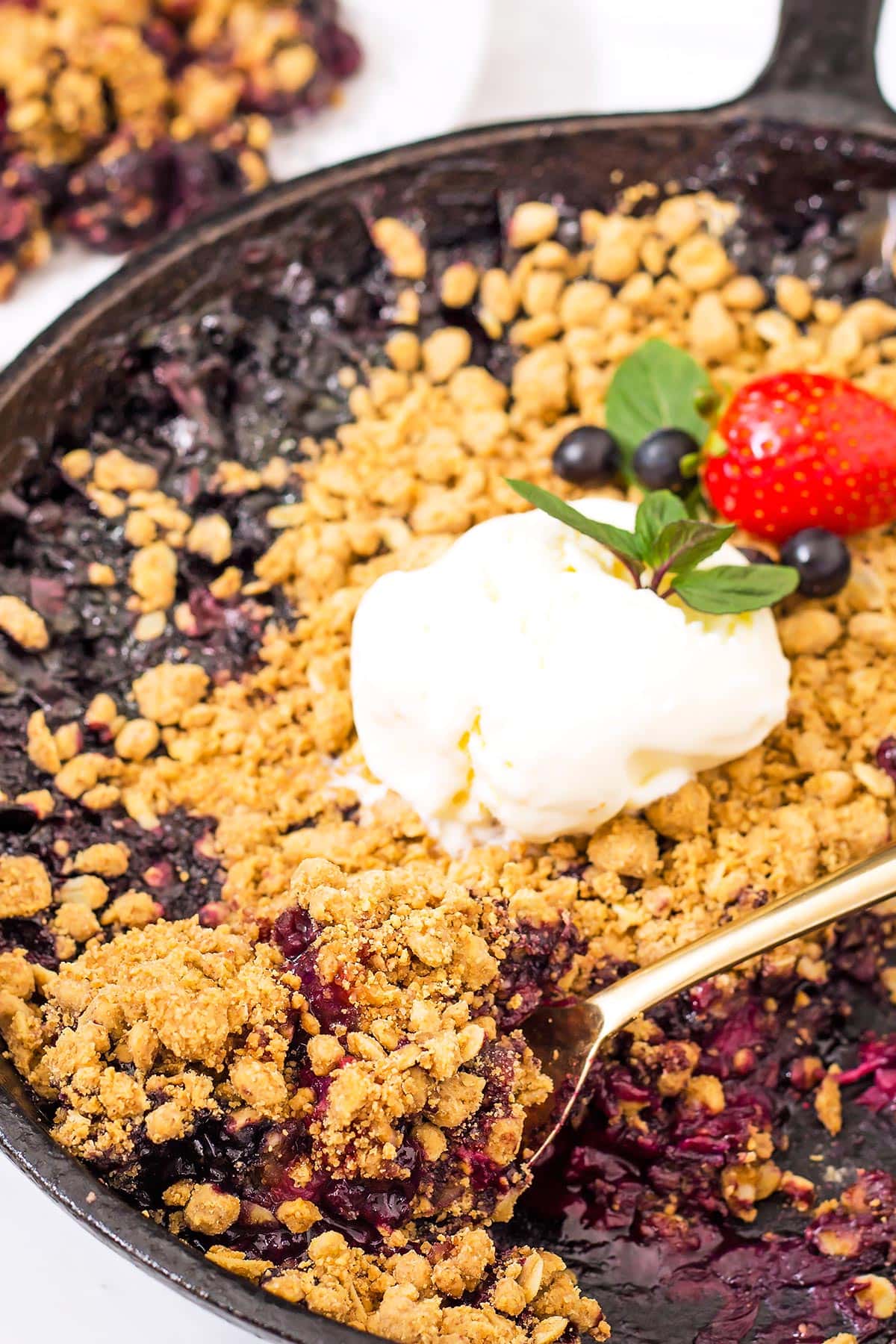 The method for using the frozen berries is slightly different in comparison to fresh. Rather than simply tossing with the tapioca and sweetener, you should combine them in a saucepan and heat them just until they thaw out and the mixture is starting to simmer. This will ensure that you have the same bake time with frozen berries as you would using fresh.

The process of thawing the frozen berries on the stove should only take about 5 minutes. You don't want to cook the berries here, you just want to remove the freezer chill so that they can cook in the oven in the same time that it takes the topping to crisp up and turn golden brown. 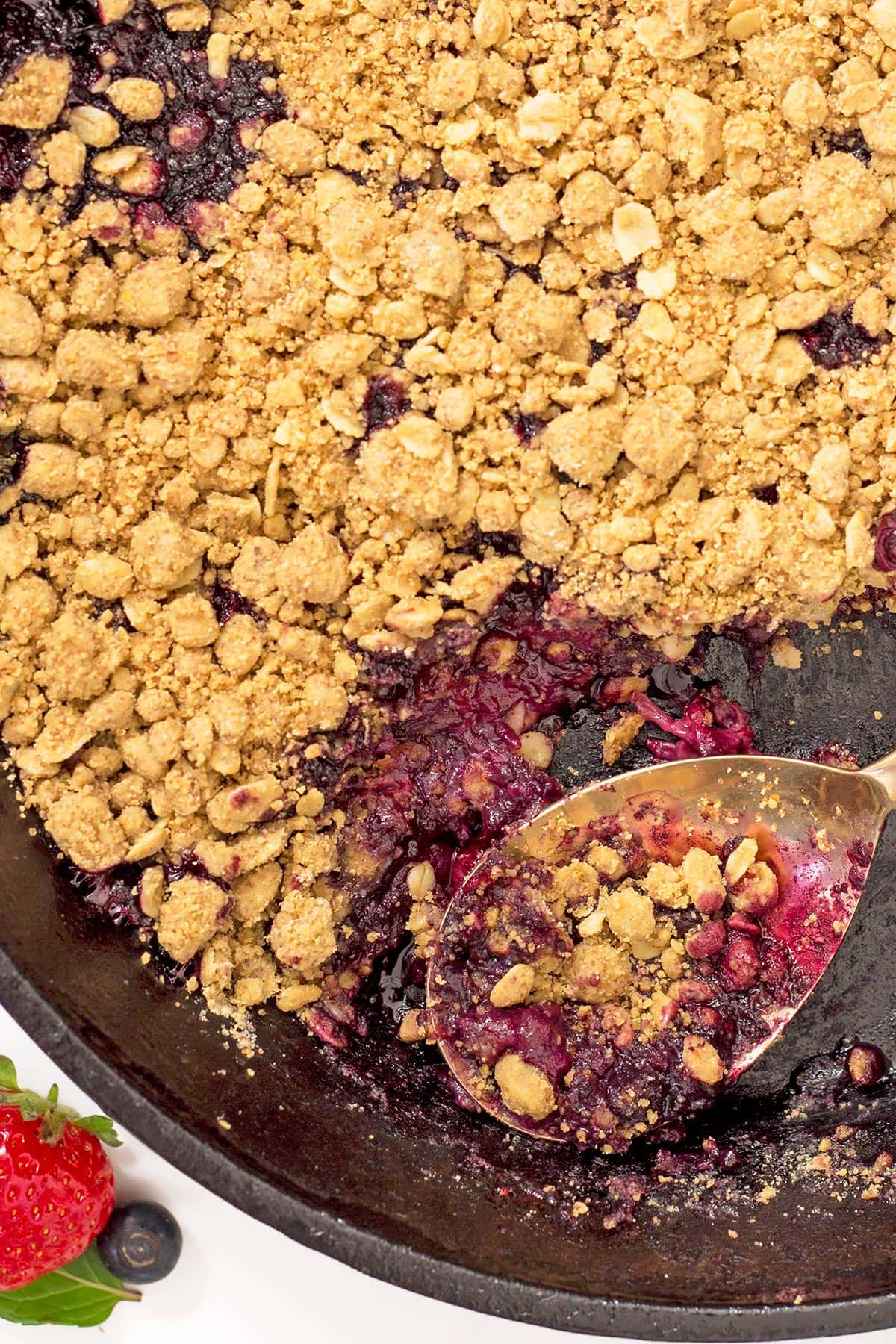 How to Serve this Peanut Butter Crumble

The way to serve fruit crisp desserts is often personal, but they should usually be served while still warm from the oven. As for toppings, this berry peanut butter crumble is particularly good with a scoop of ice cream. Regular dairy or dairy-free ice cream will work perfectly here!

If desired, you could even have some whipped cream with it instead. Freshly whipped cream flavoured with a little sweetener and vanilla is a great contrast to the berries and peanut butter in this dish. Coconut cream works well for a dairy-free option as well. 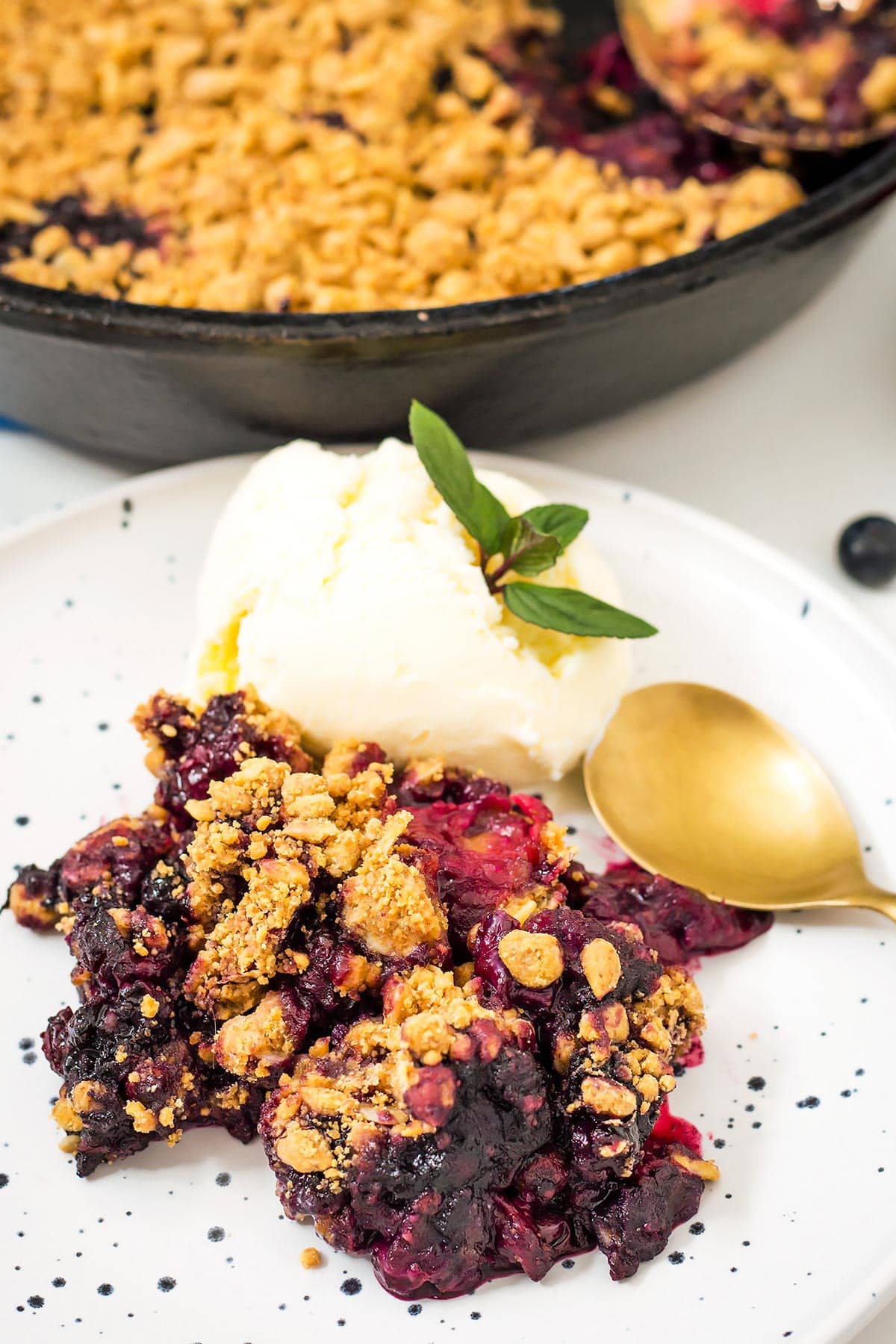 If you happen to have some leftovers of this peanut butter crisp, simply allow it to cool, cover tightly, and refrigerate. Due to the nature of this dessert, I wouldn't keep it longer than 3 days, though.

To serve again, you could either rewarm it in the microwave or the oven. The crisp topping may soften up during storage, and as a result, oven warming may be the best option. It could help to re-crisp the topping slightly. Warming in a microwave is perfect if you need a faster result, though.

I've also enjoyed leftovers for breakfast alongside thick Greek yogurt. It's like a shortcut to a yogurt parfait. The leftover berry crisp makes up the fresh fruit & granola part of a parfait. All it needs is the addition of yogurt and breakfast is served! 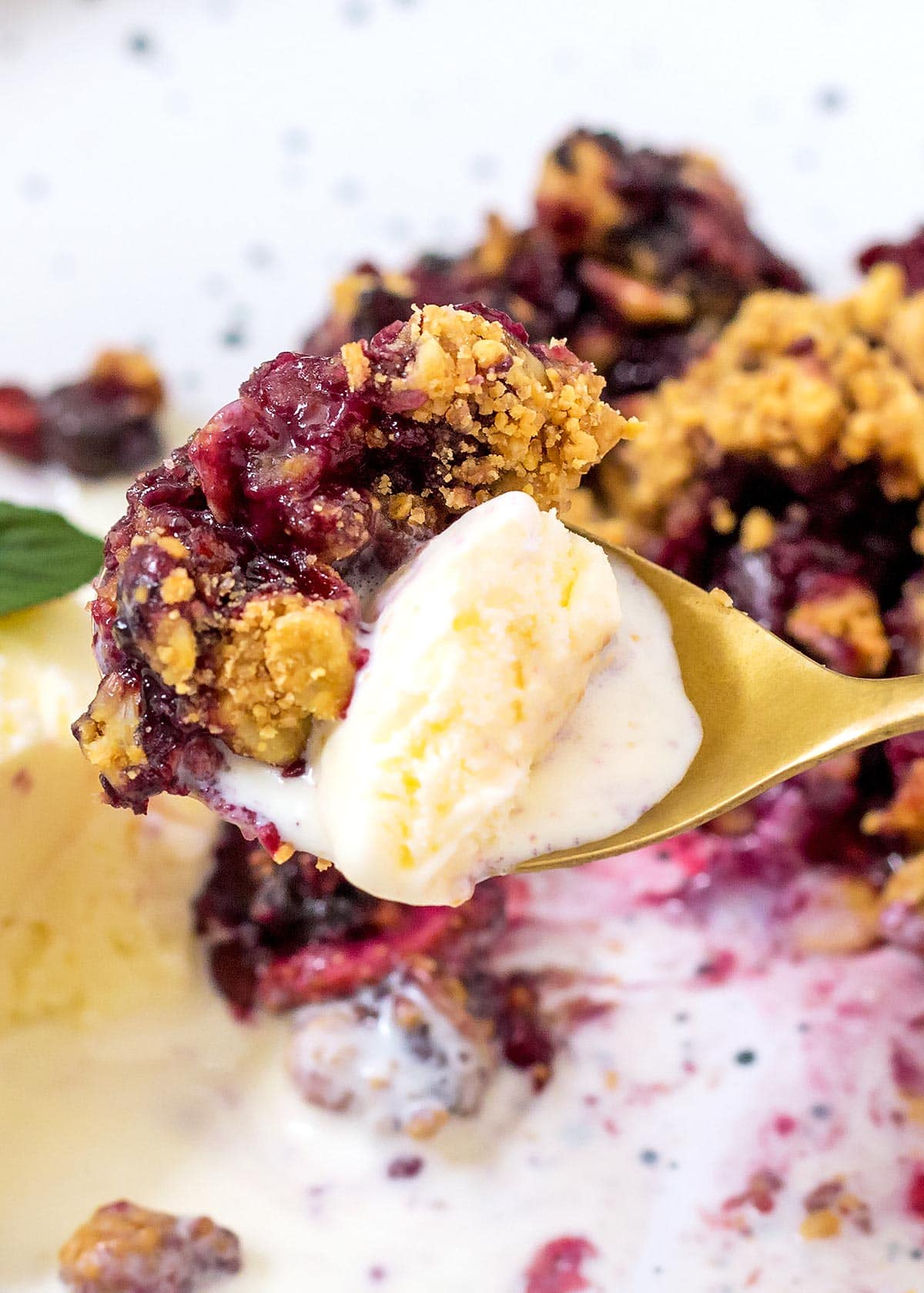 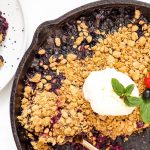 This berry peanut butter crisp is a unique take on a traditional summer dessert and PB & J! Fresh or frozen berries form the base while crispy oats and peanut butter add textural contrast. While crisp recipes often include wheat flour and butter, there are some options to make this fresh berry dessert gluten-free and vegan.

*when using frozen berries, add them first to a saucepan together with the tapioca flour and sweetener. Then heat gently until the berries are defrosted and are starting to simmer (about 5 minutes)