This pear frangipane tart includes a fluffy almond mixture that puffs when baked and pairs beautifully with the pear slices embedded on top. While you certainly could use a classic pie crust to hold the amaretto-infused almond filling, making a coconut flour crust would be an excellent way of turning this tart into a gluten free dessert. 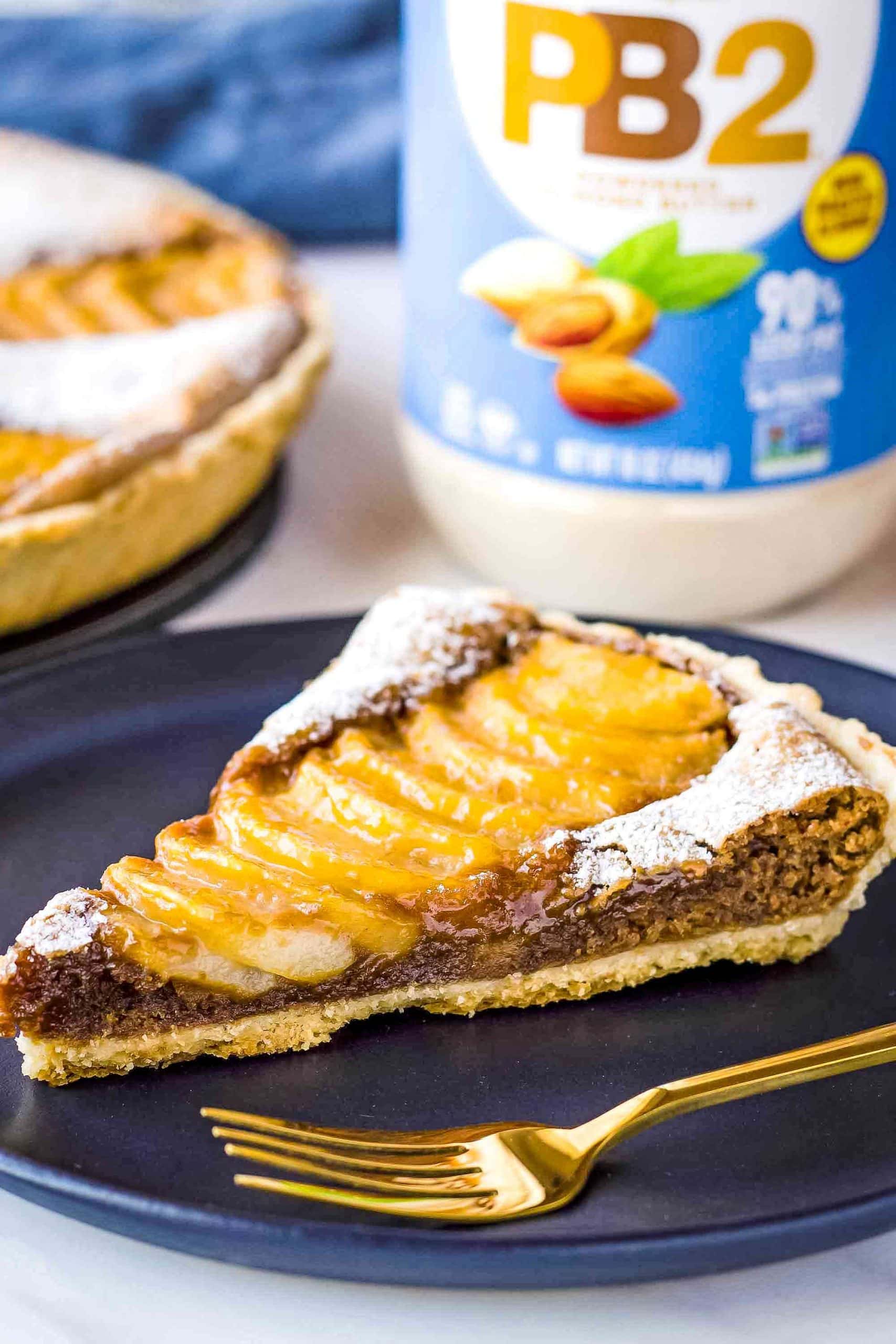 This post is brought to you by PB2 whose Powdered Almond Butter gives the filling of this Pear Frangipane Tart its amazing roasted almond flavour.

PB2 makes its powdered almond butter by roasting almonds and then pressing most of the oil out of them, before grinding them into a fine powder. The ingredient list for this almond butter is very simple, considering that it includes just ground almonds, sugar, and salt. Sugar and salt are present for flavour.

Besides being healthy, high protein, and lower in fat than other almond butter, it is also incredibly versatile in the kitchen. In fact, since it is powdered in nature, you can use it as flour in gluten-free baking. Additionally, it is easy to blend into smoothies for added protein. You can also rehydrate it with a little water to turn it into a more traditional, spreadable nut butter. 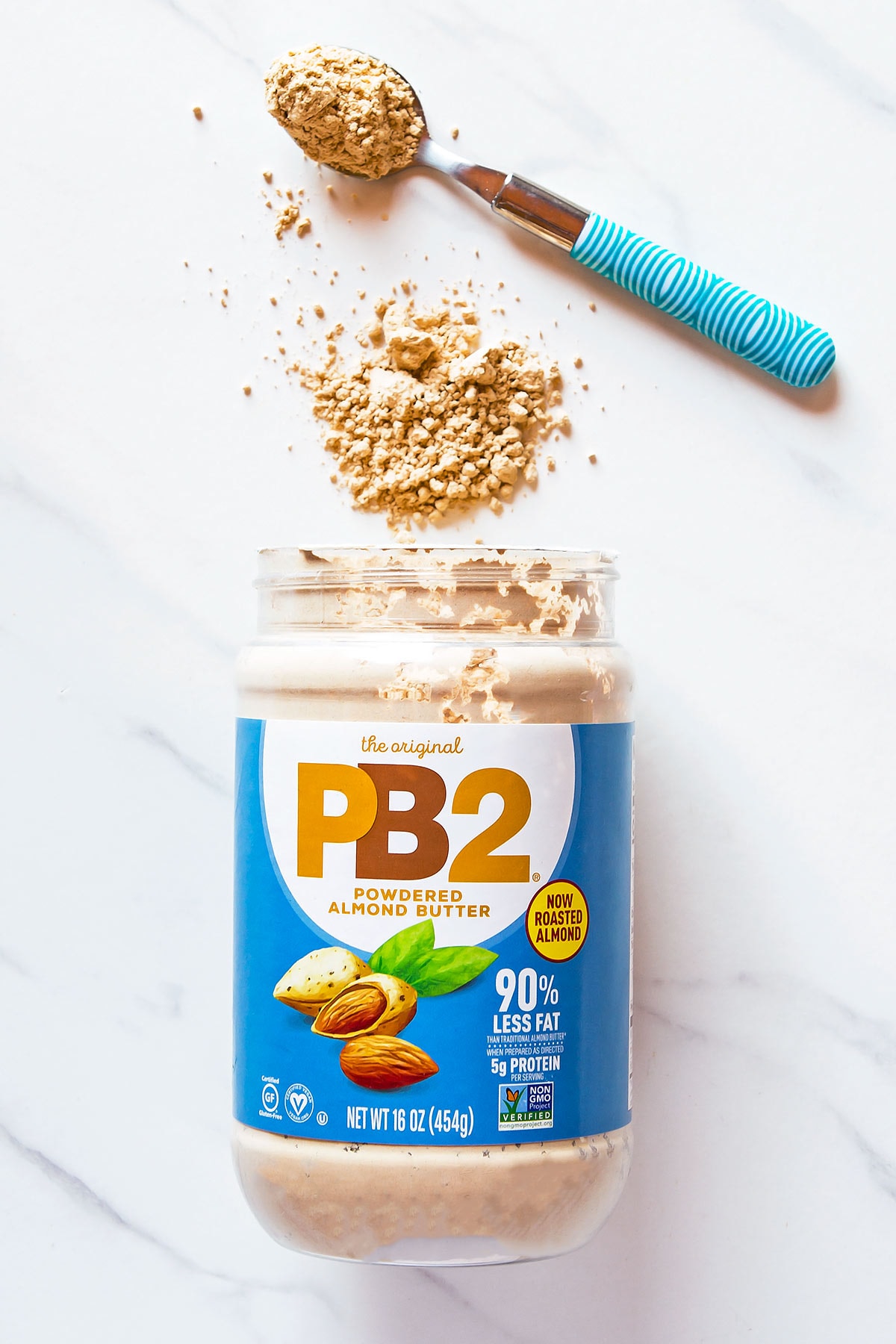 About this Pear Frangipane Tart

This pear tart begins with a pie crust. If you have a dough recipe or even a store-bought crust you already love, feel free to use that. I like to use either my Coconut Flour Pie Crust for a gluten-free tart crust or my Flaky Butter Pie Crust as a more traditional choice for tart dough. Both versions will give you a flaky crust that is sturdy enough to hold the frangipane. You can also make them in a food processor for convenience if you like.

Once you have prepared your tart dough, you can roll it out and fit it into a 10-inch tart pan, preferably a tart pan with removable bottom. You can purchase a tart pan with a removable bottom from a trusted store online or a specialty bakeware shop. The tart crust should be blind-baked (with weights) for 15 minutes at either 400°F or 350°F depending on the type of crust you decided to use. The lower temperature is preferable for the coconut flour crust as it can burn easily at higher temperatures. After you remove the weights, the crust should bake for another 5 to 10 minutes until golden and baked through. 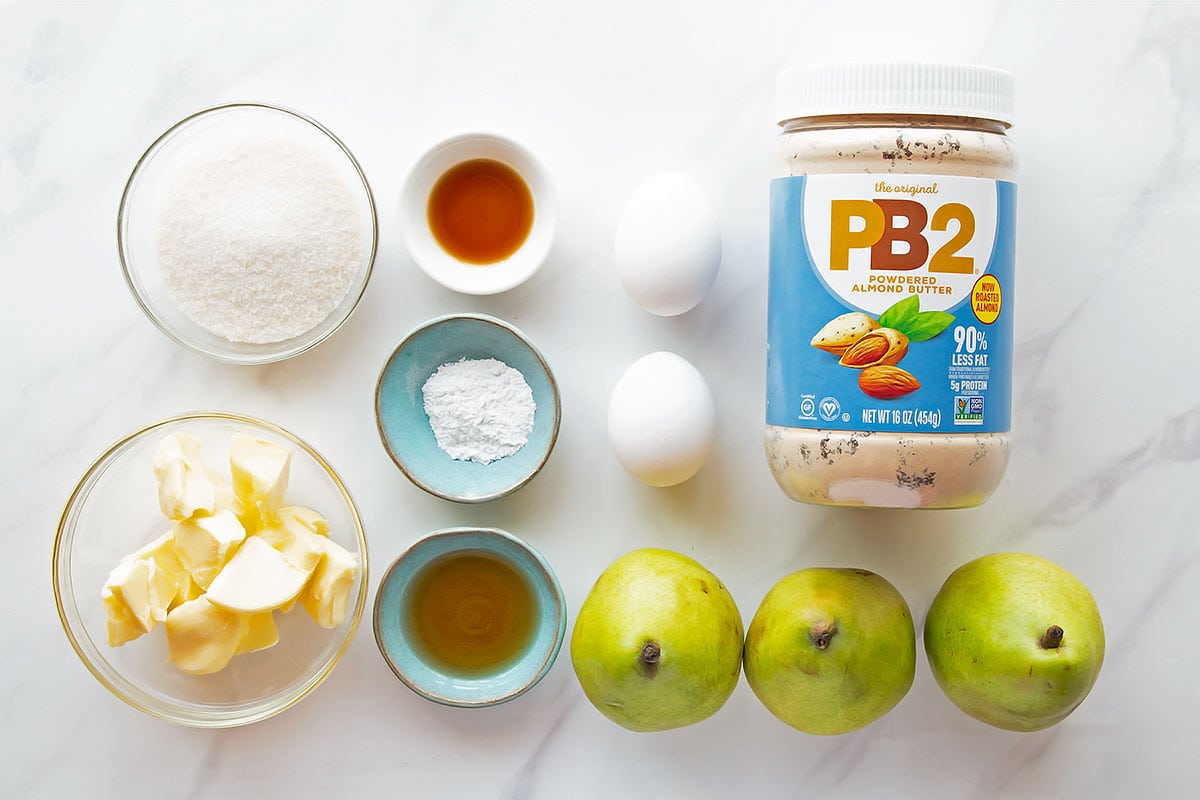 How to Blind-Bake a Crust

Blind-baking is a method to prevent the pie crust from shrinking on the sides and puffing up from the bottom. To bake the crust, you should line the inside of the tart with a sheet of parchment paper that hangs over the edges of the crust. You will need to be able to grab onto the edges to lift the weights out after baking. The parchment paper will mold itself to the pie shape easier if it is crumbled up first.

Next, you can fill the parchment paper with either traditional pie weights if you have them. Otherwise use pantry items like dried beans or lentils, rice, or granulated sugar to weigh down the crust for the first 15 minutes of baking. Once the crust has partially baked, you can lift out the weights with the parchment paper and bake the crust for another 5 to 10 minutes until it is golden brown, and no longer opaque and has a crisp texture. 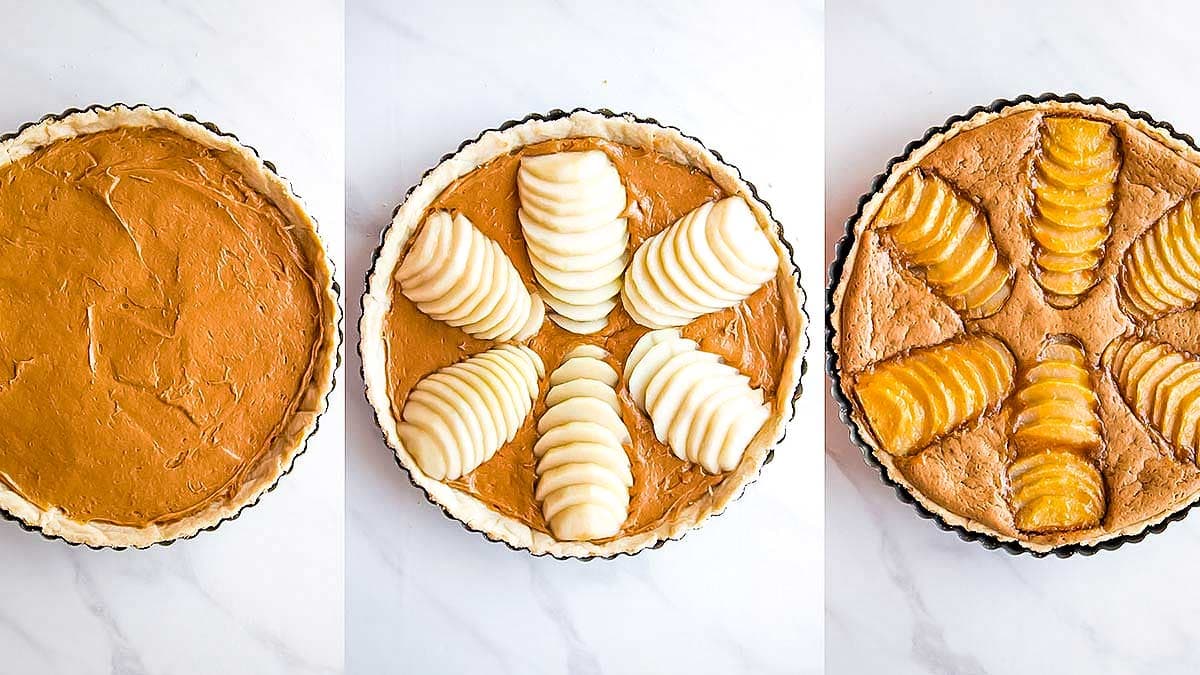 Frangipane, also called almond cream, is an Italian pastry cream. It is based on traditional butter, sugar, and egg custard that is flavored with almonds – either in the form of ground whole almonds or almond meal. This recipe uses PB2 almond powder which gives the tart a rich, nutty, roasted almond flavor.

To make the frangipane, you start off by whipping butter with sugar until fluffy and creamy. Next, you beat in one of the eggs followed by half of the PB2 powdered almond butter until smooth before repeating with the remaining egg and almond butter. Afterward, you beat in the baking powder and flavourings which include amaretto and vanilla. Amaretto is a lovely liquor with an almond taste that makes a great addition to the frangipane filling. However, if you don’t have any available to you or would prefer not to use it, you can replace it with some almond extract instead.

This creamy frangipane gets added into the baked pie crust and spread into a smooth and even layer. However, it can also be refrigerated for 2 to 3 days if you aren’t prepared to use it yet. 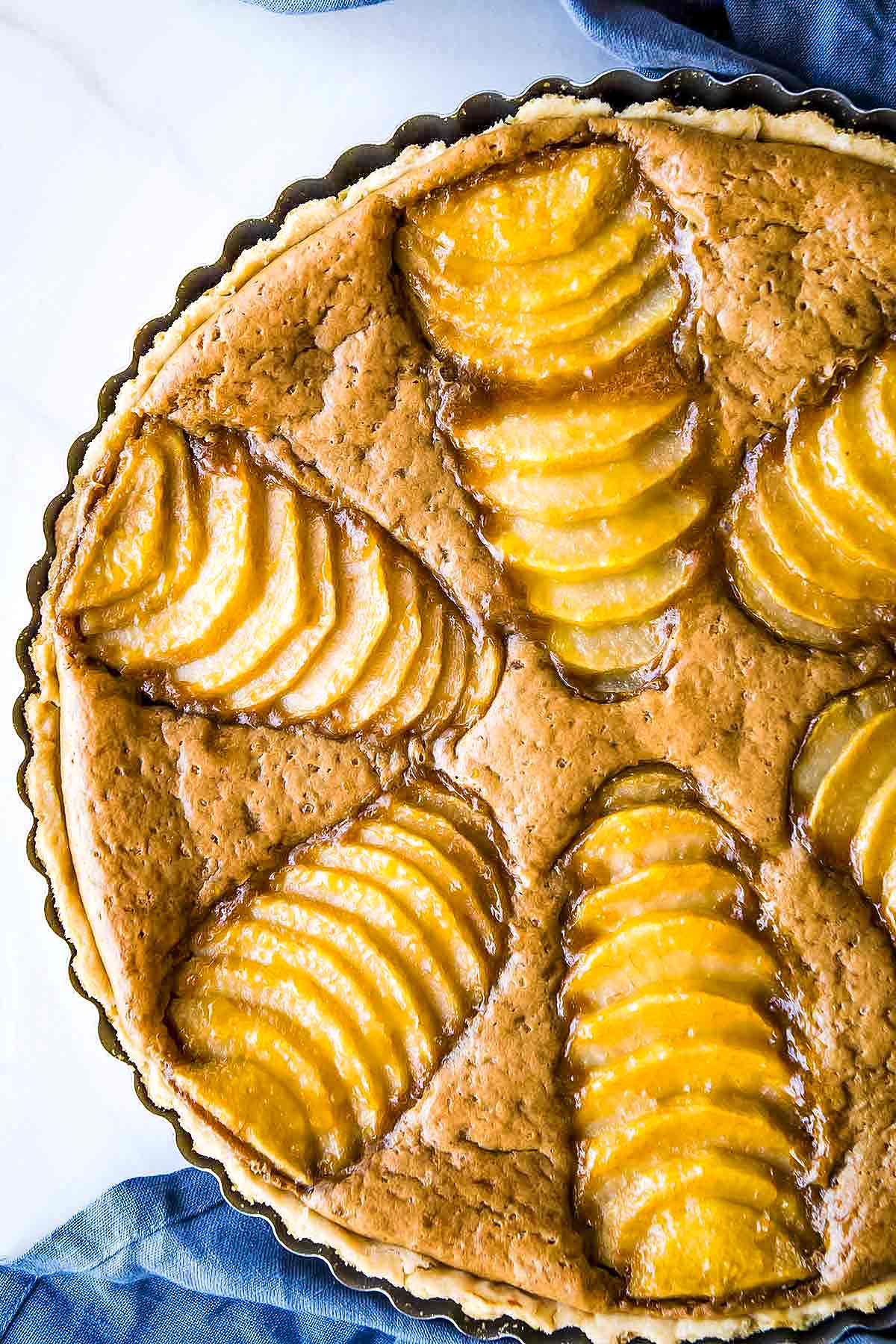 For the pear topping, I recommend using ripe d’Anjou or Bartlett pears. Start by peeling them before removing the stem and coring them with a melon baller or a paring knife. Next, slice each pear half into 1/8-inch slices. Gently fan out the slices and place the pear halves on top of the frangipane. Push the pears into the frangipane a little to ensure they stay in place.

You should bake the tart at 350°F, which is a suitable gentle heat to bake the frangipane filling. During baking, the frangipane will puff up around the fruit and become somewhat set. The total baking time will be between 30 and 40 minutes depending on your oven. 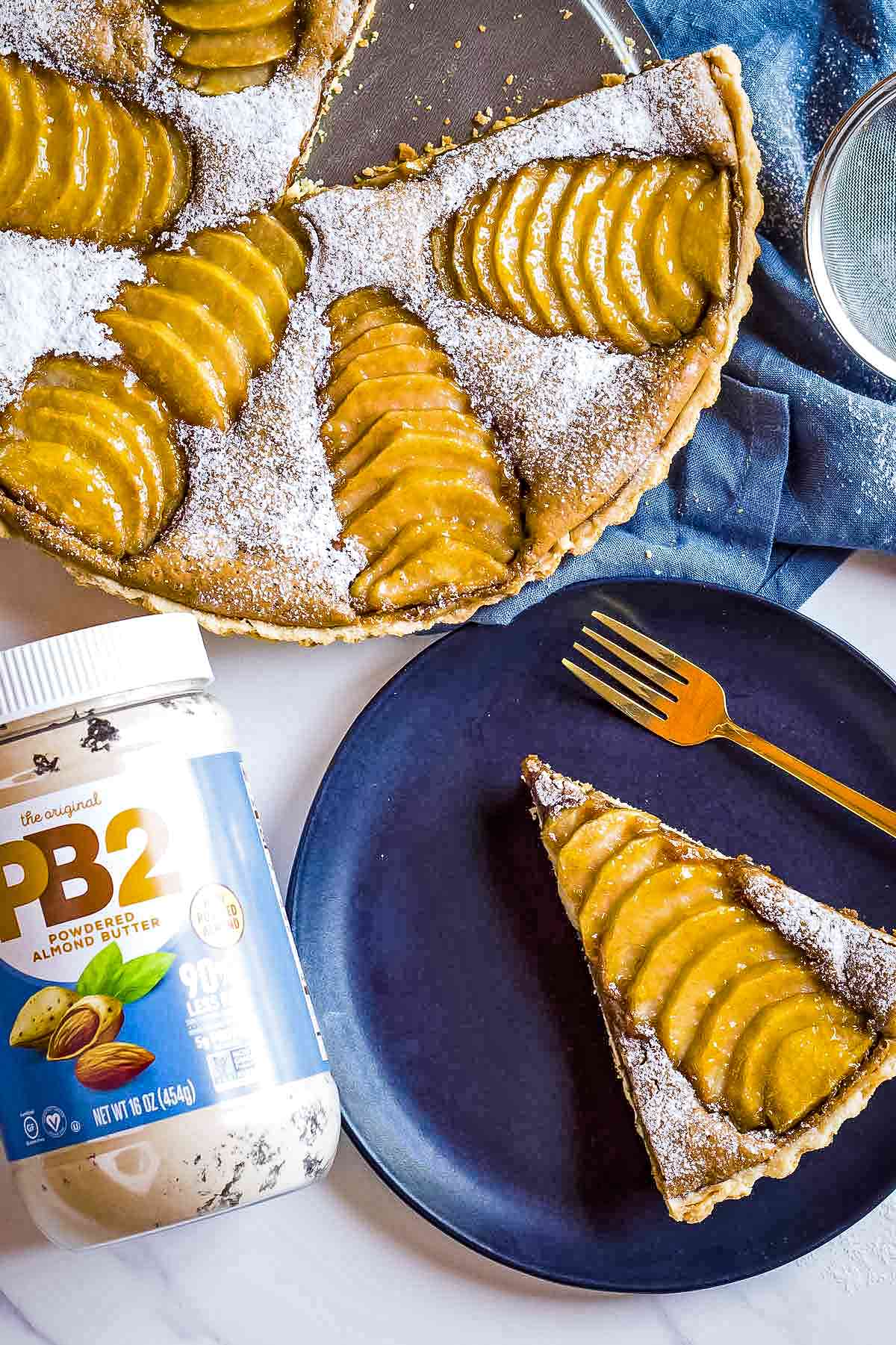 Optionally, you can warm some apricot jam to brush over the hot pears as the tart comes out of the oven. This will give the sliced pear a shiny glaze finish. Allow the tart to cool for at least 30 minutes before cutting into slices. Better yet, let it come all the way to room temperature. Then dust with a little icing sugar just before serving.

If you like, you may also dollop the room temperature tart with a little whipped cream or coconut cream. Consider adding a little maple syrup or honey to the cream for sweetening and some warming cinnamon for another dimension. You could even spike the cream with a little amaretto for yet some more almond flavour.

This 10 inch tart should serve 8 people. Store any leftovers covered in the refrigerator for up to 5 days. 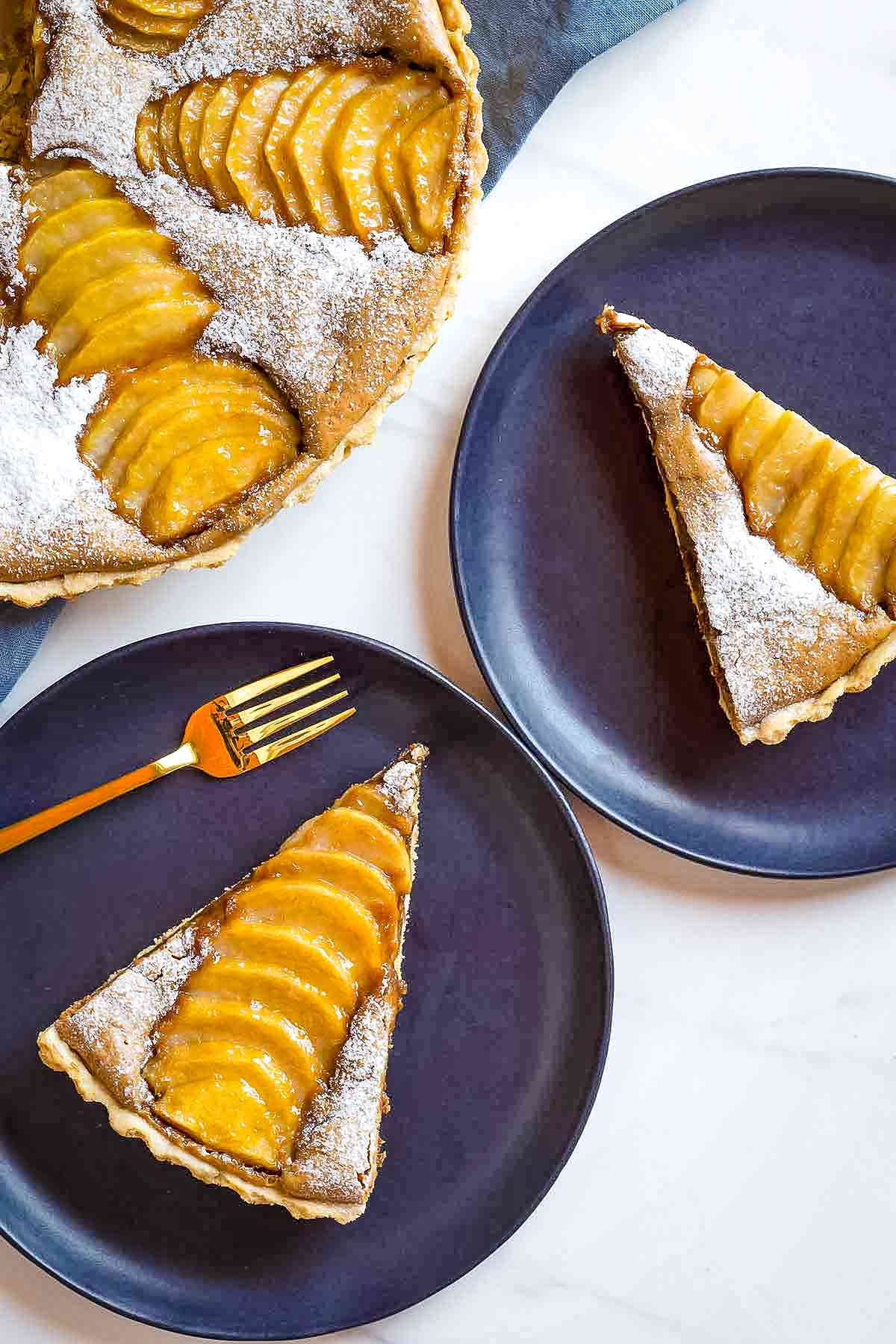 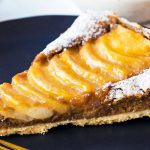 This pear frangipane tart includes a fluffy almond mixture that puffs when baked and pairs beautifully with the pear slices embedded on top.