This gluten free chocolate pie crust is made from coconut flour and cocoa powder, resulting in a chocolate base for all your favourite fillings. It is the perfect low carb pastry to serve all of your vegan, keto, or gluten-intolerant friends and family. 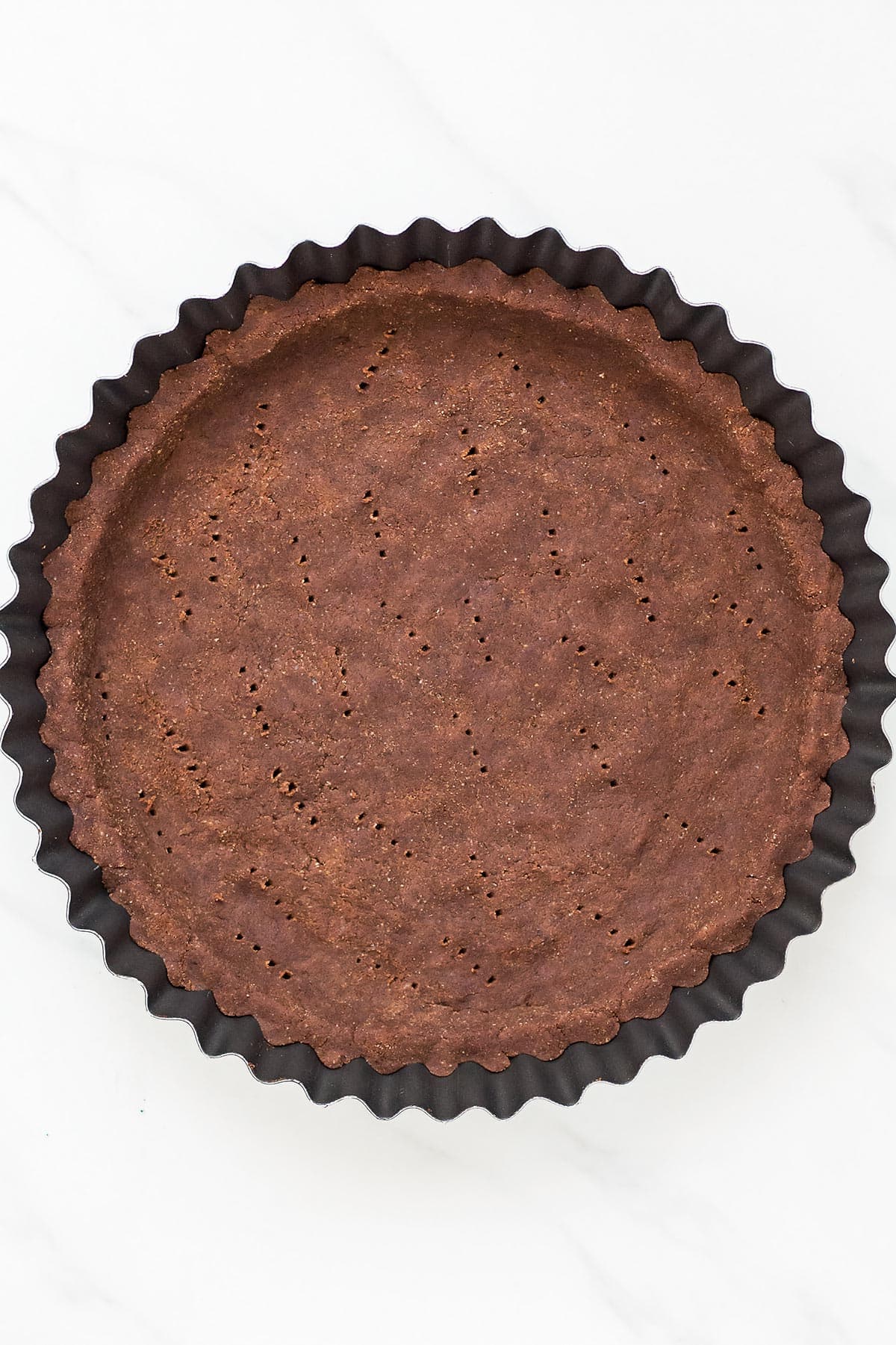 While one might think that making gluten free crust is a challenge compared to regular pie crust, it really isn't. The primary difference between regular and gluten free versions is the ingredients you use. Otherwise, the process is nearly the same.

To start, you need to make a flax egg, which is simply a mixture of ground flaxseed (flax meal) and water. The flax meal absorbs the water creating a gel the consistency of egg white. This is a wonderful component to add to many vegan desserts where regular eggs won't work.

Next, you whisk your dry ingredients together, including the coconut flour, cocoa powder, sweetener, and salt. Then, you stir in the flax egg with the coconut oil, and vanilla. Cocoa powder is a perfect gluten free chocolate component adding chocolatey depth to the pastry.

If you aren't a fan of rolling out pie dough, you will love the next part which involves crumbling and pressing the mixture into a pie pan. For a neater finish, though, you can refrigerate the gluten free dough to set it before rolling it out into a uniform disk between parchment paper sheets.

Then you just bake it for 15 minutes. After baking let the crust cool before adding any fillings. 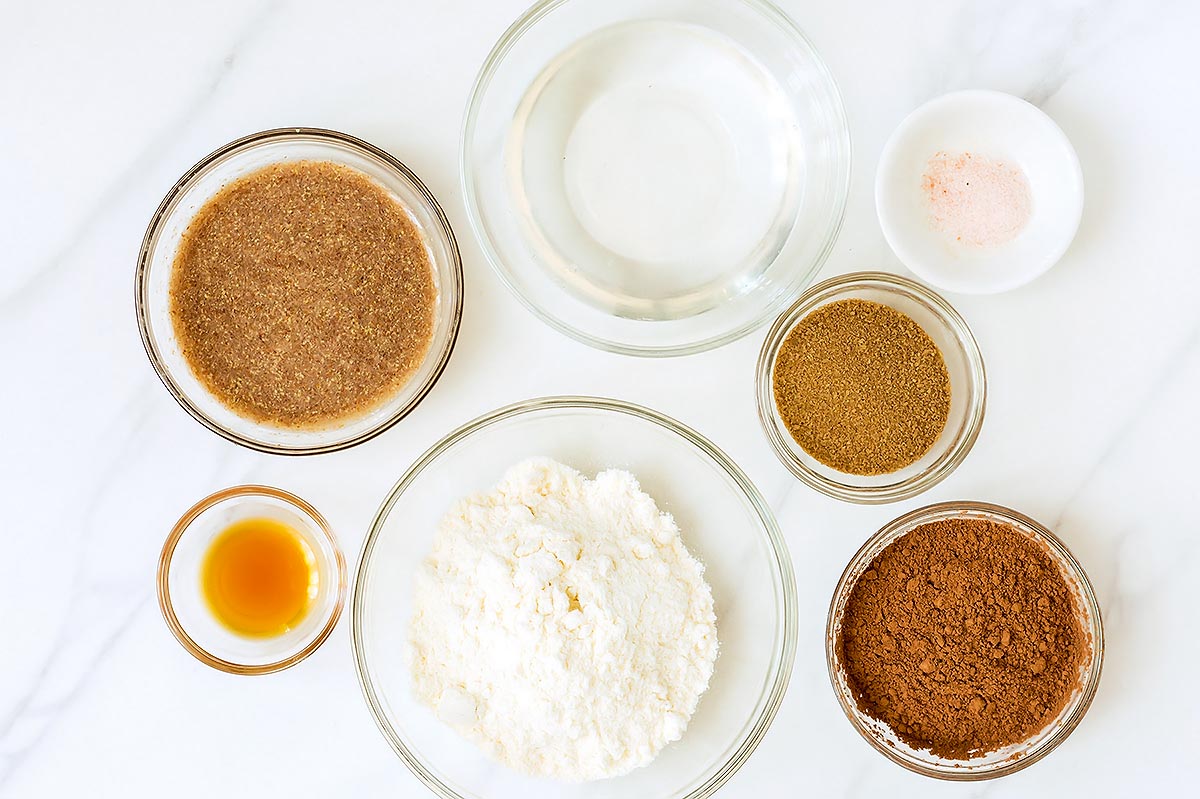 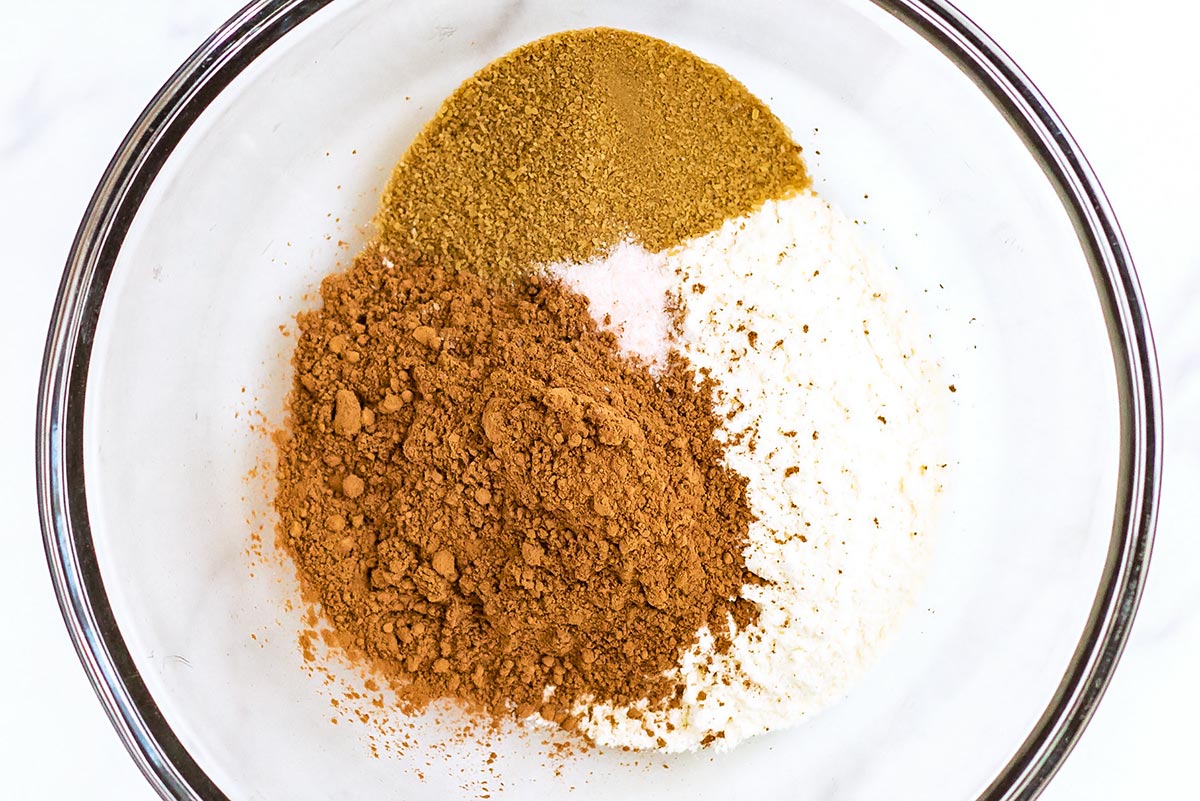 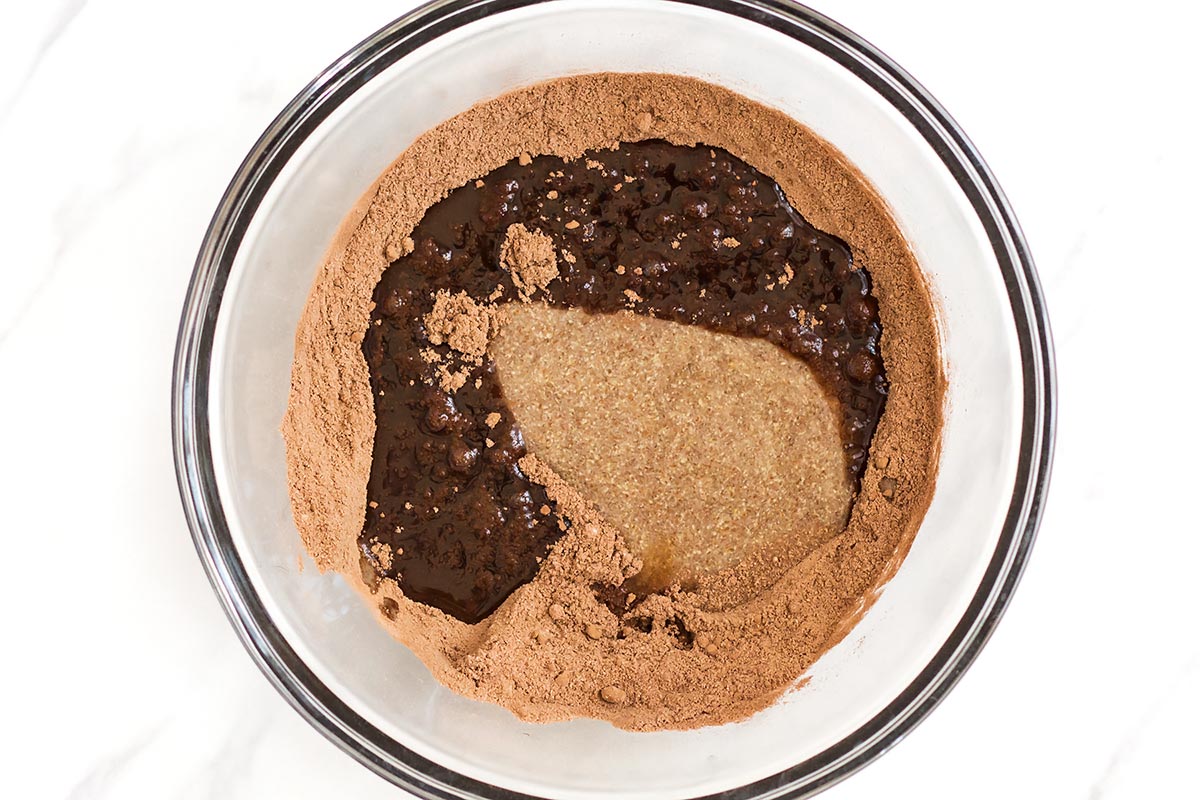 What is Coconut Flour?

Coconut flour is a popular flour for gluten free, low carb, and keto diets because it has fewer carbs than wheat flour and no gluten. It is produced from coconut pulp (a by-product from making coconut milk) that has been dried and ground into a fine flour. This flour has a much more fragrant and interesting taste than wheat flour making it an excellent choice for dessert recipes.

Coconut flour is quite popular for gluten free baking, so you should be able to find it at the grocery store or your favourite bulk food store. It comes in much smaller bags than wheat flour, which is a good thing because coconut flour doesn't stay fresh as long. If you have coconut flour and don't think you will be able to use it before it goes off, you can simply place it in the freezer to hold. Once frozen, it barely needs any time to thaw. 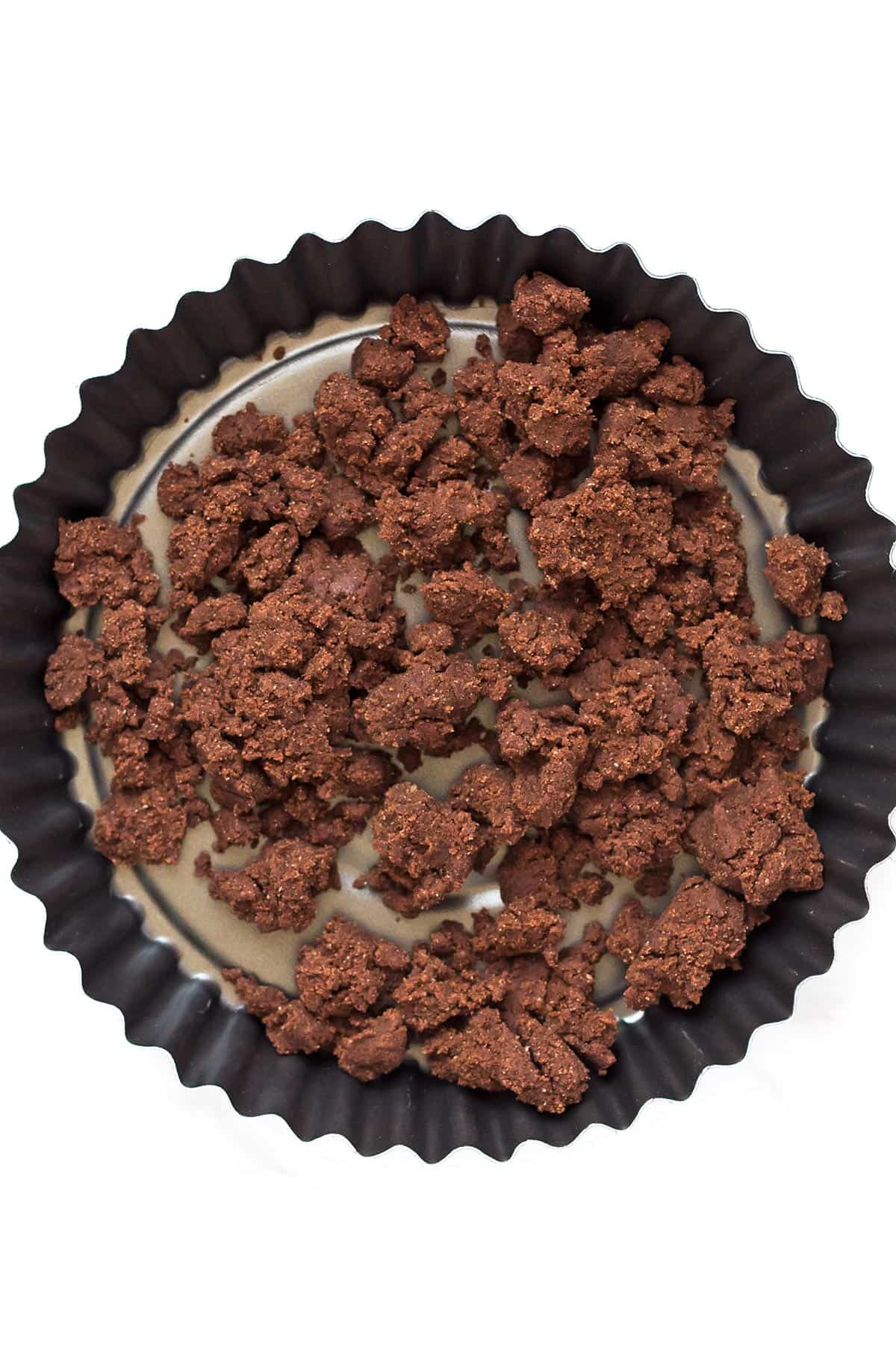 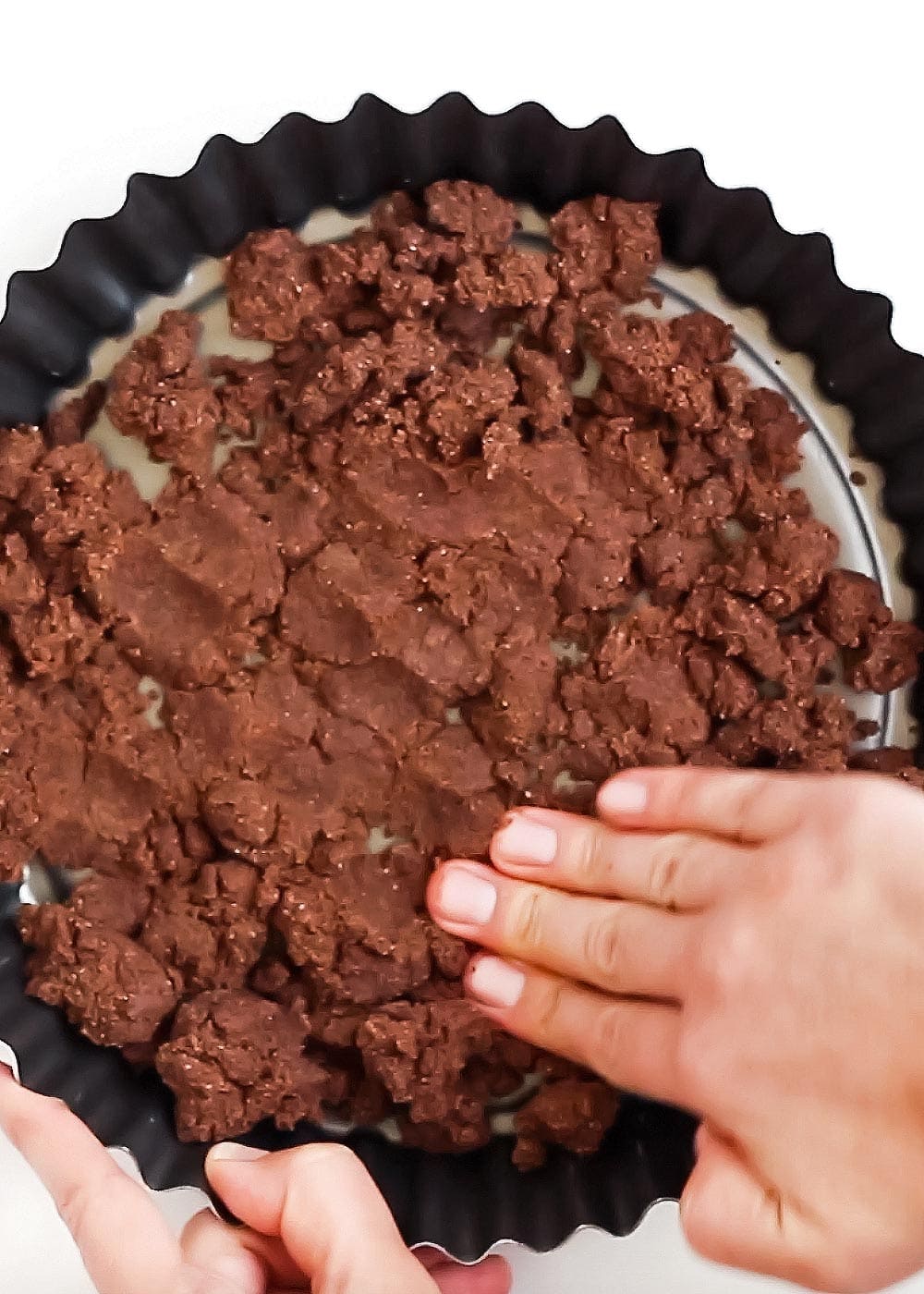 What Types of Fillings Can I Add to this Gluten Free Crust?

You can add a wide variety of fillings to this gluten free crust, no matter whether they require baking or not. If adding a no bake filling, simply prepare it as you would normally and pour it into your cooled baked crust.

If you are adding a filling that requires baking, you still shouldn't add it until after your crust is baked and cooled. However, you will be returning the crust to the oven with the filling to bake until set. The filling should be enough to cushion the crust from the heat of the oven, but feel free to cover the edges with foil or a crust protector shield if they are starting to turn too dark. 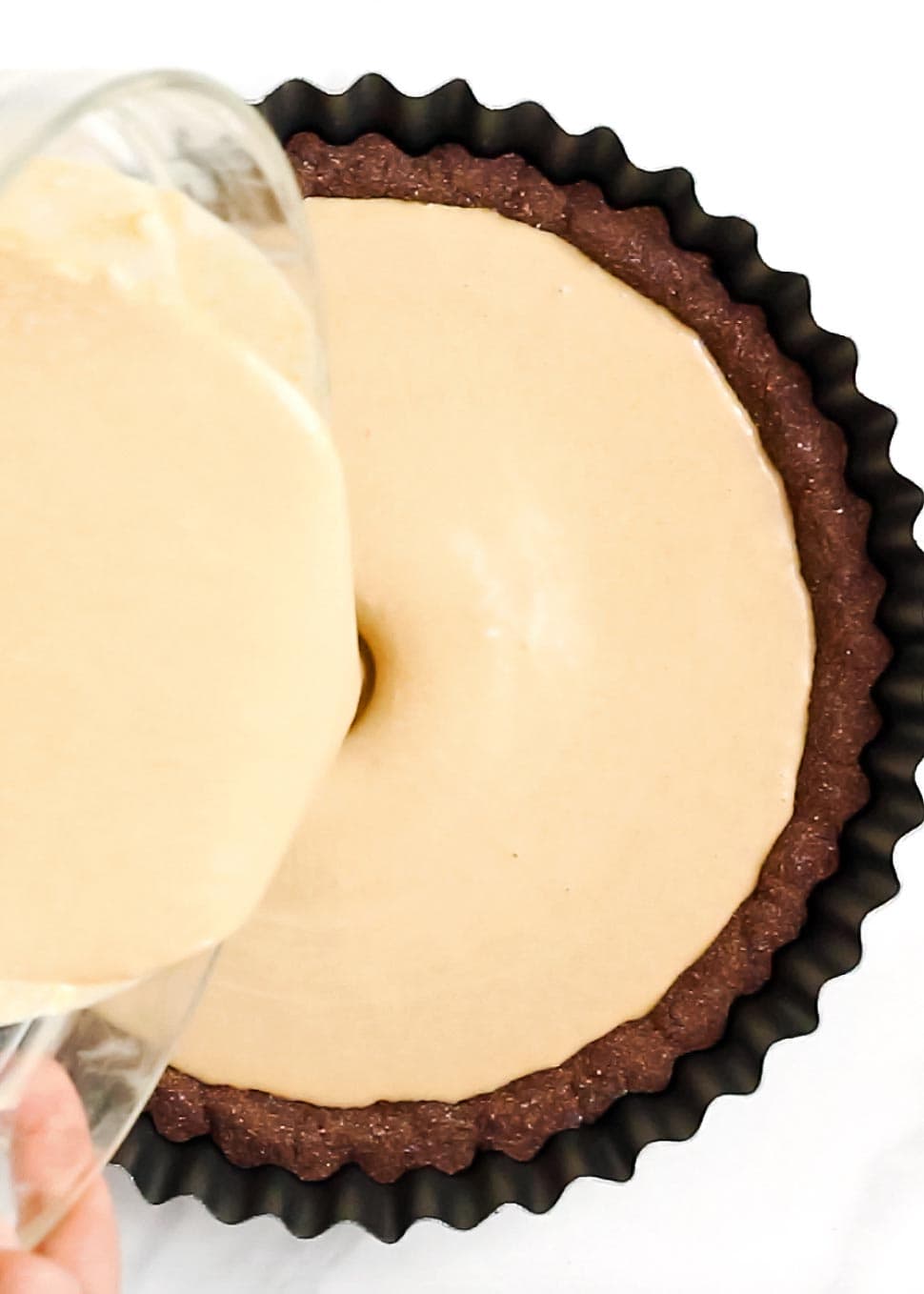 If desired, you could fill this gluten free crust with your favourite pumpkin pie mixture for a dish perfect for Thanksgiving or Halloween. You could even add bright and zingy lemon curd and meringue for a chocolaty take on lemon meringue pie. It would also be excellent for a chocolate cream pie base involving vegan chocolate pudding and coconut whipped cream with gluten free chocolate shavings.

If you have a filling that you love but wouldn't pair as well with chocolate, you could try this coconut flour pie crust recipe instead. It is very similar to this chocolate version, except that it doesn't have the cocoa powder. 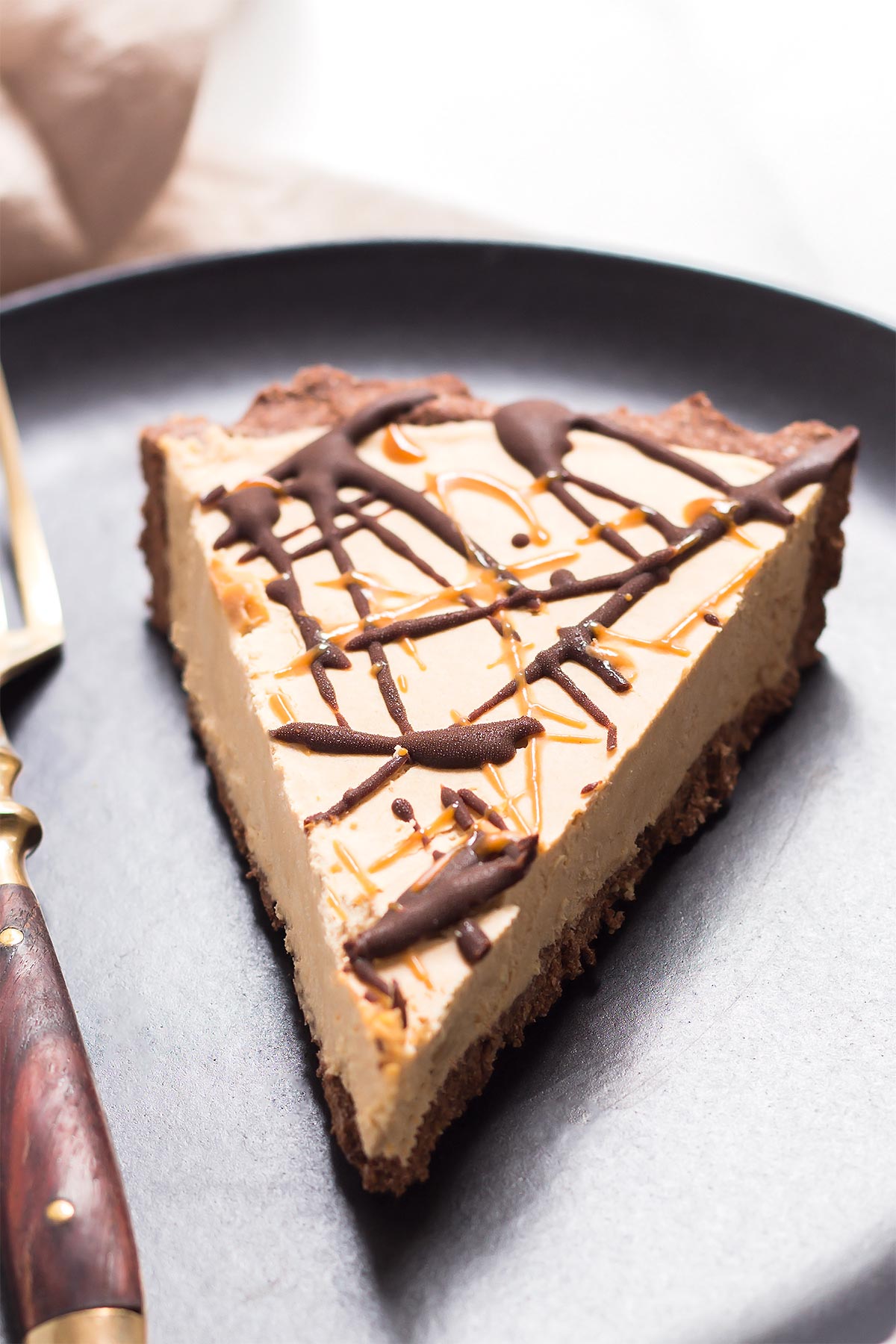 Can I Make this Crust in Advance?

Yes, you definitely can! Simply follow the recipe through baking and allow to cool completely. Next, you can wrap the gluten free crust thoroughly with plastic wrap or place in a sealable bag until ready to use. The crust should keep fresh for up to 3 days like this. If you leave it any longer, the oils in the dough may soften the crust so that you don't have the same crispness.

If desired, you could freeze the baked gluten free crust as well. In this case, you may want to bake your crust in foil pie plates so that you can keep your regular ones free for other baking. Simply place the entire shell with the pie plate in an airtight container or sealable freezer bag and freeze until ready to use.

The crust should keep for a few months in the freezer, but the flavours will deteriorate over time so it will be best to use it within the first 3 months. Before using your gluten free pastry, just thaw it before filling it with your favourite vegan, gluten-free, or paleo fillings. 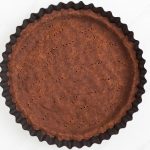 This gluten free pie crust comprises of coconut flour and cocoa powder, resulting in a chocolate base for all your favourite fillings. It is the perfect low carb pastry to serve all of your vegan, keto, or gluten-intolerant friends and family.