These coconut brownies consist of a rich chocolate chip brownie base layered with a sweet and decadent coconut macaroon topping. Reminiscent of a Mounds bar (or Bounty bar in Canada + Europe) this recipe is a coconut lovers dream. 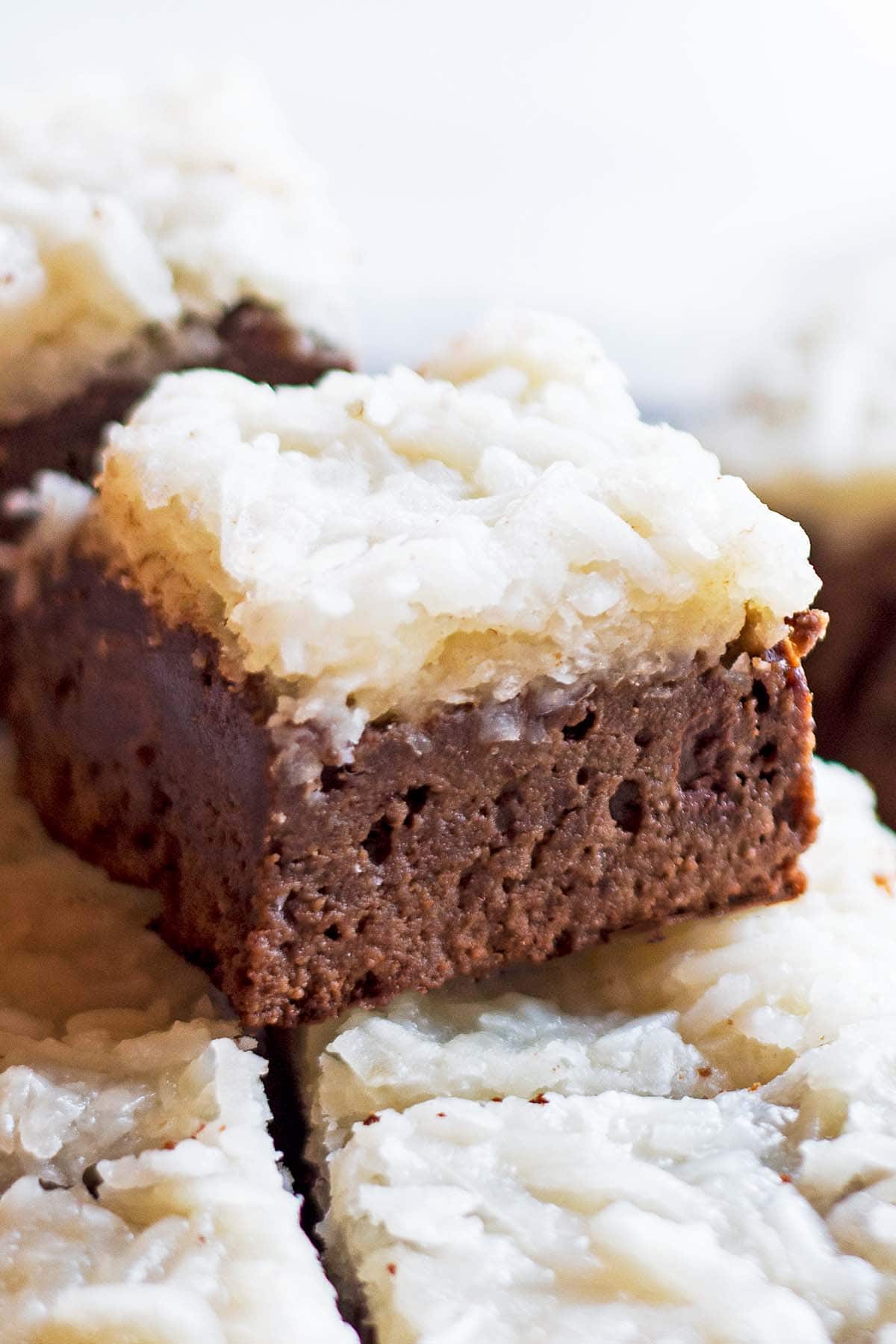 While traveling long-term in Southeast Asia, I was so happy to finally have an oven again during our time in Bali. However, since we only spent one month there, I didn't want to stock up on too many ingredients that we might not use up. So instead of buying all purpose flour, baking powder, and other things needed for from-scratch baking, I resorted to cake mixes from the box.

The only two cake mix options that seemed familiar to me were Vanilla Butter Cake and Chocolate Chip Brownies. I also tried a few Indonesian-style mixes, but they seem to make drier and less sweet types of cake. Some of the local cake flavors were quite interesting. Green Pandan-flavored cake stood out the most to me. 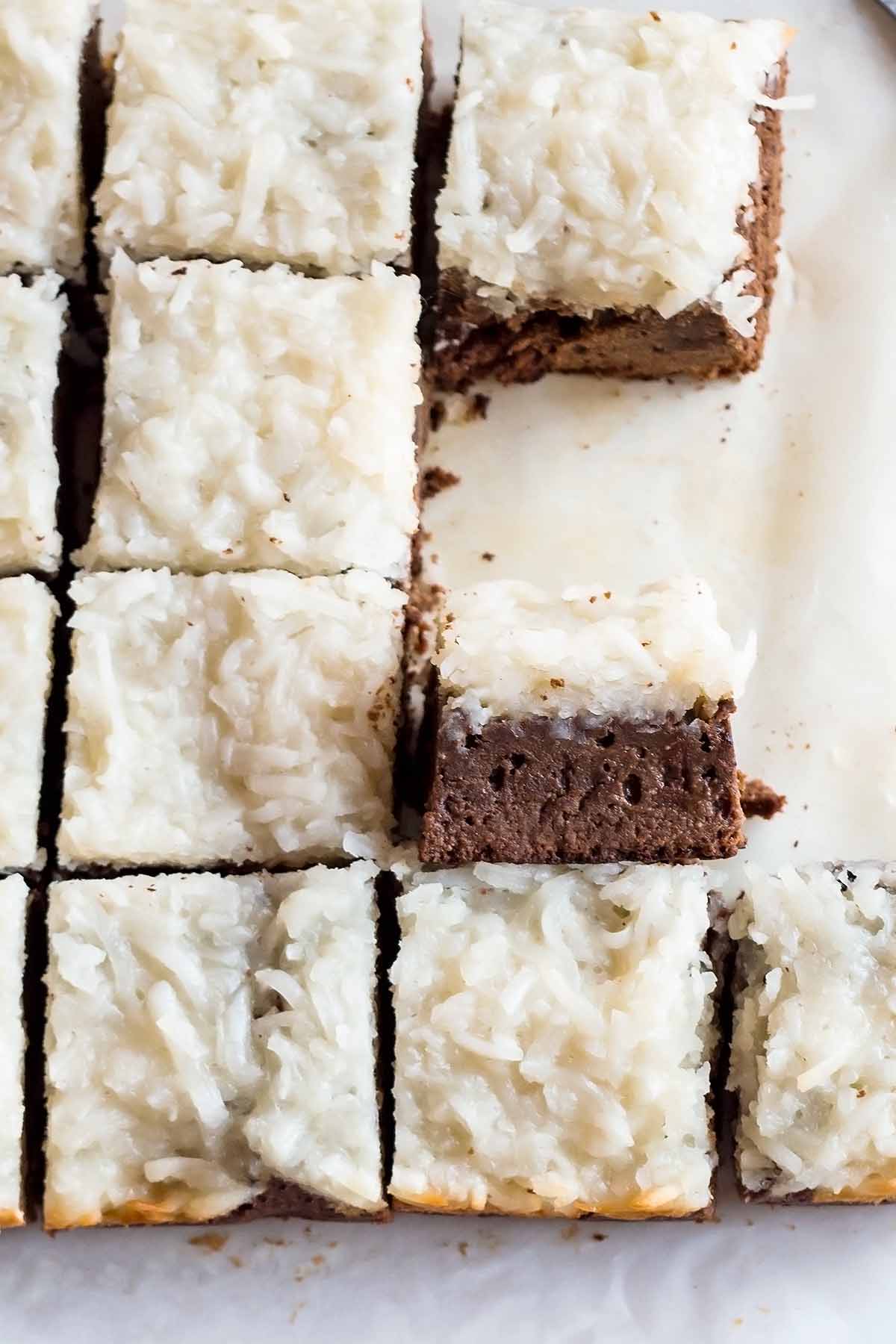 Another widely available ingredient all over South-East Asia is coconut. I had already tried for myself a combination of brownie mix and coconut with Brownie Macaroons. They turned out quite good (aside from the chilli-and-coconut fail), but I had yet another combination idea.

Rich and chewy chocolate chip brownies with a sweet and decadently grated coconut macaroon topping. Many recipes for a macaroon topping that I found online required evaporated milk or sweetened condensed milk. While those are widely available around Asia, I didn't have any at home and the house was quite a ways out of the city. As such, we only went grocery shopping once a week. 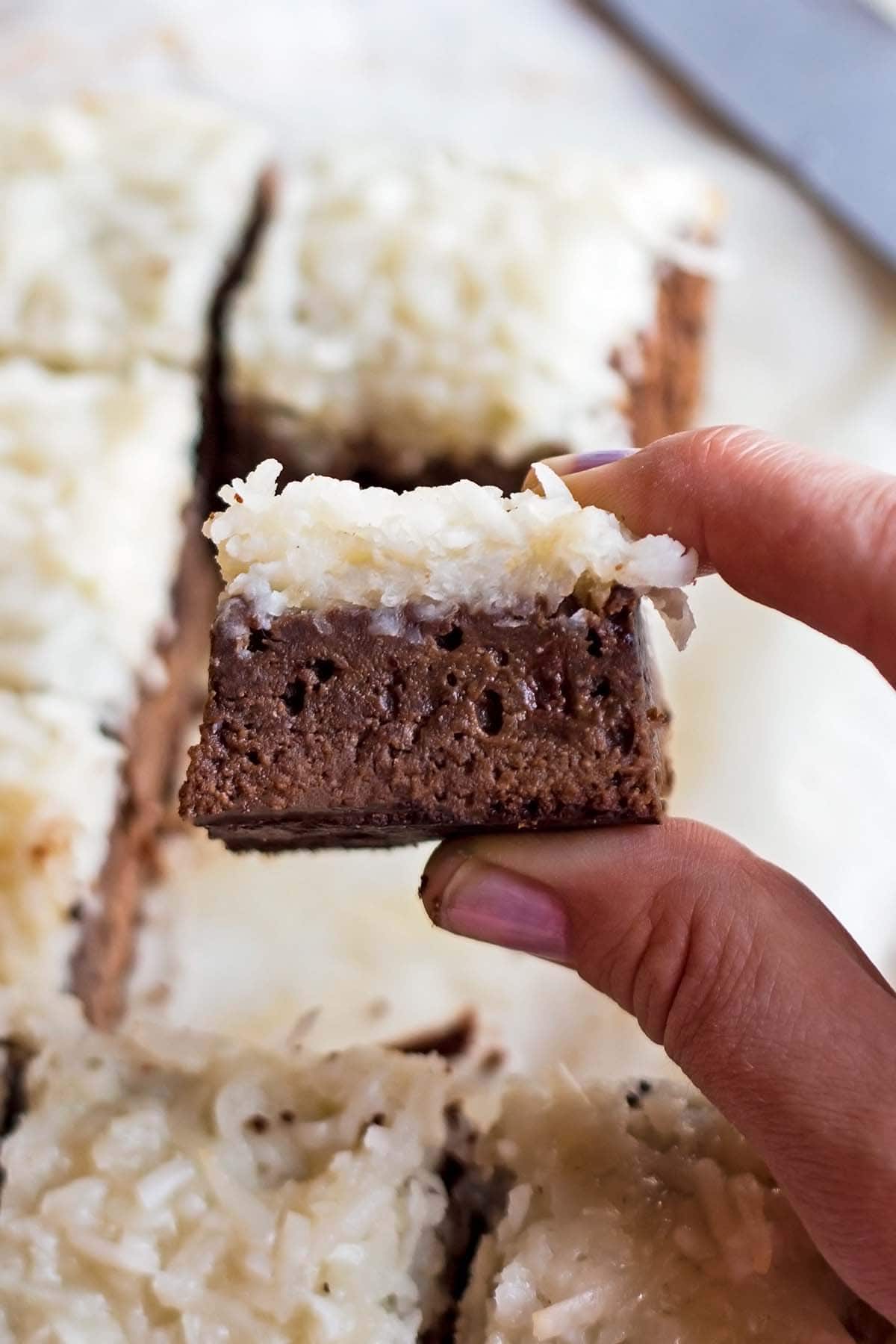 On to the Recipe

Finally though, I found a recipe that used a mixture of egg whites and sugar with salt and vanilla together with the grated coconut. The recipe calls for sweetened coconut, however, I freshly grated the coconut (the only packaged grated coconut I could find was chilli-flavored) so it was unsweetened and worked just as well.

You can use a regular brownie mix or your favorite from scratch recipe for fudgy brownies for a 8 or 9" pan. I've only tried the macaroon topping on regular flour brownies so far (like these fudgy brownies made with unsweetened dark chocolate). But I think it should work just as well on my gluten free coconut flour or almond flour brownie recipes, since they all bake for a similar amount of time.

If your brownie mix or batter doesn't include chocolate chips, you can spread a handful of semi-sweet chocolate chips over the brownie batter after filling into the prepared pan. Or leave them out if you prefer.

How to Make Coconut Stuffed Brownies 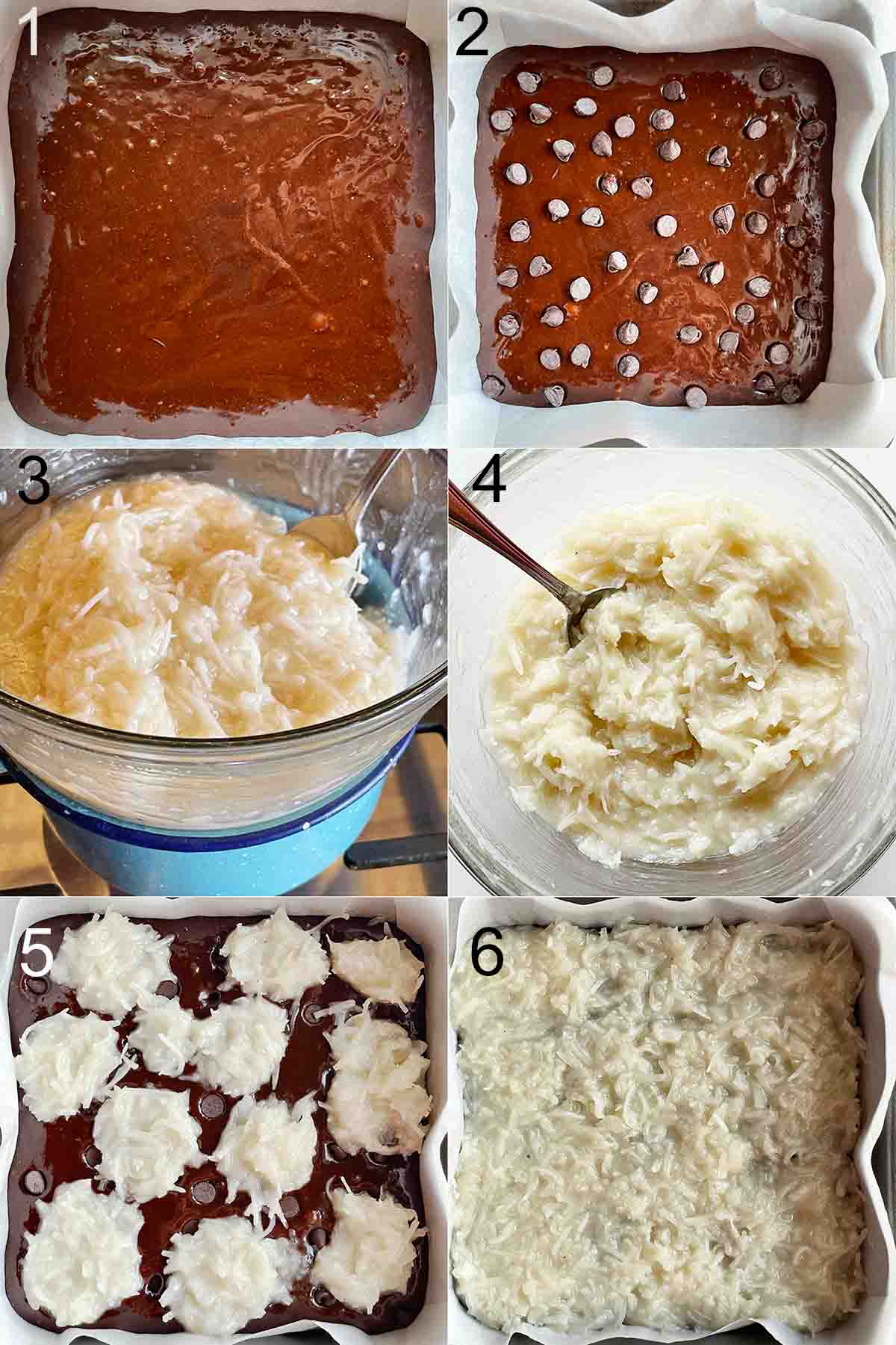 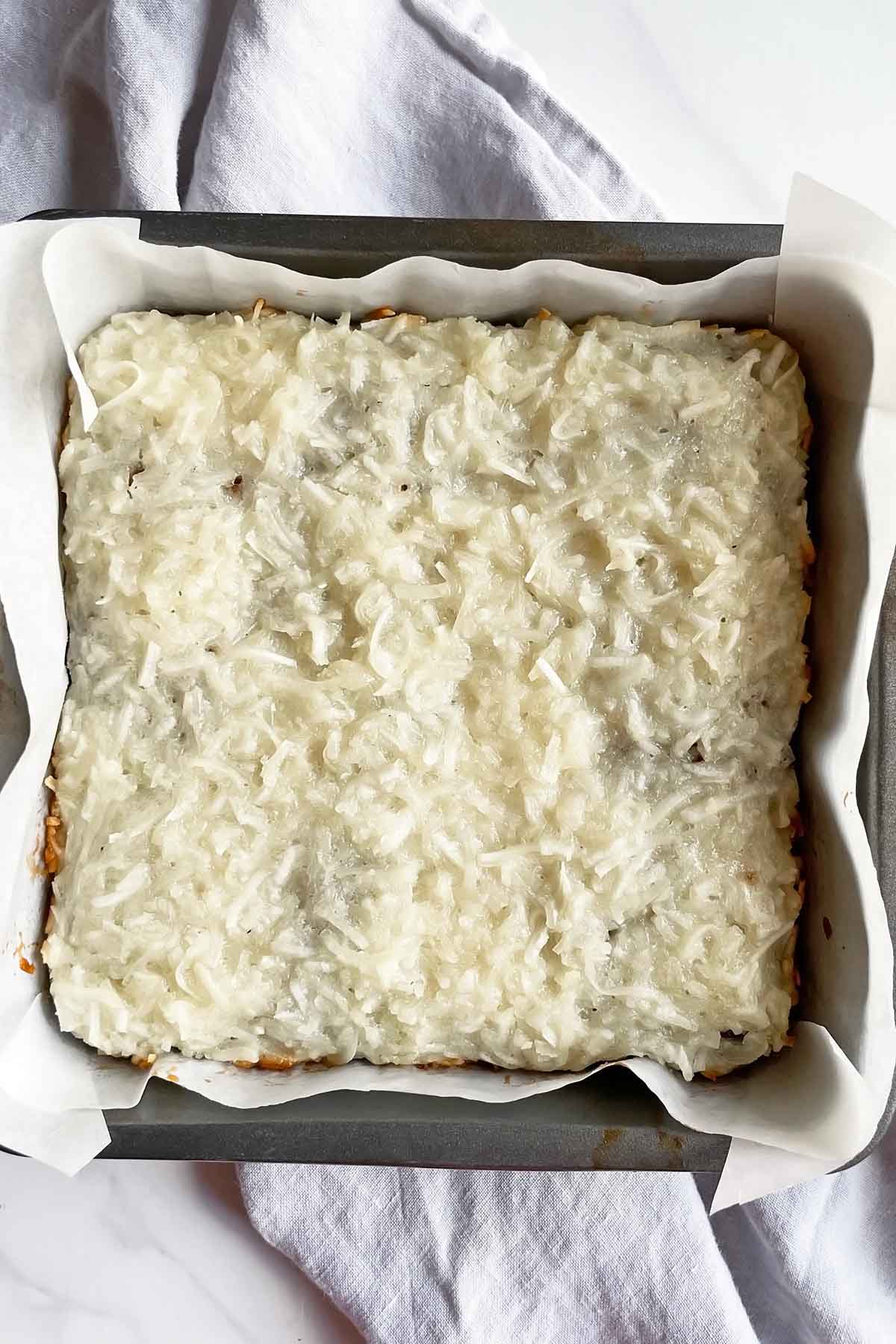 The macaroon topping is moist and chewy at room temperature and I had a hard time cutting the finished chocolate coconut brownies cleanly. I therefore recommend cutting these Coconut Macaroon Brownies when chilled, as it is much easier and allows for clean edges.

Store the finished chewy brownies in the fridge for 3-5 days in an airtight container or the baking dish with a lid or other cover. 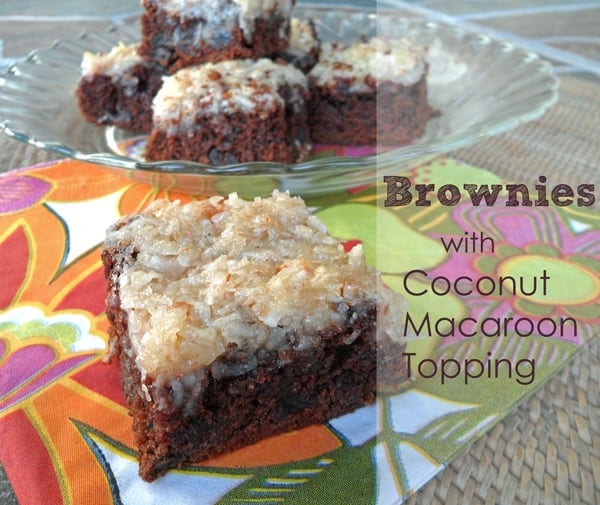 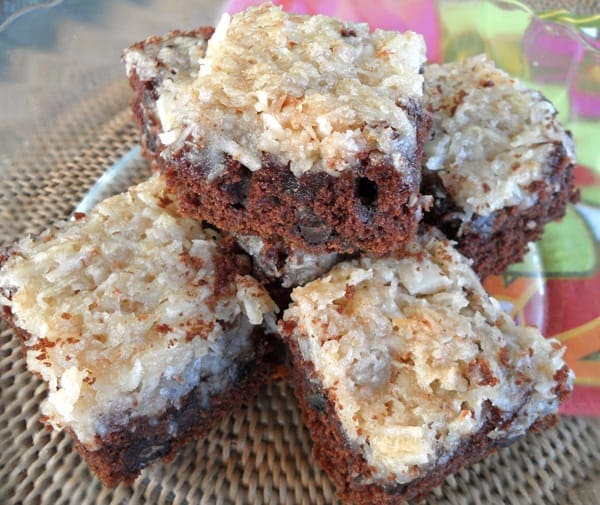 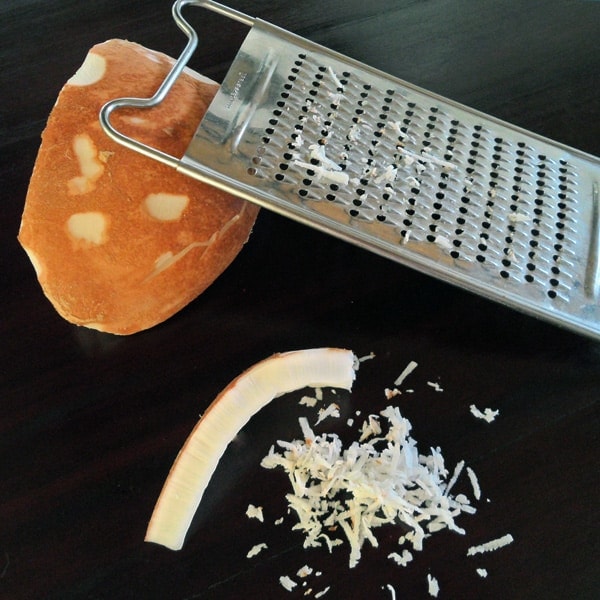 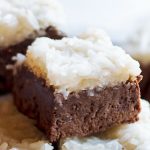